Motorcycle fuel injection systems are very similar to auto fuel injection systems. Basically, it is a pulsed preassure spray of fuel into the cumbustion chamber. The systems tend to use a traditional low pressure rail configuration. Although motorcycle systems tend to be open looped (exept BMW) they can have other high performance advantages like sequential injector firing, multi-hole injectors, and 32-bit processors.

Most motorcycles currently use open loop systems. An open loop system is basically a system without feedback adjustment. The system does not make any adjustments if the fuel mixture is not burning well. Thus, a system can run rich or lean at any given time with no correction. These systems may or may not have an oxygen sensor, but this is for another feature.

A motorcycle with a closed loop system will usually have a caytalitic converter like a car. An narrow band oxygen sensor up stream of the catalizer senses unburned oxygen and sends a signal to the ECU that will allow the ecu to correct the mixture for the next firing. If a catalizer is place on a system unable to correct mixture, eventually the exaust gasses will go out of permissable range of the catalizer and the catalizer will get overloaded and fail.

Why Adjustment is Necessary

Stock bikes need to be re-jetted or mapped to get maximum power or efficency. Bikes are designed with fuel systems that are compromised so that they can pass noise, emissions, and economy standards around the world. This, not to mention all of the different gasoline formulas available. Once these factors are worked out, then they power is maximized within those constraints.

This graph clearly show that any manufacturer is going to build a system that provides a lean mixture for fuel economy, or just slightly rich for minumum emissions, but far from the rich mixture neccessary for maximum power. 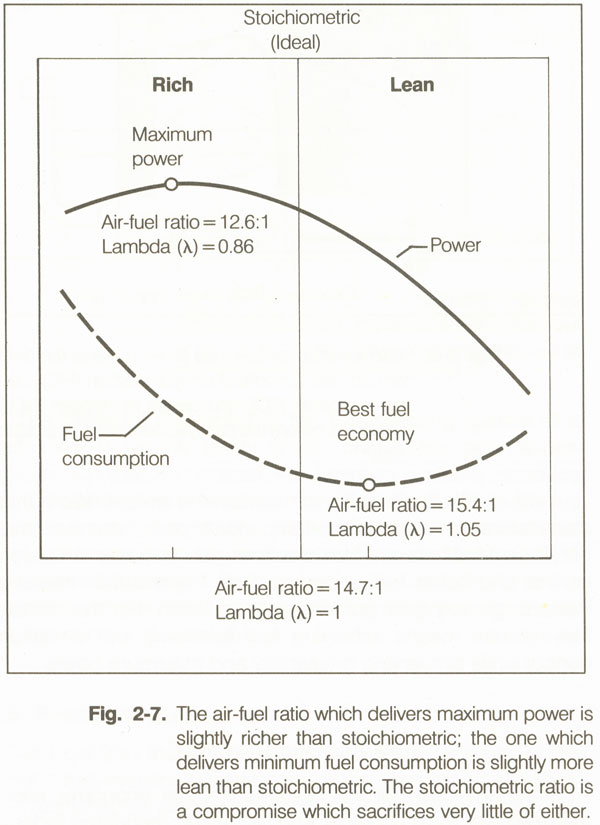 Exhaust, intake, and other power enhancing modifications usually contribute to an even leaner mixture.

Even bikes with closed loop injection systems will need to be adjusted for maximum power. These systems are programed to produce a mixture that is perfect for the catalizer to clean. 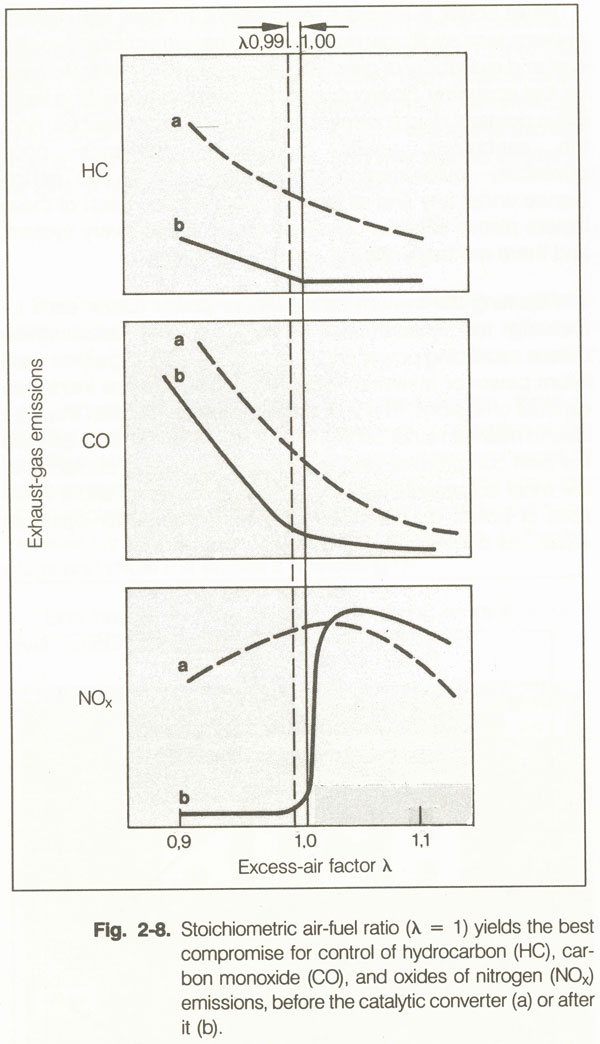 A custom map can be made by using a chasis dynamometer. This tool measures torque at the rear wheel at various RPM. An exaust gas anylizer is also used to quicken the process, but the goal is to make as much torque as possible at a given RPM regardless of gas output.

A mobile EGA can be used on the bike for real time readings and logging of exaust gases. This is a nice tool for the home or small time mechanic, but does nothing to ensure maximum torque, just burn. This technique also suffers from instrument lag time for readings.

Usually, on high performance machines the lean conditions programed into the EMS are most pronounced a between 0 and 20 percent throttle opening and in lower rpm's. Goverment test procedures usually point to where the mixture will get leanest. Since the tests are rarely conducted at WOT and near redline, the system is probably running best in that range.

Dynojet's press on the need for a custom map.

The custom map is next. The standard maps that Dynojet and other manufacturers provide are created using what ever bike happed to be available at the time, in whatever state of tune it happened to be in. By paying a specialty shop, Like Factory Pro to create a custom map for my exact bike, the power is then optimized and throttle response improves greatly.

This map created for me was with stock unmodified exhaust and stock air filter with the fire screen removed. PAIR and SMOG systems have been removed as well. Otherwise, the bike's powerplant remains stock. The bike was dynoed with Mobil 1 EP 15W-50 lubrication (reducing power just slightly), a 520 chain (raising power slightly) and watter wetter coolant (cooling the engine more).

Notice that the bike, stock, was mapped too lean to about 40% throttle, then gets too rich to 100% throttle. This trend will be seen on most bikes. Why? Simple, the bike is lean at first so that the bike will pass emmisions regulations and testing, then it gets rich so that the bike will run well enough, under hard use, if the end user puts an aftermarket pipe on the bike. This is what a power commander will fix.

HERE is the map file.

This is what the Dynojet map looked like. Pretty crazy. You can tell that they just hooked it to the computer and let 'er rip. There is no way a quality map could look like this.

When a custom map needs to be changed

A custom map needs to be changed when: