Recently, I needed to do a bunch of scanning of old photographs for my wife's mother's memorial. I had always been disatisfied with the totally inadequate performance of my HP d135's scanning capabilities. This soley due to the garbage software it comes with. The windows software is almost worse, and an aftermarket alternative software that I had tried (Art-Scan 5) always seemed to crash things or work funky.

So I say, "That's it. I'm buying a new scanner!" I had owned another HP Scanjet scanner in the past, but I had also been really let down by the software, so I decided that HP was out. I knew that Epson had fairly decent software as my scanner at work had that, but it seemed that Epson was really falling behind in the market these days.

After shopping it through, I decided on a Canon Canoscan 8600F. A $170 scanner that promises slide and negative scanning (surely not as nice as a real slide scanner, but something).

This desision was made for 3 reasons:

My prayer was that the software would be at least much better than the HP garbage. I was rewarded. I am not claiming that the Canon ScanGear software is the best scanning software in the world, but at least I can say that it is truely useful for REAL world scanning. It is a little clunky, but with a little more polish, it could be really good. One really handy thing it lacks is the ability to see dropped pixels during levels adjustment, like photoshop has.

I had been told in the past not to do any image processing in scanning software and to do everything in Photoshop. This seemed to make sense at the time and continued to. Photoshop is the best and most robust software available for image processing. It should be able to work with anything. A pixel is a pixel, and it's color value could be shifted at any time. Right? Wrong.

As I have learned more about digital photography and using Camera RAW images, I have learned far more about how we get these pixels, from the hardware side of things. I have also learned more about the JPEGs and BMPs and what is done to generated them. The goal of this test was to see if we could essentially treat the scanning software like it was ACR, and produce a far superior image for later processing.

This image was chosen because it really sucked, quality wise. It is my wife on a horse as a child. The image is damaged and faded. I scanned it in otherwise similar scaling for all the tests. 600 pixels by 430 pixels, 206% scaling with a heavy crop.

This image was scanned in, as is. No adjusments were made before getting it into Photoshop. 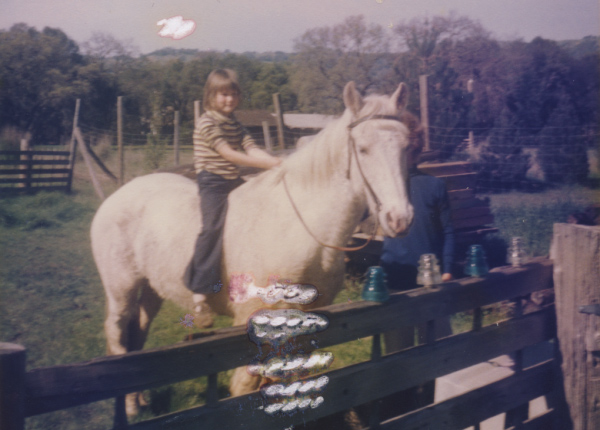 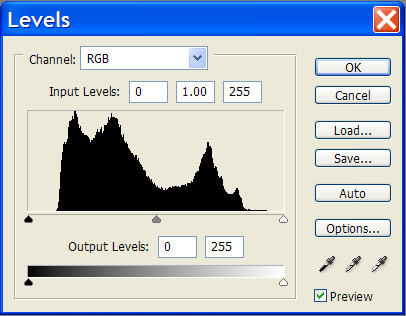 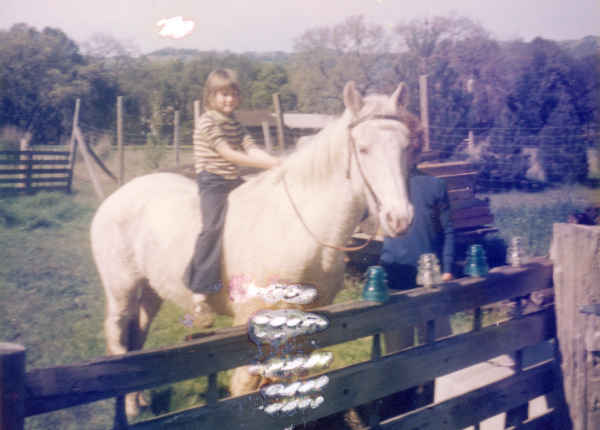 Note that the image has nothing left. Any work from here will degrade the image. 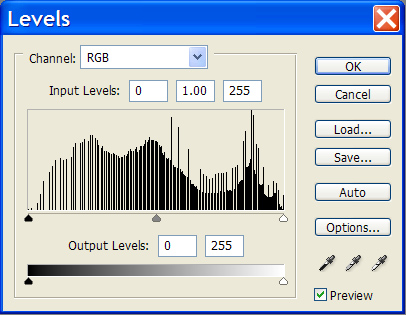 For this image, I used the levels adjustment in the Canon scanning software. 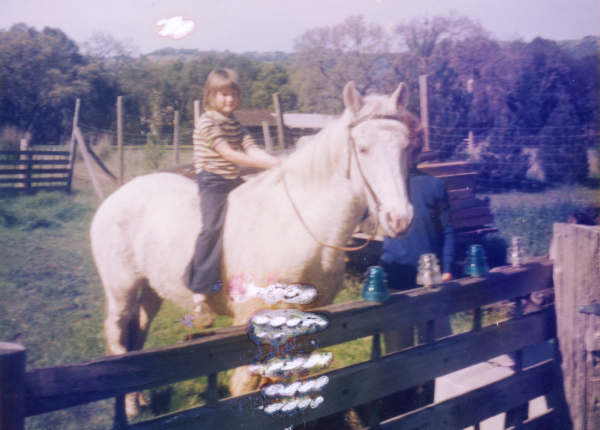 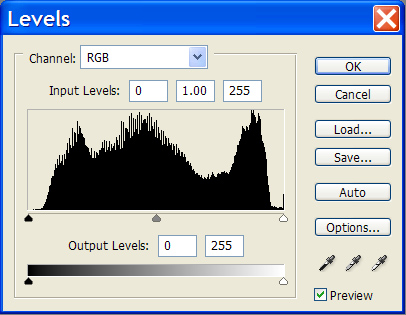 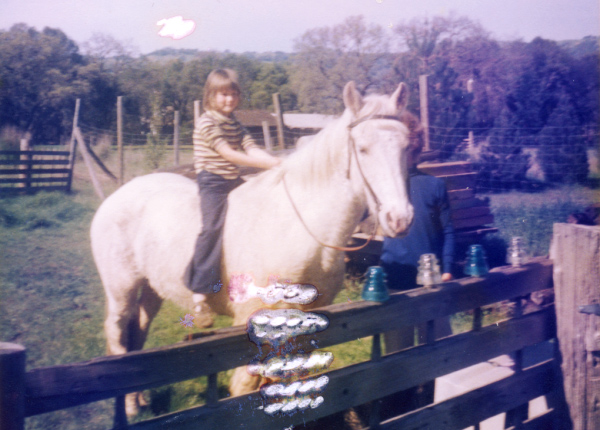 Note how much image is intact compared to not using the scanner adjustment. We can do some work on this image. 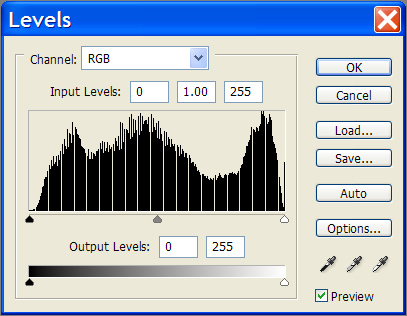 This is the business. Again. Image was sampled from the scanner at 600x430 pixels (48 bit) with some processing at the scanner, some process in photoshop (levels again). Then converted down to 8 bits per channel to be comparable to the others. Note how much is left to work with. 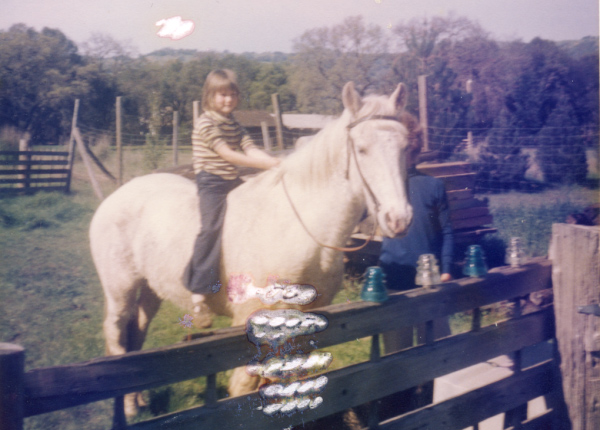 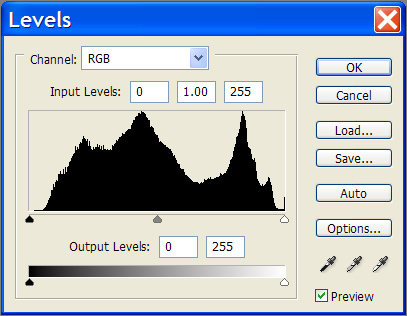 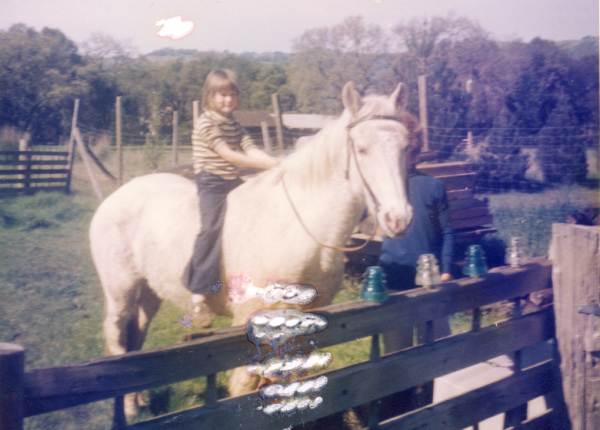 Note how robust this image is! We can do a lot to this image without killing it. 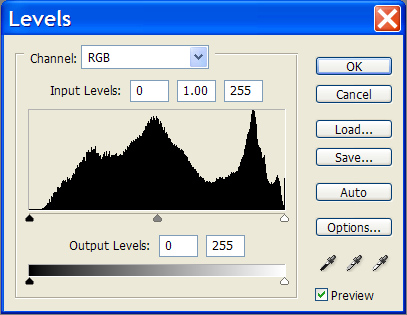 Lesson learned. Always use scanner corrections at 48 bit. It really makes a difference.

Here is the fixed picture. I didn't go nuts with color correction, but at least it is now useable. 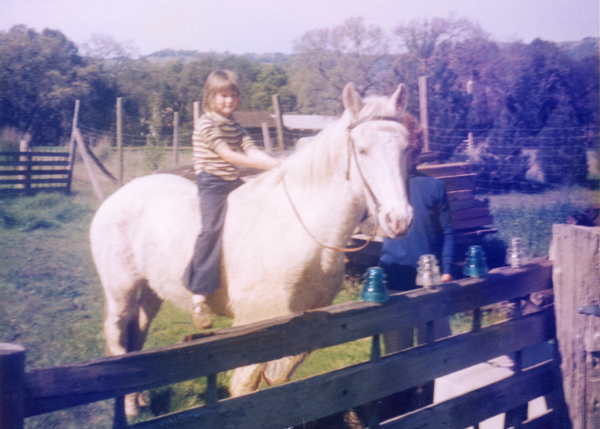