I have been trying to get down to only one mountain bike for a few years. For the past two, I was down to just my Intense 5.5 with a 36 Talas on the front. It's a great bike, but since I ride it so hard, and I'm so busy, I always ended up making rushed repairs just before a ride. This was not cool.

So, I put together a single speed as a back-up/winter bike. This was to reduce wear on my nice bike and reduce my workload. After running the single speed mountain bike in Marin, CA for the past 4 months, I have decided that it may not be for me. It is a very interesting way to ride, but it really leaves me wanting when the terrain gets fairly steep and soft, and when the downhill gets up to real speeds. I figure that I could use a little bit of range from center to make things a little more fun while keeping my drive train rock solid for winter riding.

While practicing for the Sea Otter Downhill race in 2006, I got to talking to a pro rider that was running a four or six speed setup. I realized that I really had to be a little more creative when thinking about what is possible when setting up a bike for specific targets. That minimal gearing setup has stuck in the back of my mind untill now. It may be perfect for what I need.

For this reason, a 27-speed mountain bike really only has about 12 or 15 correct gear choices. Other choices may be possible, but result in such a horrible chain line as to be inefficent or destructive. A 1X9 is really just a 5 speed with 4 additional gears that are completely destructive or inefficent to use.

An interesting artical on this topic has been written by Matt D. Kidd, N. E. Loch, R. L. Reuben.

Even software has been developed for figuring things out.

While ANY standard cassette hub can be used for doing this, one hub is really better than all the rest. The Hadley Single Speed Disc hub. This is one of the finest hubs availble in terms of quality and configurations, but it has some other things going for it that are perfect for this project. Another good option is the Profile 6-Speed Disc hub. It will also fit six 8-speed cogs. A Chris King SS will only fit four. 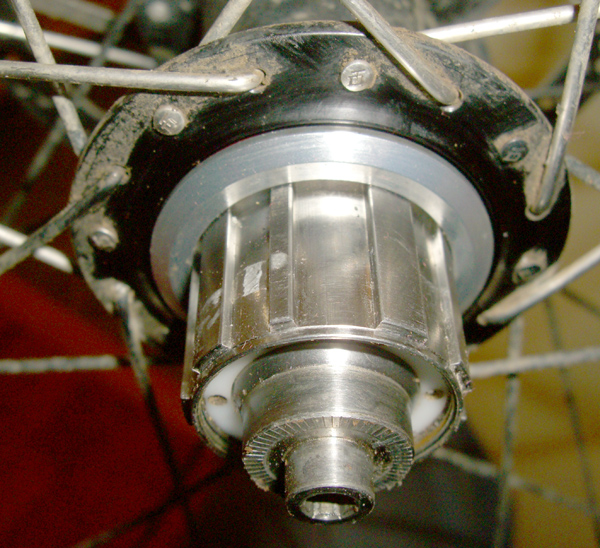 I had done some research about how many gears I could fit on this hub before I spent the money on parts. I was pretty positive that I would be able to fit five speeds on this hub. I even spoke directly with Mike Hadley, the hubs namesake. He said five. When I went to assemble my cassette on the hub, I found that I could in fact fit six, 9-speed spaced, 9-speed width cogs on the cassette.

One of the decisions that needed to be made when assembling the needed parts for this project was weather it would be a 8-speed or 9-speed chained and spaced setup.

The advantage to an 8-speed configuration is that the chain and sprockets are slightly more robust that with the nine. Shifting tends to be slightly better as well since it takes a lot more disruption to derail the chain on an 8 speed setup.

The advantage to a 9-speed configuration is that 9-speed chains and sprockets are far more available than 8-speed parts. This applys to shifters as well, a very important consideration. Most importantly though, given the same number of gears, the 9-speed spacing keeps a better chain line.

In the end, I decided to go with a 9-speed configuraion since I try to source my bikes parts so that I can go into any bike store anywhere and get replacement parts in stock and cheap. I will use a Dura-Ace 9 speed chain.

Do not attempt to make a cassette using a stack of single speed cogs. That is not only expensive, but will result in poor shifting performance. Modern cassetts have a complicated array of ramps and shapes to help the chain move about the cluster. When we make a 6 speed cassette, we will have larger jumps between gears, increasing our need for shifting help.

It is best to canibalize a constructed cassette for this. When choosing what cassettes to canibalize for this project, you mainly need to focus on whether it is 8 or 9 speed and that it is possible to break apart. Lots of the higher end cassets will be built around a carrier, these will not be suitable.

If you take some time and do a little math and some thinking, you can get a good idea of what gears or range you will need for your cassette. Although I did do this, in the end, I built the widest range I could given my six choices.

Remember that rear derailure choice defines the largest possible cog on the cassette. Since I am building with a Shimano 105 short cage derailure, I needed to keep my max sprocket to 27 teeth or less. 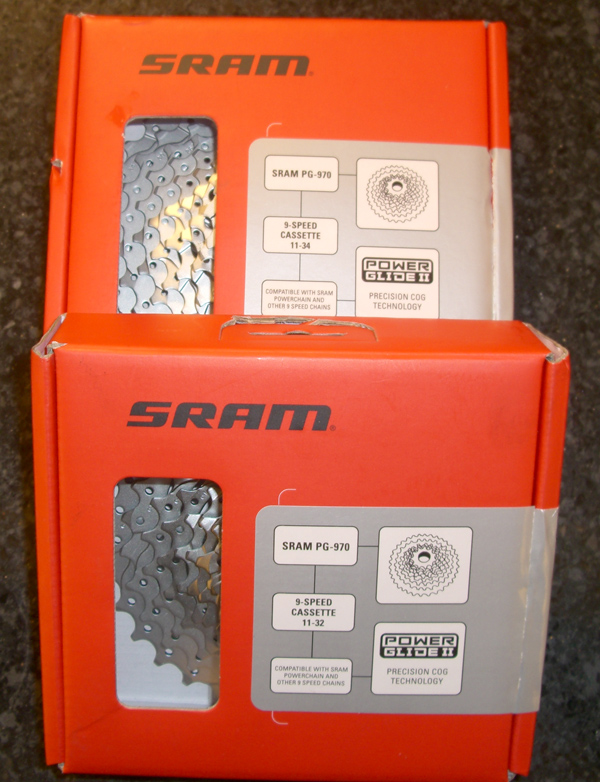 The spline view and the allen screw. 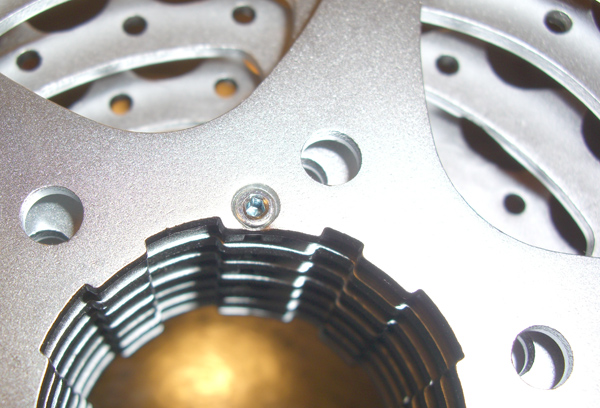 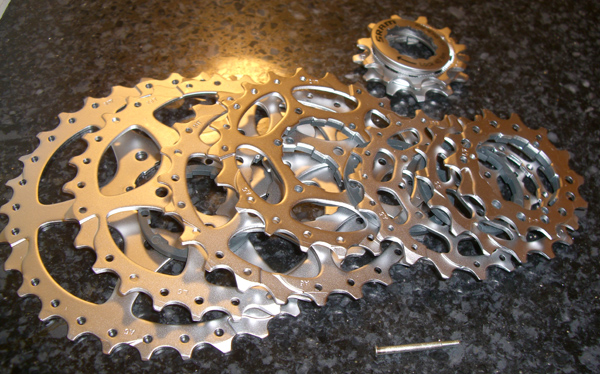 To use the 11 tooth cog on this cassette and 9 speed spacing, about 0.036" needs to be surface ground from its integrated expanded spacer. This is because I am not using the cog that initially mated to this one. This is also necessary with a Shimano cassette.

For 8 speed spacing, instead of grinding the cog, an approximately 0.010" shim washer will be added to it. Peskey little details that bikes work really good.

The surface ground cog. This cog is not usable without doing this. 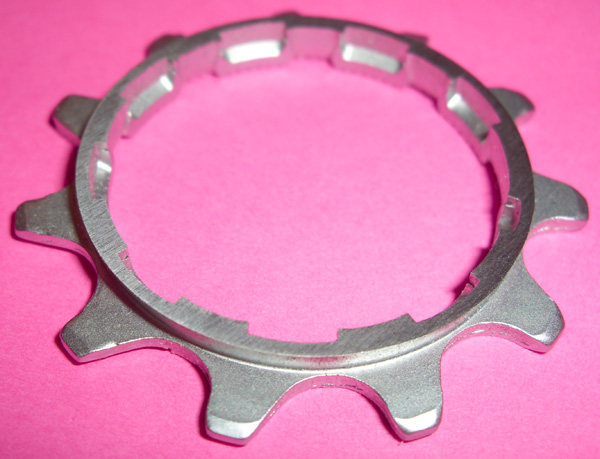 This is what the cassette looks like (11 tooth cog not modified yet): 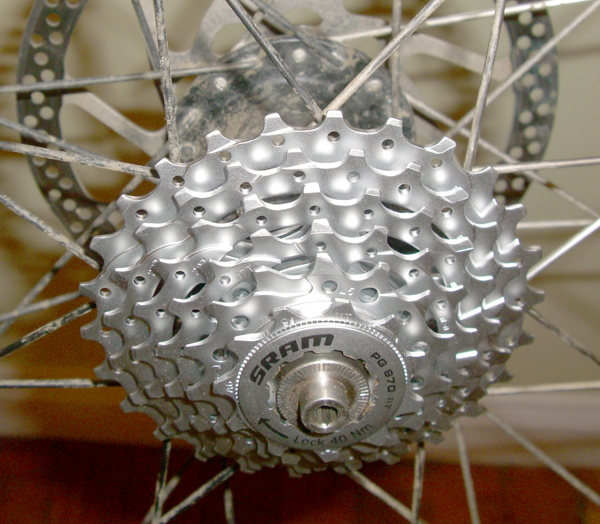 It seems that the center of the cassette stack makes for a rear chainline of 52mm, a fairly common measure for singlespeed MTBs. Pay attention to the chain line section.
Note that the stack looks fairly straight. This was done for an even distribution of gears. For better shifting on the smaller cogs, I would have placed smaller gaps at that end. 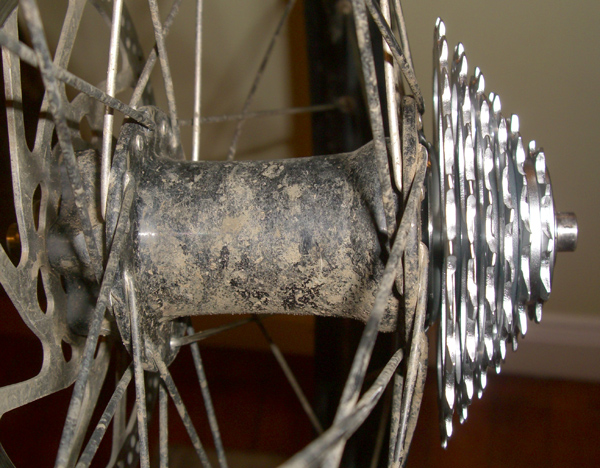 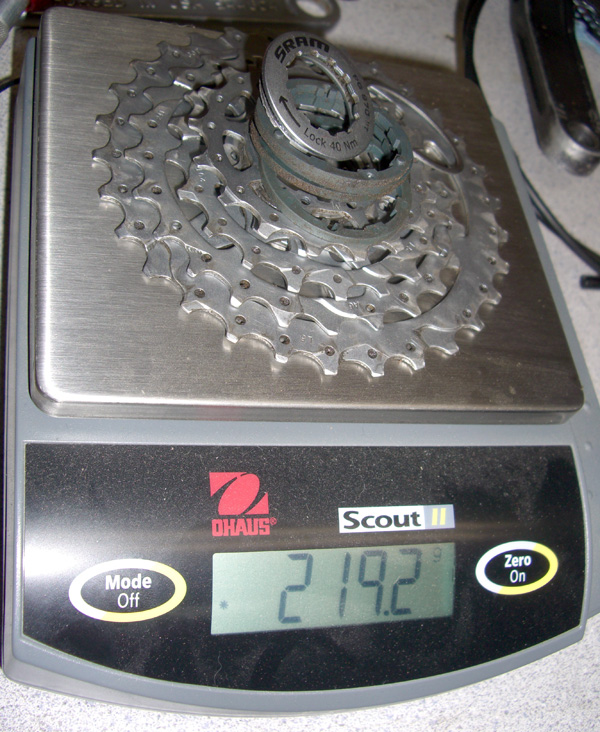 Shifters define the indexing of the rear derailure. Your shifter must match your choice of 8 or 9-speeds.

Just for fun, I figured that I would try a Shimano Saint (SL-M800) shifter for this project.

I'm not exaclty happy with the ergonomics of the Saint shifter. It is very out of the way, which is nice, but it is kind of hard to get at when the going gets rough. I will try chainging it's position again, then switch to a Deore LX or Sram X-7 shifter.

The saint shifter gets in the way in this configuration. When postion was changed, It is very out of the way, but too much. It is very hard to downshift on the fly. 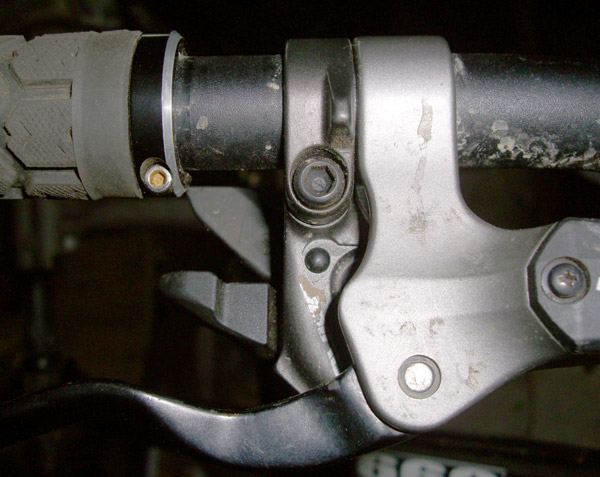 While any standard MTB derailure will work, I am choosing to run a short cage derailure since I will have only one front ring. The road rear derailures by shimano work just fine in the dirt. Shimano 105 Rear Derailleur RD-5600-SS. Shimano was my main choice for rear derailure since any Shimano road derailure is cross compatable with 9-spd mtb shifters and cassette spacing. This is an economy thing. I want to be able to use the most common parts available if I end up in a jam.

The 10spd 105 derailure limit screws were 'just' out of range for practical purposes. I had to swap screws. 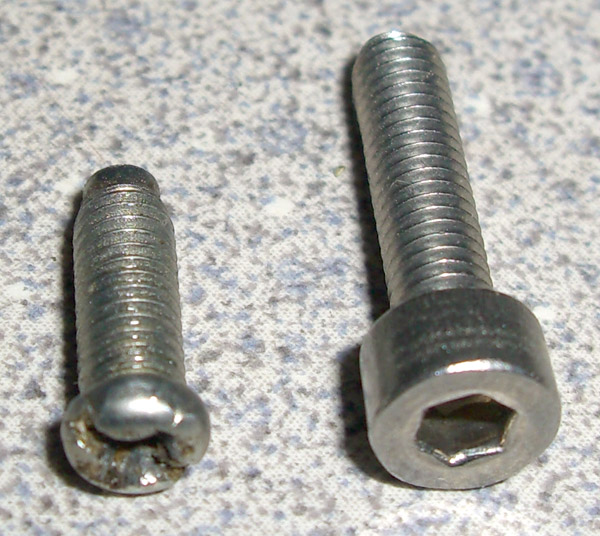 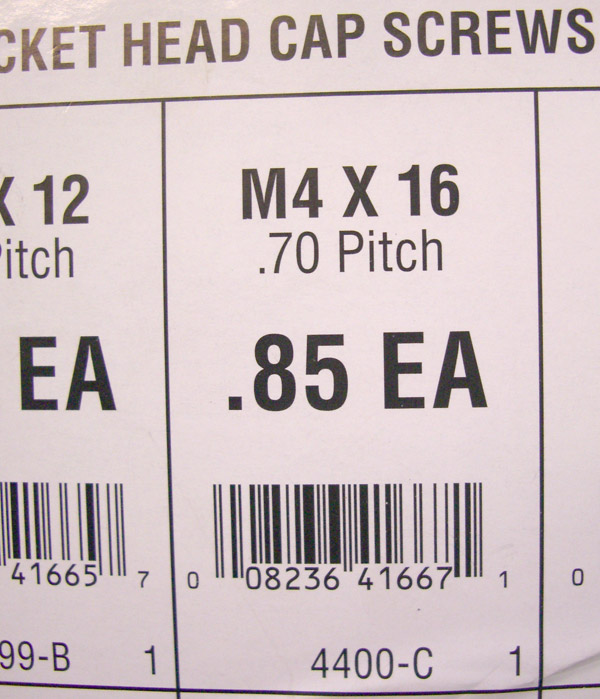 I ordered some specific size screws so that I can make this look more pro, but this is it for now. 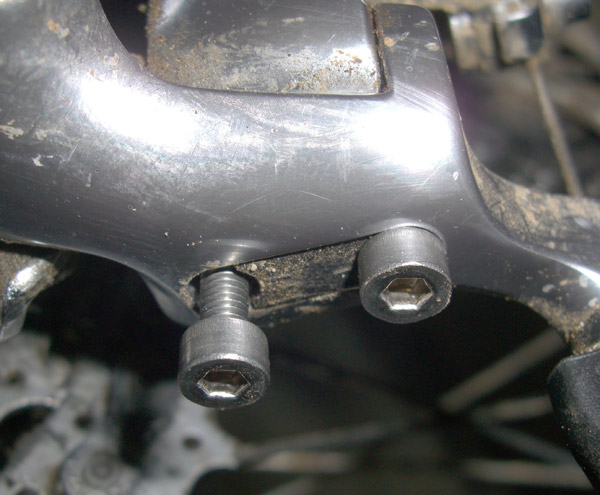 Option
If I had gone the SRAM route, I would have chosen the new 2007 X-9 Short Cage derailure.

Important note: SRAM road parts are not cross compatable with the off road line. Do not try to use a SRAM road rear derailure.

A chain guide is necessary to keep the chain in place up front. This is an important issue. 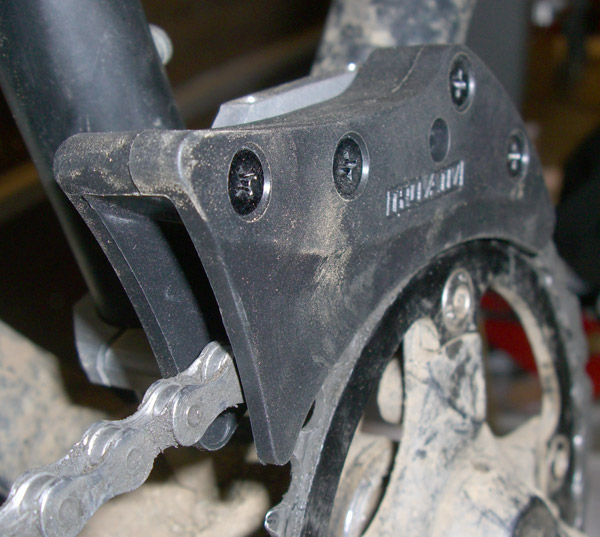 Aparently, the defacto standard for Singlespeed MTB chainline is 52mm. This is good because the Hadley cassette body seems perfectly centered about that if running a five speed drivetrain.

Standard front chain lines for 3 ring mtb are either 47.5mm or 50mm. For road (2 ring), track, and bmx, chainline is generally 43.5mm. Shimano Saint 150 uses a 57.5 chainline and Shimano DXR uses a 44mm chainline, all the rest of the HollowTech II MTB cranksets use a 50mm chainline.

I endeded up with a 45.8mm front chain line with a 113mm Shimano UN-73 bottom bracket and a White Industries ENO Crankset. This sucked. I really needed to bring the chainline out to about 51.5 to 52.0mm for the system to work best. For this reason, no spacers are used on the back side of the cassette. 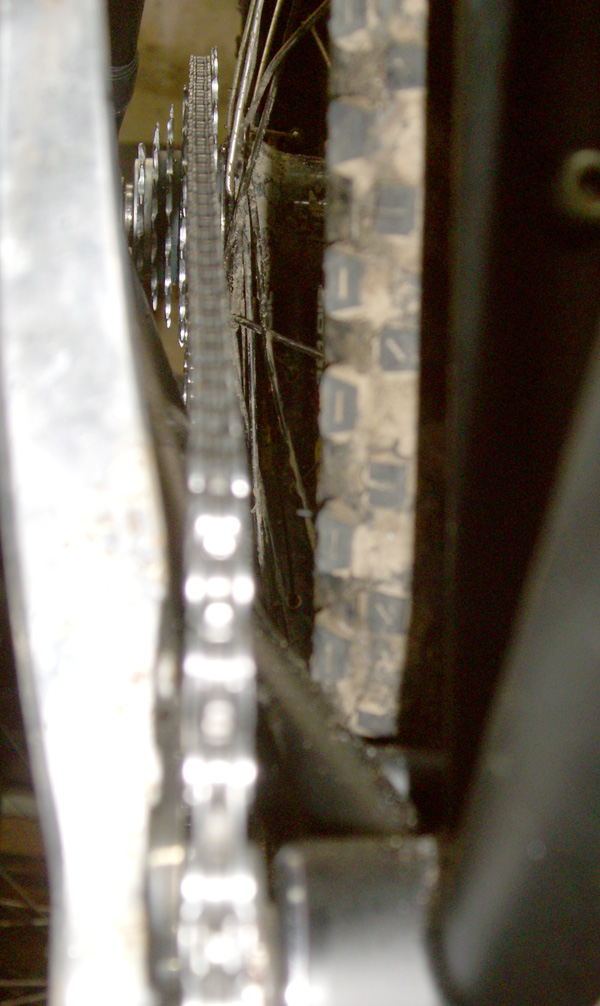 I had to change cranks to get my bike at least ready for a real test ride. Using a cheap Shimano Hollowtech crank with a chainring in the outermost postition and the same 113mm bottom bracket, I was able to get a usable chainline at about 51.5mm. I ordered a 122.5 and a 127.5mm bottom bracket so that I can use my lighter White Industies cranks. This probably means going to a Shimano UN53 bb, or a FSA 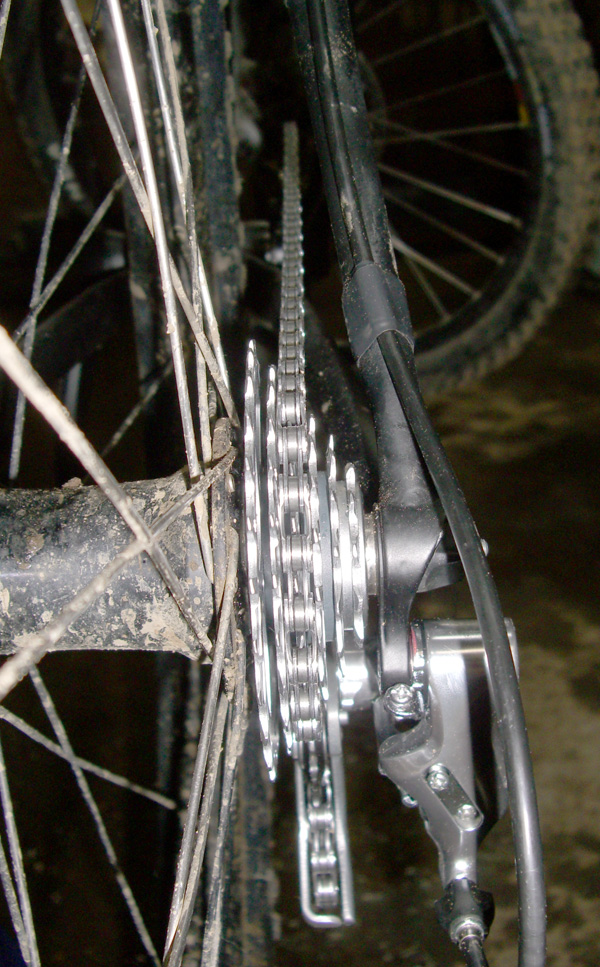 I fine tuned my cassette position by using a single Shimano 1mm 10 speed cassette shim behind the cassette. That's all the room I had. This picture shows the difference between that shim and a standard 2.5mm spacer.

The chain is almost perfectly centered on the cassette, just a touch toward the lower gears. 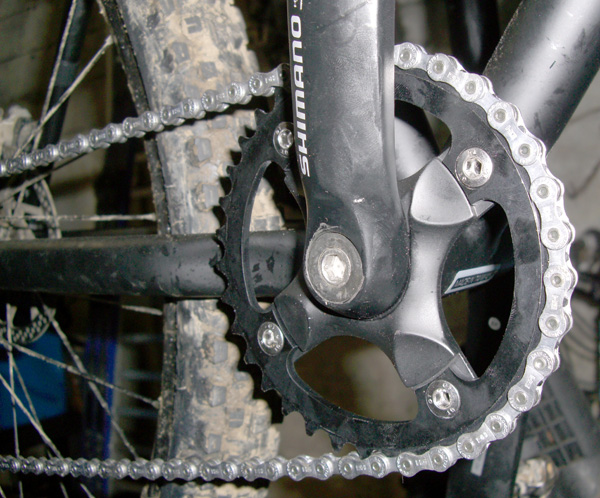 Note: I am starting to think that I need to bias my chainline more toward the lower gears. I spend very little time in the 11 tooth cog and spend quite a bit of time in my two lowest gears while climbing. A 50mm chain line may make more sense after all. The 11 tooth is critical at times, but only for a very small percentage of the ride.

Ride #1
As I rushed to get the chain line prepared in time for our regular Tuesday night ride, the weather developed into one of the biggest storms of the year so far. This was going to be a hell of a shake down ride: One of the shortest days of the year, in the dark, gail force winds, and blinding rain. 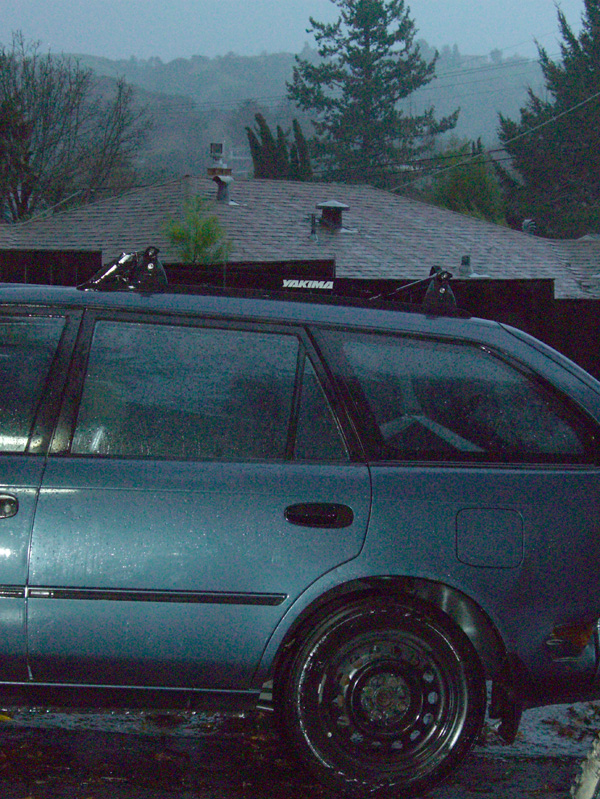 The bike worked flawlessly. The only thing I needed to do on the trail was tighten the headset.

The chain never even hinted at coming off the chainring, but to be honest, we were not getting up to such a speed in these conditions to really give the system a true test. It did work this time, though. That is a good sign.

The bike is similar to a singlespeed in terms of not having every gear option available, so a little pushing and spinning is involved, but it is so much nicer on climbs and especially on decents. Just more comfortable, faster, and more flexible.

Big problem...Chain came off. Fast stuff caused it to drop. Definately will need a chain retention device. I will make one.

Starting to think that six speeds is a bit much for a single front ring. I may have to go down to five speeds. I will need an even longer bottom bracket to do this. I have ordered a 122.5 and a 127.5 so that I can play around and see what works.

Did a great vacation poach on Mt. Tam. Big climb, super single track. the gearing is perfect. Really fun, but still work. Dropped the chain once, but I have come to terms with the fact that I need a chain guide. Really snappy feeling. 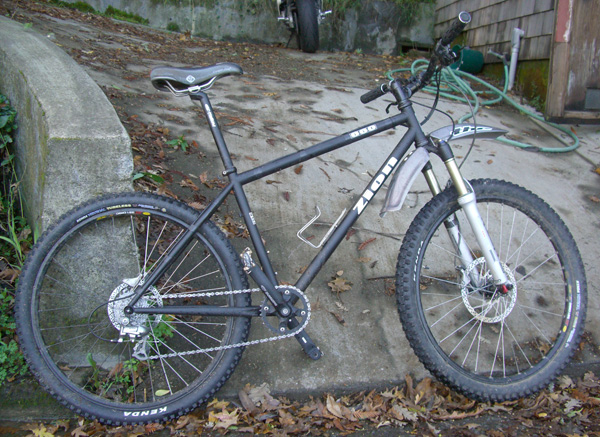 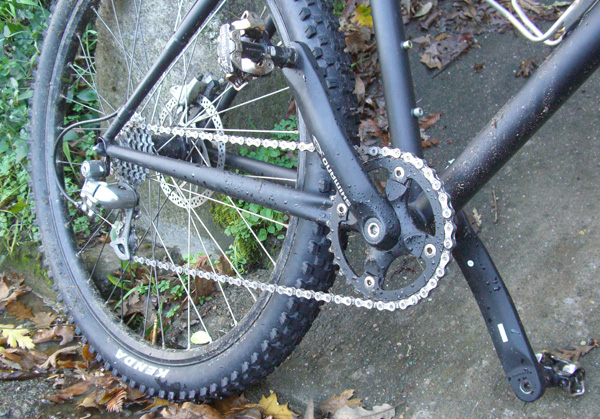 
A Tamarancho loop. Dropped a chain once again, but I was able to chase some fast fully geared guys both up and down the hill even after giving them a handicap. So, it works. All I need now are some parts and some time in the machine shop to make a chain guide. 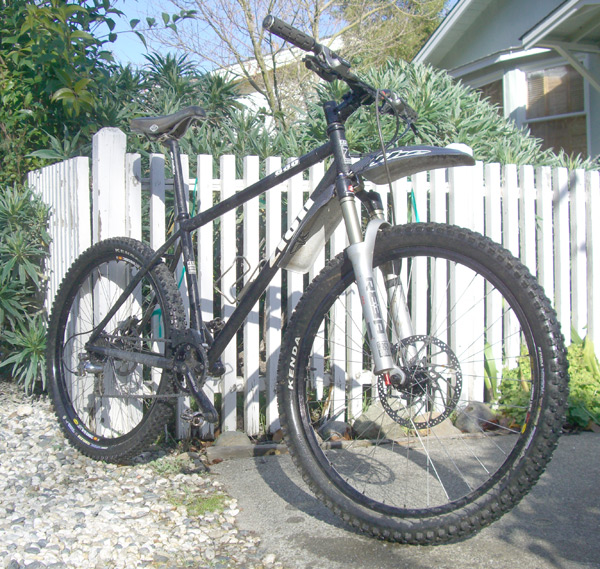