While a very strong quality wheel can be built with nothing but a light oil on the threads of the spokes, the differences when using a threadlocker are noticed well into the lifetime of the wheel. The advantages of using a threadlocker will be seen on both road and mountain wheels.

REASON #1
In time and with use, the oil that was initially on the spoke threads during the build will disipate and wash away. The resulting bare interface between stainless steel and aluminum or brass is able to corrode. This corrosion will work to lock the nipple in place, causing a rounded nipple face when an adjustment is attempted. This is especially noticable in coastal areas with a large about of salt and moisture in the environment. Threadlocker prevents corrosion in the thread by filling the gaps. The result is a fastener that requires the same brakeaway torque in several years as was needed hours after the build.

EXAMPLE
Among the many examples of this I can readily give is one where several road wheels that I had build in the early 1990's were due for new rims in 2005. These wheels had been build with very light spokes and aluminum nipples. When the wheels were build, only oil was used on the threads of the spokes. When I attempted to remove the nipples to swap in the new rims, the nipples were all frozen solid. I ended up having to cut out the spokes and replace them all in the new build. This would not have happened if a threadlocker had been used.

REASON #2
In the event that a rim must be ridden without a tire (blown sidewall or irreparable flat), the rim is cycled and abused in a way completely out of line with how the system was designed to be used. In this case, the rim changes shape quite a bit compared to with a tire and air. If mearly tension is used to keep the nipples of the spokes in place, this cycling of the shape will periodically release this tension, allowing the nipple to rotate and the wheel to slowly start to fall apart. This reduces the ride time available in a situation like this. A treadlocker will help the nipple stay in place even when tension is released dramatically over thousands of cycles.

EXAMPLES
This was experienced by me first hand back in 1996 when I blew a sidewall 12 miles into the San Juan Mountains outside Durango, CO. After putting a 3 inch slash accross the sidewall of my tire, I was forced to ride the rear rim over that 12 miles of singletrack to get to the closest road. This was back when I was still using oil on spoke threads. As I rode, I experienced the wheel slowly loosen up, wobble out, and eventually shatter. I got to the road just as the wheel had broken into two peices but was still rolling.

Recently, while racing the 2006 Downiville Downhill, after double flatting with only one tube, I was forced to ride my front rim through the lower 1/3 of the course. The wheel was ridden as hard as possible since it was race conditions. The difference with this wheel was that the nipples were mounted using Loctite 242. Amazingly, the wheel held up fine and was evenly perfectly true when checked after the finish line. 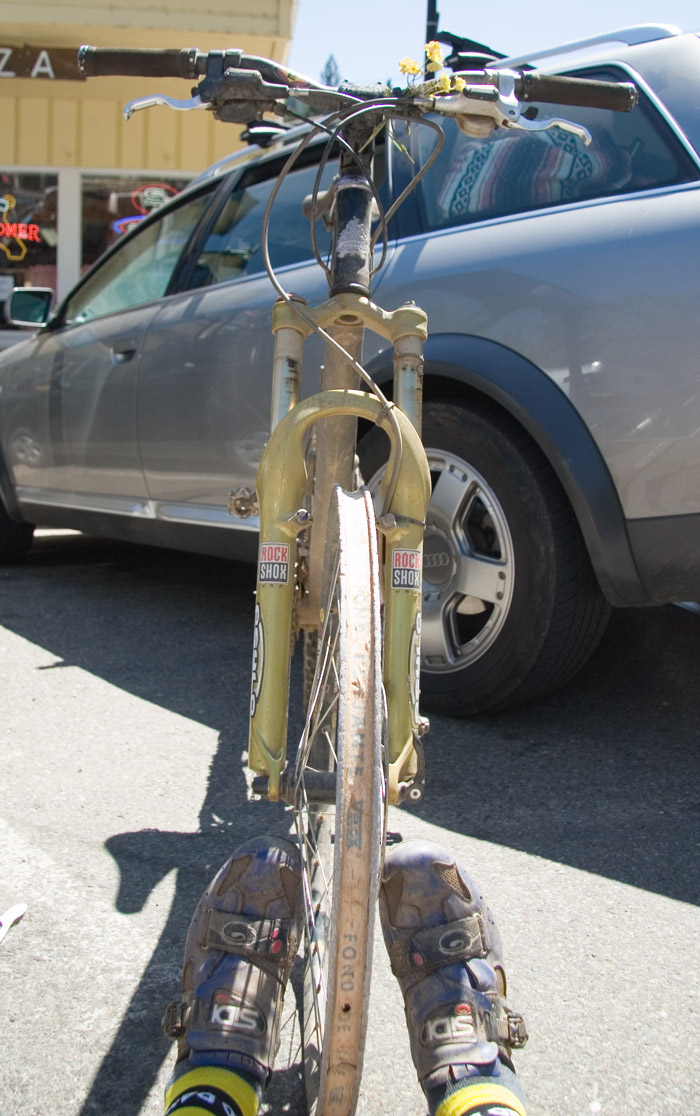 These are two cases that may not be considered when most people talk about the need for threadlocking spokes. Experience means a whole lot when this topic comes up.

One of the best options available for threadlocking spokes is Loctite 242 or it's slightly stronger (especially with brass) relative Loctite 243. Both are commonly refered to as 'Blue Loctite'. I have personally used this for about 10 years. It is great stuff.

Permatex® Medium Strength Threadlocker BLUE is fine to use as well.

If you have concerns about the threadlocking strength of 242 or 243, Loctite 222MS otherwise known as 'Purple Loctite' can be used instead. It is far less powerful but also less comonly available.

If a wheel must be built without 242, 243 or 222MS on hand, Loctite 290 otherwise known as 'Green Loctite' may be used after after assembly is complete (ASAP). This is not prefered, but acceptable in the special cases that real life present.

If you religiously do not believe in threadlocking spokes, then at the very least Anti-Seize should be used. It will not evaporate, wash away, or dry up over time like oil.

Under no circumstances should Loctite 271 or any of the higher strength threadlockers ever be used on spokes. These are commonly refered to as 'Red Loctite'.

Sometimes, you will hear people suggest using boiled linseed oil on spoke threads to keep the nipple in place. It should meet ASTM D260-86(2001) Standard Specification for Boiled Linseed Oil.

Linseed oil is just a tacky oil. It stinks, it's messy, and extremely flamible. I used it once, I will never use it again. In time, linseed oil washes away just like regular oil allowing the nipple to corrode against the spoke. Forget it.

It took less than 1 day for both of the locktites to fully dry. The linseed oil was let to dry for over 8 days. It was still damp in runnoff areas, but the area right around the block appeard to be 'dry'.

A slurry of Anti-Seize and oil in a syringe helps in getting the fluid between the rim and nipple post lacing.