(Note: I am currently in communication with Shimano regarding this issue.)

The new Shadow+ clutch system is an incredible addition to an already incredible 10-speed drivetrain (Dyna-Sys). Originally, the 10-speed offroad shifting was better than any other off road system they’d produced to date. Light, precise shifts with the most rare of foibles, I was instantly spoiled. Then they added a clutch. The clutch keeps the system settled and allows for much better shifting and chain security when mountain biking in very rough conditions especially with rear suspension bikes. I have this system on all my dirt bicycles and it’s been great. Typically, I use SLX mid-cage derailures but some bikes with single rings up front get a ZEE short-cage setup. Of course, my DH bike has a ZEE short-cage, with a DH adapter, for my 38/11-25 drive.

Three problems are plaguing the short cage clutch derailures that I’ve never experienced before, even after running a Saint 810 derailure for over 3 years.

The high limit screw is getting beat to death failing the system, cables are breaking at unusable rates, and b-tension screw is backing out allowing the derailleurs to fold onto themselves.

My Zee derailure has a steel arch that the limit screw contacts. The limit screw is getting hammered to the point of mushrooming over. It also backs out under the impact and is critically out of adjustment within a few runs. Depending on the situation, chains then get jammed between the frame and cog. Bad news. I’ve had to re-adjust my shifting after every run and that’s just to keep ‘fucking lousy’ shifting. 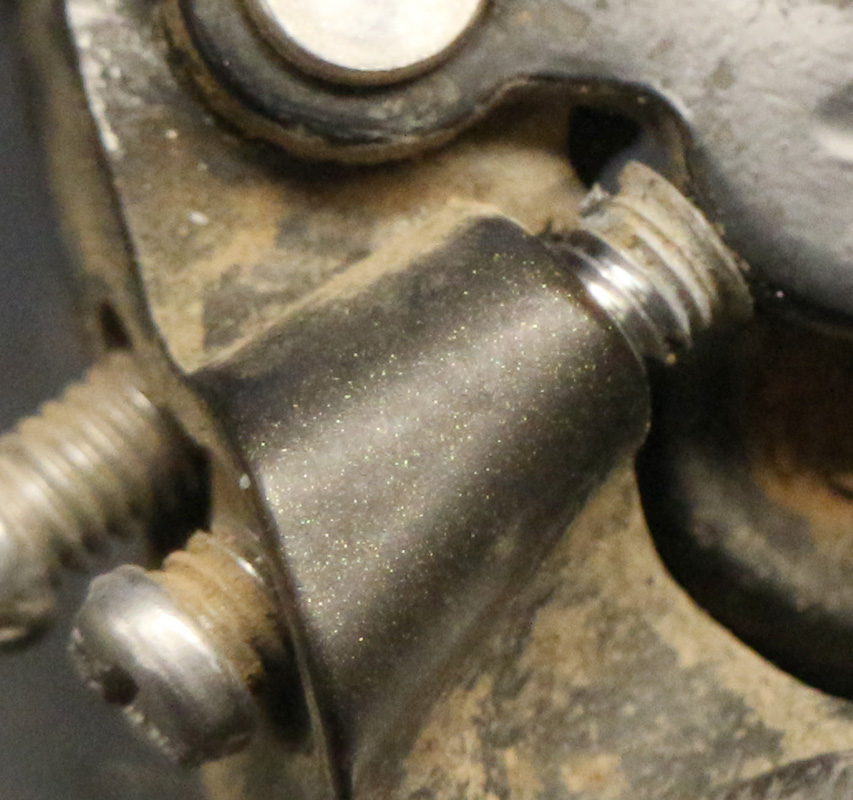 Worse, for folks running Saint M820, the force goes into the aluminum arch, grinding it down and shattering the area. I saw this on my last trip to Northstar and it drove me to finally put this post up. Imagine seeing a brand new $220 derailleur destroying itself in use and being hacked with a file just so a rider can keep riding. It proved to me that mine wasn’t a special case and that others with ‘better’ parts are suffering. I neglected to get a picture of this situation but I did see it.

I’ve shown this problem to several other people I know that have been deeply involved in cycling and working on bikes for 25 years or more. Nobody has ever seen this issue before.

This is what I believe is happening to produce this: With the addition of the Shadow+ clutch to the derailleur, there is a large amount of resistance to the jockeys swinging forward while the bike is experiencing impact. This is what the system was designed to do. Keep the chain tight so that it doesn’t drop or mis-shift. The problem is that this energy has to go somewhere. Since it is easier for the energy to escape via the parallelogram spring instead of the jockey spring, it does. The parallelogram moves up the cassette slightly then returns to the limit screw (or SIS) hard. Given that I’m in 38/11 a lot on my DH bike and on very rough terrain, that return energy goes primarily into the limit screw. It pounds it brutally over and over as this is full on Northstar DH chunder. This may be why this isn’t being seen on XC/TRAIL bikes as much as in DH. It explains the increased cable snaps for everyone and the limit screw / Saint body problem we are seeing at Northstar.

Oddly, when Ryan Condrashoff was showing me the SRAM XX1 system last winter, he was particular in pointing out that the X-Horizon rear derailleur configuration would isolate the movement of the derailleur under impact supposedly to reduce ghost shifting. I don’t think either of us had an inkling as to why this was so important but I do now. With the X-Horizon, vertical forces can only go into the structure and the pulley spring.

It’s completely unacceptable that this is going on and makes me feel that the market is being used for testing purposes wich makes absolutely no sence, especially for such a good company.

In six trips to Northstar on my DH bike with the ZEE derailure, I’ve broken 3 shifter cables in exactly the same way. Sheered clean right at the clamp plate. I’ve seen others with the same issue and heard of many more. After inspection, the problem becomes obvious. The geometry of the cable line puts all the tension force onto the clamp plate in every gear but the lowest where the alignment finally becomes resolved. The clamp plate has a very sharp edge where this force in focused. In use, the cable is sheered clean and all the breaks look identical. It seems like this is sudden sheer of all strands, but that may just be that once one goes the rest go in rapid succession with very little time to observe the problem mid way. 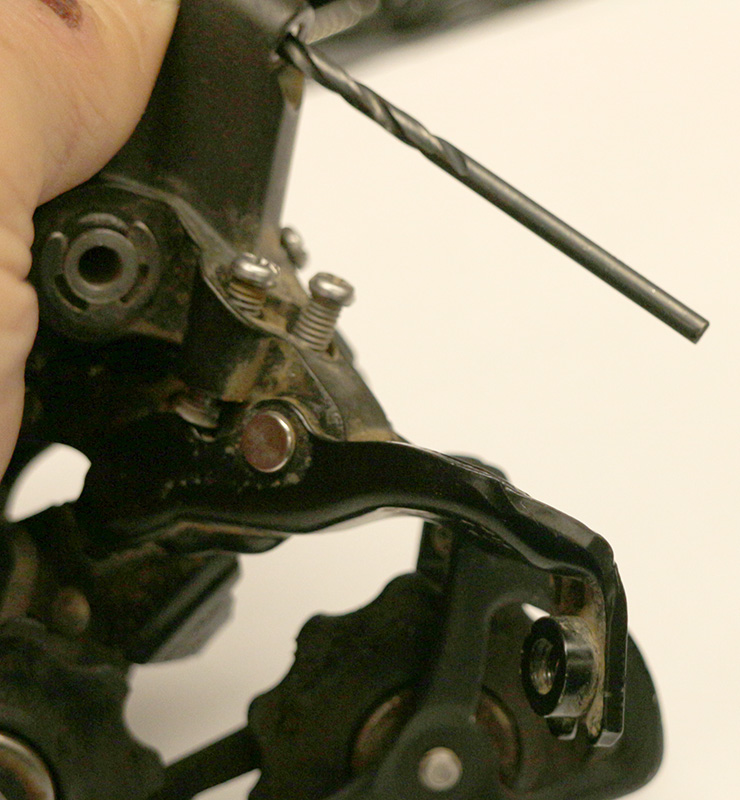 To fix this issue, I added a radius to the plate where the cable enters. This should reduce the effects of the sharp edge. In two days riding since I started doing this I haven’t broken a cable, but that doesn’t mean that I’ve fixed it exactly. A few more days will be required to see if it really has worked. Regardless, I am going to do this to all my derailures on every bike I have.

The picture below shows what I’m talking about. Stock sharp edge on the left and filed radius on the right. 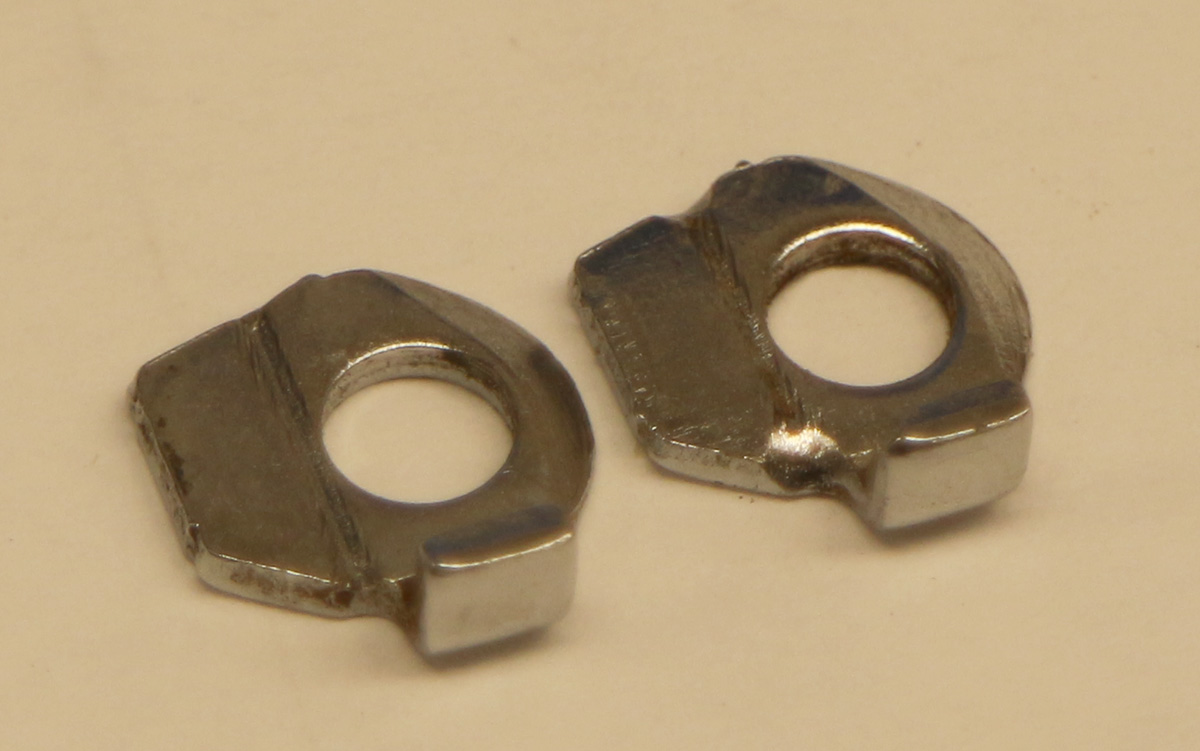 I will be inspecting my other mid-cage deralures for similar geometry strains for my own knowlage. I will also add a picture of a sheered cable the next time I see one of have one. They all break the same way so you’ll know if it’s the plate issue or just normal cable strain immediately.

Shimano knows that this issue is happening and is looking into it.

The B-tension screw is backing out. I tried Loctite to fix this and it didn’t work. As a result, the derailleur is able to fold over so much that it grinds against itself. This pissed me off. 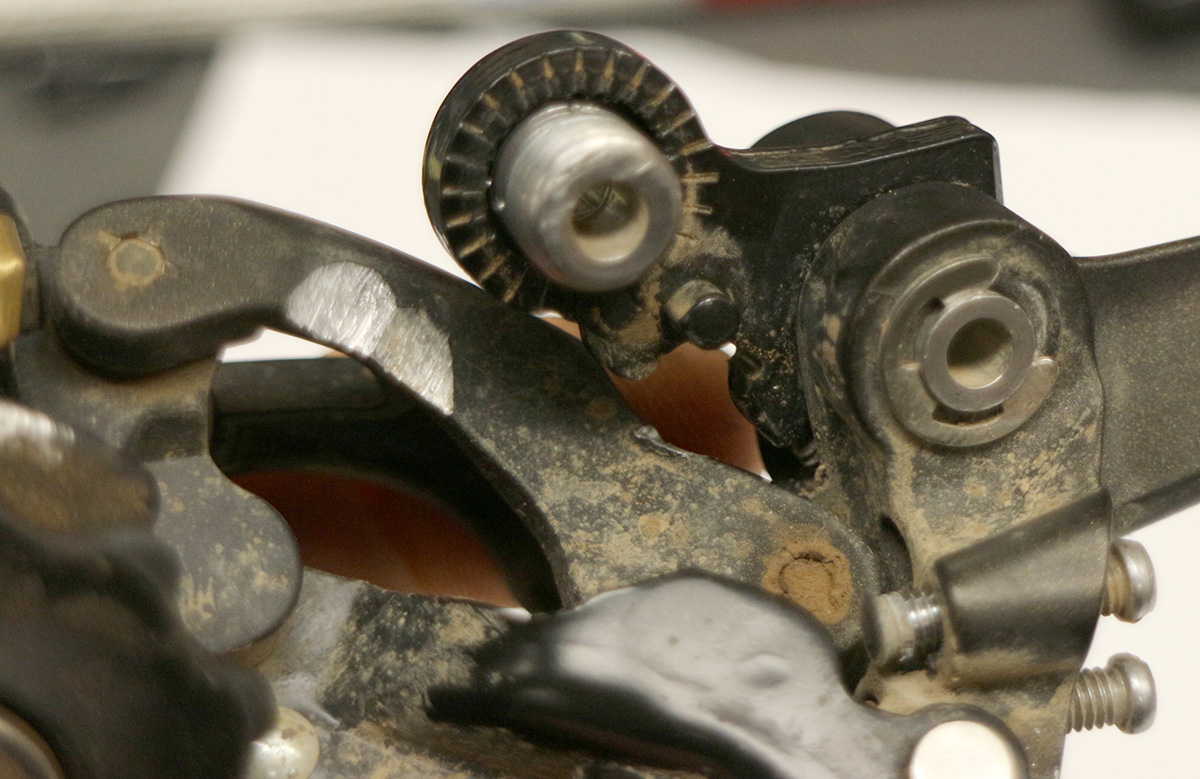 It seems like the derailleur is cocking or getting bent internally. The outer link of the parallelogram is getting bent during use. They tried to save too much weight and it shows. They need to strengthen this part NOW. I’ve had to bend the ‘axle unit bracket’ considerably to keep the pulleys in line with the cassette. My Saint 810 never had an issue like this.

All of the pictures here are from a derailleur used for just 6 days at Northstar. I replaced the derailleur thinking that there must be something faulty with that particular unit. The issue appeared again immediately. The high limit screw even bent on the first of day of my last two day trip.