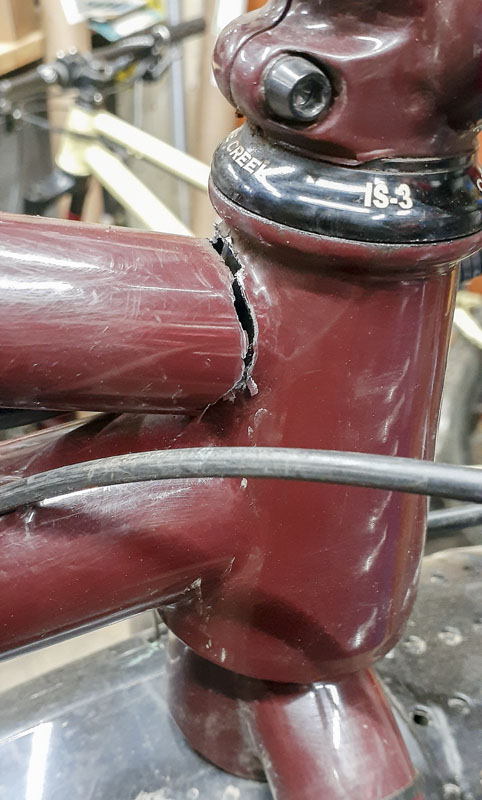 Klunkers. Dayum. These things keep teaching me some big lessons in bike design and engineering. I have been forced to look at details in entirely new and unexpected ways to solve this riddle and that learning carries to all facets of bike design.

In addition to design challenges and growth in tooling and CAD, there are the failures that surround these experiments. The PVD SuperMarine Spifire had an especially tough start. A failure in the first few rides (whether the cause or a result of crashing) of the handlebars led to a complete review of my use of carbon fiber and my fabricated handlebar/stem assemblies. While this was a defeat and painful in the short run, good improvements happened and now the bikes are better.

The Spitfire has, again, pointed to an engineering problem in my design that hadn’t previously been an issue. Riding the full rigid, short head tube, high bar bike as much as an enduro bike as I can created a failure mode that other bikes hadn’t yet. A complete failure of the top tube at the connection to the top tube.

I tend to use 25.4mm and 28.6mm top tubes on my road, gravel, and mountain bike frames. I’m looking to introduce flex into this component of the system. This makes for excellent tracking at speed on narrow single track and otherwise a more comfortable to ride frame. Other’s choose to use (in steel) 31.8mm top tubes thinking that they will make a stronger frame (which is true) but this is at the expense of ride quality. Until now, I’ve been using the smaller diameter 0.9/0.6/0.9 butted tubes without incident.

What was different here? Why did this frame fail? Why this bike, the first failure like this in all my bikes?

During the initial construction of the Spitfire, there were several hurdles that needed to be overcome, one of which was the lack of usable top tubes available from normal distribution streams. A 661mm long 28.6mm tube is not something that people building old fashioned road bikes are looking for. The tubes just don’t exist. So a 4130 0.9mm straight gauge tube was used. Not light, not perfect, but it worked. The bike was fine…for a while.

A few weeks ago the incident happened, I was doing a short workout lap around Camp Tamarancho here in Fairfax. It was just something to keep active and I was stopping to do minor trail work and block cuts. I was dropping the rock on Serpentine trail. I heard a ping. It sounded odd, like a rock hitting the downtube but different. I stopped to look at the carbon in the bars and fork as that has been a concern. No issue found. It must have been a rock. I pedaled on. Going through the rock garden on Wagonwheel trail and down one of the larger rocks, I heard the noise again. I wanted to be safe, so I stopped right away again. I looked at the carbon again. It looked fine. I was sure there was a problem….then it caught my eye. Oh shit. The top tube had completely broken free of the head tube! It must have broken one side on the drop and then the other side slamming rock. That explained the sound that I heard.

I walked the bike home to minimize any further damage to the bike in it’s now broken state. This, the walk of shame for a framebuilder. This hurt. Nobody wants this to happen. BUT THIS WAS A GOOD THING.

HUH?! How is this a good thing? This was a failure. This was bad.

Sure, nobody wants to have one of their designs fail but if it happens, and nobody gets hurt, and you learn something very important, then it’s a good thing. Just like my handlebar failure, my bars are now better because of it.

This bike was intended to be as capable and as fast as my PVD Warbird but without a suspension fork and with flat pedals. I’ve been riding this bike as hard and as fast as I possibly can at my age. It’s capable of very high speeds considering it’s limitations and a whole different kind of ride than almost anybody has ever had. Keeping the top tube low with the tiny 85mm head tube, short 440mm rigid fork, a hand grip about 190mm over the head tube, and of course the 28.6mm x 0.9mm top tube puts a huge amount of instantaneous force onto the top tube right where it connects to the head tube. A ton more than on other bikes. Certainly, far more than my Warbird even with it’s 180mm travel suspension fork.

The small diameter and relatively thin top tube was experiencing extremely high instantaneous loads every time the bike was ridden. Forces found weakness in the tube right at the head tube. Eventually, it broke and quickly, but not through the weld. Just behind it. This was the engineering failure, increasing the forces acting on the tube dramatically without giving the tube more to handle it. This tube can’t handle that.

So, how do we solve this?

We have three routes we can take for solving this, increase the diameter of the tube, increase it’s wall thickness, or some of both. I don’t want to increase the diameter of the tube as this will make my frame too stiff. I can’t just use the next thicker 4130 tube as it’s 1.3mm and would be very heavy. Since this is real engineering and not classroom work, we can’t just order tubes custom made and have them show up in the morning at little cost. I don’t want to make my bike a shitpile as that isn’t why we do this….we get creative.

I used a great solution for figuring this out. Starting with a few ideas, I shared them on Facebook with some folks tagged that I knew would have some good ideas also. Some discussions, some more ideas, some more drawing.. Debating a design with formidable adversaries is one quick way to figure out a direction to go.

Here’s what was arrived at: 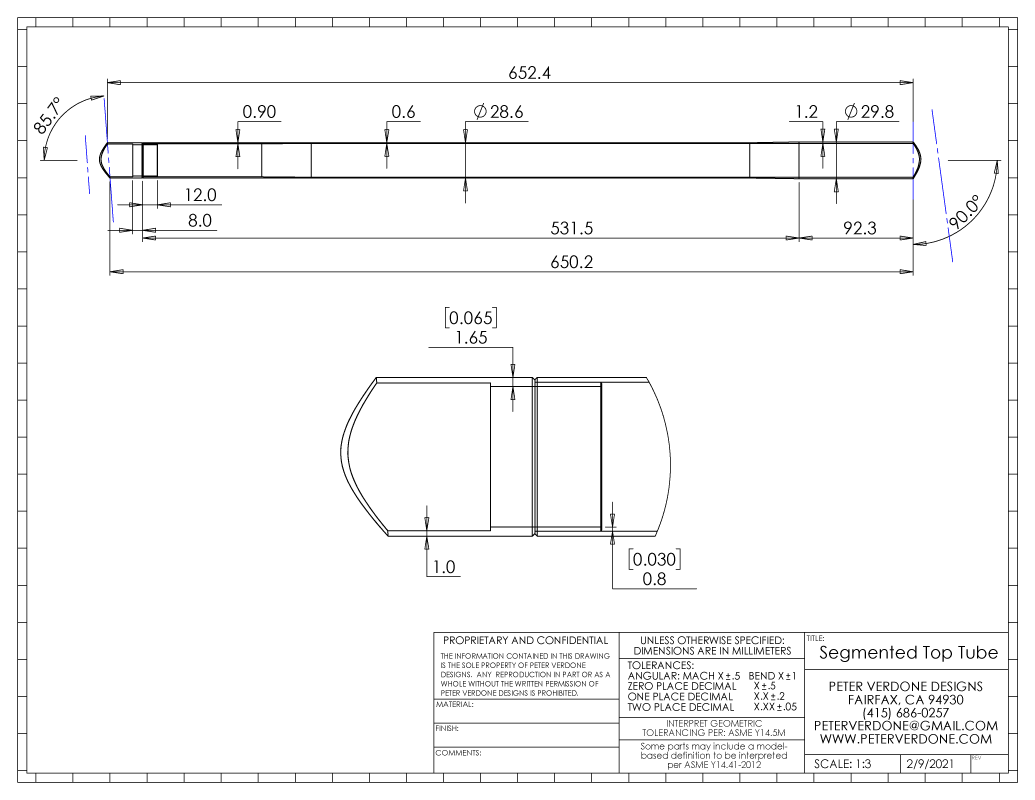 A Nova 201907-4110, 28.6 EXTERNAL BUTT SEAT TUBE 1.2×0.6×0.9 x 635, with an extension welded to it on the seat tube side where forces are lowest. This isn’t optimal but I could implement it now. It increased the wall to 1.2mm at the head tube where it’s needed, it’s also a little larger in diameter, but only where it’s needed. The tube should flex almost as much as before but take a much more abuse at the head. 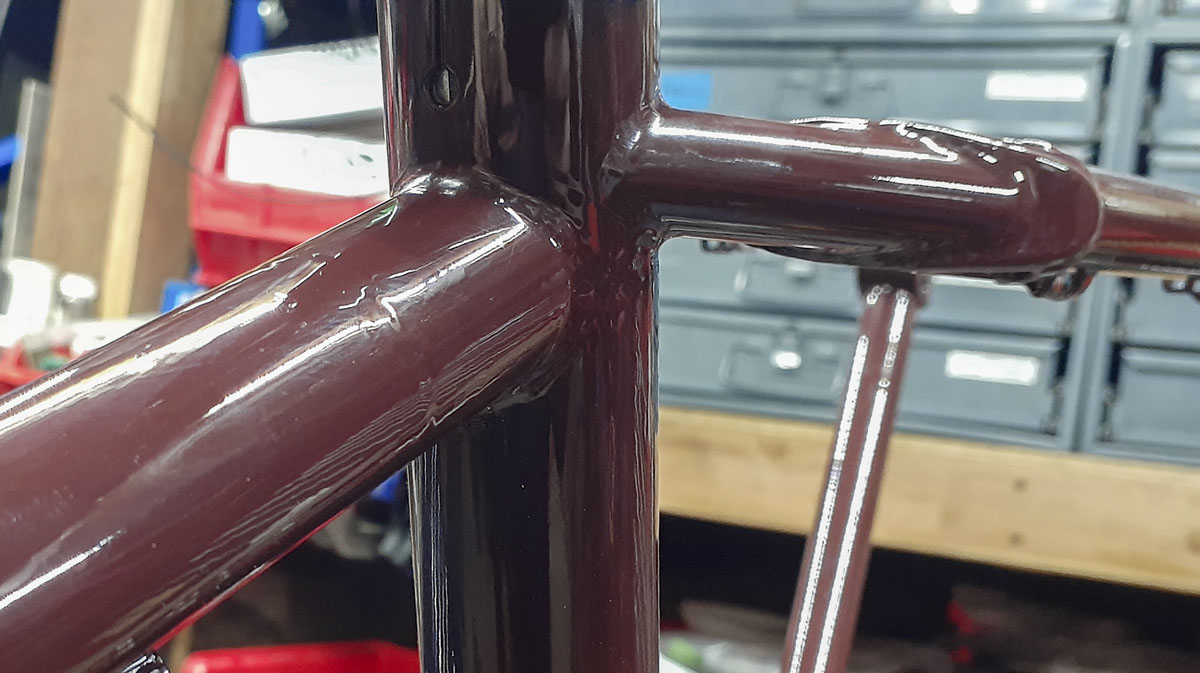 We had a lot of discussion on gussets. I designed a gusset that I really liked from a design perspective, but I don’t like gussets from an engineering perspective. I think they aren’t a wise choice if they can be avoided. I decided not to go this route just yet. Maybe I will if the tube fails again I’ll go all in with this. There are a several schools of thought on gussets. If you want to make a group of framebuilders turn into a pack of raving lunatics, start talking gussets. 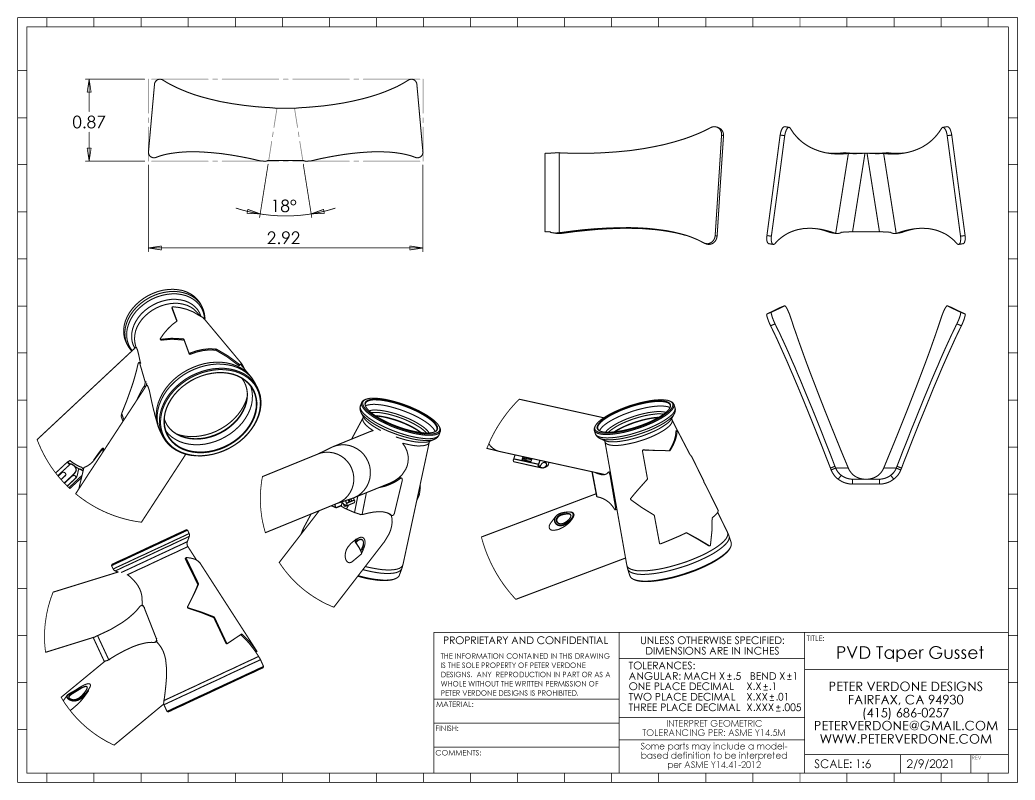 Through this, I did get some tubes ordered on the back of another company’s tube order from Taiwan that are 730mm long and has the thick end I need. Those are 4 months out before I’ll see them. Hopefully, I can have these in hand for the next few builds.

When going through this, a few people said, “just use a 31.8mm tube, it’s stronger”. It is. But I don’t need strength here. I need toughness. Strength ≠ toughness. A good bike frame is not a girder. It needs to move. It holds the road when it flexes just right. Without any movement, it skips off. It’s slow. I need the frame to hold together, to last, to not fail. That’s toughness. I don’t need more stiffness (for where I’m designing). I found a solution that keeps that in mind. That’s the win.

What happened here? One strange bike design exposed a weakness in it’s particular design. The solution (I hope) doesn’t add much weight to the frame but is great insurance on any of my other bikes. I’m going to implement the change on all of them and they are going to get better as a result of this. This is what any development program is looking for. 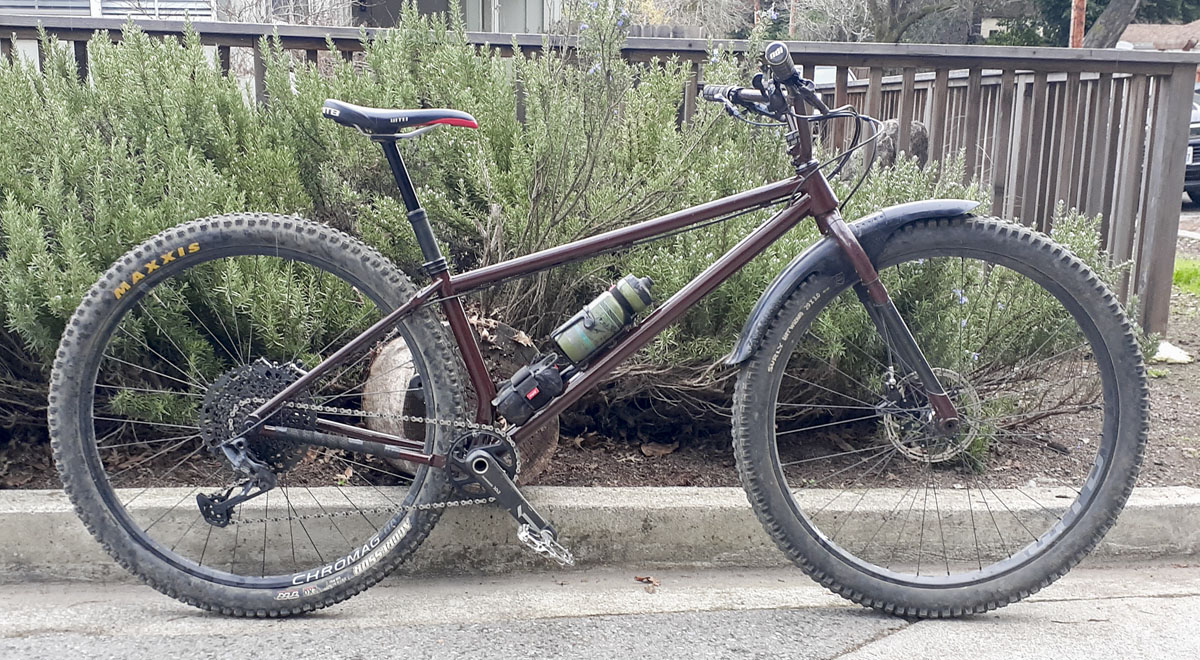