Urban bikes are odd things. They have to do very particular things for each particular user. Grocery getters to cross town commuters. Fashion victims to bomb squads. They take on rolls like we all to, generally categorizable but highly individual.

I ride all over the bay area while commuting but mainly through San Francisco. I like to keep it fun. San Francisco is  one of the best cities in the country other than New York City in terms of aggressive riding. New York has tons of features but San Francisco has massive hills with features…and dirt. It kinda kills me how many people ride in SF but don’t really dig deep into how awesome it is. To get to that, you climb. You climb a lot. Just like on a mountain bike. Avoiding the hills relegates you to the kiddie pool. This was the core of my disdain for the fixxie trend here over the past few years, they avoid every hill but when they do go down on it’s completely lame. It’s not much better with the new upright bikes. There’s just so much to this place that is missed.

My inter-modal commute from Fairfax in Marin to SFSU, at the edge of southern SF and almost into Daly City, is probably the toughest test of an urban rig. The route takes me a few miles into San Rafael where I board a bus to take me down the highway south. I get off at the Golden Gate Bridge toll plaza and then pedal across town. I go up and over Twin Peaks almost every time with varying routes depending on the day. I ride very aggressively. I ride on the wrong side of the road. I run red lights and stop signs. I pass stopped traffic jumping curbs and rallying the sidewalk. I might ride some singletrack or boulevard race with other nuts on Market Street. Flat out hooligan. That’s my commute.

I’ve been playing with a bike I built a while ago to fit my needs better and it’s allowed me to change my riding which then changes the bike. Parts have been getting swapped. I’m about to the point of needing a new frame. This one is a little short in the front center by about 25-40mm (690?) & could have a steeper seat tube. The chainstays could be 15mm shorter. The head tube should be shorter for more clearance. The current bike needs it’s cable guides relocated and added for the dropper line. It also needs a better fork as the current one is far too stiff. With a repaint, it will look new. A new frame will use Boost 148 spacing. 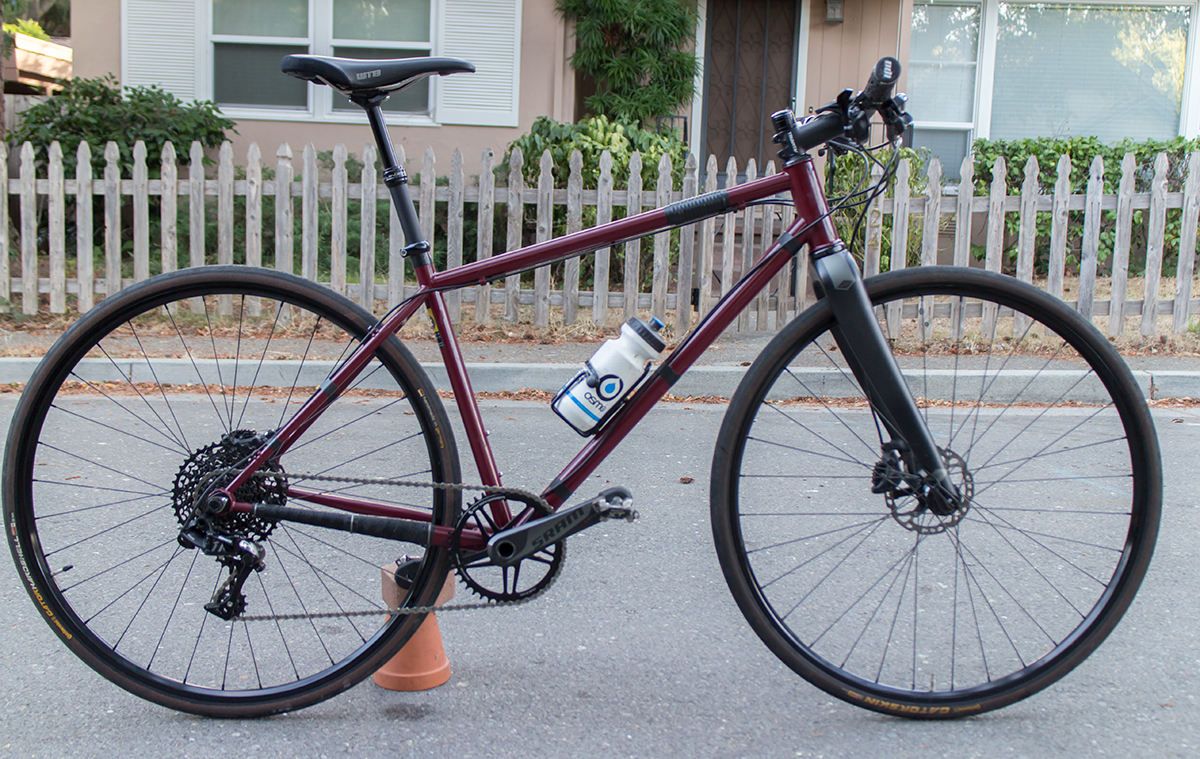 The addition of the dropper post was a paradigm shift. Just like with mountain biking, the dropper opens everything up. I was prompted to go this route as I kept feeling like the saddle (when high posted) was cramping me when I was pushing the bike hard. Jumping a road median or truly aggressive descending on San Francisco hills left something to be desired and felt really sketchy before the dropper. With it, I try something new on each ride. The dropper comes in handy in so many ways. Stopping at lights, Loading on the bus, trolling with a coffee or groceries in hand. It makes things very nice.

100mm is the maximum available for this size tube (27.2mm). I would prefer at least 125mm or maybe the 150mm I’m used to offroad. The KS Southpaw lever is an absolute requirement for KS seatposts. A very classy part to replace a miserable one. 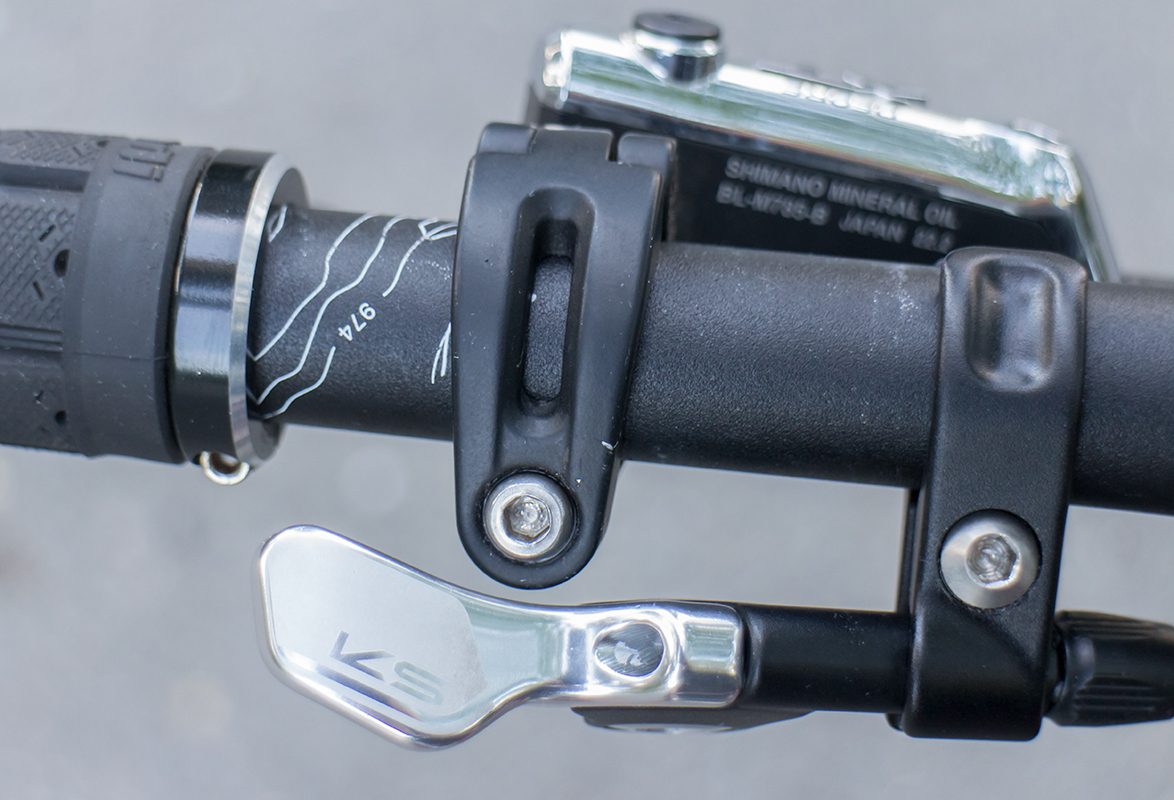 The drivetrain had been 42/32 & 11-32. SLX/Deore parts and a clutch derailleur. It was solid. It worked well. I had the range I needed but I spun out a little on descents. I could have moved to a 44t ring to get what I needed but in doing some math, I found that a SRAM GX 10-42 (XG-1150) cassette and a Wolf Tooth 42t w/n Drop Stop chainring would give me the better range and allow me to play with the 1×11 drive train like I haven’t been able to on my mountain bikes (not enough range). Set up, it looks crazy but clean. The bike is a little rear heavy now, something that I have to get use to. It’s really kinda fun and provides just about the perfect amount of gearing and range needed for riding San Francisco properly. At times, the large jumps between gears is noticeable but that sense may go away in time as I get used to ‘pushing up’ the gear. It’ll probably result in faster riding. 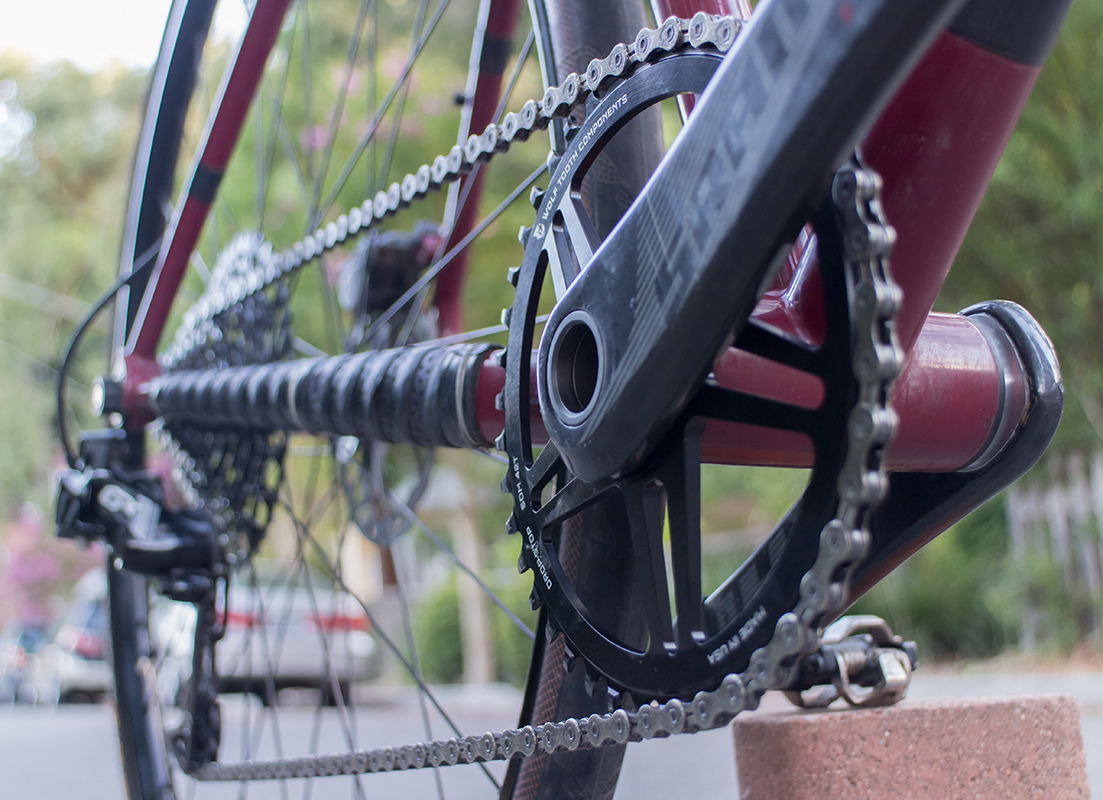 The SRAM 1×11 X-Horizon rear derailleurs are really very wonderful designs. Shimano rules the multi world but SRAM is killing it for singles. 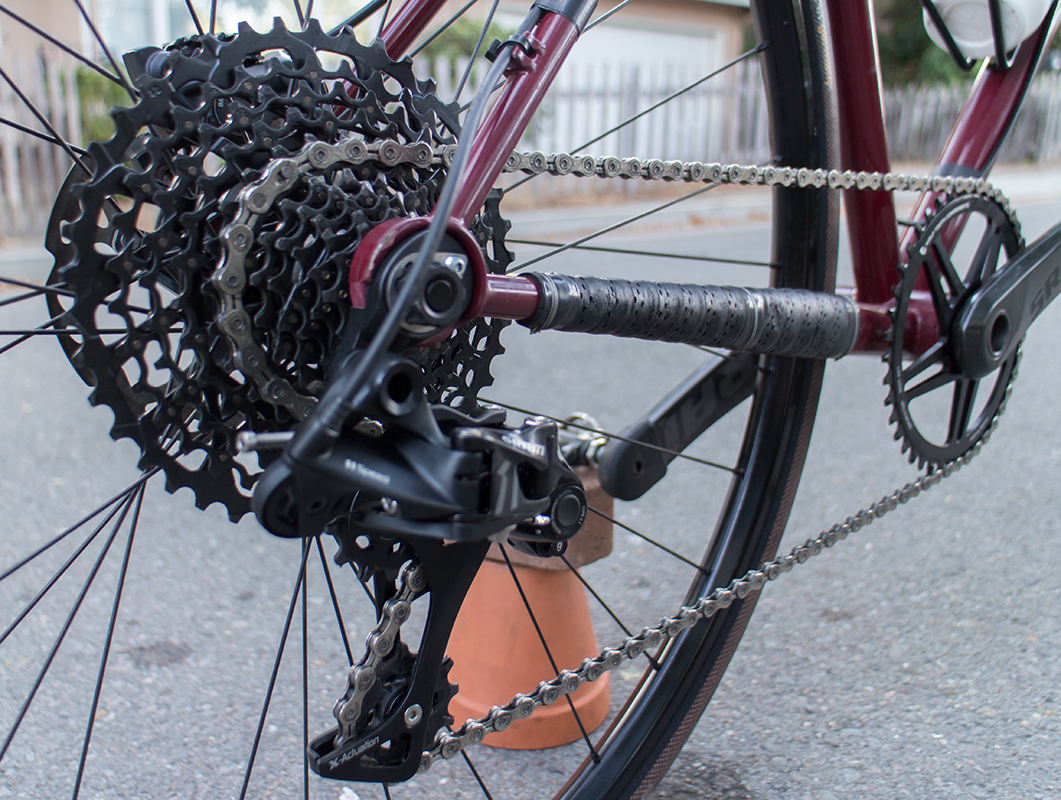 The drivetrain as I have it is comparable to 50/34 & 11-34 or 46/36 & 11-36. A setup that might be found on some Old Caz Hopper bikes. Still, maybe lower than you’d see there. I want gearing low enough to get me up Twin Peaks even when I don’t want to go over Twin Peaks. I don’t want to build in excuses. I would like to try a 44t ring if Wolf Tooth decides to make one. Preferably in an oval and round configuration to compare. 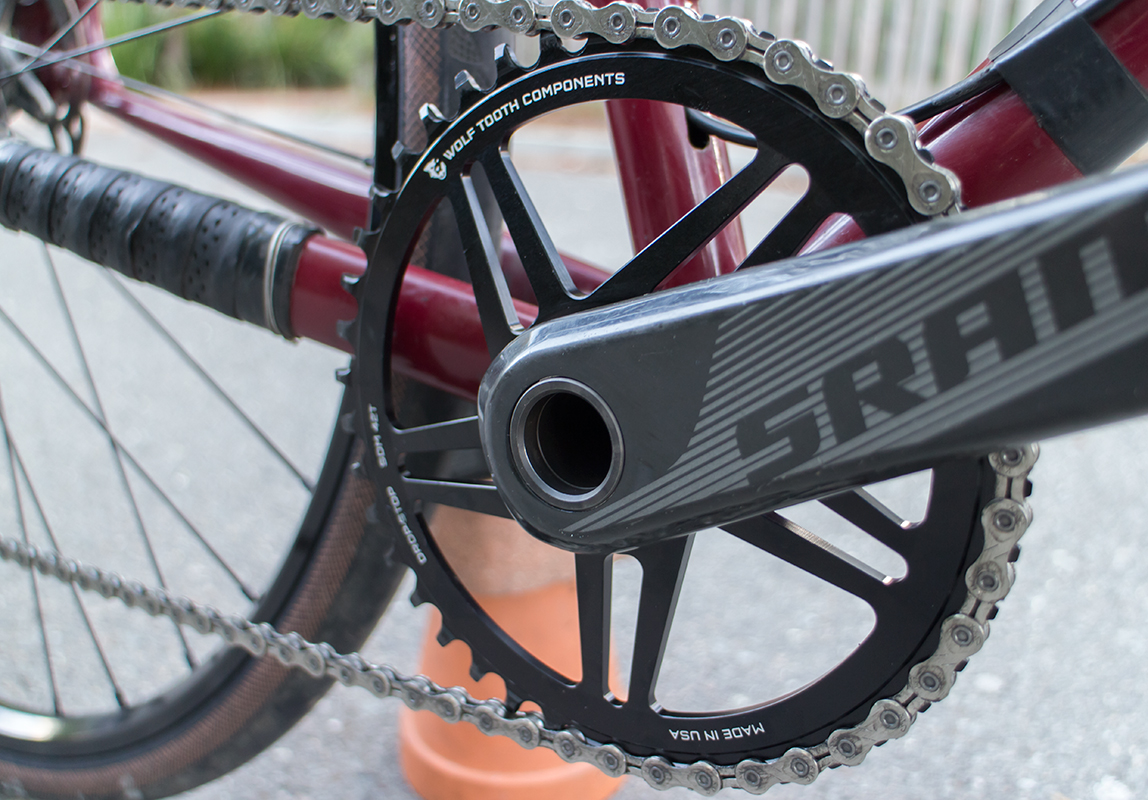 Probably the absolute worst part about the GX system (or any SRAM flat bar system) is the shifter. Undeniably the worst piece of trash available for flat bar shifting. As a Shimano fanboy, or rational human, knowing how good the Shimano shifters are in comparison makes this system a bear to deal with. Worse, the GX doesn’t have lever position adjustments, making it even worse. We will see how long I can handle it. 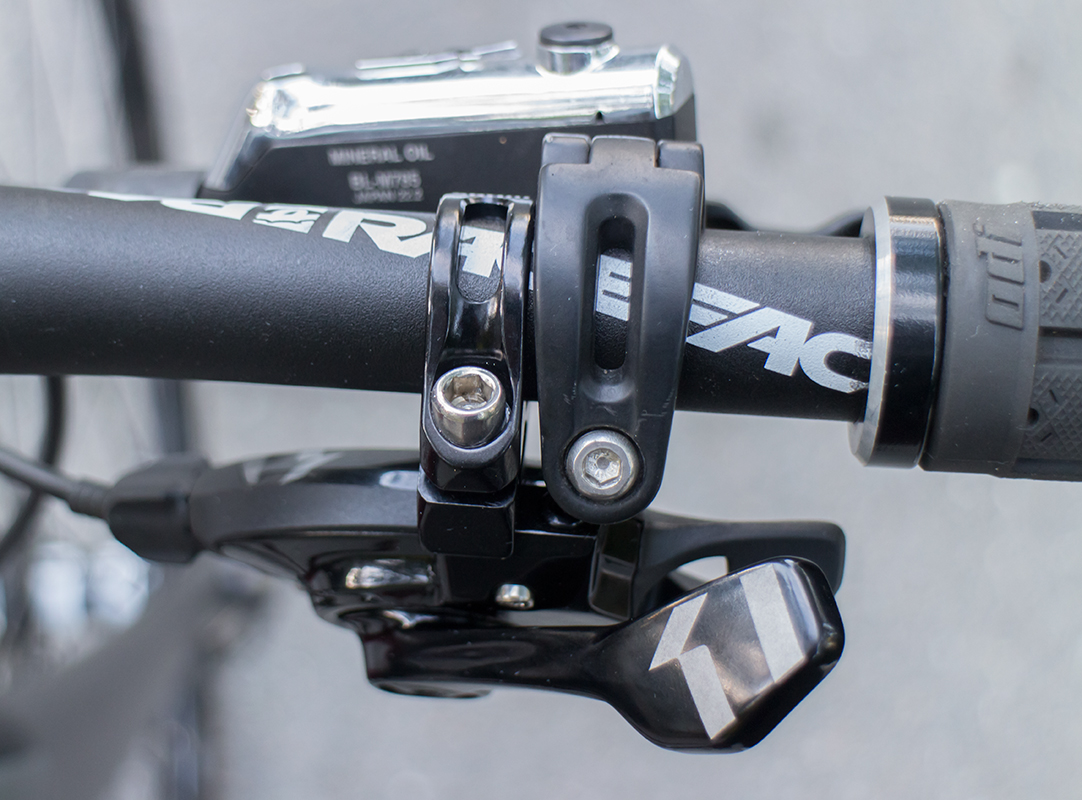 The wheels on the bike are rugged. Built to go through hell…fast. Stan’s Arch EX (R)/Crest (F) rims with Continental Gatorskin Hardshell 700x28c tires. Because of the 21mm internal width of the rims, the tires grow in width to 31.5mm. A bit big for real road biking but in this application, perfect. The solid feel of these tires and the large contact patch makes me feel completely planted. The snug fit of the bead in the rim is reassuring when cornering hard coming down these crazy hills.

I had tried running 700x32c tires on this bike. GatorHardshells as well. The bike felt so sluggish and lame on road that I needed to back down to 28c for some ridability. Anything larger than the 28c tires would have to be reserved for full on dirt days.

The Whisky #9 fork is horrible. The real weak link of the bike. It’s far too stiff for comfort in any way. It’s even too stiff for what I’m doing when I’m pushing it. It just doesn’t seem to move. I’m hoping to build around the new Enve Cross Disc fork on the next frame design. 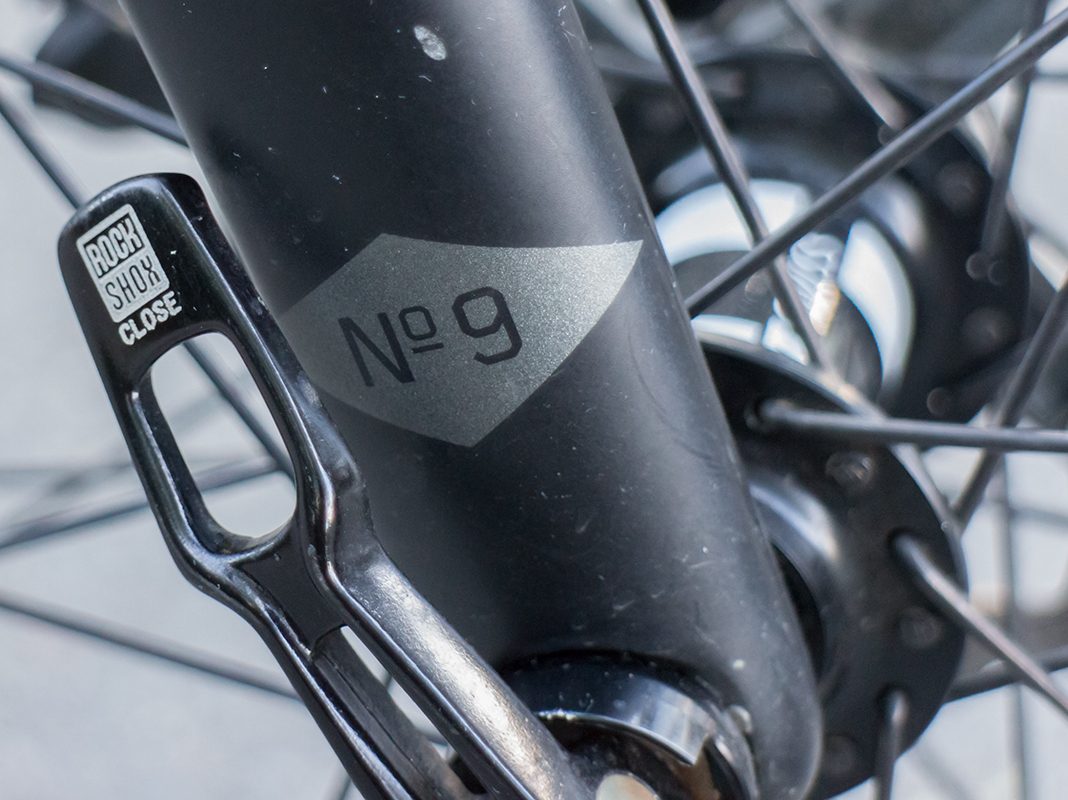 Given that this bike works so well in San Francisco, a bike similarly set up but with a more narrow gearing would work well in other cities where riding aggressively is as important as getting there. Boston, New York, Philadelphia. It’s really something to think about on your next ride….should I hit that?

Of course, your thinking now of the new Cannondale Slate. Sorry, this tragic exersize has been getting a lot of press recently. It’s really not the bike it’s thought to be. 650b wheels instead of 700c to squeeze in a fork without making an effort. A fork giving just 30mm of travel rather than something bordering on useful at 80mm. It doesn’t come with a dropper post. It’s gearing is too tall for where I live or real dirt. It’s really a tragedy and I would not recommend it. For a bike in such a compromised state, not providing flat bars is just weird. It’s a bike that got started as an interesting idea but then everybody played it safe. My take is that they didn’t want to redesign the lefty to work with a short head tube that would have provided proper hand position with usable suspension and a 700c wheel and that is where everything went wrong. Then they’d also need a whole raft of special stems. It’s clearly a problem the more I look at the bike. Maybe they will fix it on the next draft.