This past Sunday was the Stafford Lake Wildcat CX race just outside of Novato in Marin County, California. The weather was simply amazing. Just slightly cool in the morning to almost warm in the afternoon. The skies were completely clear and rain from a few days before had left just the right amount of moisture in the soil. It would be impossible to produce a better day. I love where I live!!! 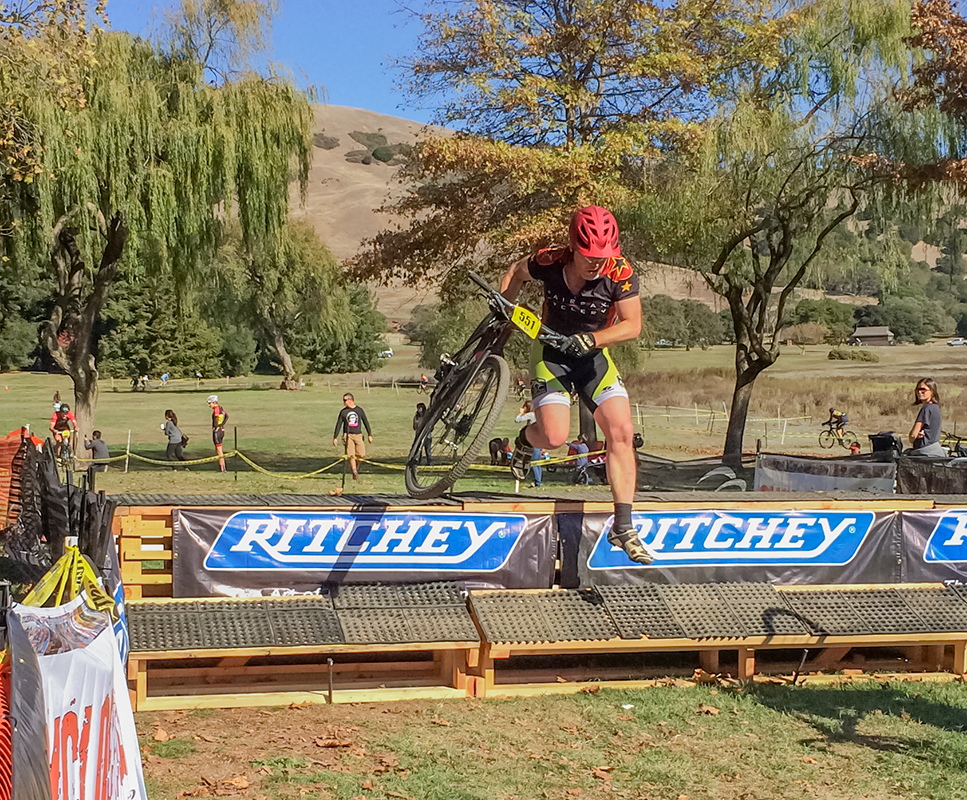 I’ve had a hard time with all of my racing this season. I’ve only done a half a dozen or so races this year. A couple of races have gone really well. Not with regard with my showing but in that I gave my all and nothing really went wrong. My issue is that I’m not really super into it. Still, they have been all kinds of races from Grasshopper Old Caz Adventures to Boondocks Downhill at Northstar. While I did get a good start to the season in terms of motivation for riding and training, that has slowed quite a bit and I’m just not getting enough time in on the bike. I’m simply not in shape.

I don’t like cross. It’s not fun. It hurts. It plays to none of my strengths, often caging them. I’m an aggressive technical mountain biker. I can ride down almost anything and quickly. In a cross race there is nothing approaching a technical challenge on course. Also, I am forced to park behind much less skilled riders in any area where bike handling could possibly be needed. My weaknesses are magnified. In any climb or flat area, roadies crush me. It’s just not funny how they leave me behind. It’s really all that I can do to hold a wheel sometimes. It’s hard to face all this.

What is cross good for? Simple:

* It’s convenient. You can get to a race, race, and be home before half a day is over.
* It teaches you to suffer and not quit. This shit just hurts. It does. Ugh. More BPM than any rave you’ve been to.
* It’s easy to spectate. Lot’s of laps in a small area keep you in the public eye.
* It’s safe and without any real risk. Anybody can do it. No technical challenge means that even roadies and girls will show up.
* Beer?!
* Girls in onesies!

Of all the CX races in my area, I like Stafford the best. If there is one that I will race, it’s this one. The venue is just fantastic. It’s gorgeous. The amazing hills of Marin set the stage for the battle. The course is unlike any other CX course I’ve done (not that I’ve done a lot). It feels like mountain biking for part of the course and that’s a nice thing. Murphy Mack and his crew are very organized and really know how to host an event. Things go so smoothly. This is the race to do if you are around for it.

I did little to get ready for this race. I rode my bike on Saturday to get used to it. A little spin in the hills and a cut through Camp Tamarancho. I caught Davey Simon and his crew just finishing a work day on the Endor Flow trail. We talked and laughed at me and my cute outfit and skinny tires. I then did a couple of runs down the flow trail on the cross bike with my seat mast fully extended. It was the first time that I had done something so pathetic and stupid. It was horrible. It was a total joke. And it was very dangerous. Don’t do this.

I got a pre-ride loop in on the course early Sunday morning. Things were basically the same from years before other than a small bypass due to construction. Construction for what? Marin’s first Bike Park. The Stafford Lake Bike Park. This should be a very nice thing and the upper slopestyle area has taken shape and looks legitimate. Next years race will take place with the park open and should make for an incredible event.

We start staging for my 10am start for Masters Men B 35+. With the 45+ group starting just behind there were a lot of riders about to be on course. Fourty or so riders in each group. Dam. Everything is going fine. Sasha McGee is our MC and start marshal. He counts us down. At the gun, one crazy guy comes running from the back of the group around the side in the grass hoping to jump ahead of the ‘call up’ riders. He trips with his bike held in front of him and falls face first into the ground and his bike. All this just as the peloton gets rolling. Bad bet.

To add insult to injury, at 44, I’m of the oldest riders in my class. Many of the riders in my group are 5-9 years younger than me and at this age, that’s huge. Next year….next year it’s my turn!

I ended up with a decent start which is important in this race. Things cluster into a bridge and then the big climb so getting a good start keeps you safe and out of trouble. I was glad for that. I was in the first third of the group here. I need this as I will start getting passed soon enough.

My first lap was hard. I really wanted to quit after the first climb. I was not stoked at all and in a lot of pain. I was also forced to ride very slow on the trail part of the course, stuck behind roadies that don’t know how to ride in dirt. It made it hard. In the back stretch, I even made a mistake remounting my bike getting over the first barrier when my foot slipped from my pedal. I was completely embarrassed when my knee contacted the ground. This is not the way I lose time in a cross race. Thankfully, that was my only mistake on course.

What was the course like? Rough. Actually, only in a couple of places but it was so punishing and brutal in those places that it was hard to keep moving forward. On the fourth lap and after, the effort was pulverizing. It took so much effort to keep speed. It was hard. The saving grace was that we all had to go through it.

The Belgian Wall has been greatly improved. The slanted steps and all wood construction allow for much faster vaulting. I was enjoying that although I could have done it better if I weren’t so exhausted.

Lap two was probably worse than lap one. I really wanted to quit. I was really hurting. Still stuck behind roadies that couldn’t ride that would then dust me on the flats. Life was hell.

Lap three was pain. All pain.

The only saving grace on lap four is that I was finally able to get a clear shot at the trail section without traffic. Now, though, too tired to make much use of it.

The insult and the injury. Finishing the fifth lap and crossing the timekeepers I hear the call, “three laps to go”. OMFG! No. I can’t do it. This is a fucking nightmare. Holy fuck.

As I cross the line to start lap seven, they announce that it’s the bell lap. THANK THE MOTHER OF GOD!!!

I know I can do this. I really do my best to go as hard as I can. I don’t quit. It hurts so much. As I re-mount after vaulting the Belgian Wall for the last time, I give it everything I have to the line. Done. Make the pain stop.

An average of 164 bpm and a maximum of 175 meant that I kept my heart rate perfectly under control. It would have been better if I had an average of 168-170 but that may have not paid off too well for this distance. It’s an honest output. I can definitely say I wasn’t slacking. My heart rate did dip under 160 bpm very quickly three times in the race which shouldn’t have happened. That wasn’t good.

My bike was setup nearly perfect for this course. The only glaring issue was cassette spacing. I was using a 42/32-11/32 gear range. While this was very close to the right focus for gearing, I had some issue with the cassette spacing being to wide between gears. I could have run a 12-30 cassette and had an easier time finding the right gear quicker.

Dealing with the bumps and chop on course is tough to call. I had a 700×1.8″ front and a 700x35c rear mounted on wide rims. The long flat sections make me question anything larger. I’m going to stick with my choices. 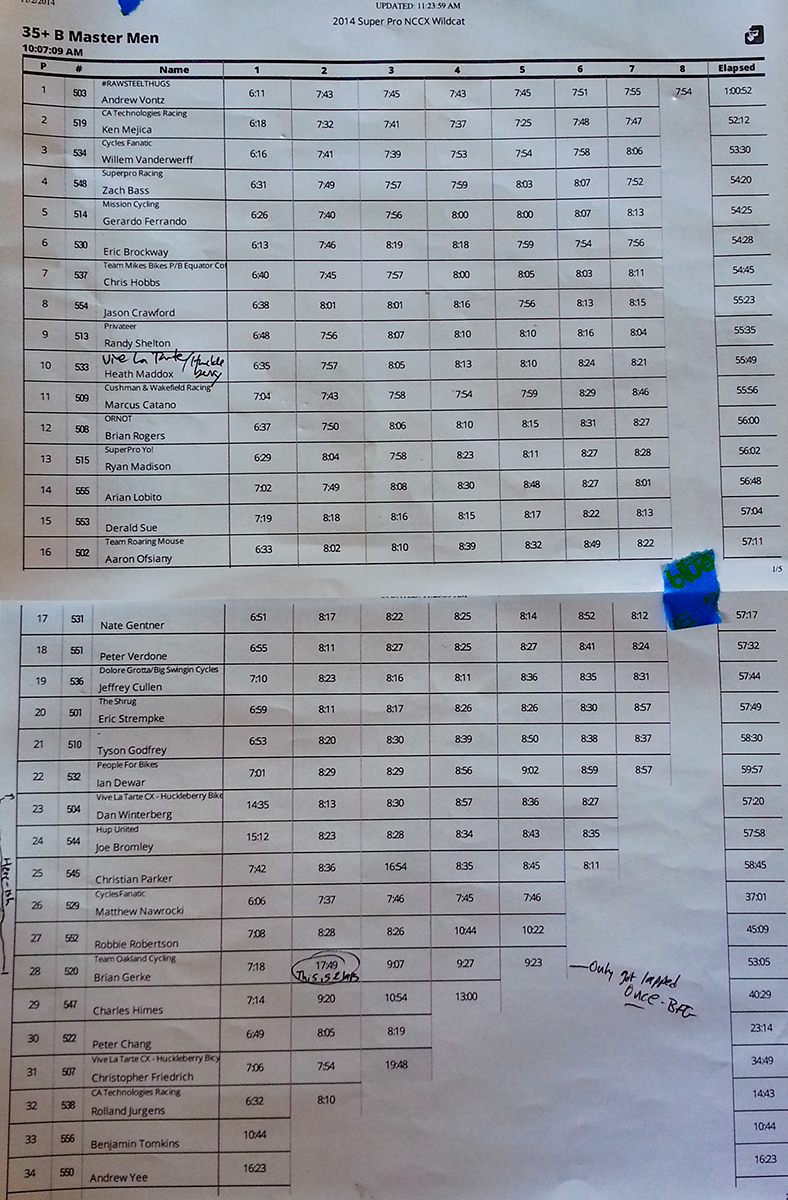