I’m a pretty dumb guy. Really. I learn new things every day that make me step back and say, “Dam Pete! You’re a dumb mutherfucker! You should have seen that long ago. It’s obvious.” I get kinda down sometimes. I feel like I’ll never catch up to what’s going on. I have to try and think about unicorns just so I can remember how to smile.

….then I read or listen to what others say….

You want to know how to spot a moron in the bicycle industry? It’s really, really easy. They use two groups of words often: “stem length” and “top tube length”. If you hear these two sets of words together coming from someone, you don’t have to listen to anything more that they are saying. They simply don’t know what they are talking about.

There are several good reasons for choosing one particular stem over another. They vary in vertical and horizontal offset (relative to itself). I change stems all the time. I’d say that any one of my bikes will see between 3 or 4 different stems on it over the course of a year. More if I’m racing a lot or my fitness is changing a lot. That’s not the point of this post.

I’ve been made a laughing stock over the past few years for choosing stems that were longer than 50mm. Most of this from mouth breathing clowns on the internet but at times from other riders who never learned how to setup a bike or make decisions without reading about it in Pinkbike or Decline. My reasons matter little to them as they know that anything longer than a 50mm stem is simply….wrong. Dogma? Worse. Marketing.

In addition to the many crazy things I hear about short stems, one persistent reason to choose short stems is that (they claim) the short stem reduces the body movement needed to execute a turn. This sounds nice. It looks to make sense. A quick drawing says it’s the case. In fact, it’s simply not true. In fact, depending on what you are looking for, it’s exactly the opposite.

Lets’ look at one recent article that showed up on my Facebook feed: How does stem length affect a bike’s steering and handling?

While pretty much everything in this article should be ignored as it is simply wrong, reference to one particular graphic makes a case for shorter stems.

To verbally explain the graphic, it shows that in making a 30 degree turn of the bars, it takes 52mm of movement with a 100mm stem compared to 26mm of movement if it were a 50mm stem. WOW!!!!! That’s TWICE AS MUCH movement! 100% more effort! Obviously, shorter stems are the best. Of course! Of course, this is the bike industry and an understanding of the full picture is rarely even attempted. The graphic is misleading and doesn’t explain the case.

What does this now tell us? It tells us that while the hand grip end is displaced 2% more overall with the 100mm stem, it ends up 3% closer to the rider. These are tiny numbers. I could harp on why this makes a longer stem more advantageous than the shorter one based on this but I wont because the difference is so small as to be insignificant when riding fast, off road, over rocks and roots, and simply trying to survive.

I’ve intentionally isolated the stem here to show a specific artifact of design. This is not an article on proper hand grip or front wheel position (people seem to be confused). I am not trying to show a simple ‘stem swap’, simply how things change when stem length changes outside of the bicycle system. Proper hand grip and front wheel position is another huge topic that will also break a lot of hearts at another time.

Here is a similar study worked out in 3D space. Two stems compared, a 120mm and a 40mm stem. 3x the difference in length! Notice what a miniscule effect it has on the actual change in grip position. 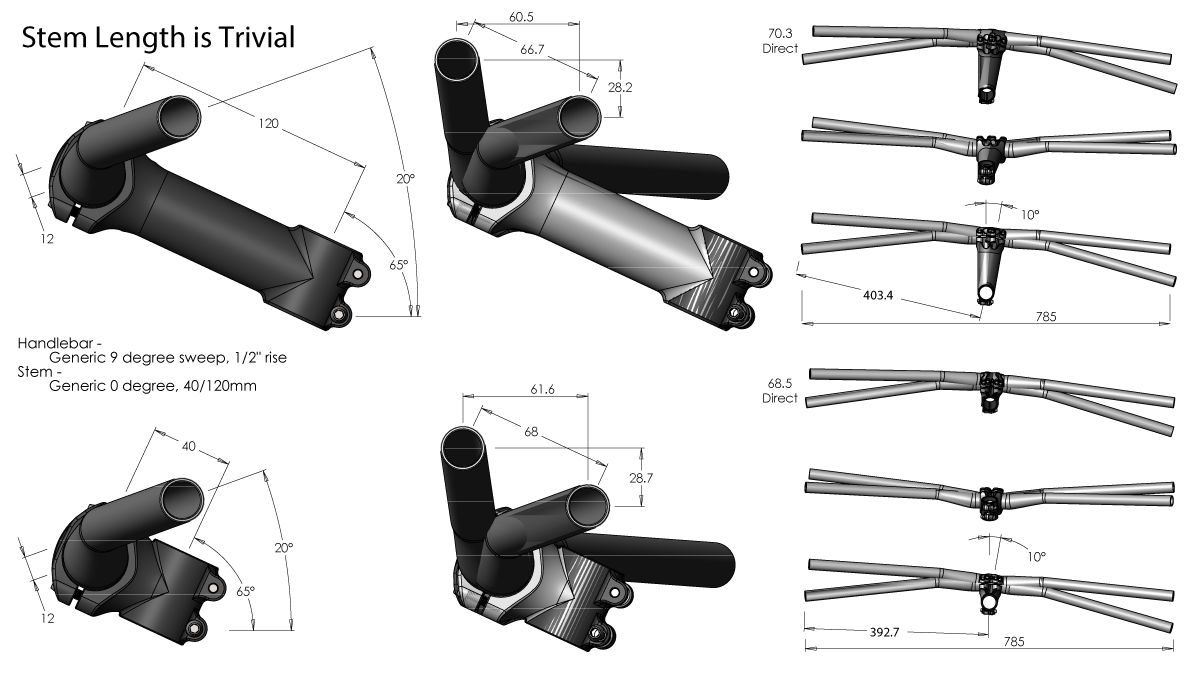 If you do not understand that stem length & top tube length are driven parameters (not driving) in a bicycle design then you should think long and hard before commenting about this post in other forums.