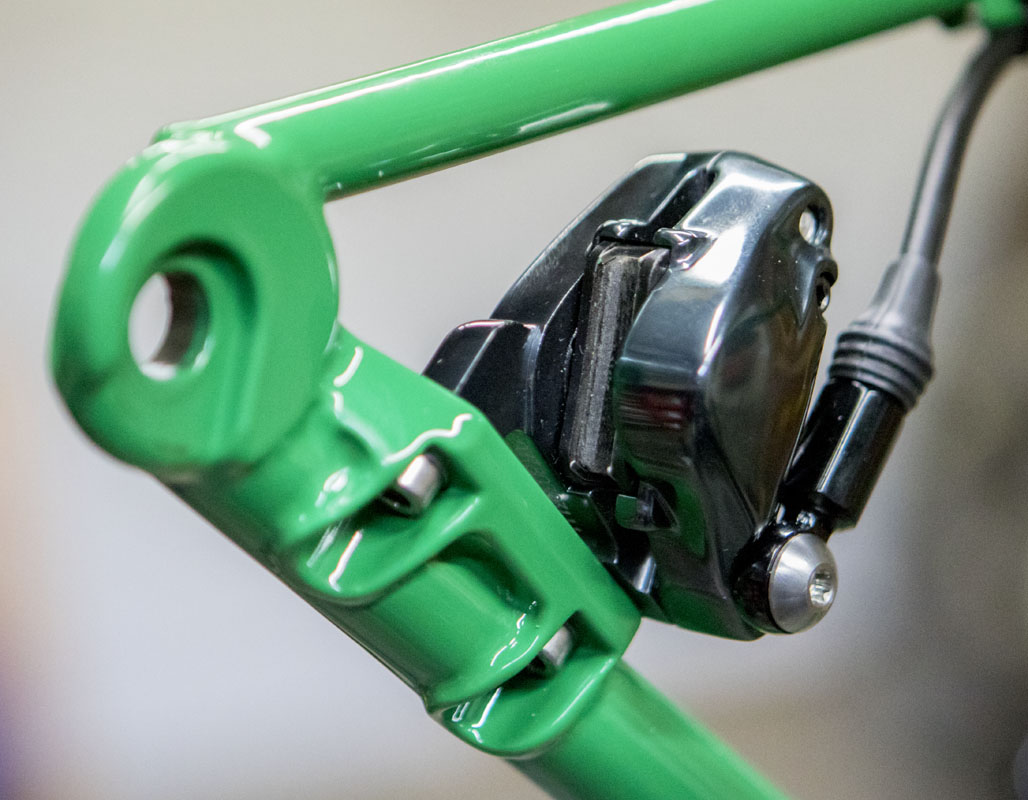 It has been a little slow posting here in PVD land. Not because nothing has been going on. Exactly the opposite. So much that my head is spinning.

A new bike. All-road 3.0. This bike has been the largest scale bike project that I’ve done in a while. So many details to be designed, engineered, contracted, re-contracted, tested. I nearly cried more than a few times. It came down to the wire to find out if everything really worked…and it did. 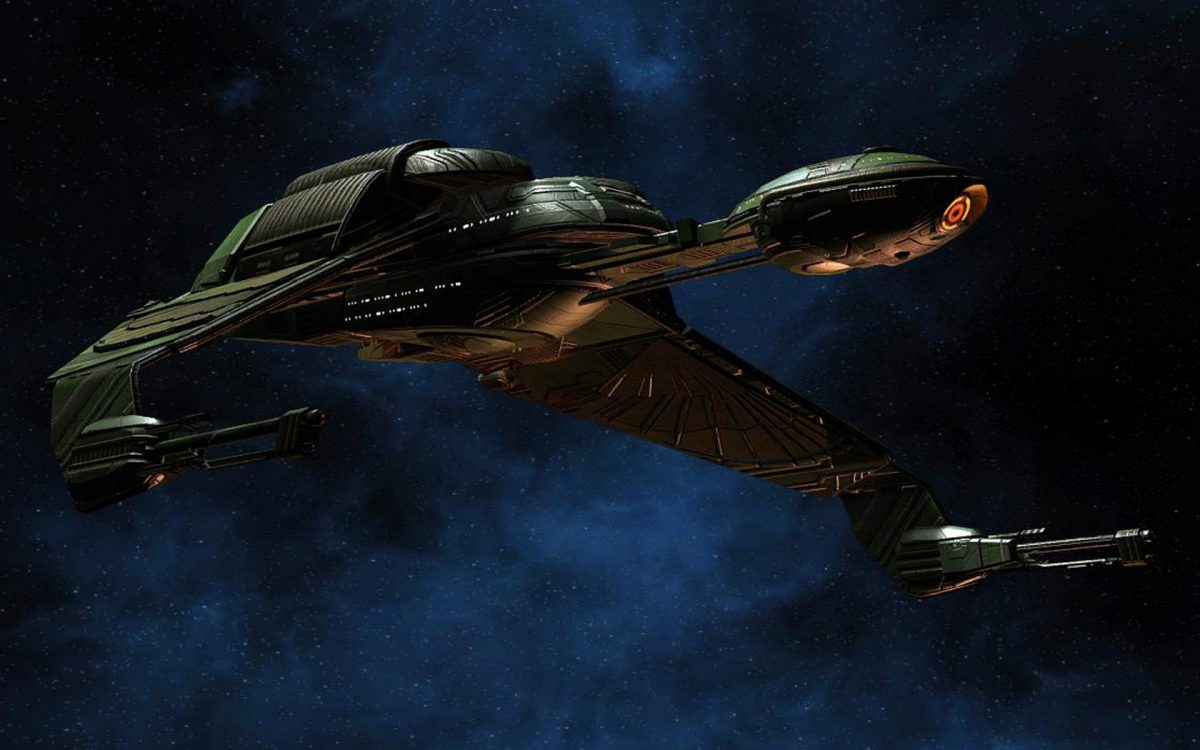 In the design phase this bike was called the Enterprise, but in the shop, as parts were cut (especially the seatstay yoke) it called out for something different. The original PVD Bird of Prey was made way back in 2009. It was a nice road bike with some festive touches, but this was before I got serious about geometry and the truly important details on a bicycle. Sadly, the Bird died a few years ago. Time to pull the name from the mothballs. 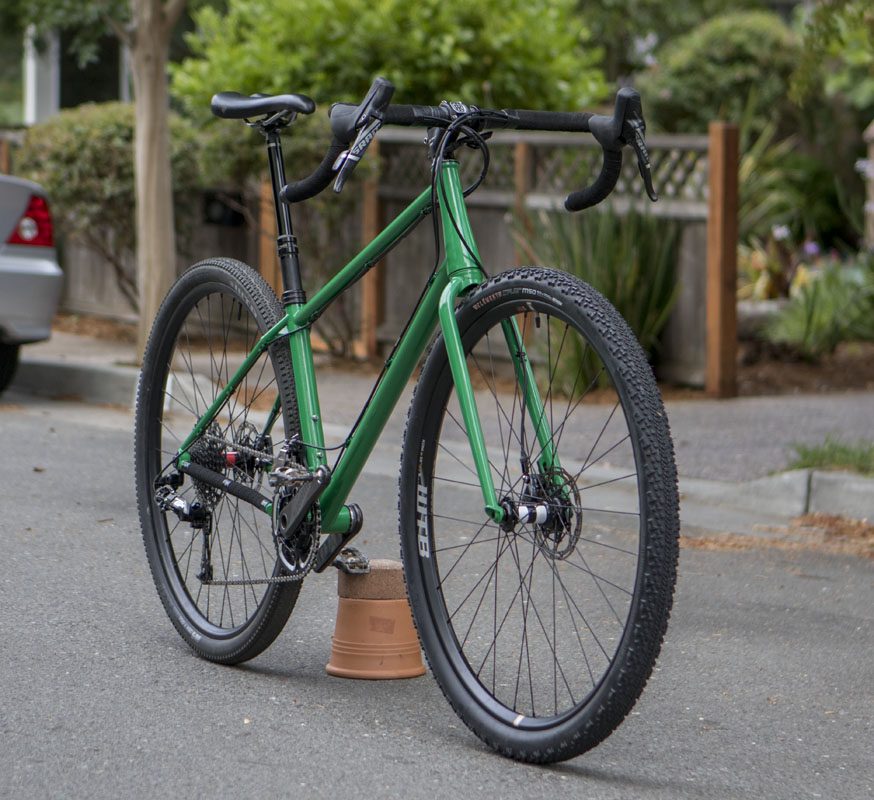 The seatstay yoke, resembling a Klingon Bird of Prey, gave the bike its inescapable name. And I really love this part. 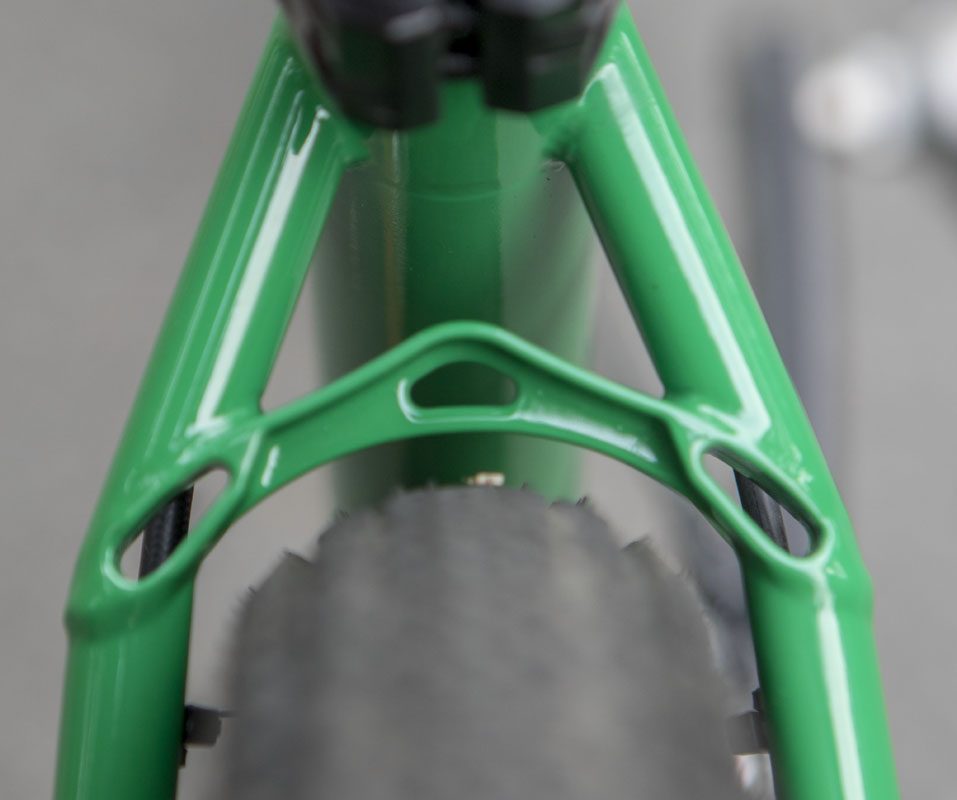 What makes this bike different than most? Rarely is so much going on during a single build. Even with countless hours of engineering, modeling, and planning, much went wrong in production. I re-contracted, re-prototyped and refined. It goes to show how the real world conflicts with one’s dreams. Producing this bike was a long and detailed project that somehow all worked out in the end.

Here’s a sample of what made this such a huge project:

The lessons drawn from the F-35 were integral to the evolution of this bike. I learned that while it was nice to have full size mountain bike tires on the bike, they weren’t very useful. Most performance gains of large tires cut out at about 42mm tires when using drop bars. You simply can’t ride fast enough on trail with the goofy bars to make the big tires worth lugging around. The bars are the limit of the design.

Also, the need for a larger gear range than a 1x system provides became obvious. All-Road means ALL ROADS. A bike can be geared with a single chainring for 420% (or 500%) reduction but real sacrifices are made in either the top or bottom end at key times in a varied ride. Reducing the tire size gives room for a double chainring and much more room to breathe. The 46/30 chainrings combined with 10-42 cassette makes for a 644% range. More real world riding will show what works best but initial tests confirm the improvement. As designed, the gearing goes from 10.2 to 1.6 MoD with 42mm tires. It’s been working out pretty good at the top end on pavement. Lows need testing off road. 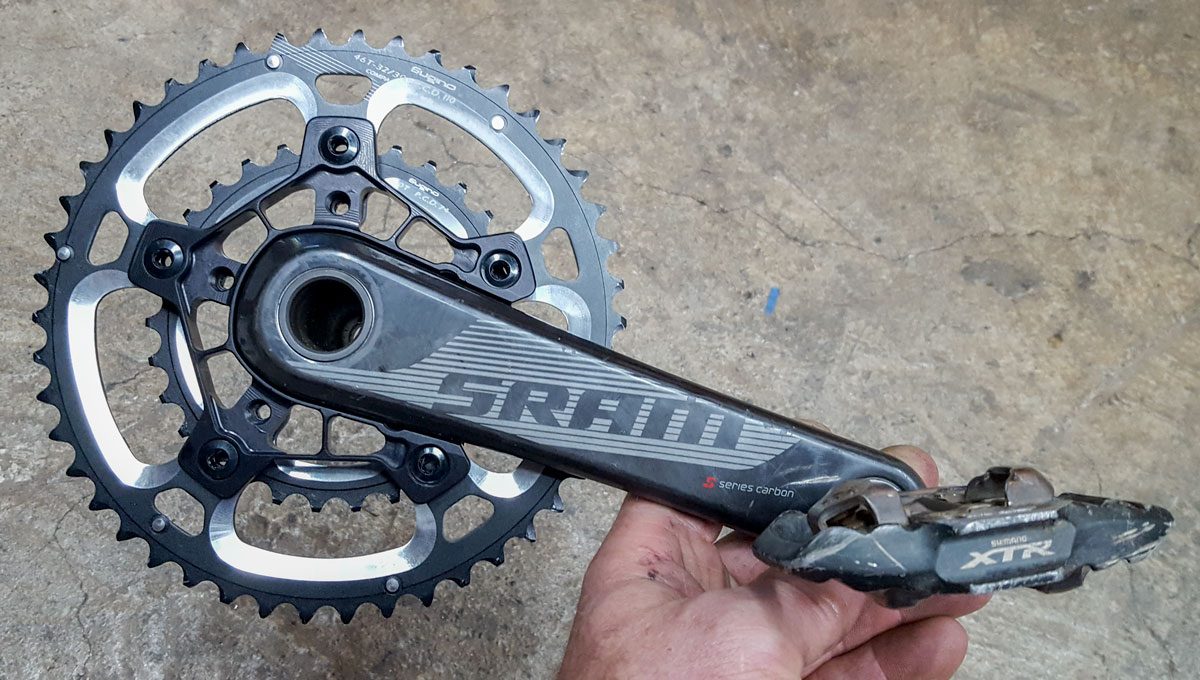 Certainly, putting a 100mm suspension fork on the F-35 was a wasted effort. At the speeds that can be ridden with the drop bars, the suspension gains didn’t net out. A good carbon fork and larger 54mm tires on the front are as much squish as is needed and useful on these types of bikes.

One thing that is important and without question is having a dropper post with real range. Here, a 170mm unit. I could go down to a 150mm stroke if I really had to. I have grown accustomed to the excellent functioning of the Revive posts and wish I had one to spare for this build — but the Reverb is a great alternative. With this, so much can be attempted on the bike, regardless of any other component choice. A better lever solution is needed — the top of bar is vastly inferior to hood placement.

The geometry of the F-35 was very aggressive. It was build for speed and to test the limits of design; comfort in the fit was put on the back burner. That aggressive geometry was dialed back a notch on the Bird of Prey, traded to gain all day rideabilty. The shorter fork  made it difficult to keep the nice front center without catastrophic head angle changes but I did what I could within the limits drop bars create.

A handlebar like the recently released Canyon Hover Bar (CP01) would have been a help here, allowing for the use of a longer front end and a shorter head tube. Few people realize the problems this bar solves. I doubt Canyon even knows. It is a real loss that the industry fails to recognize the potential of this configuration. It’s the stupid that decide in cycling, not the smart. The big problem with the Canyon bar is the integration of the stem. A real failure of engineering. Don’t integrate bars and stems. Don’t do that. 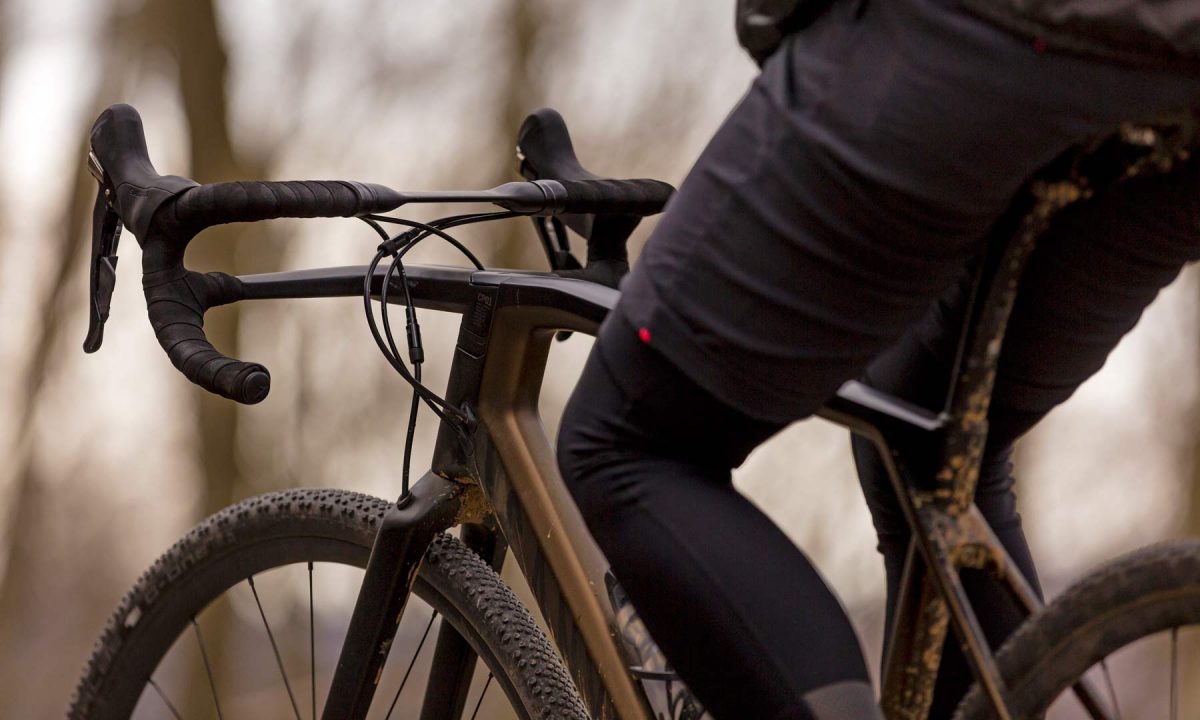 I did my best to balance the needs of the many with the wants of the few.

A host of problems occurred in the machining of these parts. Problems with getting it done. A last minute back out of a contractor left me scrambling to find someone to cut the yokes and head tubes. A few re-designs and cash lubricated the wheels of progress.

Luckily, the waterjet work didn’t slow anything down (Thanks Ronen!). I used the waterjet to prototype two or three iterations of the brake mounts. Waterjet is the new king of tools. With only a small amount of post machining, I had some pretty trick parts going live. I continued to develop the brake mounts and they will be machined for the next frame. Still, they are now a very mature design.

The spiders took a long time to get but the wait was worth it. Custom is cool.

I learned a few cool tricks. The 3D Print FEA method is pretty rad. Essentially, stressing a plastic 3D printed part in hand and looking at where the strain shows up visually. In this way, I can find geometries that are strong even in the flimsy medium, then take that geometry to a machined part. It’s very cool for complex parts. 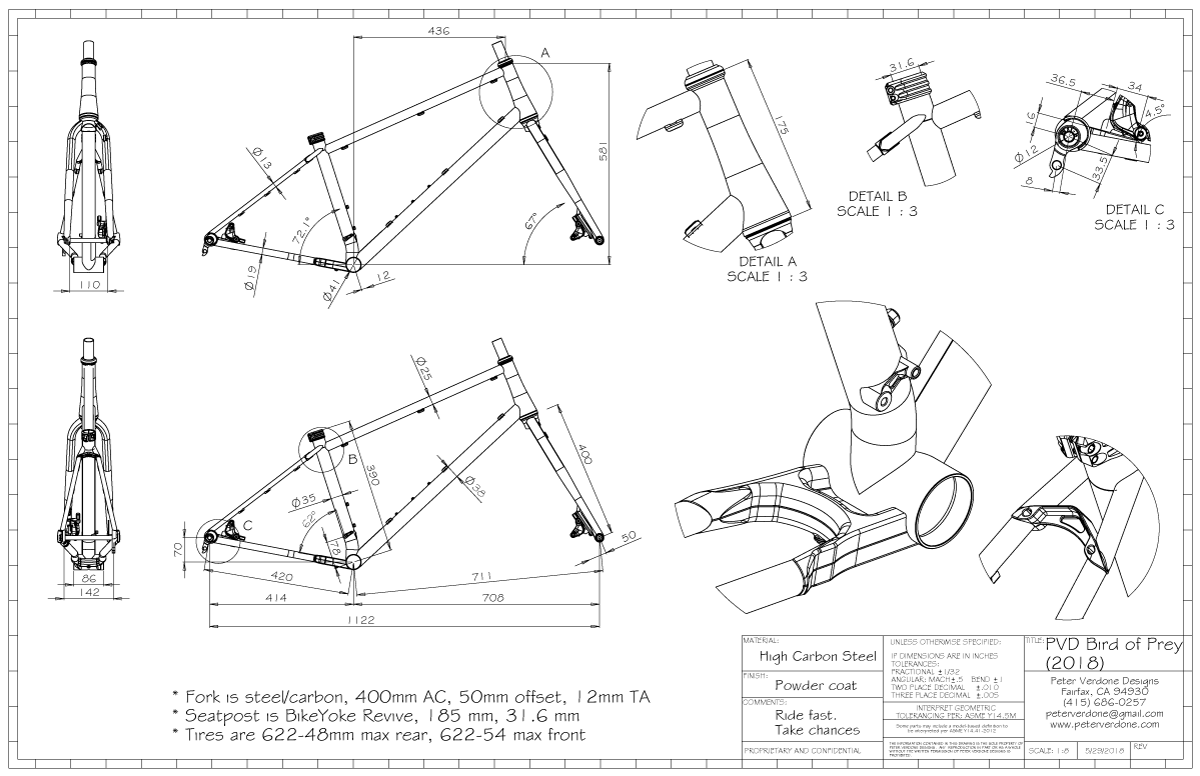 I wanted this to be a complete frameset and so put a ton of work into the fork. Also, I wanted to see what could be done with the flat caliper mount. Traditionally, fork blade availability is a big problem for progressive design. I worked with Lon at Nova to get modern fork blades produced. We traded theories on what would sell, what could be made, and what was needed. He let me work with the only prototype blades he had. I hope we can keep working on these issues, as many builders will benefit.

Paint: RAL 6029 Mint Green & Axalta Crystal Clear PFC400S9. There was a small coverage issue at the top of the fork that will be resolved next time I have a fork like this painted. It was some faulty communication and decision making on both my and my painter’s parts. No real foul, just learning. Also, the drain hole could have been plugged better to provide a cleaner look. 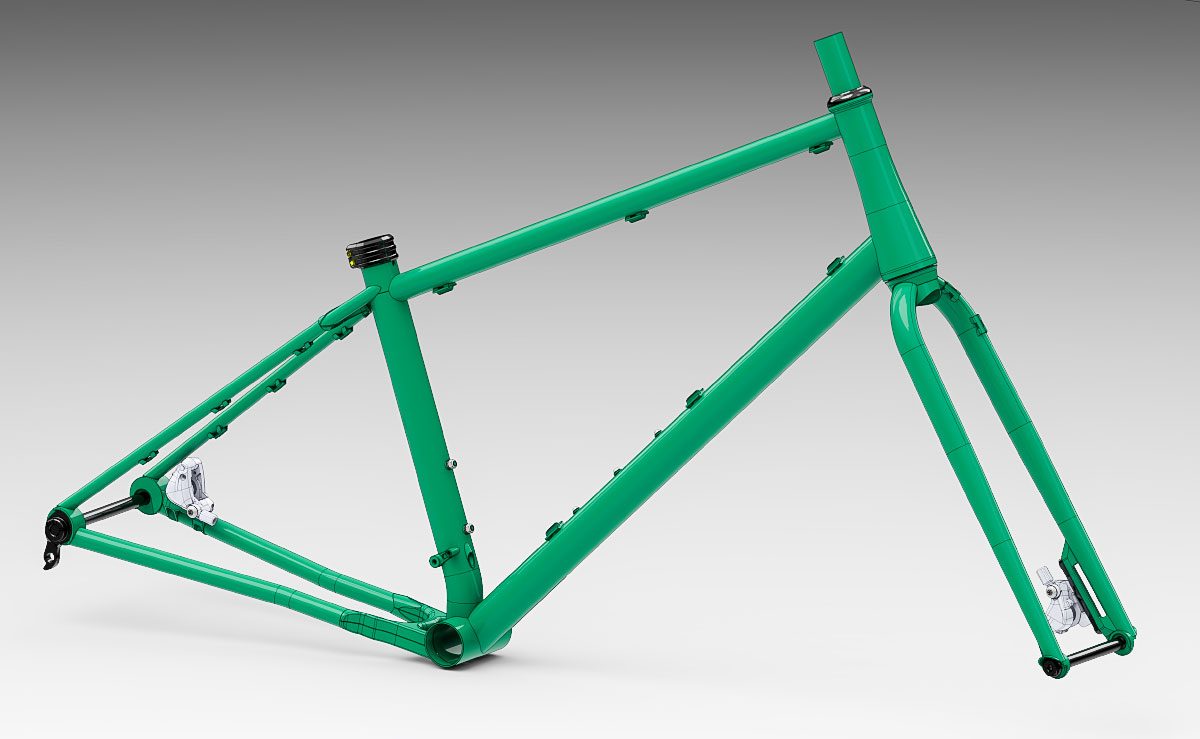 The real star of the show here is the most subtle. The knowledgeable and careful observer will notice that the drivetrain on this bike is most unusual. First, the spider that holds a sub-compact pair of rings to a narrow 145mm Q SRAM Force crank and the fancy Japanese 110/74 rings mounted to it. Then, the SRAM Force 22 shifters aren’t connected to the specified derailleurs. On the front, the shifter is driving a Shimano XTR E-type side swing derailleur on a 46/32 road chainwheel. Give this a try. It’s not possible…..or is it? In the rear, the 11 speed shifter is working a SRAM GX10 derailleur, up to a 42 tooth sprocket. Smooth and easy. These gearing developments address issues that have been ignored in the market. Hopefully, product managers are paying attention here. This is some important stuff. 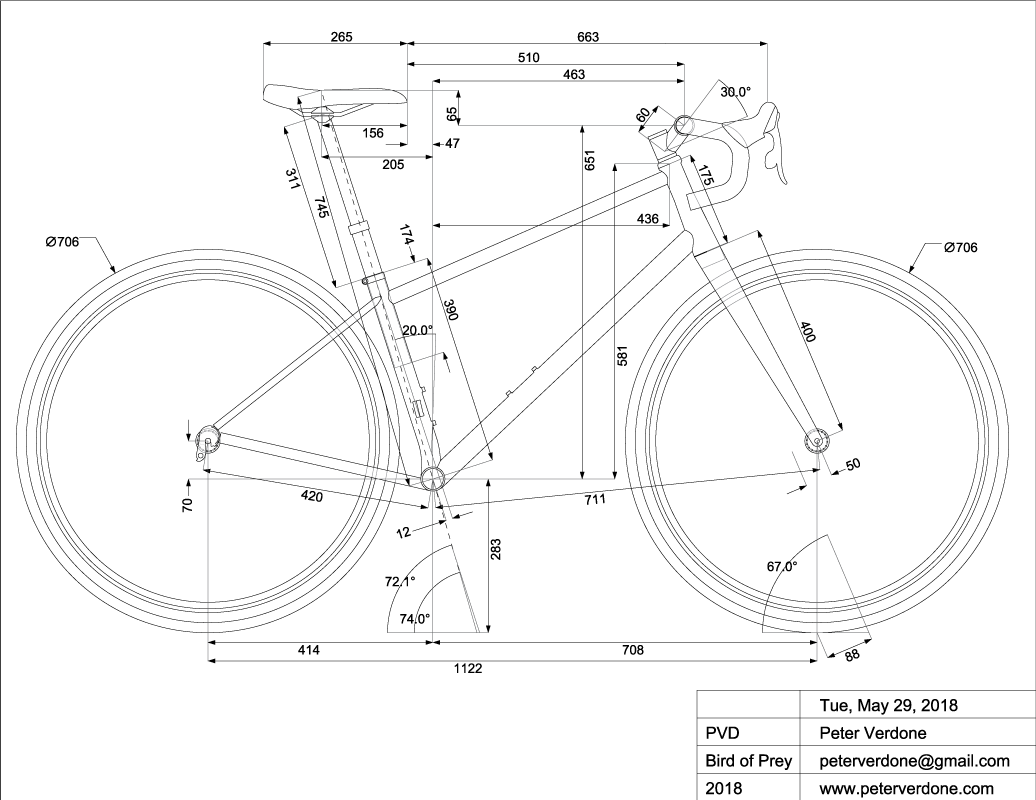 I finally get to show a brand new bike with the custom seat tube binder that I designed for Drew at Engin. This is a really cool part that is now in use on my bikes. It’s special for spreading out clamping loads in dropper seatpost applications. It also looks super trick. 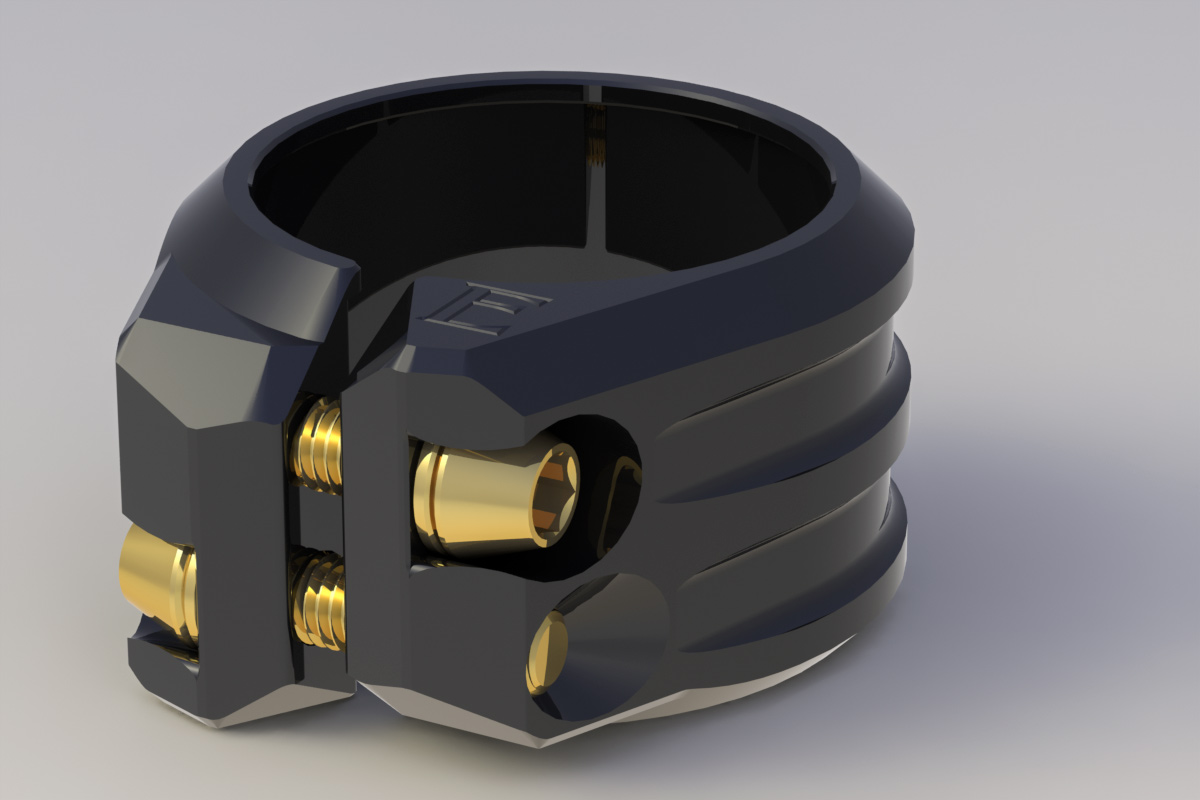 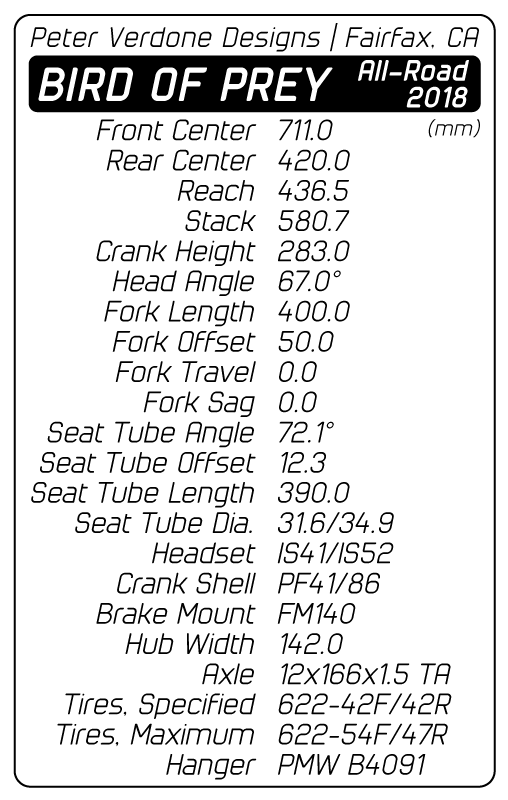 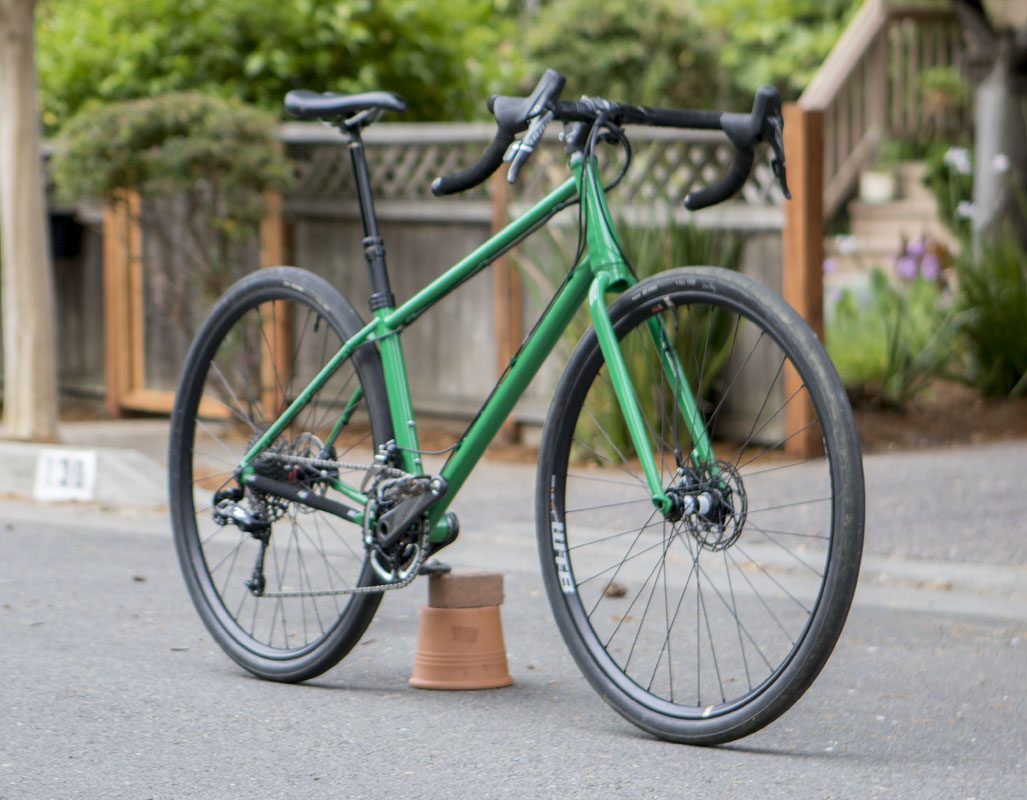 A 1mm spacer will need to be added behind the cassette to help the maxed out derailleur shift into the largest cog. The shifting was perfect prior to paint but with the increased thickness, it needs that little extra.

The dropper lever placement (on the top of the bar) really sucks. The 1x STI style lever was the best but with the addition of front shifting, that can’t be done. Some way of actuating the dropper from the hoods needs to be sorted.

Other than that, I’m excited for more saddle time. The bike is less edgy and more comfortable than the F-35 and far more elegant. The 644% gearing is great, far better than the 420% gearing in 1x configuration. It really just feels nicer than the 1x did. It is understood that the GX 2X shifter could use some work as it is a bit of history at this point.

After some more riding with the steel fork, I’ll go to the carbon fork for a bit more comfort. First, I want to complete testing the Nova blades and the PVD FM-F caliper mounting.

Special thanks to Mark Norstad, Lon Kennedy, Don Ferris, Drew Guldalian, Devin Bodony, Ronen Sarig, Nick Heys, and a host of others. Without their help I could never have got this done.

I’ve been moving the saddle up as I’ve been riding it. I normally run 745mm for road but 755mm is feeling better right now. Not sure why.

I fixed an issue with the rear shifting. It wasn’t possible to use a spacer but I found the problem and made a fix. Good shifting now.

The bike is feeling very nice. Still thinking of the fore/aft balance. Hard to move rearward with the losses that will come with it. I’m on the razors edge of fast and comfortable.

The dropper lever is driving me crazy. Something needs to be done. It’s horrible on top of the bars.

I got the carbon fork on. It looks very nice. Dedaccaia F-56 DB. 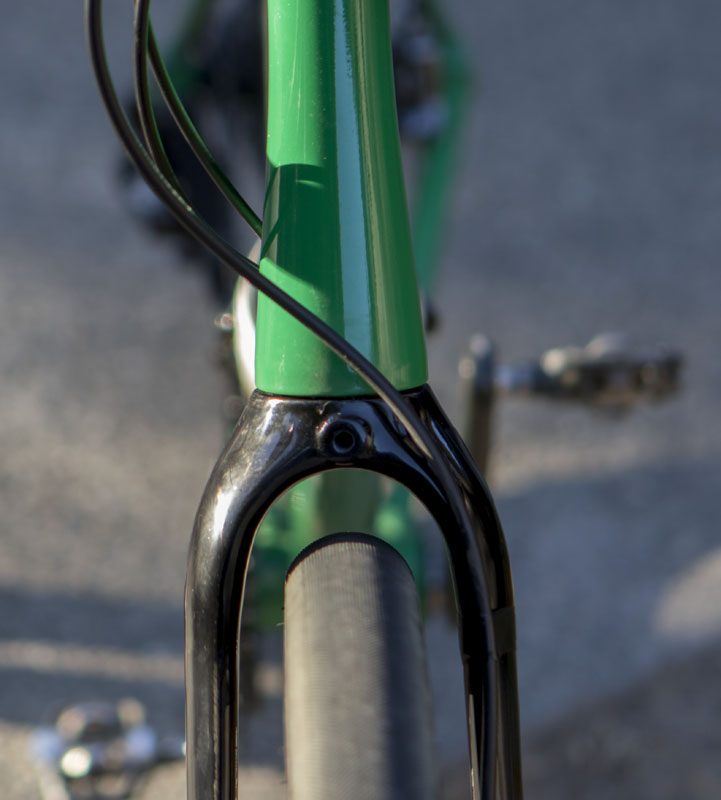 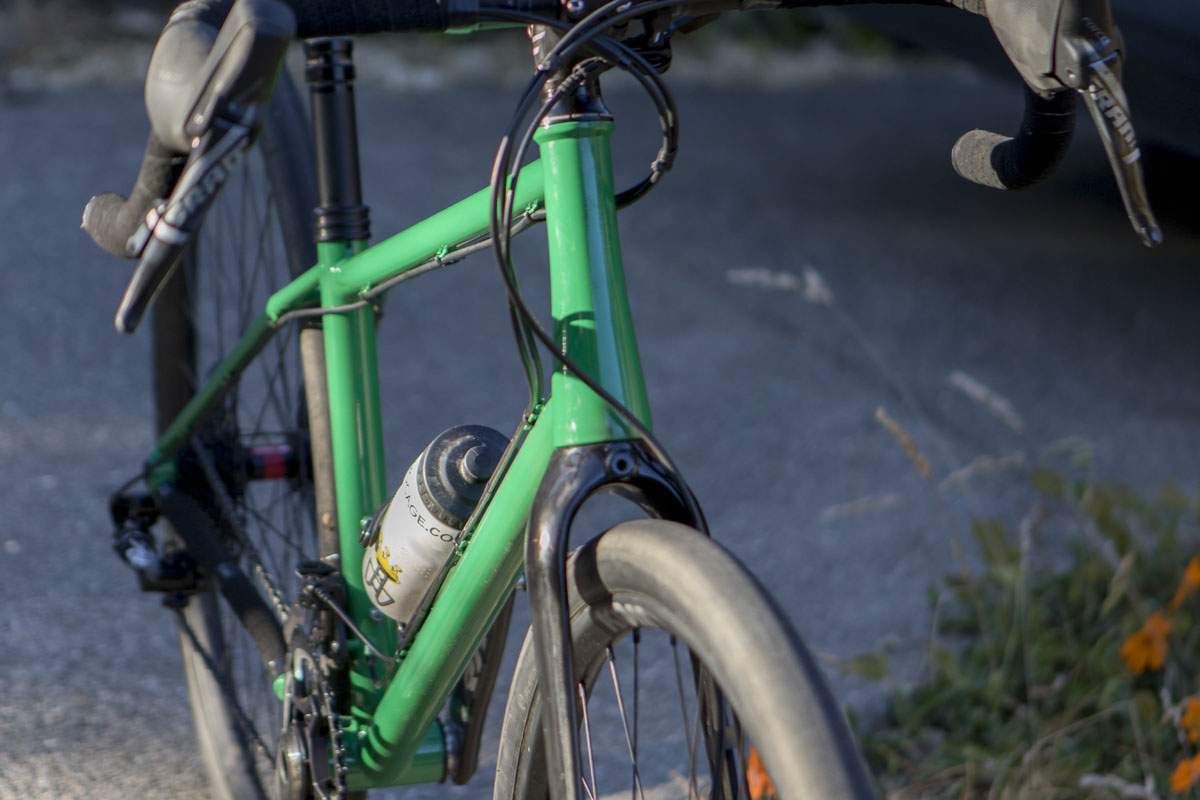 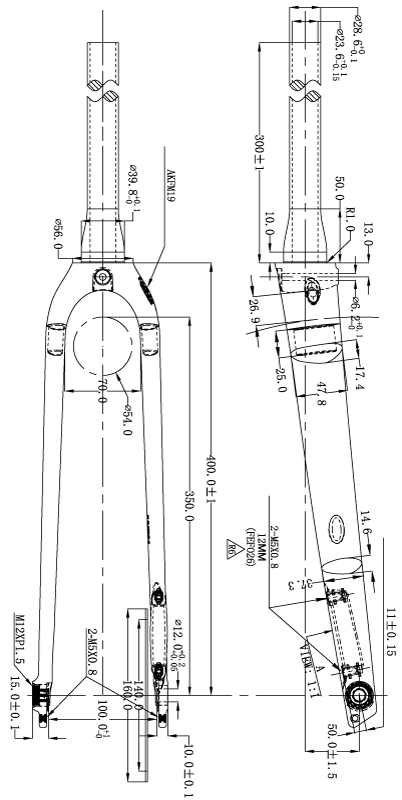