This weekend ended up having to turn out like this I guess. A thrill ride of adrenaline. Just what I like when I’m out having fun.

A week ago, I was on a small group ride in Marin. We were on a section of trail that is about as basic as it gets. Wide, groomed, multi-use path. Essentially simple and just a via to some real singletrack. I stopped to regroup with folks and saw a cool detail in front of me.

I noticed how a rock stuck out from the trail in a gentile corner. It had the look of a cliff drop on the other side. I was right. Better still, the landing area was perfect. A steep slope, clear and free of rocks or trees. The height of the drop went from around 7 feet to maybe 30. A lot of option lines in between. It was a thrilling find. Marin is full of technical singletrack coated with tight roots and rocks but big drops and jumps are more rare.

I was on my little 29er XC hardtail at the time and the mood of the ride didn’t call for this level of risk so I had to leave it behind. I took some recon photos, though, and mailed them off to Ronen to tempt him as well. He was tempted.

We made a plan to ride this this past Saturday. Hooking up with Brian, we headed up the hill with cameras and armor. Neither of them believed that the drop could be as good as I described. I was beginning to wonder myself at one point. I mean, this was the first time I’ve ever taken a full face helmet and body armor out on a Marin ride. I wanted to go as big as I could and I wanted a little insurance.

We get to the spot and surveyed it. The whole thing was just perfect. Such a clean setup. All we had to do was get a hard right turn in when landing to avoid an upper tree. This became a non-issue once we went bigger. 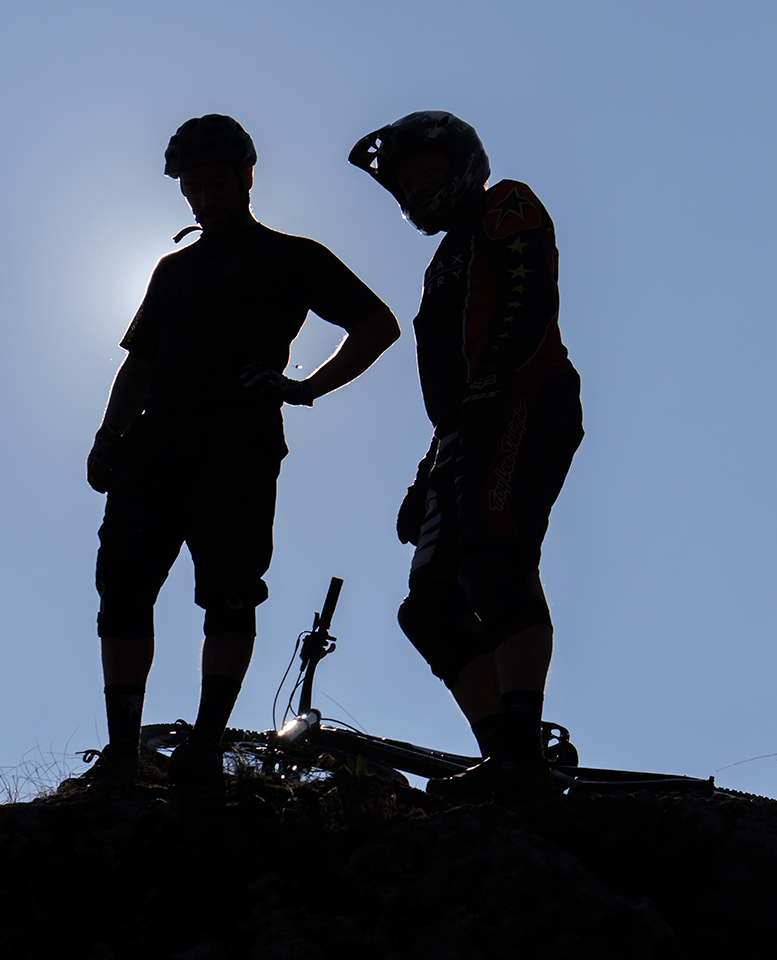 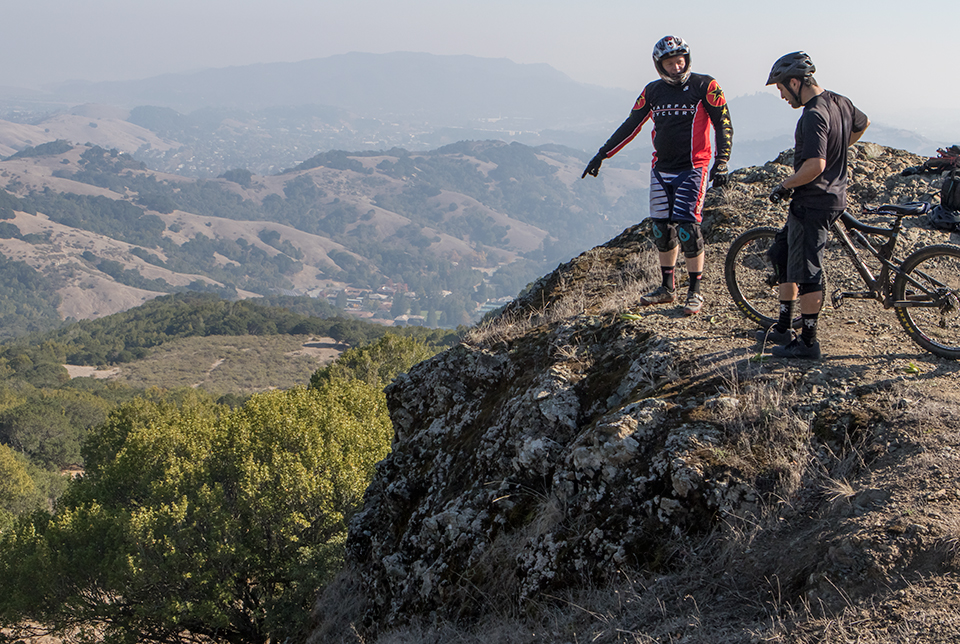 I finally mustered for the first hit. It was awesome. The landing felt like landing on a feather mattress even while riding a trail bike. I was powered for my next hit. Slowly, I went bigger and more solid. Building up to about 16′ of vertical drop. 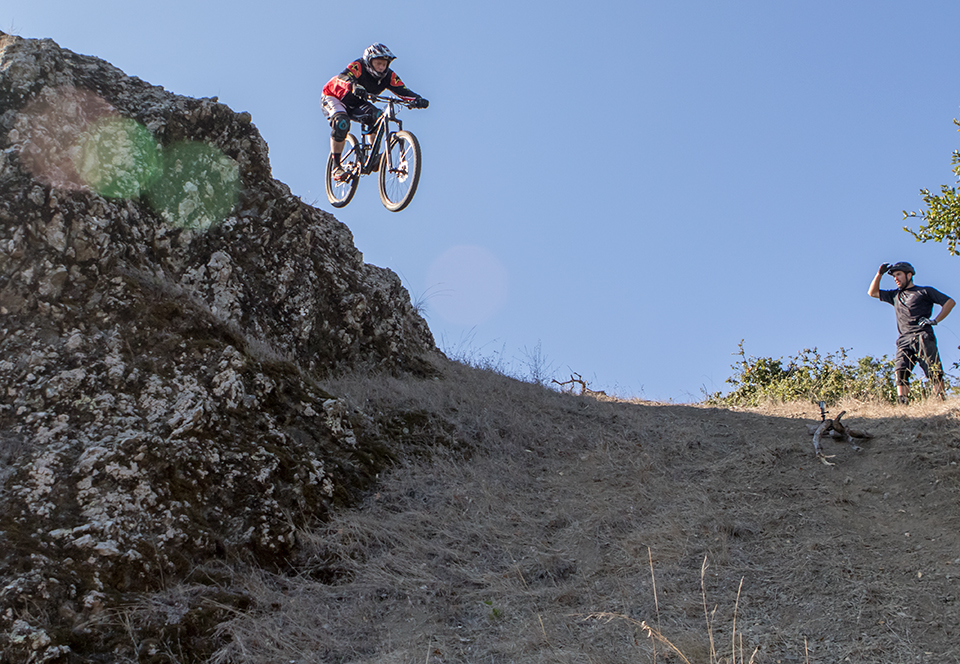 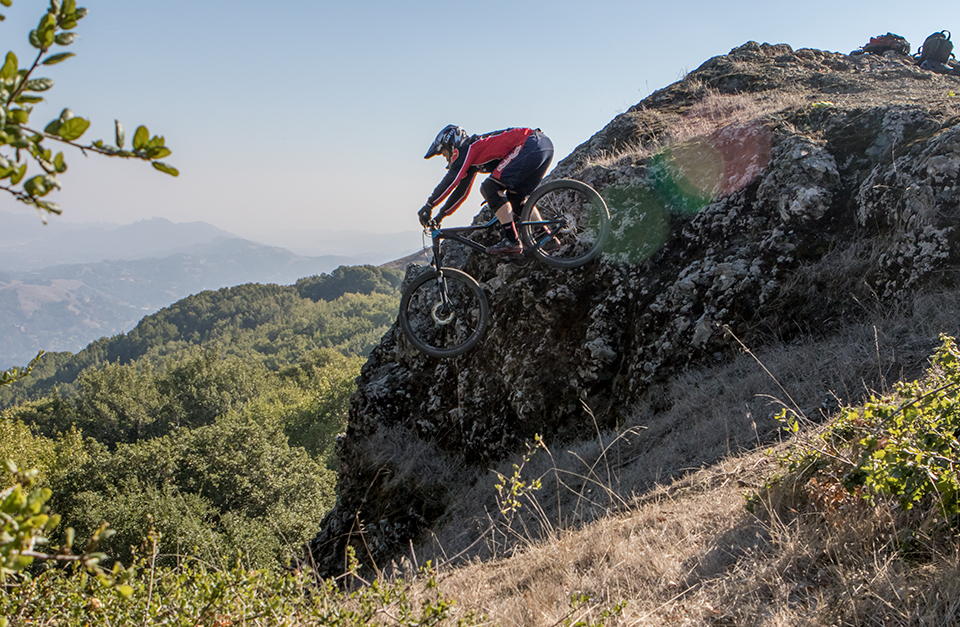 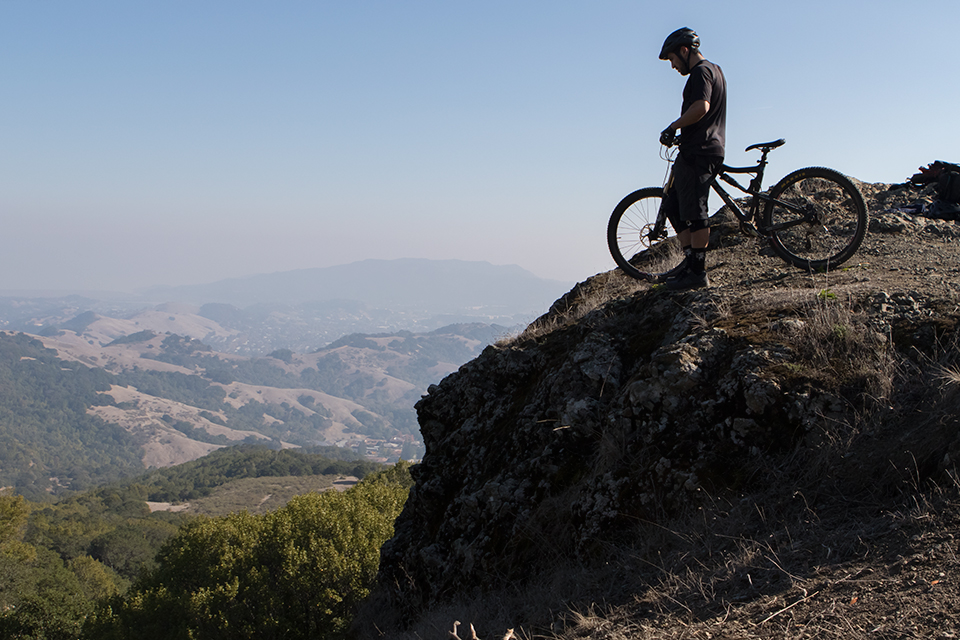 Ronen was determined to go to Rockville the next day. I was interested as well but after a night of hard rain into the early morning and very strong winds I was dubious about trail conditions for real big lines. I figured the gamble was a bit great. Other places are nicer if it’s really wet. After offers of China Camp, we still ended up going to Rockville. Luckily, this worked out.

Conditions were just on the damp side of perfect by the time we started throwing down. I had two hits on my list for the day; the waterfall drop clearing the knuckle and the water slide drop (full left). The dampness had me a little concerned but test hits proved that all was go ahead.

The waterfall drop really came together. I cleared the knuckle right after a test drop. In the end I was sending big and confident landing fast and smooth. The entry on this hit is the hardest part (like most in Rockville). Keeping up speed and staying smooth for takeoff is a challenge. The landing is cake. It’s a really fun drop once you clear the knuckle on the rock. It smooths out so much.

The waterslide drop is really a horse of a different color. Entering smoothly is really, really hard. The surface is very difficult off camber and slippery and covered with holes. Then you have to set up quickly for a drop into the slide. You can’t go too fast or you wont land with any room to corner off the slide. The drop is about 5 feet but the speed you exit with is very hard to control. You can hear my tires chirping in the video. It’s definitely not easy. Worse, I was hitting it in super hard wind. The second video shows how hard.

I can’t resist hitting Snake Bite Rock when at Rockville. It’s certainly the most technically challenging trail section in the bay area. A tough entry into a crazy rocky rooty slope followed immediately by a pair of 3 foot drops on top of each other. I’ve made this hit a bunch but on one time I went a little to the right coming down. This was too chunky and not good. It started a body rock that continued until I flattened myself into and over the last drop. Luckily, nothing bad other than a bruised forearm.