My day job puts me in the Physics & Astronomy Department at San Francisco State University. I’m primarily the department machinist and engineer. I teach a class sometimes which is nice, too. Pretty much, I help make sure our instruction and research folk are happy and have great tools. It’s a great gig. I have a machine shop and a computer and a tiny budget. I work with laser experiments, clean rooms, and fancy telescopes. I had a couple of cool jobs this summer, mainly for  the astronomy folks.

1. Pedestal for the new Orion HDX110 EQ-G equatorial mount: This was a long awaited upgrade for our 10″ Newtonian scope (Optical Craftsman, Focal length: 1651mm, Focal ratio: f /6.5). We use this for much of the photography that we do in house. The old mount and pedestal really sucked. Actually, it didn’t suck, but it was from what looked to be the early seventies and had issues. I’d been wanting to make a new pedestal for years and I finally got a chance. It turned out so awesome. Black crinkle coat FTW! Isolated from high frequency building vibration via polyurethane insulator. Gravitational level and angular adjustment to astronomical north are done in several stages to allow for coarse to fine control.

The old setup was pretty bad: 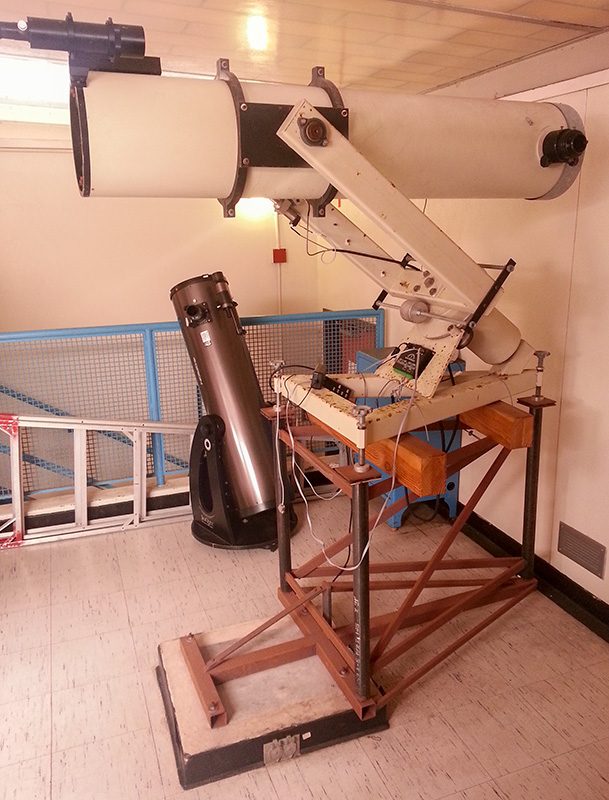 The base pad that connects to the frame of the building and the threaded studs were in place so I had to work with those as no good reason would allow me to drill more holes. I ended up welding the base in place to ensure a perfect fit on the bolts. The heavy structure was going to distort during welding and I needed to not mess around. Thank god for my Miller Dynasty 200!

The observatory has a sliding roof which is our real limit. We wanted the scope to be as high off the building as possible for more range in altitude, but not so much that it would prevent the roof from opening or closing for obvious reasons. Some planning ensured that less than an inch was provided for this when the scope is ‘parked’. The scope had to, also, not hit the wall by the base. Safe.

I included a couple of photos of our other tracking base. It’s red and super cool. Machinist types love to drool over this scope. 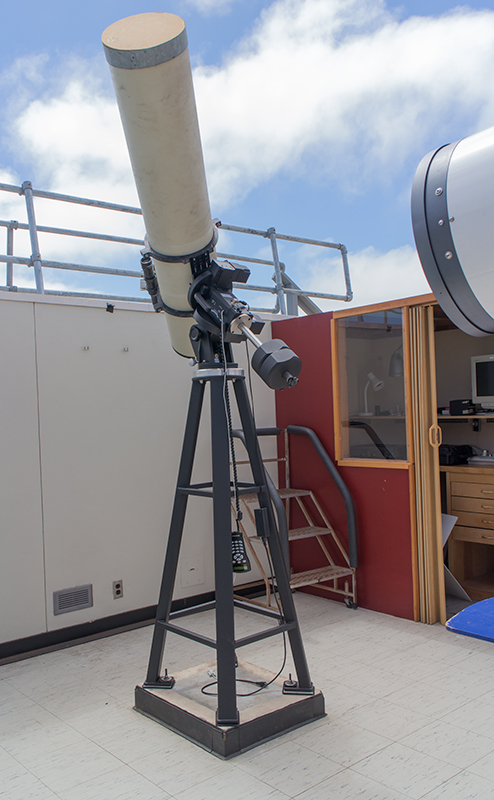 2. Tripod caster cart: For our large solar scope and tripod. This is moved outside during the day so that students can observe the sun safely. Thus, the caster cart needed to be very solid and heavy for smooth rolling over a variety of terrain we see on campus. It needed to be as large as possible while still squeezing through doorways. It looks pretty cool. Keeps the scope from sliding off and can be used as a base if needed (but not encouraged). 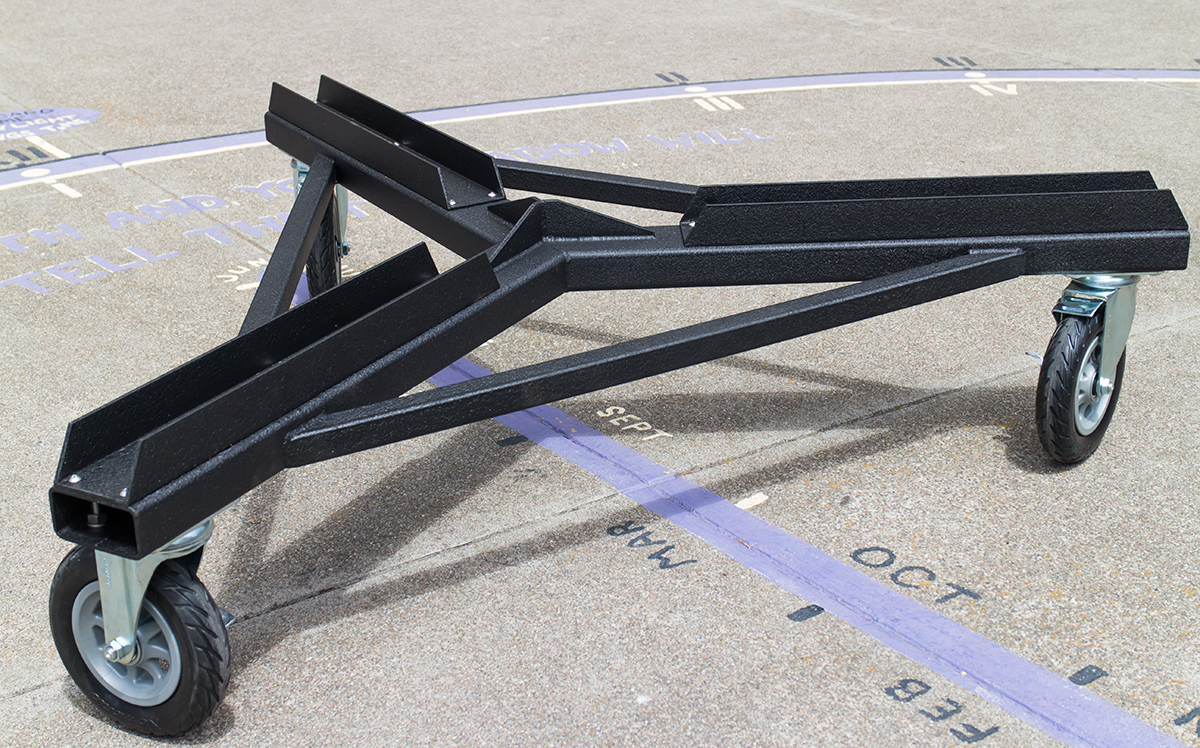 3. Solar telescope finder scope filter and mount: A cool little thing that involved some planning. I learned a lot on this. The trick was looking at the optics not for viewing through but for projecting on a screen. I could have done the design either way but the professor preferred this as it is the classical methodology. You can’t see the screen gradations that are lit by the sunlight. 50mm circular welding lens (#14) protects the eyes. 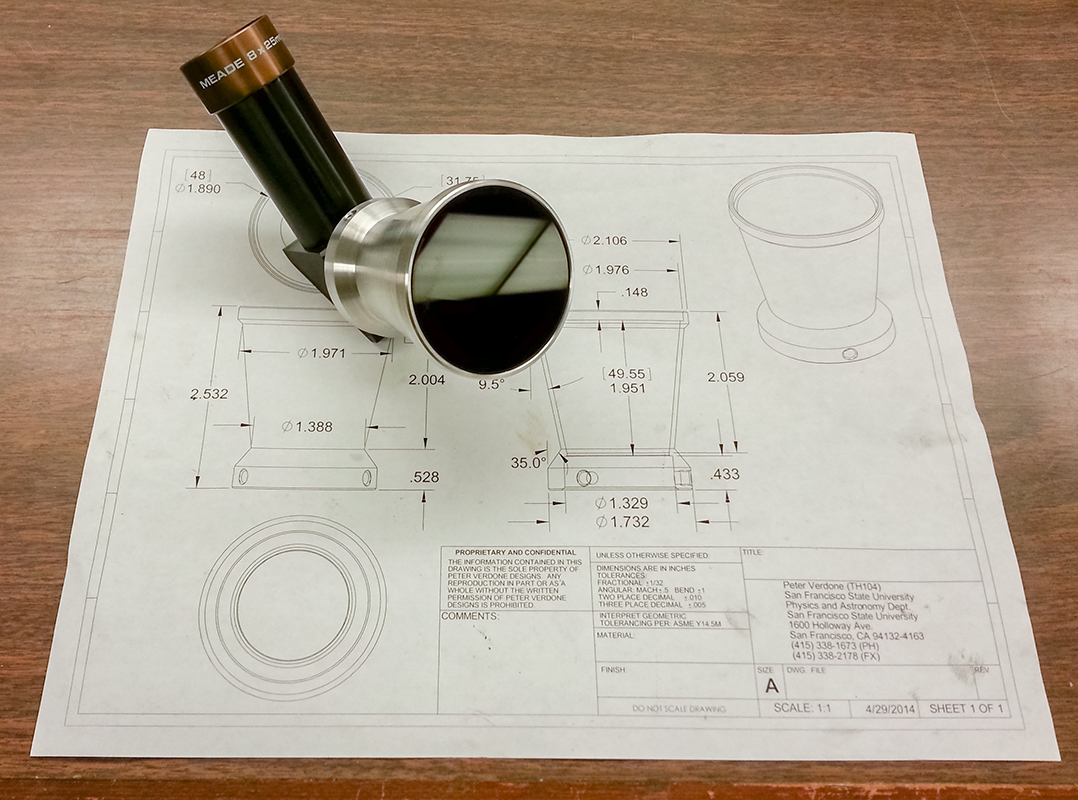