The time finally came (again) to have a big trail bike. This happens every now and then. The pendulum is always swinging. Sometimes you want to ride the 29er hardtail and sometimes the DH bike. Often, you want something in the middle…but what is that?

After 14 months on the Anthem 27.5 (mod), I wanted to start hitting trails a little differently. I wanted to ride with a little less savvy and a bit more aggression. I want to hit harder and have a solid bike behind me. I wanted some more rear travel for when things get loose, something like 125mm to 140mm. Even more, I definately wanted to run the fork at 160mm and have an even longer front center than the Anthem had. My old big bike had been sold last year after being ridden very little in recent years (not that that bike didn’t see tons of riding in the past) so I didn’t have anything in this class to draw from. After racing the Butcher at Sea Otter and another ride where it was really showing it’s age, I knew that the Butchers time was over. It’s amazing how dated a 2010 bike is now in the face of light, long travel bikes with big wheels.

I was tempted to get a Kona Process 153 but the sizing was a bit off for what I was looking for. Some of the pieces of the puzzle weren’t coming together for me and I couldn’t reconcile several factors. Still, the new Konas are amazing for what they are. Take a look as they may be perfect for you.

I ended up going with a 2015 Giant Trance 27.5, medium. Many people have referred to it as being almost the perfect trail bike. It’s an amazingly put together frame design. After all of the modifications I did, the bike really hits it’s marks. It looks like a war hammer…but a lighter and leaner war hammer than in years gone by. 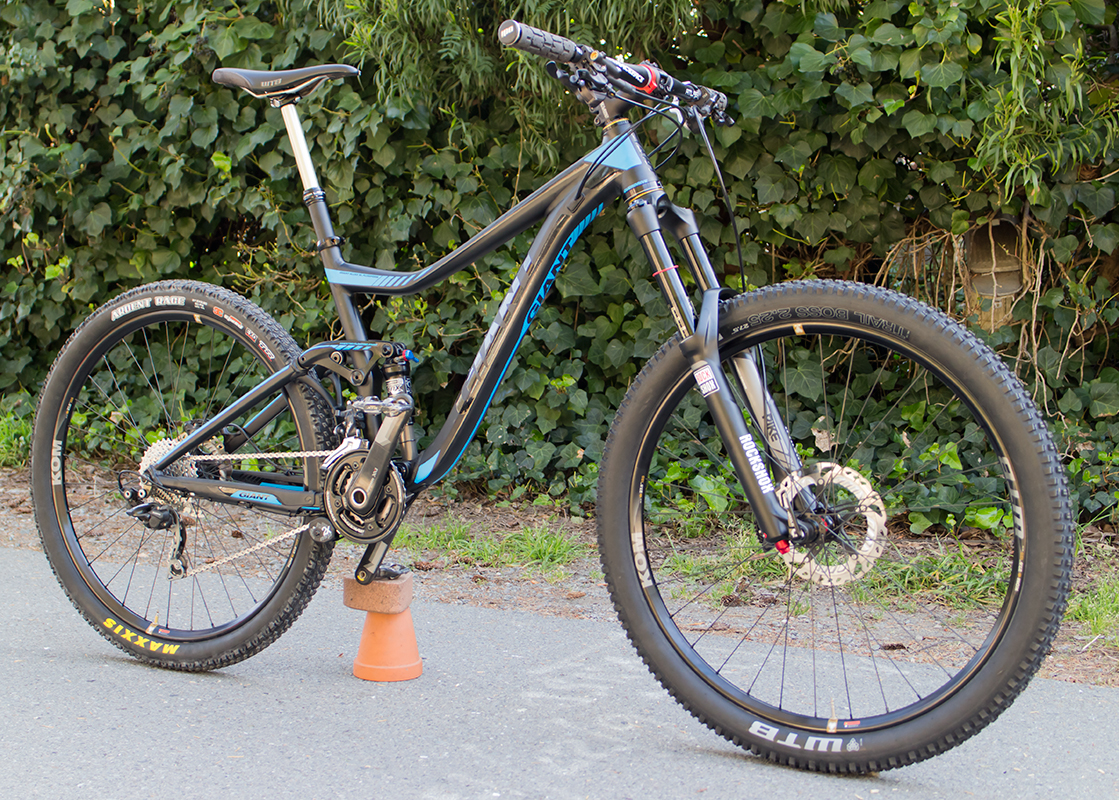 Every bike fit is somehow different. It’s always funny to see the difference from one to another. Measuring them helps you see this. Like children, not one is just like the other. I had based my initial build of this bike on how my Anthem and the test Nomad fit. Of course, the bike wanted what it wanted and this is what I got after some testing. It may change slightly over time. 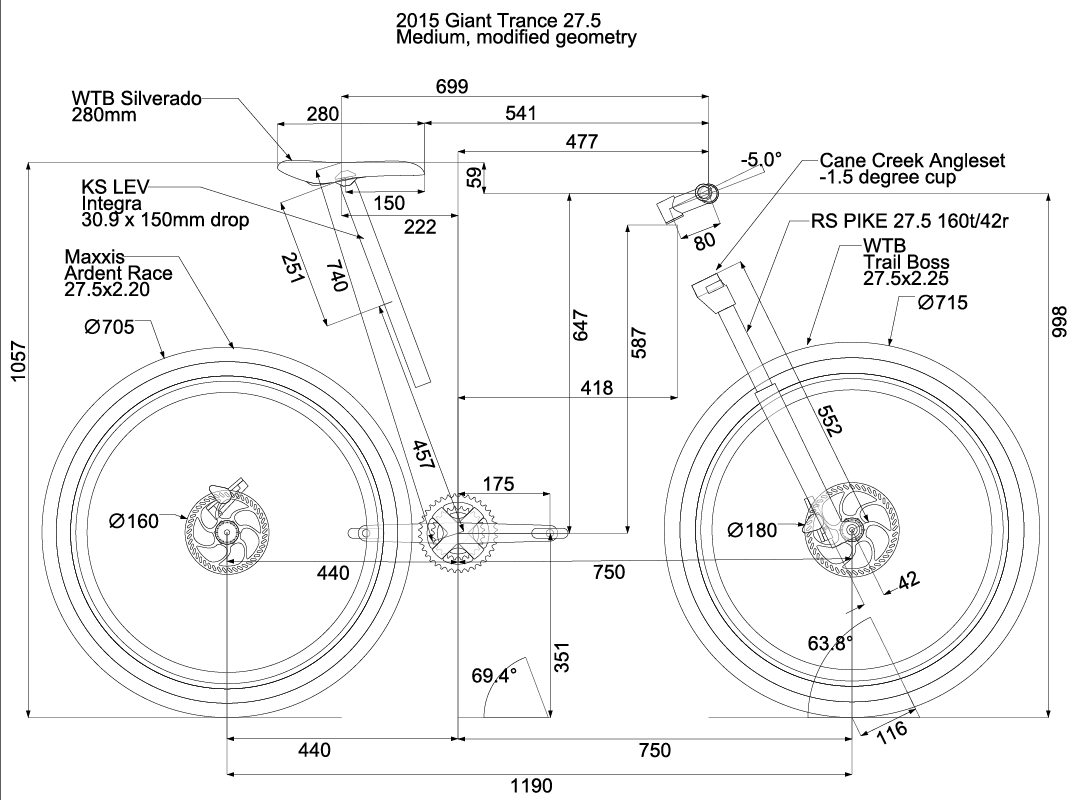 I’ve been using Anglesets on a few bikes lately. They help bridge a gap in current frame design and let me explore some interesting ideas. The key to the Angleset is knowing what they do. They move the wheel forward or rearward. Simple, eh? I moved the wheel on this bike full forward and it ended up being 10mm longer (with a larger wheel) than my 2013 Giant Glory DH bike. This puts my front center right in between what a medium and a large Nomad 3 are. Amazing that that’s where trail bikes are now. 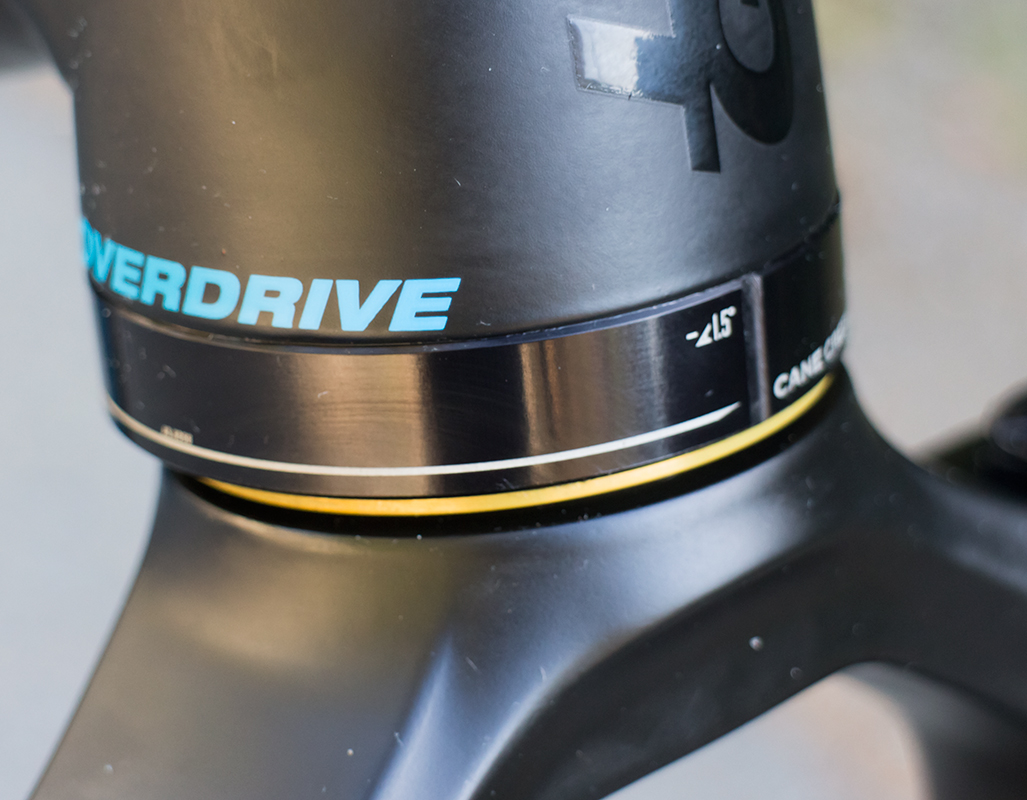 Of course, setting up the handlebars properly means interference with the top tube. Many people shy away from proper handlebar placement for this reason but I learned long ago that this is not a smart way to go. It’s is an important concern but one to understand fully. I added this armor after taking most of my photos. After setting the bars exactly after test riding, the shifters could now strike the bars in a crash. Preventative medicine! 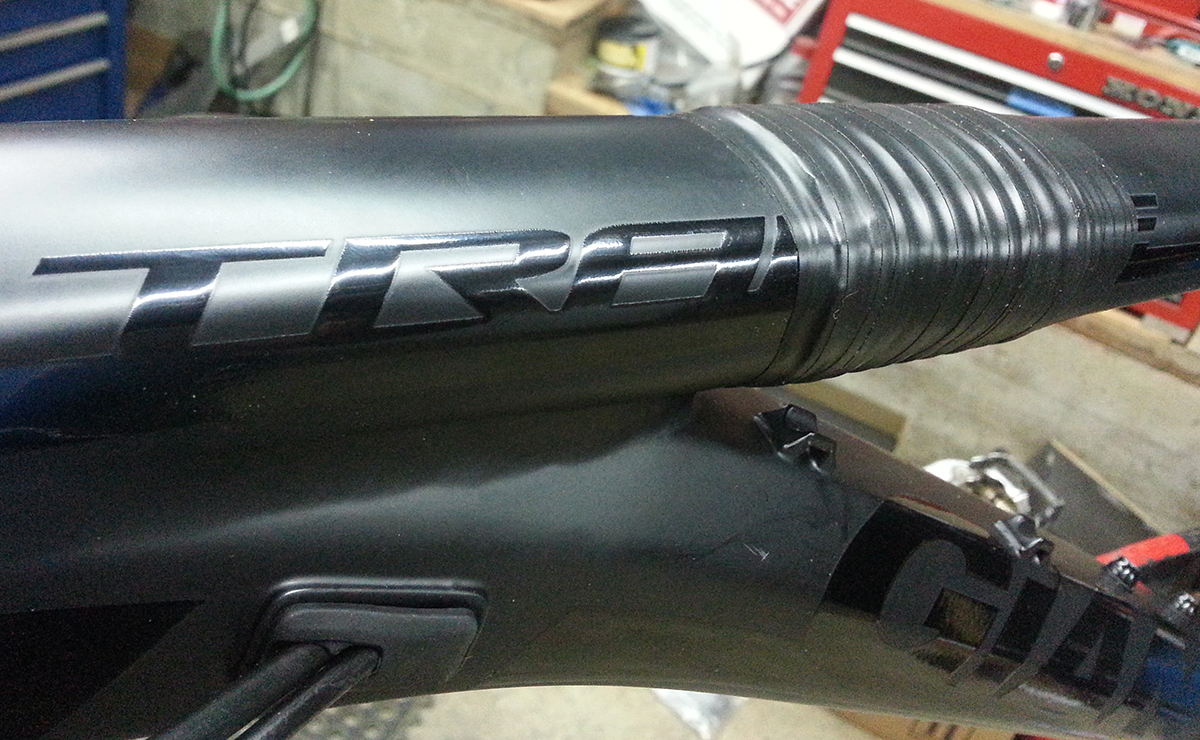 I ended up running a 80mm/-5 stem without any spacers (changed after photos and test ride) to get the handlebars in a nice position for trail bike use. I’m tempted to add a 5mm spacer but I’d rather err on the side of better climbing with a trail bike. I was looking for ‘just enough’ climbing quality rather than how the Anthem was run as a ‘very good’ climber. I’m certainly reserving a bit more for descending. By going with a medium frame and extended front center, I end up with a very aggressive descender and pretty good climber, much like using a large frame (racer style). The advantage to using the medium (instead of a large) this way is it allows me to still shorten the stem (like the GAP 45mm) for DH days, much like I did this weekend when we went to Pacifica. I get a killer downhill riding position that wouldn’t be possible running a larger frame. There is a method to the madness folks. I’ve got a huge amount of usable range in this frame. 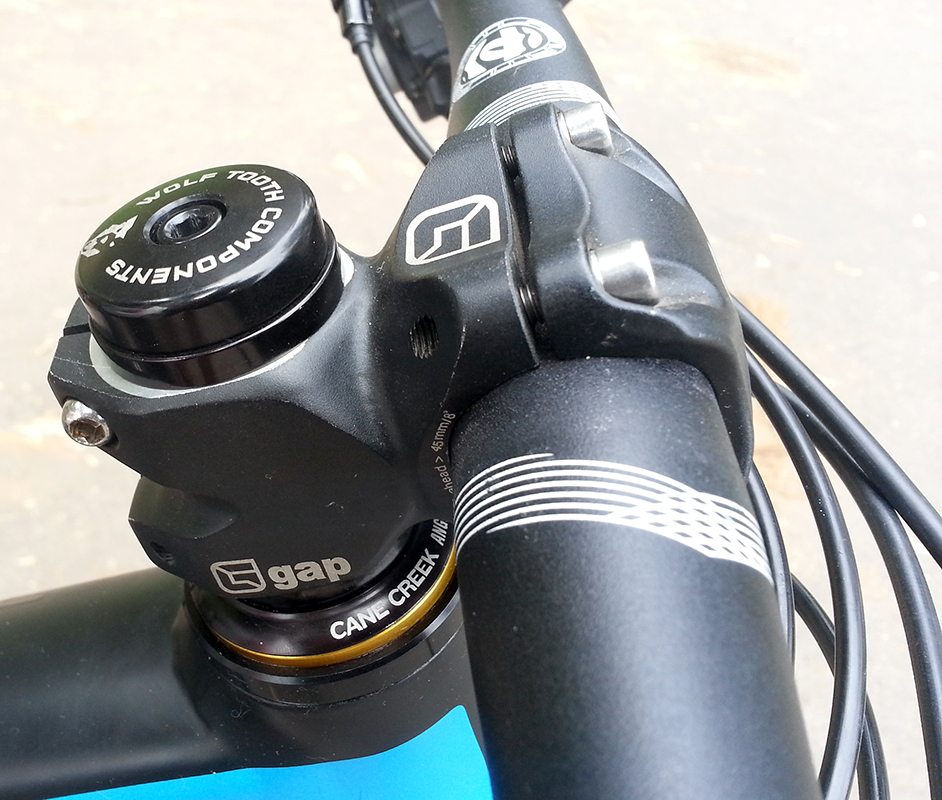 Other Cool Things about the Trance

* Heli-coiled brake boss lugs! So rad! Totally aerospace style. This is what you see when you work on really snazzy stuff. 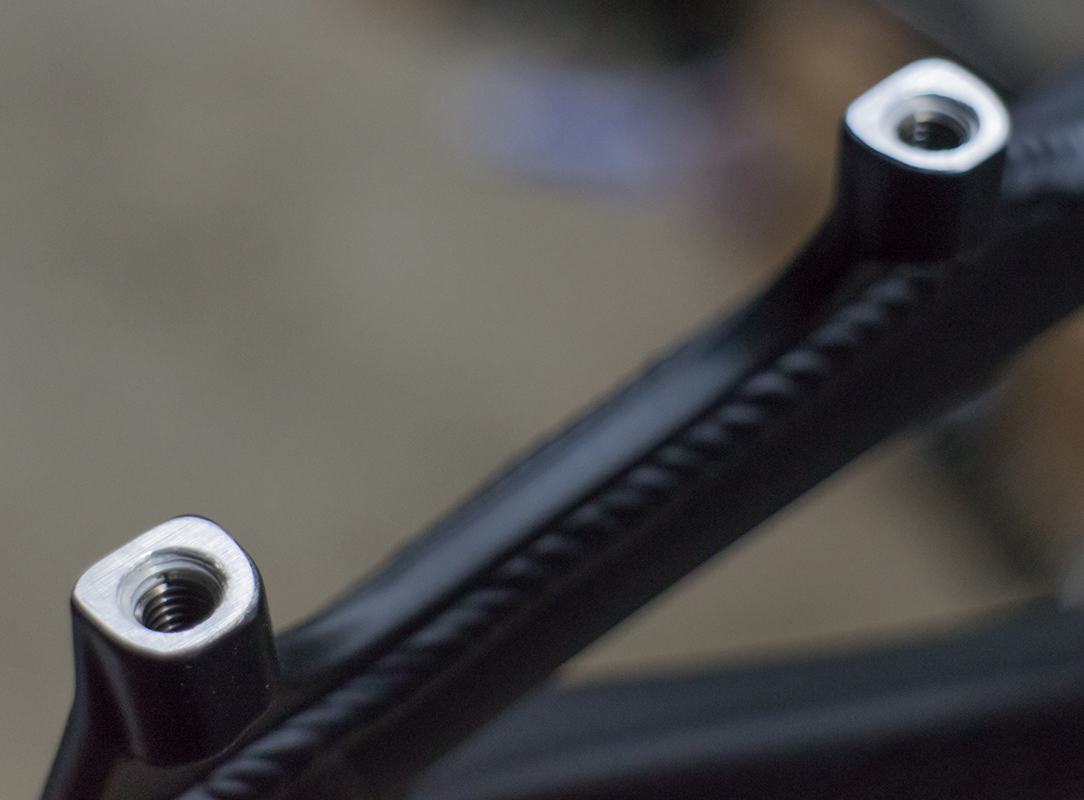 * Turns into a 160mm rear bike with removal of a spacer or shock change. The stock bike comes with a 200x51mm shock. Change that to 200x57mm and you have just gone from 140mm to 156mm, adding 16mm to the bottom of the travel. It doesn’t affect the initial height of the bike. There are special concerns with small frames and piggy back shocks so be careful.

Problematic Issues With the Trance

Some notes on parts choices

The stock Fox CTD shock is pretty lousy when using the bike in a broad range of conditions. For a novice, I’m sure it’s fine. I found that running the shock at 190 psi with a medium (0.4 in.3) volume spacer made a world of difference with the overall feel of the rear end. See the Fox Rulebook. The shock comes with a small (0.2 in.3) installed. It’s just not enough when hitting hard. 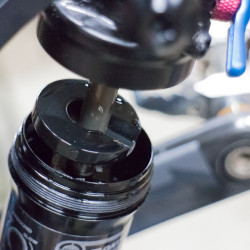 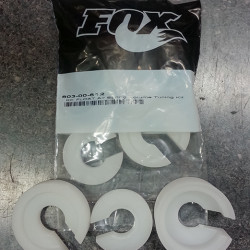 I decided to order a CCDB Inline for the rear to give me full control over the rear of the bike. I was torn between the Inline and the Rockshox Monarch Plus RC3 DebonAir shock but decided on the Inline because of the full range of damper adjustment. It’s a 200x57mm unit so the bike will have 156mm of travel but I’m going to be setting it up very progressively to keep it a lively climber that still takes big hits. Here’s a print of the shock.

I may try to short stroke the shock if the bike proves to still ride too high with the shock set for longer travel. It’s to hard to speculate at this point but I do know that the Nomad is simply too low for trail at 338mm. A 196mm shock would bring the rear end down 10mm. That’s what I mean about short stroking. Essentially, the same bottom point but lower top. Travel would reduce from 156 to 145mm.

The bike seems awesome. It doesn’t climb as well as the Anthem did and it rides higher. That’s not to say it climbs poorly. It’s pretty good, just not super. Once the air pressure was worked out I rode a loop around Tamarancho with the damper fully open and it didn’t ride like a complete pig, a good sign as I typically rode the Anthem fully open. It’s a light bike that takes hard hits. It’s very stable and planted over anything. I’m really looking forward to riding it, especially with the new shock.

I do need some more time on the bike to try it in more variety and known hits. In a few months, It’ll be dialed.

THE BIKE IS LONG! Make no mistake, there are times when the length of the front of this bike is a handful but hopefully the rewards outpace them. Some tight descending switchbacks require 110% attention. Climbing tight switchbacks are less of a concern but do require honest bike handling skill to execute. I haven’t gotten a chance to ride the bike on some of our super tight Marin singletrack so I can’t say there but I expect it to work out well overall.

Why not just get a Reign?

The Reign is simply an awesome bike. I really like it. There isn’t much difference between a medium Reign and how this bike is set, except I can go backward (setup wise) easy. With this bike I really wanted to be more trail based rather than serious gravity. If I like, I can shorten the front end and reduce the travel for more pep. With the Reign, I’m definitely stuck into that line of thinking. I probably could have gone that way if a few details had lined up.