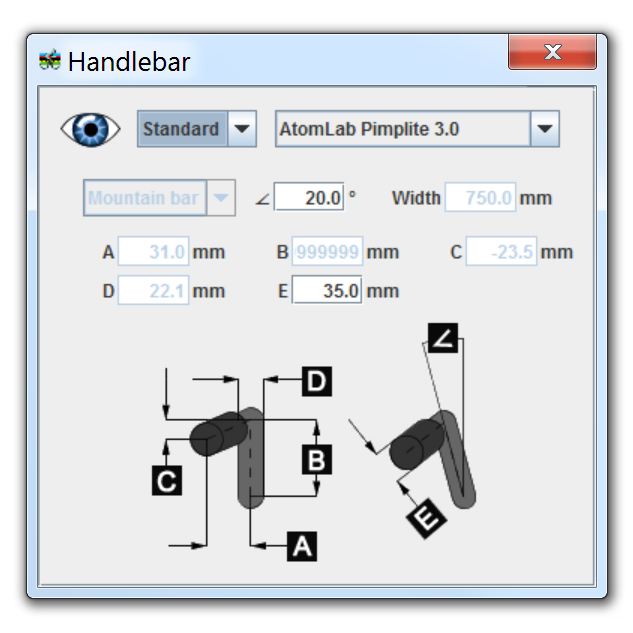 Fit is something few cyclists pay any real attention to. Dispite all of the chatter. Despite how important it is that a rider be placed well over a bike (and the bike placed well beneath them) very few riders or shops put much effort into the subject. Rarely do I have a conversation that leaves me convinced that the other person has any idea what they are talking about. More worrisome is when a print is done for a bike frame that is about to be constructed. I’ll see a lot of numbers but often, the ends of the arrows are pointing to the wrong places. Then numbers are usually off. The handlebars, part of the fit triad, are often messed up.

Mountain bike riser handlebars are a case that is is often a source of problems. They are a challenge, even for me. When we use rise bars, a slight amount of sweep roll in the bar can dramatically change where on the bike a rider is holding. The basic sweep is what is aligned with the rider (I start by aiming it at the belly button). It is important to get this right. Rolling the bar in the stem achieves this but it has to be reflected in the print. Without true bar roll values entered, it will be easy to miss the mark and end up with a frame that is the wrong size or not optimized for the goals.

This problem is currently being magnified on a design that I’m working on. I’m doing a 29″ BMX Klunker type bike. I’m a Marin guy and I’m getting older. I need a bike for not going fast. To get the bike to come together well, I’ve got some Atomlab Pimplite DJ Three bars on hand. They are 750mm wide so they just fit into a modern paradigm for trail use. They are fairly light compared to steel or titanium bars. They are also very cheap. Once entered into BikeCad, the variances I was getting were pretty wild in my prints so I dug a lot deeper.

Here is a properly dimensioned print for these rise bars:

There is a huge difference between using this handlebar and the Race Face Atlas Flat bar that I typically use.

And another of an Easton Havoc 20mm rise bar. It comes at 750mm but I extended it to 785mm for some numbers.

The problem with the handlebar entry in BikeCad is that it really doesn’t match important dimensions within the bar itself. I used my solid model to get the right numbers for the bars but they don’t really make sense describing the bar. Moving to another format will really help get results that are meaningful.

I’ve talked with Brent at BikeCad about fixing the inputs in his program for rise bars. It’s been an issue for a while but now I’m making another push. He’s been doing a lot to make his program great so I expect things to move forward. Current projects are eating up a lot of his time right now. Be patient.

The importance of setting a print up with good handlebar values entered and fit dimensions referencing the hand grip cannot be over stated.