2014. It’s time for another Sea Otter Classic. It’s always such a great weekend and so much fun. If you’ve never gone and raced then you are really missing out. Don’t just go, race! It makes a difference. You become part of the show and it’s a whole different thing. The weather looks to be stellar. Very cool. Go!

I had a bit of delay in deciding as to whether or not I would race the Enduro event this year. Of course, for a Marin trail rider like me, the enduro event is perfect to do, but it’s still a stepchild event (like Super D was) and is run before the weekend starts. USAC are simple retards. I was honestly very excited to do the enduro race but it would have required two expensive choices to be made. First, I’d have to take a day off on Friday to do the race. This isn’t so bad considering that I’d have a great day racing a cool event. Still, I’ve used a bunch of days up from work lately so I really wasn’t too thrilled to take another. The second choice was the hard one. Because of stupid choices by USAC or Sea Otter (or both), the only way to do the race (on Friday) would be to pick up my registration packet and number plate on Thursday. There is specifically no day of race paperwork possible for the enduro. I could have probably got down there if I left work a little early on Thursday but I would have had to pay for another night’s hotel stay and that’s not cheap. It really angered me that there was such a completely unrealistic view about how people who work and race have to work around the silly rules. I would have been happy to show up at 6am on race day for reg. The completely insane part of this is that the race actually starts at 1pm! WTF? This makes no sense. Regardless, by the time I decided to pony up and make it happen and went to reg, the event was sold out. A shame because in years past with the Super D race, I was able to podium each time I raced. PLEASE FIX THIS FOR NEXT YEAR! Fuk.

So, I was going to race the XC. I race CAT2 (43-44) for  XC. I’m not the fastest or fittest climber and I really don’t have much fun on course with folks that can’t ride basic trail so I’m not too motivated to change this. Sure, the CAT1 riders are more fun to ride with with regard to skill, but I really don’t want to spend the time to get unnaturally (for me) fit to be there. Still, racing Sea Otter typically makes it worth it to at least post an XC time. As the days grew closer, thinking about the start and the first 10 minutes of the race haunted me. I’m just not into it right now. Mass XC starts are unnerving to me. Bumping and crashing around before the first corner. Then, after 3/4 of a lap around Laguna Seca and a bunch of fire road hammering to stay ahead of fitter roadies to get into the single track so I wouldn’t be stuck behind the retards is just the most painful and most unpleasant thing. I’m fine with the rest of the race but that first 10 minutes is just the suck.

I finally changed my choice to race the DH. Of course, I decided this on Sunday and logged in to reg on Monday. Of course, online reg closed at midnight Sunday. So I have to reg when I arrive at the venue. For DH (Super D, Enduro) I race CAT1 (40-49). This puts me into a group of seriously hardcore dudes. Most of them were pros when they were young and they are still at it. Fast. It’s a tough class but it isn’t huge which is nice. This course does not work to my strengths at all. I SUCK at jumping. That’s what the top of the course and a couple spots at the bottom are all about and it does cost me time. Give me a gnarly, slipper, steep, root infested hell drop and I’m as happy as a clam. Not this course. I just have to show up, have fun, and do my best.

One wonderful (sarcasm) thing about my class is that we usually get run at the very end of the entire weekend. One year, after racing had been delayed and delayed, I started at around 6pm on Sunday. Everybody was gone. Just the last few of us. It get’s cold and windy and it’s just not pleasant. That’s life. Woo hoo.

This gives me time to have some fun at the event. A lot of new product is being rolled out which is always cool. Stoked to see the new XTR and hopefully a cheap and full SRAM X1 lineup.. Friday night is the Steve Peat move, Won’t Back Down which should be super cool. 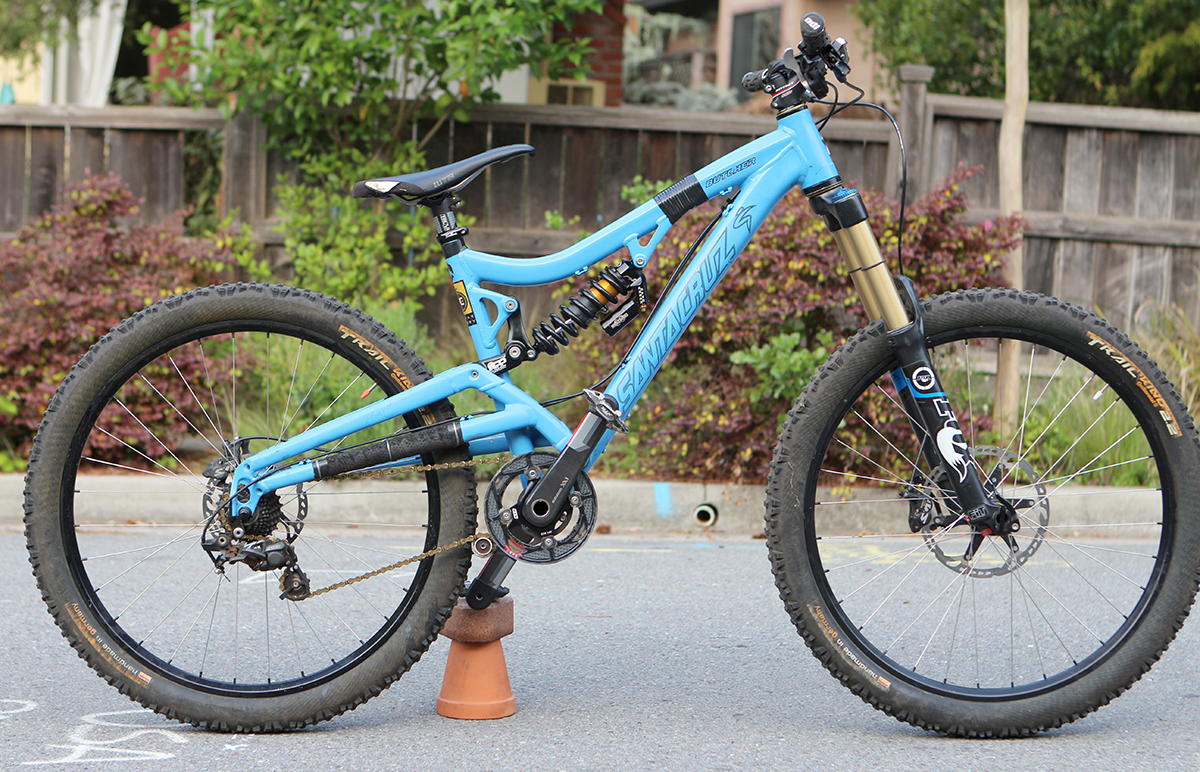 I decided not to use my Giant Glory DH bike for the race. I figured that I’d go light weight and have some fun. The Butcher is my choice. It’s not as long as I’d really like for this event. A few inches short of a front center. My Anthem 27.5″ is perfect, but I want something with more travel and more solid. Plus, 559.

I’m not excited about the chain device here. A Gamut P30S type setup but with a Race Face 38t N/W ring. I haven’t tested it in chunder so my fingers are crossed. A 11-28t cassette and a ZEE short cage should keep things tidy and geared right.

A short cockpit and 785mm handlebars will be nice for the wide open course.

Practice for the race went very well. The weather and temperature were perfect. Just slightly cool. 4 runs on Friday, 4 runs on Saturday and 3 practice runs on Sunday. No crashes but had one instance that was so insanely close. It would have been a pretty hard slam but somehow I rode out. Given feeling sick on Thursday and that I woke up on Friday morning feeling very sick, this was a successful weekend. I just willed that crap out of my system.

I ended up getting 8th in my class, CAT1 Men 40-49. I’m happy with my run. It was solid and clean but I did loose time in the jumps. Definitely a skill that I need to work on. It was just so nice not to crash in my race and pedal hard to the line.

I did change to my Shimano PD-M647 DX clipless pedals before going to the race. This was a good choice over the trail pedals. I would have preferred a slightly higher bar. A 3/4″ rise would have helped.

Mechanically, the bike ran perfect with absolutely zero issue and it felt great. 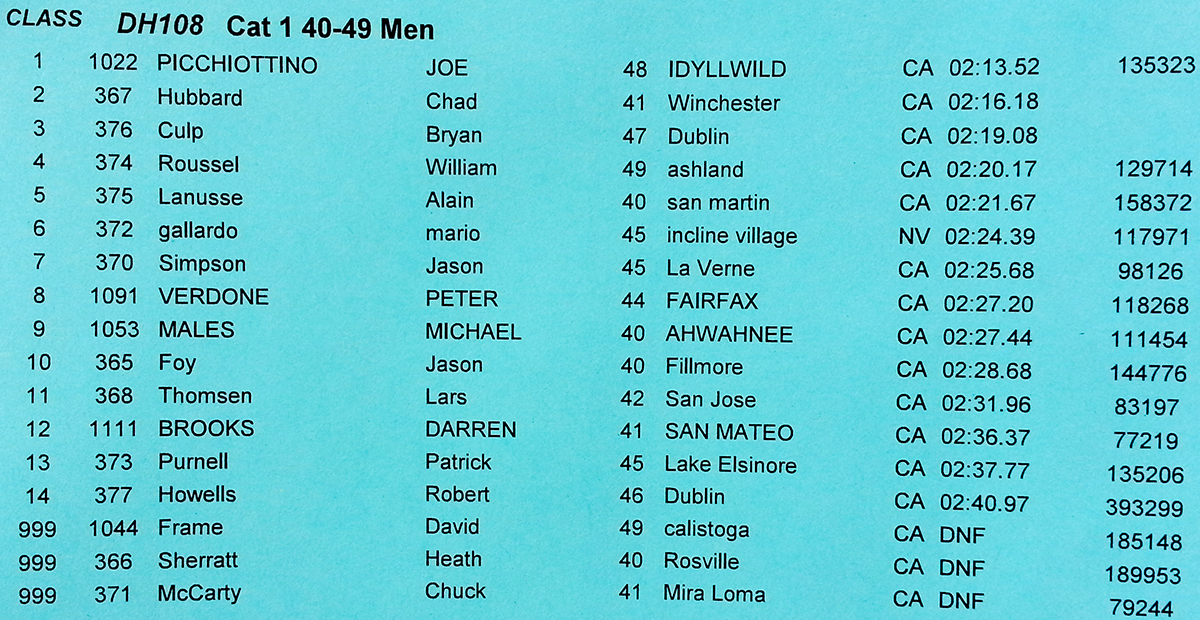