This morning I was shocked. The day started like any other. It’s Friday and I’m going to go over to Hardly Strictly Bluegrass after work. Everything according to plan…

The computer is fired up after arriving at work. I sit down. I check mail. Huh? An email in my inbox from Jamie Medeiros at Firefly Bicycles. In it, a link to photos of his new Firefly adventure bike. It had dropouts on it that I had designed for them earlier this year. I pitched them hard on the design. I believed in the leap things needed to take, but I figured it wasn’t going to happen. I thought the project had died before it went into production but suddenly, they were there. Wow. What an amazing shock. 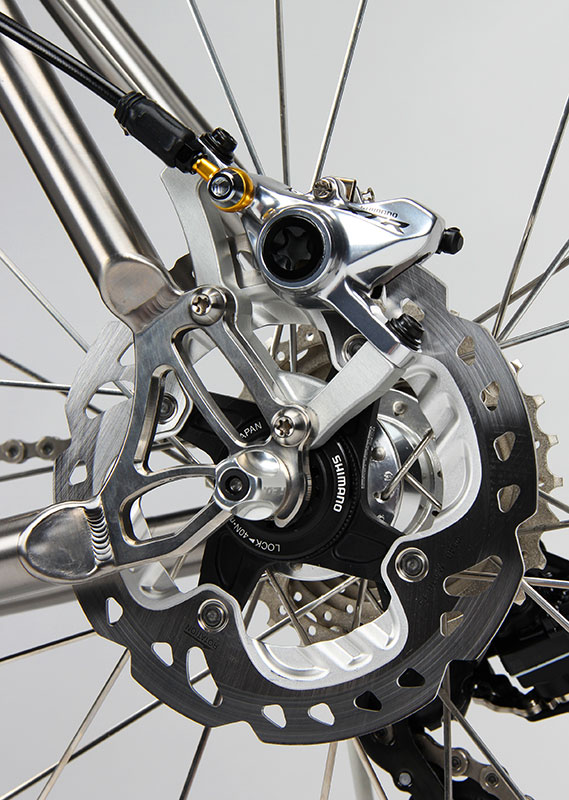 They look fucking amazing. They will also be shown this weekend at the New England Builder’s Ball.

Disc dropouts for road/cross are extremely difficult parts to design. They need to match the scope and scale of the light bike which is far more svelte than the fat mountain bikes where disc dropouts are most common. The parts need to keep the bike looking like the delicate and sexy machine it is but still mount a caliper well.

There are two main approaches to mounting a disc caliper to the bike. Along the chainstay or along the seatstay. Chainstay mounts have many huge issue, especially with the short chainstays found on road bikes. Mainly, they produce disturbing heel clearance issues. They are also difficult to make light on metal bikes due to all the extra material needed to locate correctly. With a seatstay configuration, hanging the caliper off the back of the dropout, the look is clumsy and ruin the seat stay approach. 140mm rotors are most common for road while the standards were established around 160mm rotors. This means that often, mounts projected radially outward need adapters that bring the caliper inward. Quite a mess. Still, at the end of the day, the system must be light as possible. Ah, performance!

Building on many years of designing bicycle frame parts, many fine details are incorporated into the design of these peices that can go overlooked. The structure is solid and stiff with little room for failure and makes the bike feel great. Ramps and chamfers serve to guide the wheel straight and deliberately into place for fast wheel swaps in cyclocross racing situations. This is key when the rotor can cause more of a jam than anything else. The large ‘offset’ axle from the chainstay help to reduce chain slap and increase front derailleur clearance above the stay. The derailleur hanger is strong yet minimized and smoothed for less muck and snag build up. Truly, the design has been pushed for elegance, performance, and ease for the mechanic. A summation of good bicycle design. 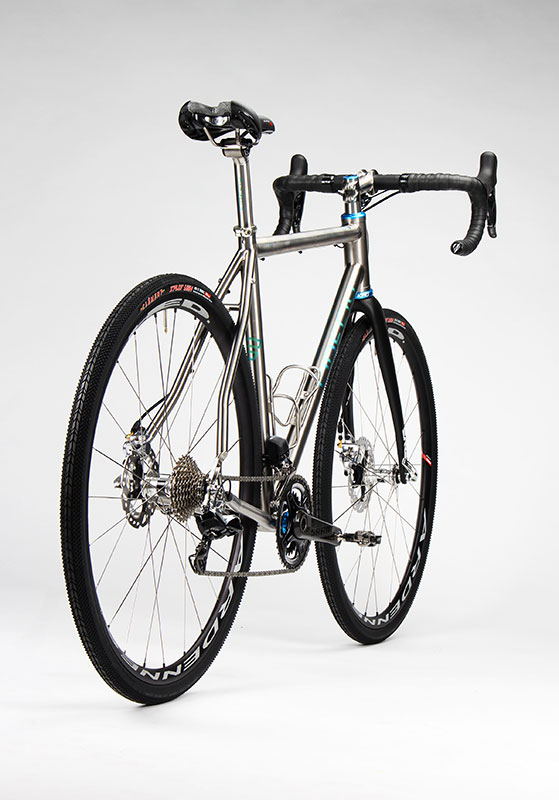 The problems with the road disc configuration were solved here by going to a proprietary bolt pattern and adapter piece. This allowed for the dropout to come together without all the problems commonly seen with disks on skinny bikes. The shape of the dropout flows with the frame. Delicate curves in the adapter soften it’s appearance while adding clearance for a wide range of frame sizes. The adapter is designed specifically for 140mm rotors but an additional adapter can be used for 160mm rotors although this would be a very rare and special occurrence (big and tall). The dropouts can still be used even when allowing for rim brake use with little loss in aesthetics. That makes for nice options.

(Anodized parts will be in place later today) 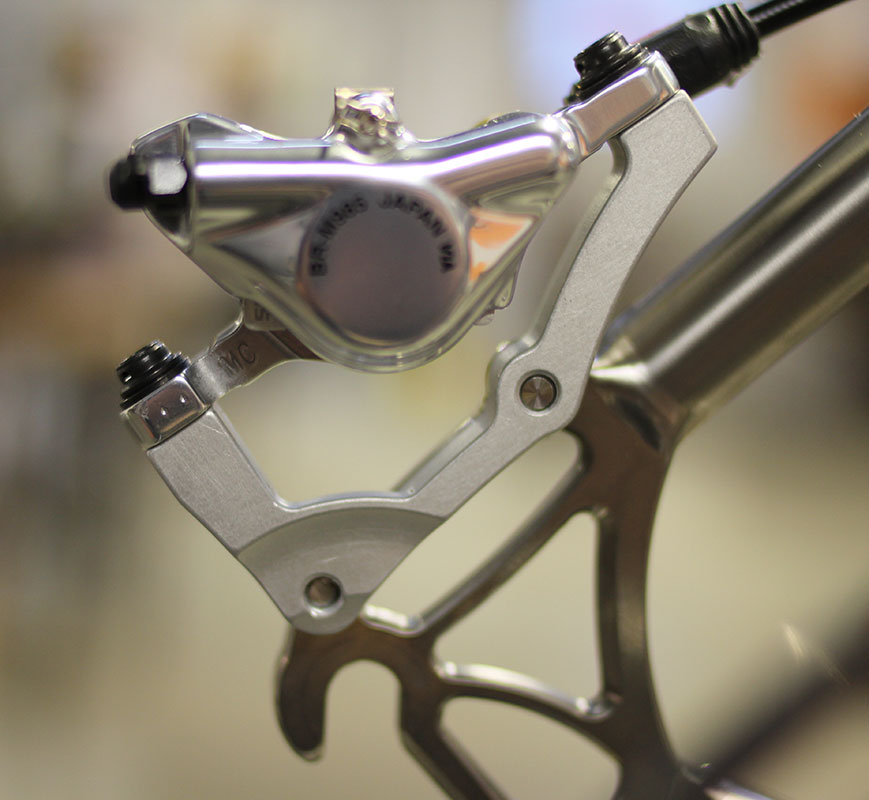 The design sets the bike apart from most of what is on the market and is superior in many ways. Obviously, I think it’s time for a new bike for myself. These are too hard to pass up. 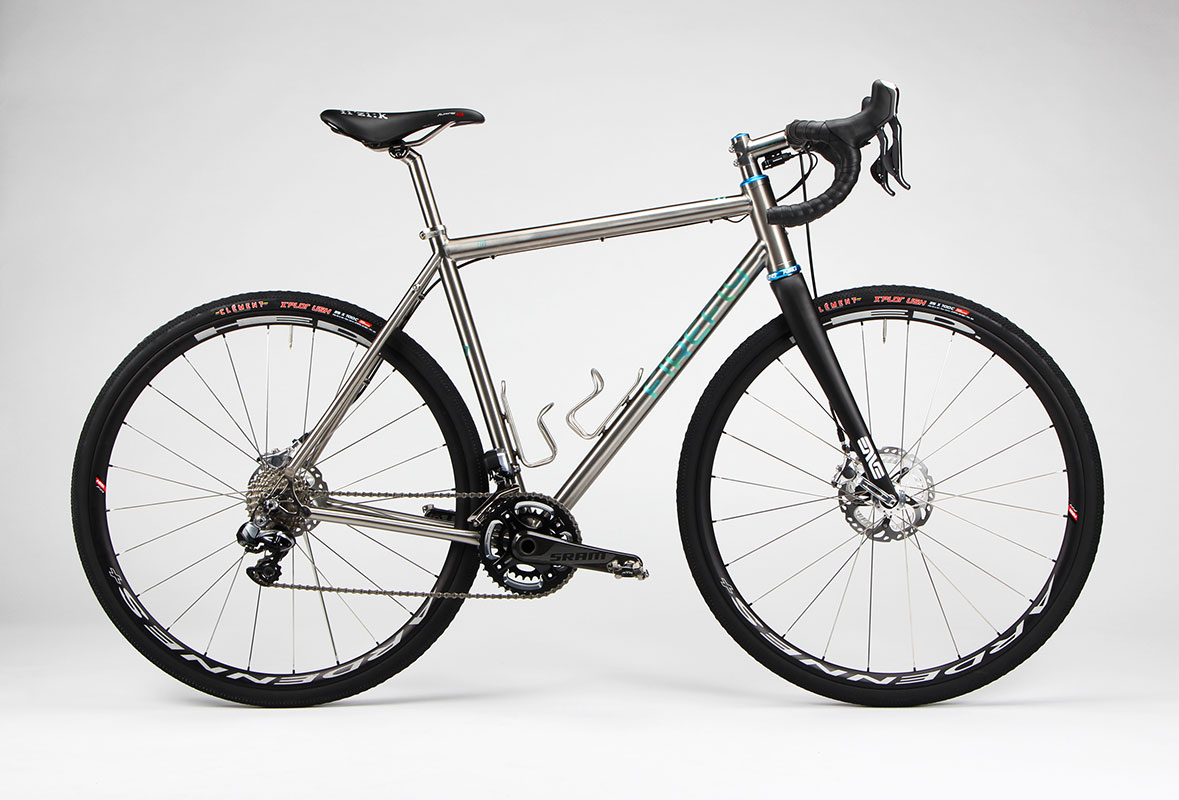