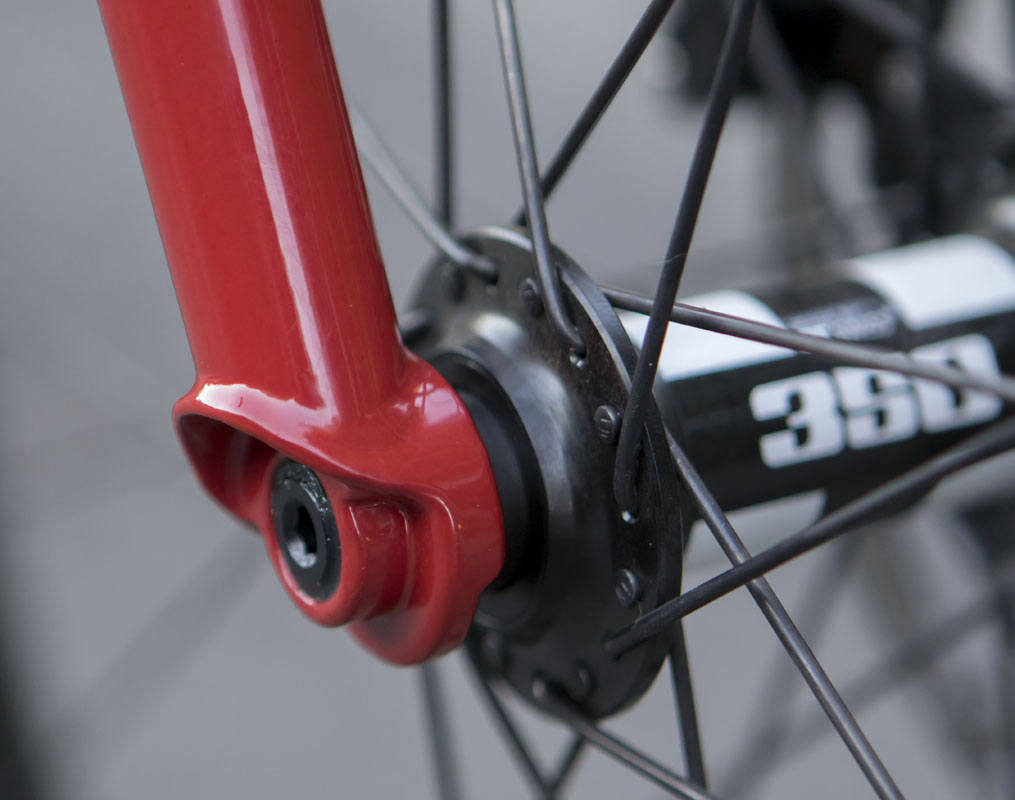 The Red Baron is a hell of a bike. Even without a front brake it is a far more capable beast than I initially figured. It goes so fast and in control that it’s tempting to go too fast. Faster than I can steer around the next tree. No sudden stops will be made without a front brake. Pure terror, like I’ve said.

Now I get to start playing with the concept. The next step, of course, is to try the bike with a front brake. That meant making a new fork for it and inventing a new brake mount standard on the way. 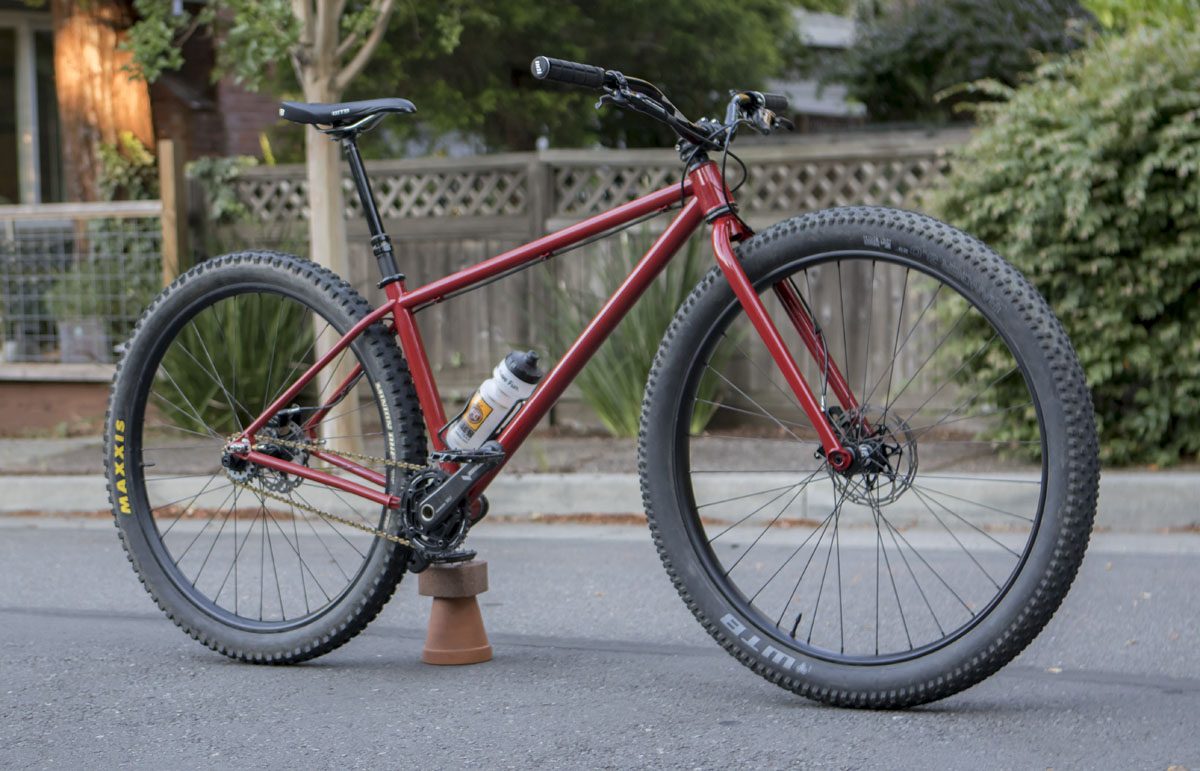 The bike was riding a little low and it turned out that using a 2.8-3.0″ tire gave the front end a bit more cushion and trail feel than smaller tires helped the lowness issue a bit. I also added 6mm to the length of the fork. Nothing that would make it look funny but a slight lift. It all worked out well. I’m hoping that some 2.8″ tires become available to try soon. 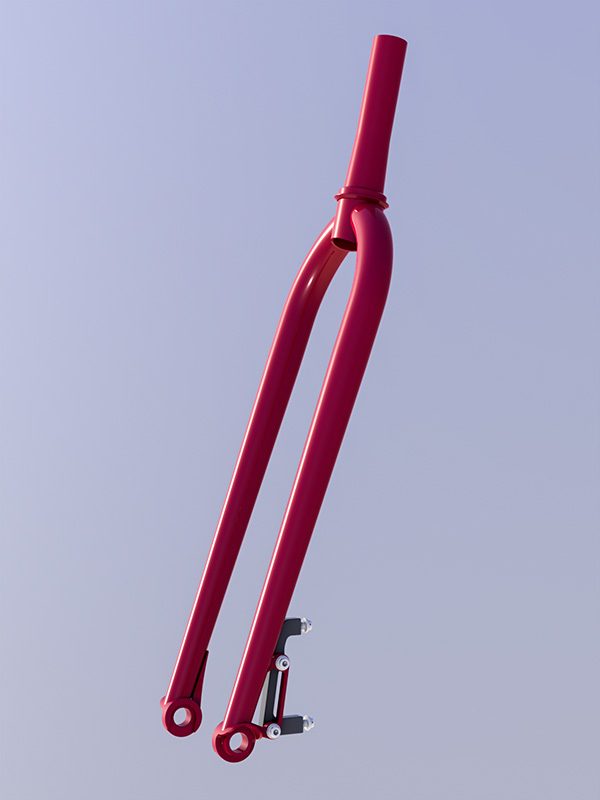 I loved doing the original fork for the Baron, the BMX fork. I felt it was a great design goal and it was met. Freed up from the BMX derived design (not possible to mount a disc tab), I could do a fully ‘modern’ fork. I also played a few tricks with how the blade met the dropout to get the two parts to blend well. I think it worked out well. Often, the large through axle dropouts can look out of place at the end of a narrow fork tube. Like the last fork, the fork blade is True Temper 1125FB-NM29. It seems to be a nice enough blade although it could be better with a little more taper to a smaller diameter at the dropout. I’d like more flex. 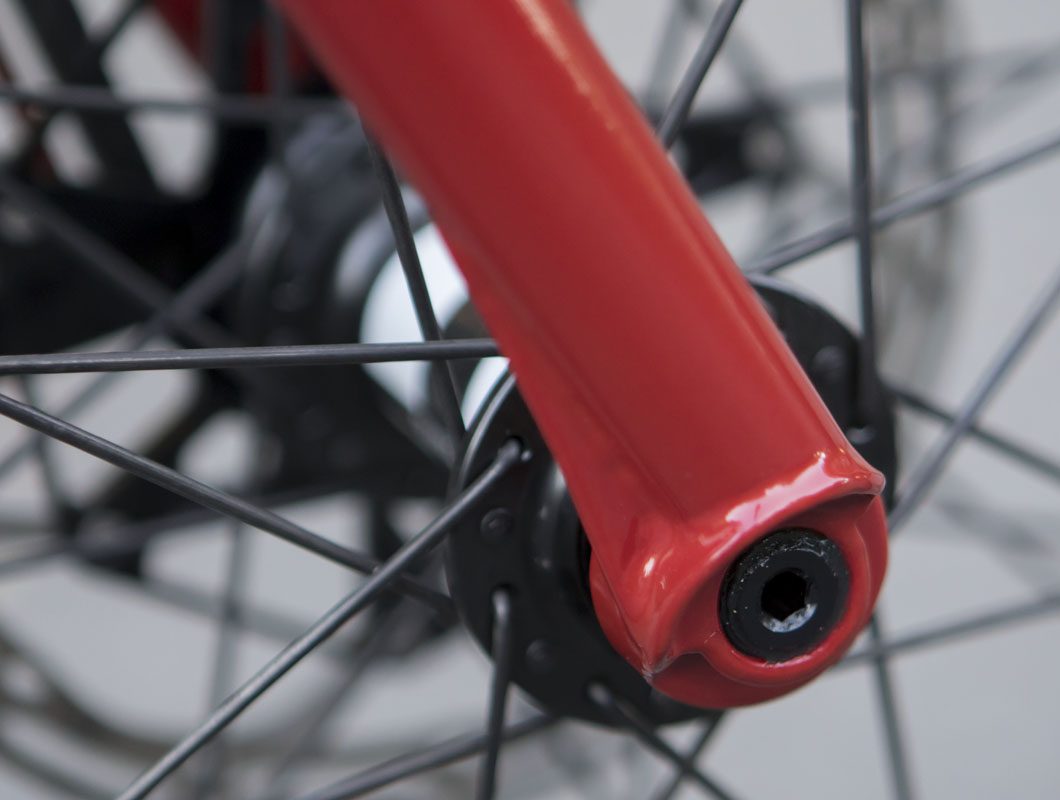 The gusset detail on the drive side of the fork is a subtle detail that really helps the fork come together. It’s not much material but it changes the whole look. It’s also trick as hell. 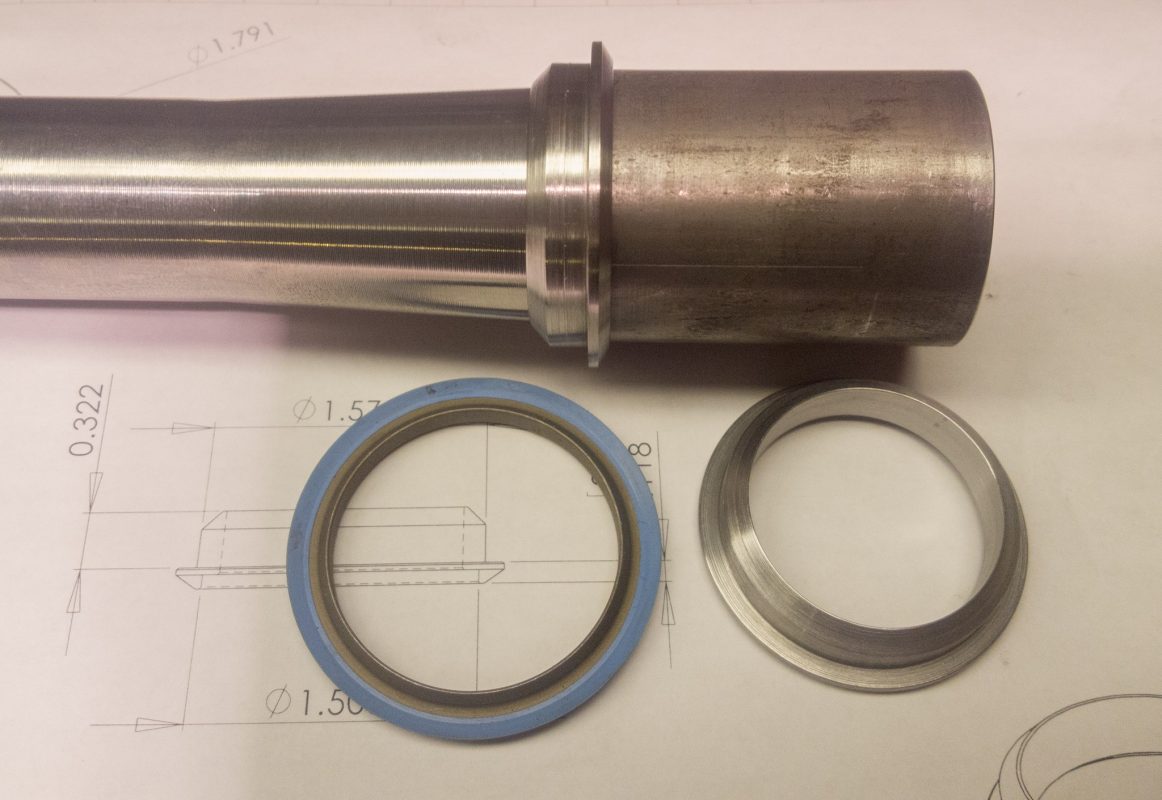 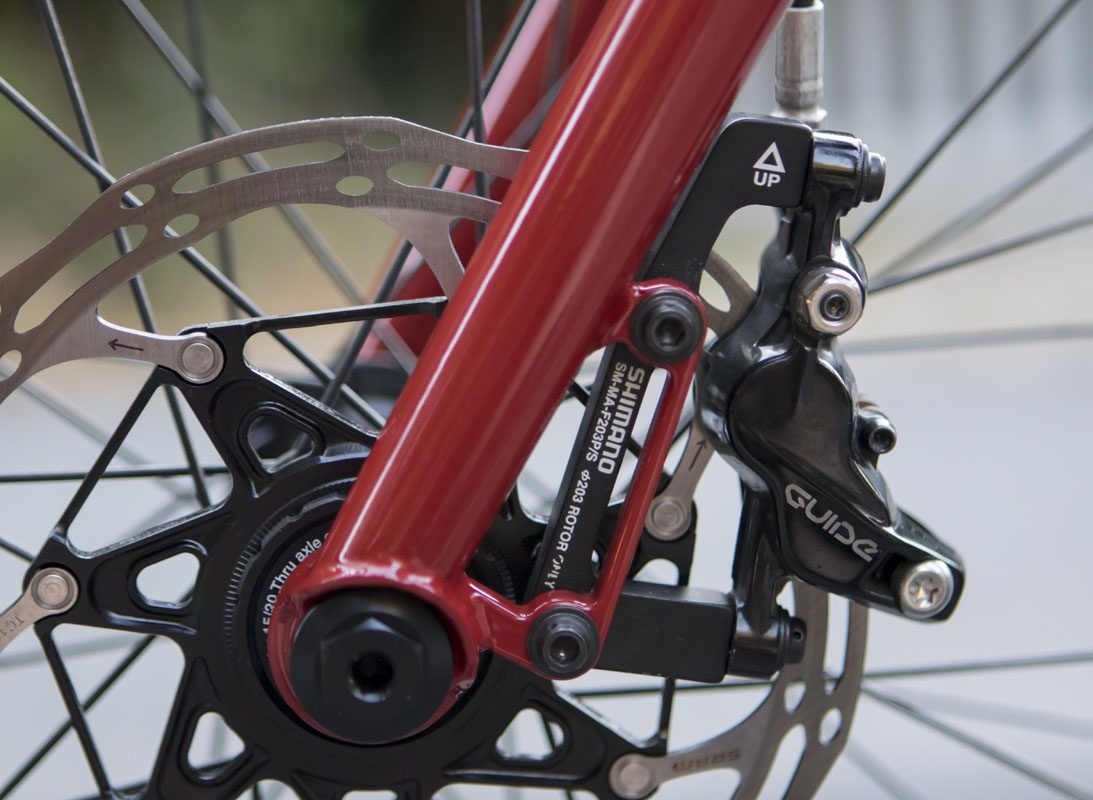 Dropouts are PMW DR2056 with a PMW SK4026 axle. Vigorous reshaping of the dropout was done.

The gearing on the Baron worked out from the start. All my fancy math and guesswork paid off. The gearing off road is a nice balance of needing to walk up the steepest hills and spinning out at speed. Same for the street. I will be testing a hybrid 5 or 6 speed drivetrain once I have some old GX11 parts after my GX12 upgrade next month. That will add another layer to the onion.

Riding street with Maxxis Hookworm 2.5″ rear and Vee Speedster 2.8″ front was cool. Next time I’ll run both front and rear Hookworms. The size of the Vee was a bit silly and didn’t really add much. The bike will probably look better with a Smaller tire up front. Another unforeseen issue is that the local bus service I use won’t fit 2.5″ tire on the racks. Adding to that, the 750mm bars barely fit in the bus tray when stowed. So, I will be choosing to not commute much on this bike. A shame. 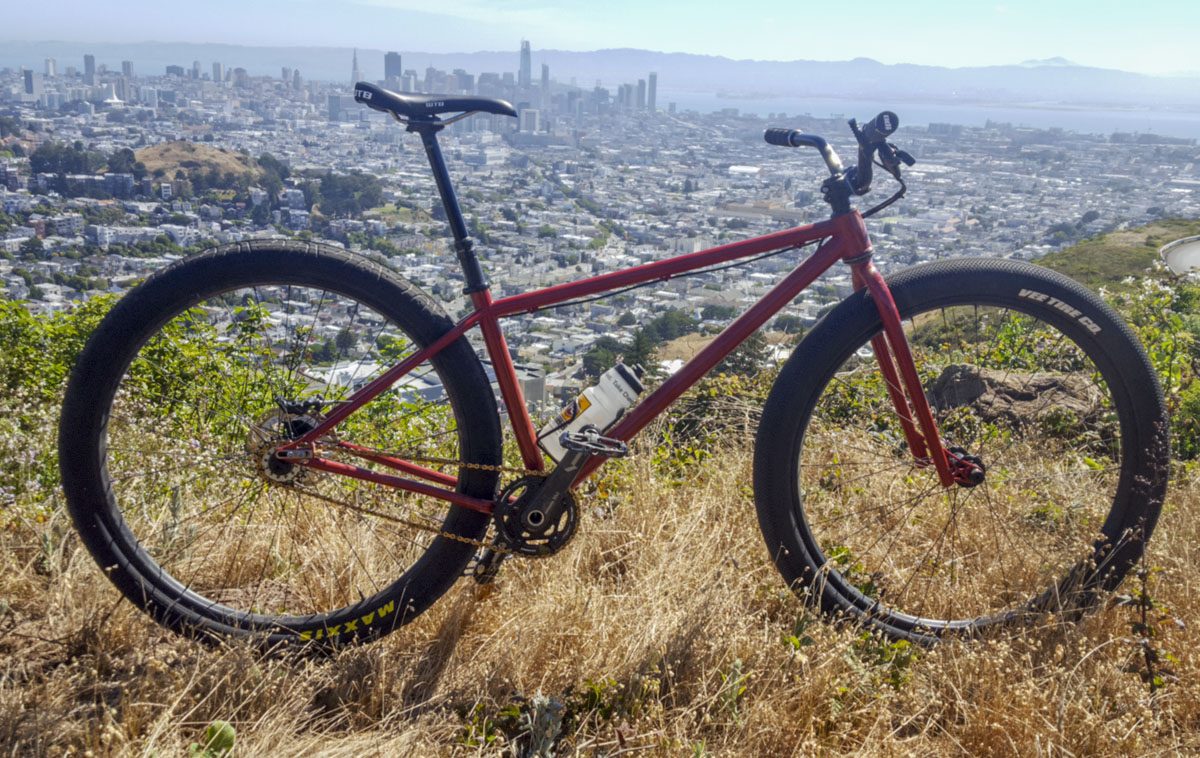 Riding the Baron with the front brake makes for a fundamental change in how the bike works offroad. Gone is the pure terror. Now, It’s just about holding on tight and staying in control. The large WTB Ranger 3.0″ L/F tire is more critical now than before as it’s the only cushion from hard hits. It’s amazing that I’m on a plus 29er tire but with a rigid fork it really does work well. I built this wheel with a WTB Scraper 40mm rim to help support the tire. I opted to not got with a 45mm to give me access to smaller tires on street. Rotors were changed to 160mm front and 140mm rear. The handlebars were raised slightly. With the addition of a left brake lever, the dropper remote was moved to the correct, left, side. With the control on the right, lot’s of confusion as it’s not usually there.

The bike is basically sorted now. At this point, it’s about learning to ride the bike better and somehow keep my feet on the pedals in the rough. The pedal height is working well now. Once I run the bike with the micro-gearing I’ll be able to determine where the development should be set.