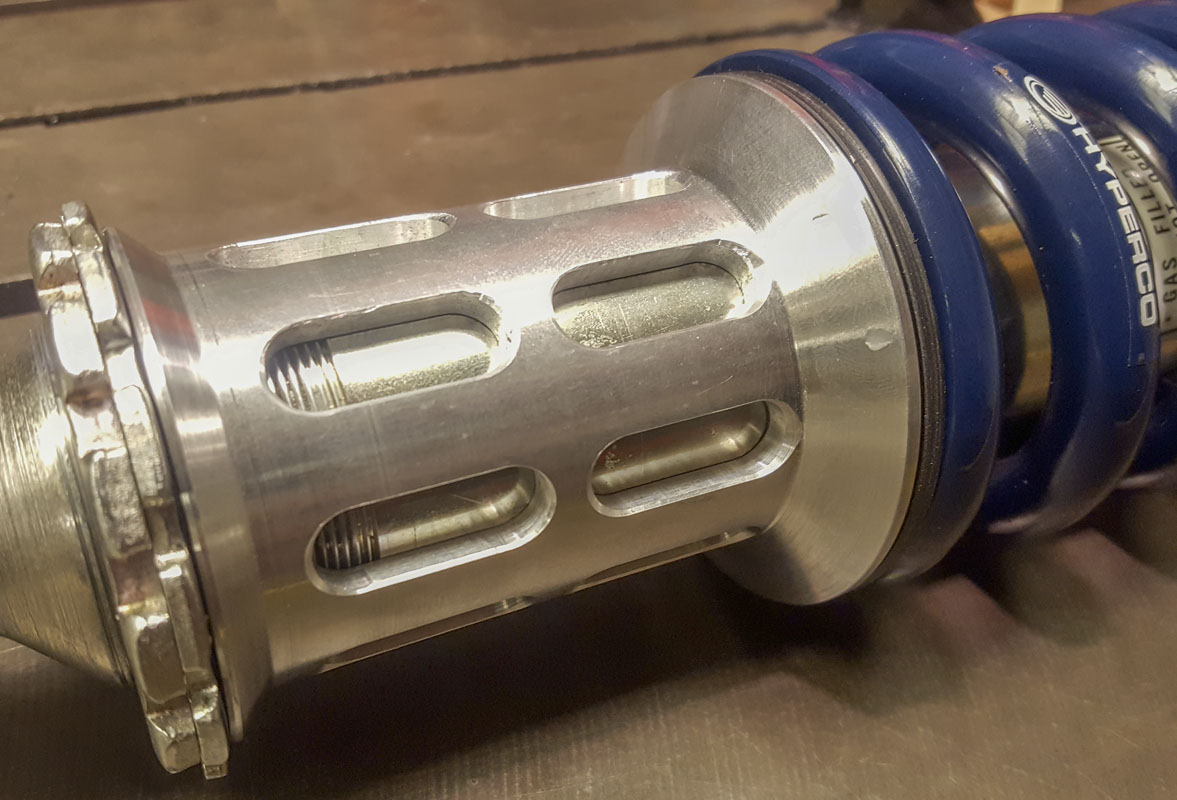 My new CTX700DE has proven to be a pretty awesome motorcycle. It’s super comfortable, easy, and fun to ride. It even takes the hard roads well thanks to the super low center of gravity. I’ve been slowly fixing the various problems with the bike and tuning what is good.

One of the most glaring problems of the bike is the rear suspension. Aside from having a pretty low end damper with a very short stoke and little diametrical clearance for a high quality shock, it is fit with a very initially soft dual rate spring that runs out of preload for all but the lightest of riders. For many riders, we are essentially riding on the bottoming bumper most of the time. It’s pretty lame and a common complaint. I’m about 210 lbs without gear and I would need 30mm of preload to get to the correct ride height and the stock adjuster allows for just 15mm. Not even close to cool.

Since the OAL of the shock is 297mm long with 40mm of stroke and the bike only the room for a 2″ id spring, not many shock options exist obviously and cheaply to put in it’s place. There’s no room for a piggyback but it could use a remote reservoir. Any ideas would be welcome. I could try a cheap shock with a 2.25″ ID spring but it’s going to be a very close call if I do.

To make this a less rushed driven tune, I purchased a used CTX700 shock on ebay to get the spring sorted while I rode the bike and thought about the damper issue. Working on the shock in the bike is a nightmare and swapping it out is a real project. I wanted to do this once. 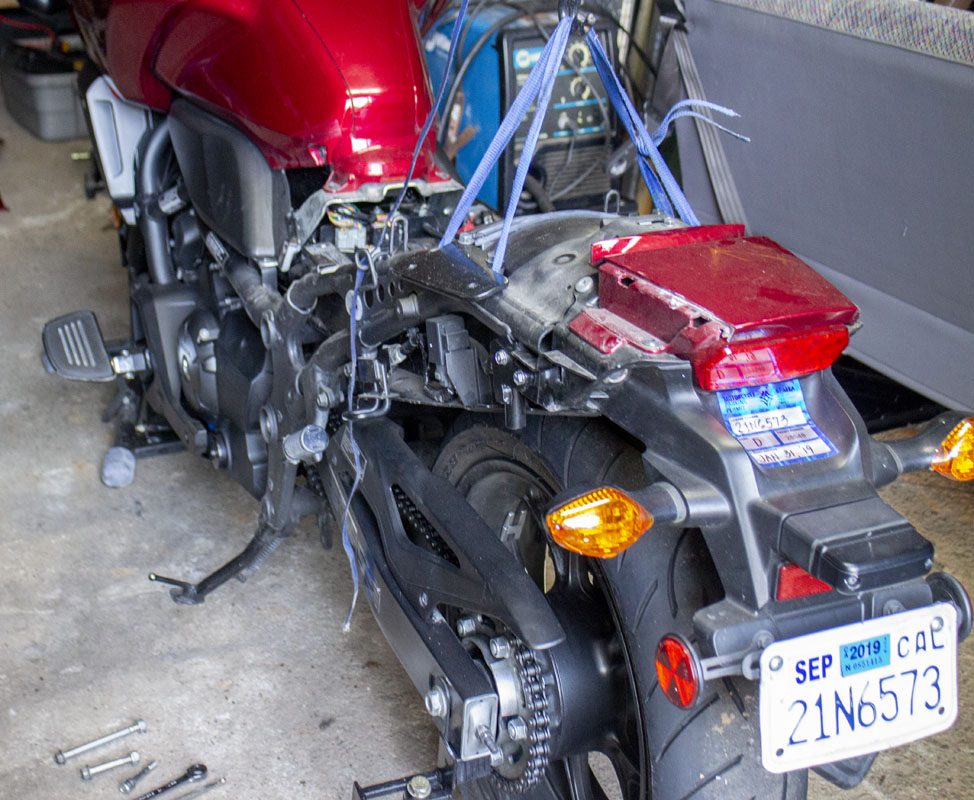 From the OEM shock, I measured the stock spring on the scale. It’s a dual rate spring but the rate changes only at the end of what would be the stroke with preload that the stock system won’t allow. It could be approximated as an 1,075 lb/in rate spring. 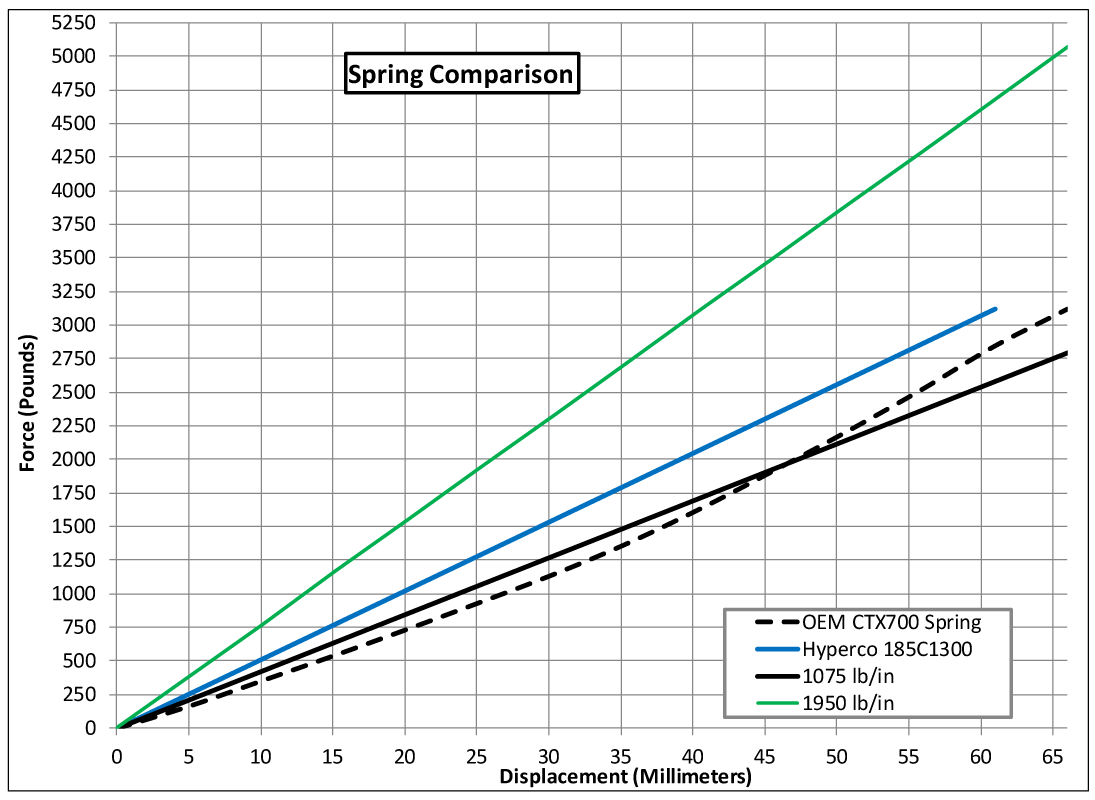 Mistakenly, I modeled around 700 lbs of equalibriam force (Where did I get that number?!), I did some math and guessing  that going to a 1300 lb/in spring would give me more of the platform I needed in the preload range I had to work with. Of course, I had made some mistakes in this load number. I had guessed at 700 pounds of force at JRA. In the end, I should have been 1150 lbs at equilibrium, granted, having a properly set spring no matter the rate is better than one totally out of range and leaving guessing. Shamefully, a little trick that I forgot to apply could have eliminated a big part of this error (more on that another time). It’s a big difference that would have shown the 1300 lb/in spring working almost exactly like the stock spring in the used region, rather than the 1075 lb/in aprroximated stock spring. I would have picked something up in the 1500-1950 lb/in range had everything been done correctly.

There is good news here…in a way.  A hard sporting test ride with the 1300 lb/in spring showed that while the spring component of the system has been improved, the rebound damping of the damper is entirely overwhelmed. A stiffer spring would be dangerous. This 1300 lb/in spring is right at the edge of being a problem. I can’t go any stiffer without addressing the damper. Currently, the damper is overheating and feeling rough when pushed hard. On highway and in traffic, the shock is working fairly good and much improved. Damping improvements would be good here but aren’t as crucial as when being sported.

The hunt for a damper begins…

A Wilbers Type 640 Road or Type 641 Competition would be nice but the price is a bit high for now.

A Penske PS-8975/8983 Series Double Adjustable shock would be the dream if they have a narrow version. 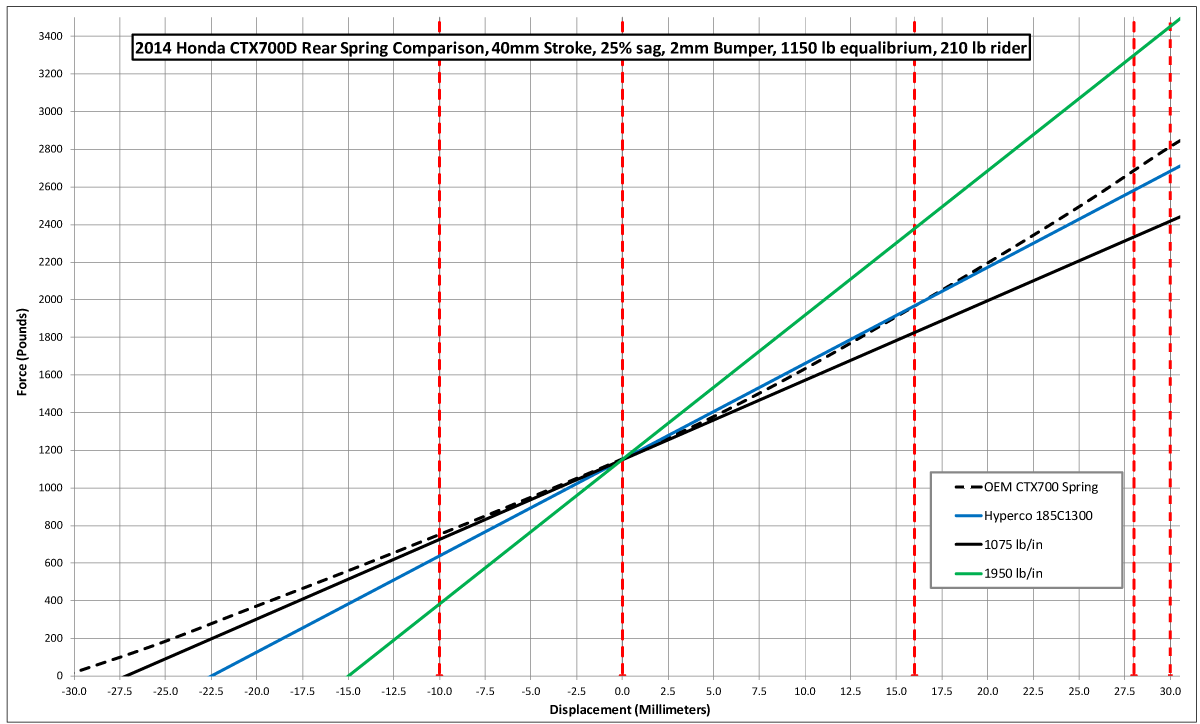 Moving forward, some adapters were made to hold a Hypercoils #185C1300, 5″ long, 2″ id, 1300# spring. I would have liked a 6″ version of this spring but those have become very rare and this spring will just make the use. This spring has about 2.5″ of travel before coil bind so I should be safe using it. 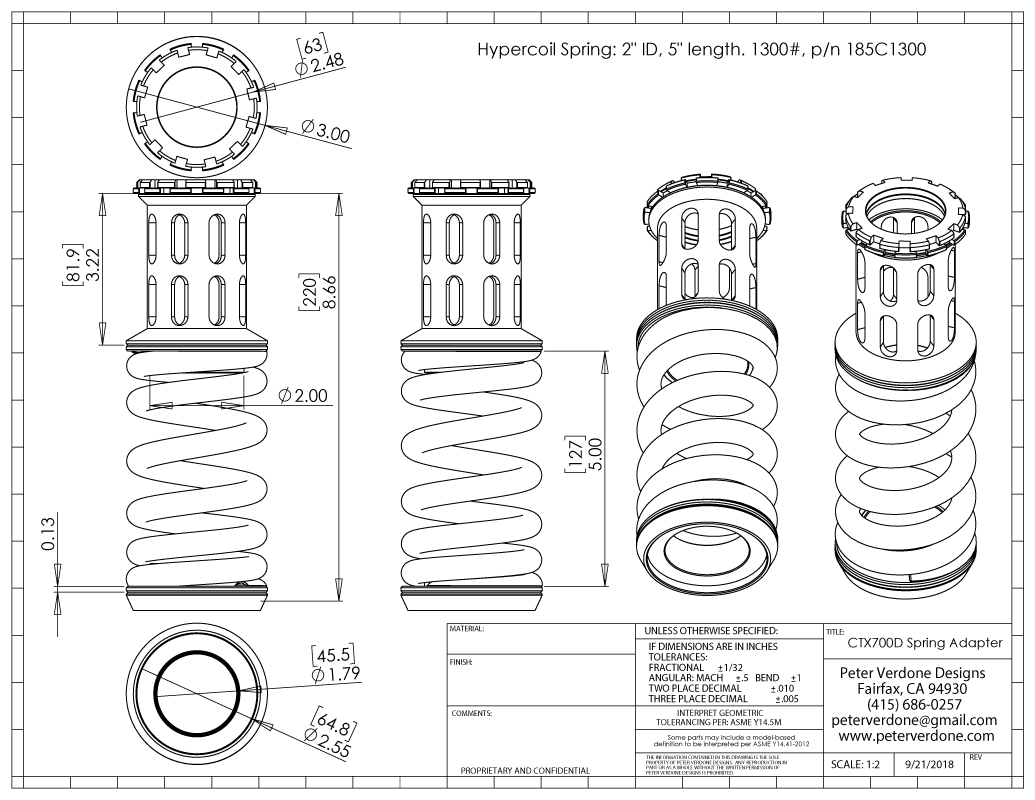 I cut some slots in the large spacer to help the damper cool by increasing surface area. With the use of all the stroke and the heavier spring, the damper will be seeing a lot of heat. Getting rid of that heat is crucial.

One of the first things needed to improve the shock was to cut down the bottoming bumper in the shock. Nice as this is, it consumes a full 1/3 of the 40mm travel in this shock. I cut the bumper down to just 2mm from 14mm. Is this dangerous? Maybe. It does leave little room for not having the correct spring and not hitting anything serious on the road. What is gained? A ton more range of quality travel on the main spring. More safety is added in general with absorption rather than bump in more of the range of wheel travel. 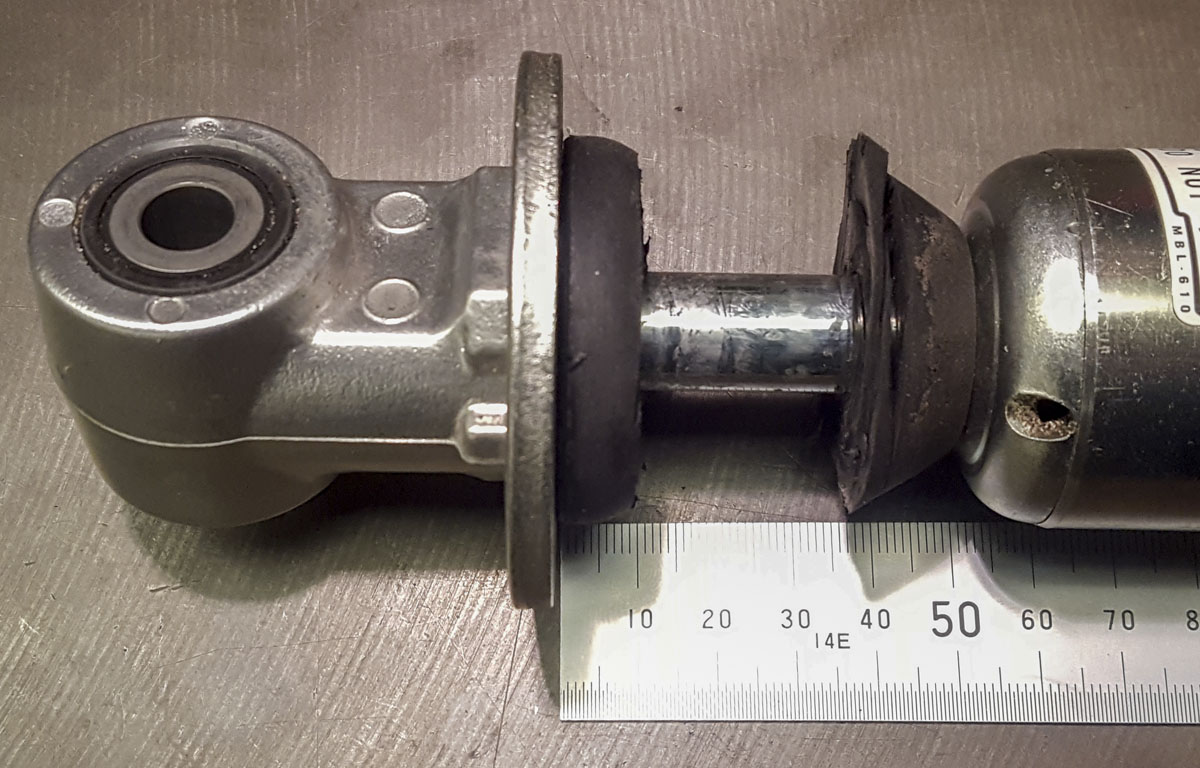 To get a bit more range of preload, I cut the lower adjustment collar down from 12mm to 9mm. This gives me 3mm more range where it might just be needed. This means that I have a full 18mm of range in preload adjustment. 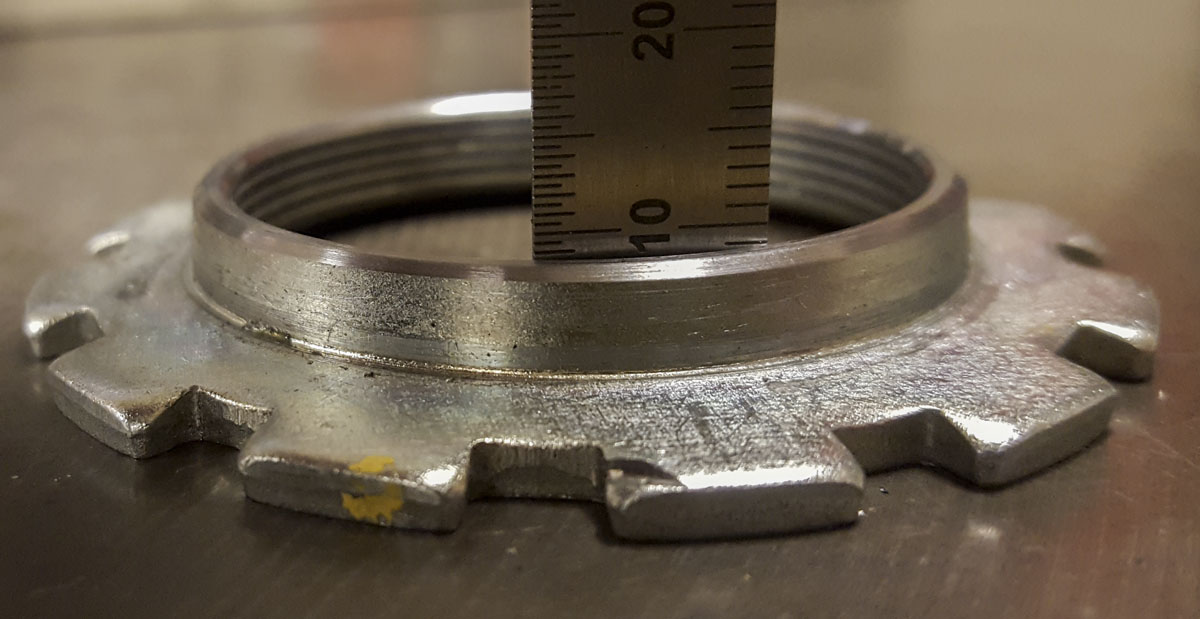 Here’s the end product. Pretty trick for a garbage damper. Is it going to be better than stock? Of course, about 1000x better.