On a recent build, I used the new SRAM GX 1×11 drivetrain. It’s cheap and seems fairly solid. It’s not super light but it gives me a chance to use a proper 1×11 configuration in a situation that it could be an asset.

I used a KMC X11L chain. I’ve been using KMC chains for years. They are really nice. This was the first of the 11 speed chains I’ve used as this was the first 11 speed bike I’ve set up. Yes, my road stuff is still 10. Bla..

I had a problem. While the chain was on the 10t cog and I were to backpedal, the chain’s outer plate would snag on the 12t cog’s teeth, this produced by the high cross of the chain at the extreme position. Running the chain on the 42t cog is much less of a problem as the chain is under much more tension. This snag was slight and subtle but it was there and enough to upset the bike when clocking the cranks at high speeds.

The day after realizing this issue, I was lucky enough to pass Ryan Condrashoff on my way to work while I was on the bike in question. Ryan one of the norther California SRAM reps. He suggested that I use a specific 1×11 chain from SRAM. I called bullshit but he assured me that they are different.

I got the SRAM chain and they are indeed different. I chose the affordable PC-X1. 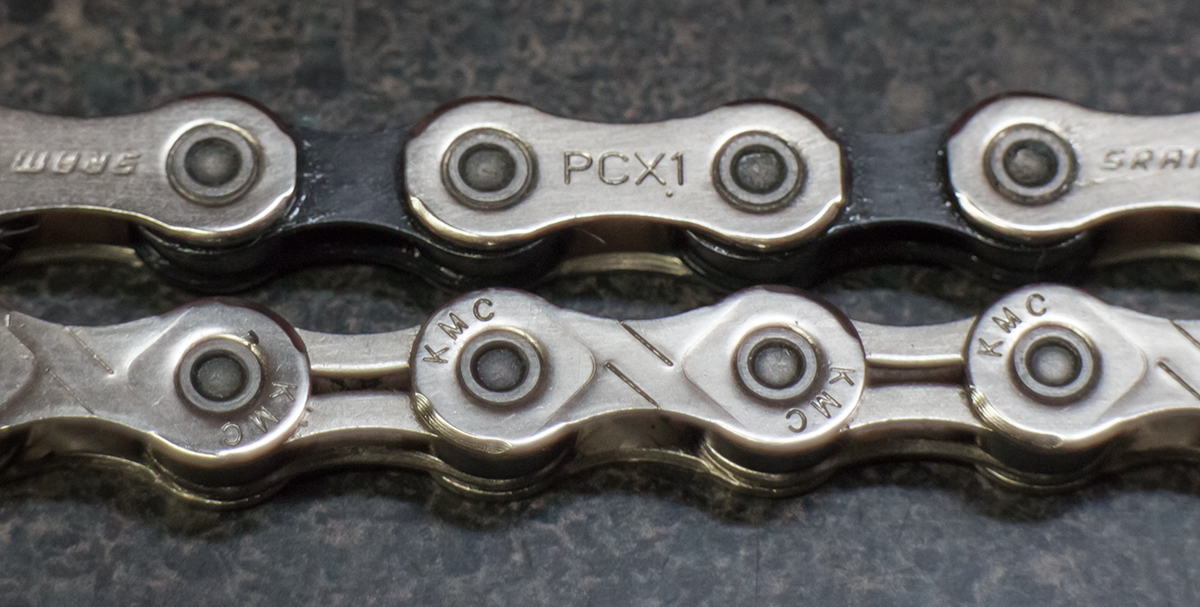 There are a few things to notice about these chains.

Since installing the SRAM chain I can say that the problem has gone away. The drivetrain is still not happy in the 10t cog but it is running clean although with very low chain tension. An evil of this beast.

Once KMC introduces a chain with symmetric and increased champhering, I will definitely be switching back. I believe that the champher type is superior to the SRAM’s cheap champher.

In the past, I used 10 speed chains on 9 speed and singlespeed systems as they worked better and were stronger than the 9 speed chains. As time went by, everything was 10 speed so I didn’t need to talk about that. At the time, though, it made inventorying spare chains easy. Today, I’m looking into using 11 speed chains on 10 speed systems. I haven’t tested yet but it should work well.