We all think we are so smart. We dream of a new bike and spend weeks getting the parts together or shopping competing models. We are convinced that we know just how the bike should be. We want to crush down every hill, win every climb, and outlast everyone on the ride. We ‘know’ the new bike will do everything well. We know every choice we make is right….and then we ride the bike. Often, it simply doesn’t live up to our dreams. Sometimes, it just sucks. It’s slow or sketchy or doesn’t ever sing. Why? Honestly, it’s because we simply don’t know what we think we know. We are what Fox News (or Team-Robot) would call, ‘an expert’. Regardless of what we do understand, we are often making changes that evolve the bike into something different than we are used to. Going from 26″ to 29″ wheels. Full suspension to a hardtail. Or we get older. Or we move to a new area. Or we begin riding with more aggressive folk. Whatever the reason or factors, a bike will need to discover itself as you discover it (and yourself). Things are messy out there. We’re talking about relationships.

(This is why I always tell people putting together a new bike to borrow or use garbage stems and seatposts until final fit is arrived after a few rides. So many people are out there stuck riding the wrong $300 stem)

I’m a victim of this myself. Every time I put a bike together this happens. Sometimes the stem is just 10mm off or needs a spacer, other times the entire drivetrain needs to be re-configured or an angleset installed…and I’ve been designing frames and parts for years and riding for longer than that. Here’s a nice example of what happened to a pair of bikes recently over time. 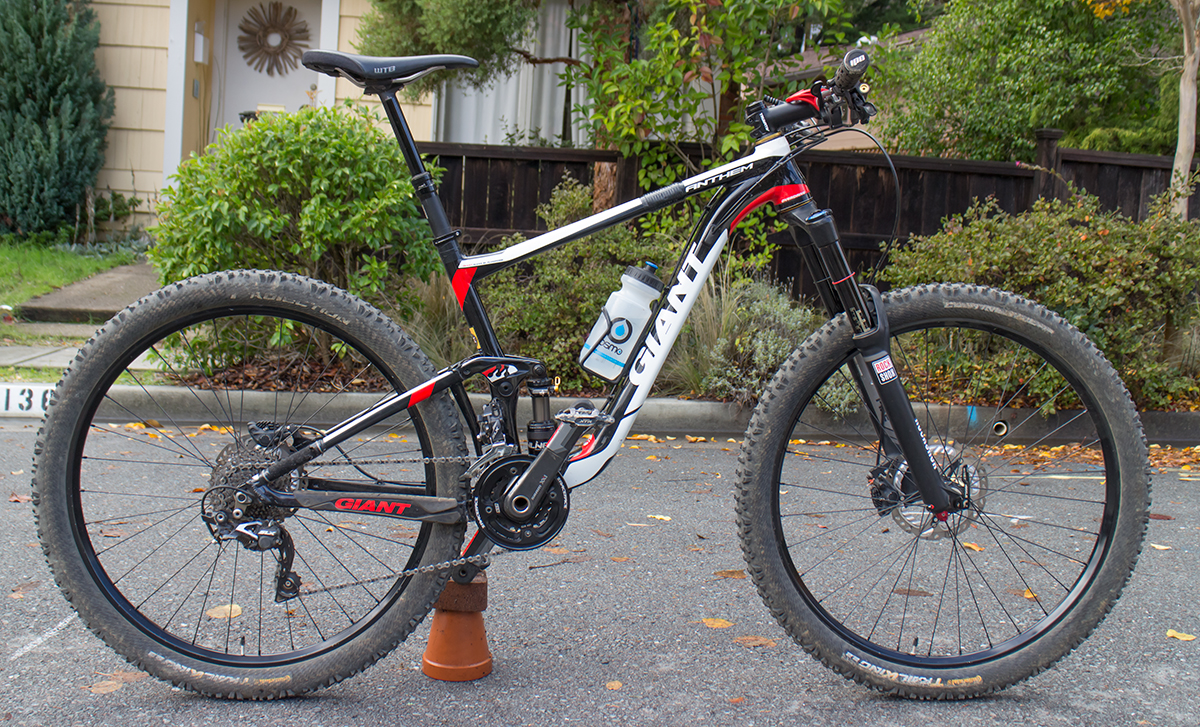 I got this bike almost exactly a year ago. It began as a stock 2014 Anthem 3 (M). What is so incredible about the Giant Anthem bikes are how well they climb. It’s almost like being on a hardtail (except better). We need that in Marin. But then we need to race downhill after the climb. 100mm of rear travel is fine for control and is very fun to ride. The front began with the fork being reset from 100mm to 120mm, with an angleset. The bike was nice but needed work. It was a little low. The tires sucked. The rear shock worked horribly, totally under damped in compression. The thing was that it was still such an amazing bike. This bike has changed a bit since it came to me. I’ve refined it into an incredible Marin shred bike.

About 6 months after going down the road of developing this bike, Giant announced the introduction of the 2015 Anthem SX, a more mild version of what I was working on but definately a step in the right direction. Still, anyone with a 2014 Anthem 27.5″ can extend the fork to 120mm from 100mm internally. Adding the dropper post is a requirement and while the Giant post is decent, so many nice options exist on the market, paying extra to get it might not be the wisest choice. The SX is a good place for folks to start if they are looking for easy. The two frames are exactly the same.

I probably could have gone with a large frame to move the front wheel forward more. The large is (in stock form) about 20mm longer. The issue with the larger bike is that stand over clearance is considerably more, 38mm higher, which is considerable with this type of frame. The top tube is rather high. Something to ponder for some.

I really underestimated what I could do with the Angleset (ZS44 | EC56) in terms of getting a big fork on a little bike. There was so much more to offer than I expected. Getting the front center out to 705mm with a 150mm fork is just amazing. The 150mm fork and low slack front end created by the Pike/Angleset groupo turns what would otherwise be a barely passable descender with a 100mm fork to an attack machine that isn’t overly long like some bikes when in tight trail conditions. It’s an incredible setup. It’s so much nicer now and still has the theme of a climbing champ and downhill crusher.

I do plan on extending the fork out to 160mm. I have ridden it with 120, 130, 140 and 150mm and by far the 150 has been the best. The bike is very low and in a good way right now. I do wish that it was about 5-10mm lower at the BB. In the travel change, I don’t really want to raise the BB any but I’m siding with more front meat. Maybe run it with some more sag. That’s really the only change expected.

Saint M820 brake levers have become my ‘go to’ levers. They are very high quality with a noticeable difference in feel from XT. Both XTR and Saint share completely machined resoviors and other features which seams to really matter. Not that XTs are bad in any way, it’s just that there is better. I’ve always loved servo-wave systems even boing back to the v-brake days. The hydraulic versions are superior to anything ever. Another major factor in choosing Saint levers over others is the range of the reverse throw. This is very nice in clumsy situations or in crashes.

The brake setup with Saint levers, RT99-FREEZA rotors, and XT calipers simply the benchmark for superb braking and what I measure everything against. The Saint levers are to die for and, yes, there is a difference.

It has to be said that the CCDB-IL is utterly transformative in the rear of the bike. It really is an incredible shock. It’s my third twin tube shock, so I’m used to how easily they are tuned. I would have loved a piggy back shock for the bike but nothing else was available in this size. It is so tune-able, smooth, and gives the feel of an added inch of travel. Set well, the bike is efficient and smooth when climbing but takes hard hits like a much longer system. The climb switch is almost never used on this bike as the Anthem is already incredible going up a hill. So good. 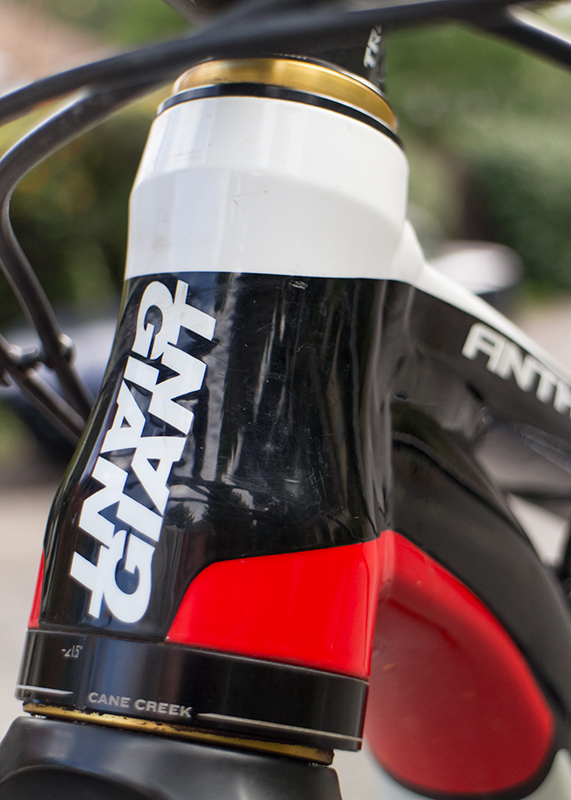 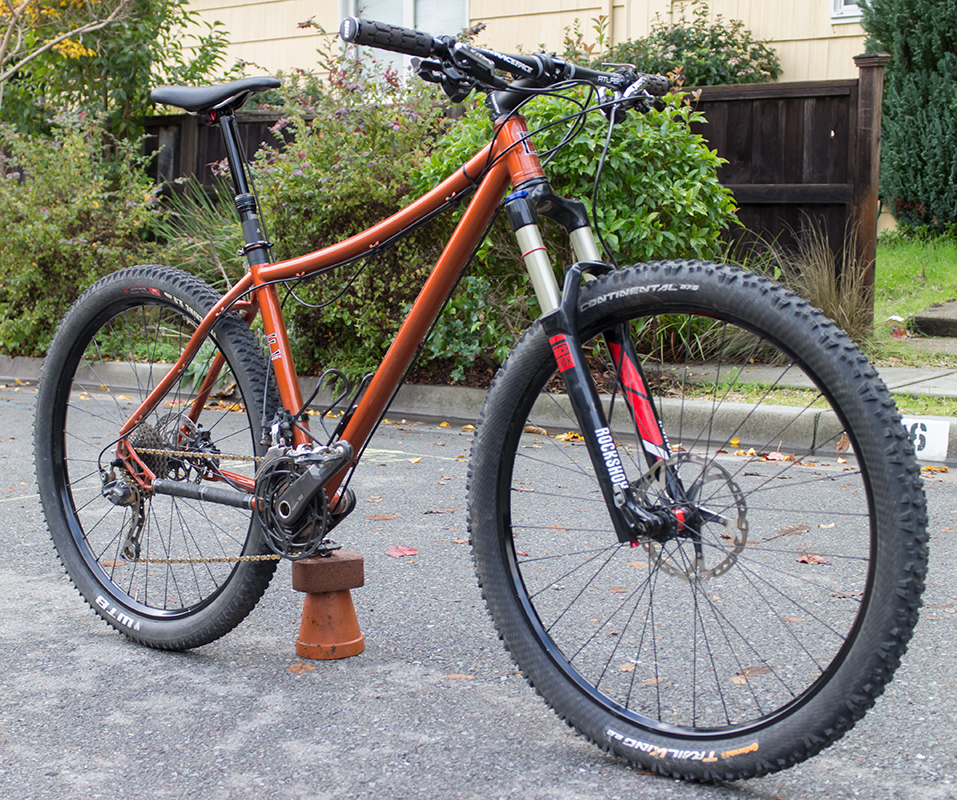 This bike was a jumble of issues. Obviously, this was constructed with geometry to my specification (ugh). I had planned it to be an entirely different kind of bike (see there?) but I was so off base it was crazy. The main issue was that the cockpit was just too far forward causing issue when seated. It was an ok bike but the frame ended up collecting dust once some parts were donated to the Anthem. Over time, I had some spare parts and did some work on figuring it out.

* Deore calipers with XT levers. A perfectly workable system
* A cheap Specialized Comand Post dropper seatpost. Not my preference but I got it so cheap and it had the offset needed for decent fit.
* RS Recon Gold fork @ 120mm. It’s what I had from the Anthem purchase. It works great on this bike
* Neat routing clamp
* XX1 Q168 cranks. The narrowest that would fit with the frame
* 90×5 stem for an aggressive fit
* 160mm rear rotor
* WTB Silverado from Devo

Now, the Engin is such a better setup than I had first thought. My mistake in the design had a lot to do with inexperience with dropper posts and how to design a frame around them. I know a lot more now and the bike is working well. Still, by using the Command post with the offset, I can get the saddle to a more livable place. The bike is very balanced even while needing a rider shift of 10-20mm rearward. This because of the long (for most 27.5″ hardtails) 695mm front center. This is a fast hardtail.

The budget Deore calipers work fine. Resin pads were replaced with metal (of course). XT levers with servo wave are for the win. Another budget part was the dropper post. I got a deal on this post ($75, yeah). I don’t like it but it functions. I would never spend real money on one of these. Scary snap action. Thanks to my recent reupholstery project, I was able to get a proper Silverado on the bike, every little bit helps on a budget build.

I narroed the cranks from where they started with the Q168s. The Engin has big stays and won’t let the Q156 that I prefer to be used. Still, much better than the donkey wide cranks most bikes have on them.