Until recently, there was just one time worth mentioning for the Endor Flow trail at Camp Tamarancho. It was, for the last 11 months,  Ronen Sarig’s 2:40 as validated via GoPro and posted on YouTube. It was the fastest validated time known for the trail. It, and he, was the target for any fast rider hitting that trail. Ronen is about half my age. While he’s a really nice guy and great to be around, he’s faster than me and that pisses me off. I’ve got a grudge. I’ve put some time in on the trail over the last year building up my speed. A 2:42.26 with pedaling and a 2:46.16 chainless has been the best I’ve been able to do. I’m proud of that. It’s pretty good for an old guy but still the result of a ton of hard work and problem solving.

Still, nobody really knew who else was fast on this trail or if there was a much faster run than Ronen’s out there. Strava is a total disaster. There’s been no clearing house for times. If there was something faster, how would we really know that they were valid times?

That folks, is why man invented racing.

With the Tamarancho Dirt Classic quickly approching, Brandon Janssen, was somehow able to convince the folks at Bike Monkey to host a chainless race down Endor with a real timing system, number plates, course tape, and the rest of the works. According to everyone, this is the first legal gravity race in Marin County since Repack. Hopefully, this will be a permanent part of the Dirt Classic as everyone had a fantastic time. Bike Monkey and the local volunteers really made this come together flawlessly.

There was a condition for adding this race as a trial event and so late in the planning process. There would be no classes other than Men and Women. There would be 120 open spots. Riders would leave in one minute intervals and there would be no set starting order. There would also be no prizes, awards, or ceremony. I can confidently say that that was fine with pretty much everyone. This was really all about settling scores, grudge matches, and bragging rights like any proper race. Also, there is now a clearing house of times that are valid for comparison for others, unlike what you see on Strava.

There were several rules laid out by folks involved with the trail ahead of the start of the race. You would start on the starting ramp. You got one, a single, push with one foot. You would have any chain or other drive system removed from your bike for the race. There was also a strong caution; que up sensibly. A rider that is known to be very slow should not gate in front of a rider who is known to be very fast.  Given that having to pass would ruin a run, this is what we did. 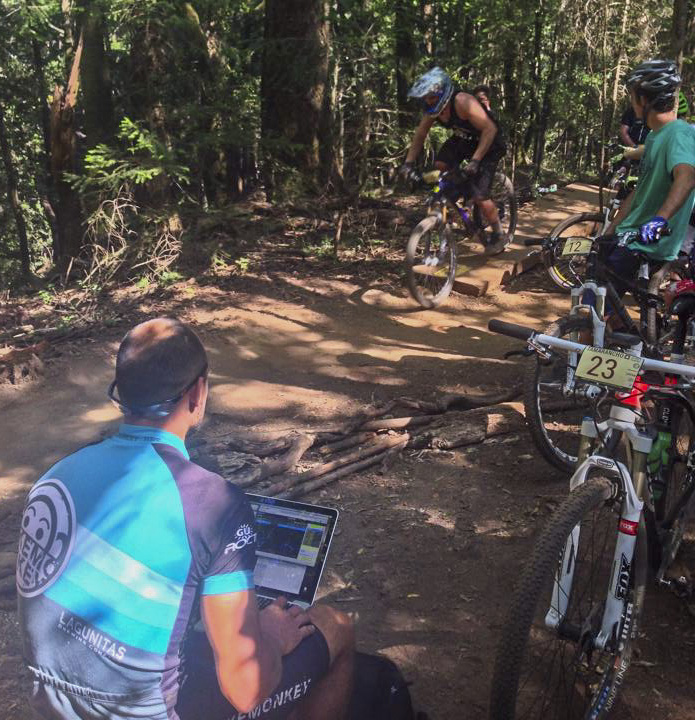 Ronen. First out of the gate. (Photo: Peter Repetti)

Thanks to Bike Monkey’s awesome timing system, rider’s time started the instant the racer lifted their foot from the ramp. This removed an amazing amount of stress at the line and increased the fun. Also, they had in place network hotspots that uploaded racer finish times every few minutes so people still waiting for runs knew the drama as it unfolded. It was really cool and pretty much flawless.

Under three minutes may not sound like much to most folks in bike racing. It would be pretty short for even a proper DH race. This is a bit different. The gate was a 8 foot ramp that didn’t give you much speed coming off of. You land on a very gentle slope with a couple of small lumps on it. There so little to work with here that you feel foolish struggling but many have already lost the race at this point as you literally have to ‘make a dollar out of fifteen cents’ to post a good time. Of course, this gives the heklers lined up for start plenty of time to kick you while you’re down. You develop just enough speed to launch a bit into the air before diving into the first big right hand berm. Then you have a nice bump into the air right into a crazy left/right ess turn. A bump. A four pack of tight bumps and a right hand berm sends you into some bouncing lofty craziness. You are now out of sight from the hecklers at the gate just as you set up for two giant rollers that you have to hit way too fast but not so fast as to case the next. Of course, you are flying down the trail right into some tight trees. This is probably the most dangerous part of the course. I don’t know how everybody in the race dodged this bullet but they did. Let’s just say that there was a lot of bark gone from the trees by the end of the day. With your rear wheel skipping like water on a hot oiled pan you descend into the ‘skills area’ By the time you reach the ‘skills’ berm, you muscles are on fire and you’ve probably already made 30 mistakes that your trying not to think about. You’re running out of breath and you have a couple of very sketchy corners to try to ride into as fast as possible like no sane person would….and you’re only fifty seconds in (at a top pace). It goes on, but with two great opportunities to blow it and  lose all your speed to end your game.

What I’m getting at here is that you can be sure of three things each time you do a fast run down this trail: 1) You will be in total agony as your muscles fatigue and run out well before the race is done. 2) All oxygen will be gone from you at the bottom leaving you gasping and coughing for breath. 3) You will have taken way to many chances are are lucky to still be in one piece.

Racing chainless is a challenge. All of your forward momentum is gold. You are pushed to make as much as you can and not toss it away frivolously. The added problem for me here is that it really isn’t my style on this trail. There are two camps of riders at Endor; the ‘flow’ riders who don’t believe that a rider should pedal at all, and the ‘peddlers’ who believe that any way of running the trail fastest is legit. I’m a peddler and it’s a very different mode. When the announcement was made that this race was going to be run chainless, I knew I was in trouble. I had to put some work in to completely change my style of riding on the trail to work with the race format. It’s such a completely frustrating process to work against your natural mode. I found, after time, that my flow runs were about four seconds slower than my pedal runs. This was not all energy lost. Now that the race is over, I can go back to my natural mode, pedal in the right places, use what I’ve learned flowing, and hopefully bring my fastest time of 2:42.26 down into the 2:30s. 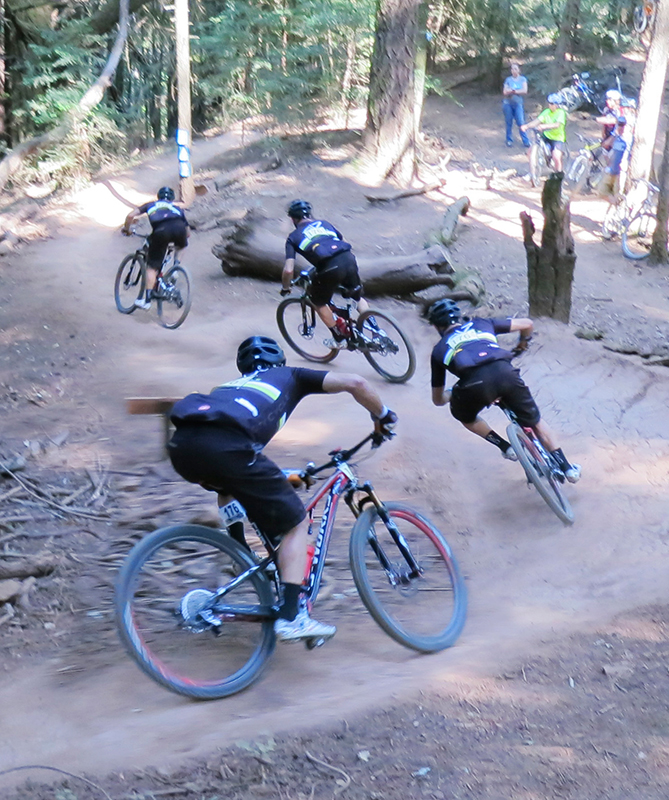 Marco Osborne won. What can you say? Another Novato boy from the tribe of Weir on his way to the world cup. He’s a new pro for Cannondale’s OverMountain squad and he is a phenom. His first place time of 2:35.913 is just insane. On a trail that turns a single second into an eternity, he broke the record by five seconds. Wow. I personally saw him ride a section that left me in awe. It was like a blur of motion.

Ronen Sarig brought his guns and laid down a super 2:41.700 for second place. He was also the first racer out of the gate screaming “YOLO!” just before taking off.

I feel especially good about getting fifth in this race as my time of 2:46.323 reflects the best I’ve been able to do in practice. That means that I didn’t screw up in any new way and that I performed the best I could. That is a good feeling in that I can’t have any regrets. ….plus…I’m the age of Marco and Ronen added together. Ha.

Graphically, it’s a lot easier to see what went down and where folks were. Obviously, Marco, Ronen, and Christian were doing something very different from the rest of the racers and that the last eight riders were as well.

Of course, this is a common shape for a sampling like this. See below. 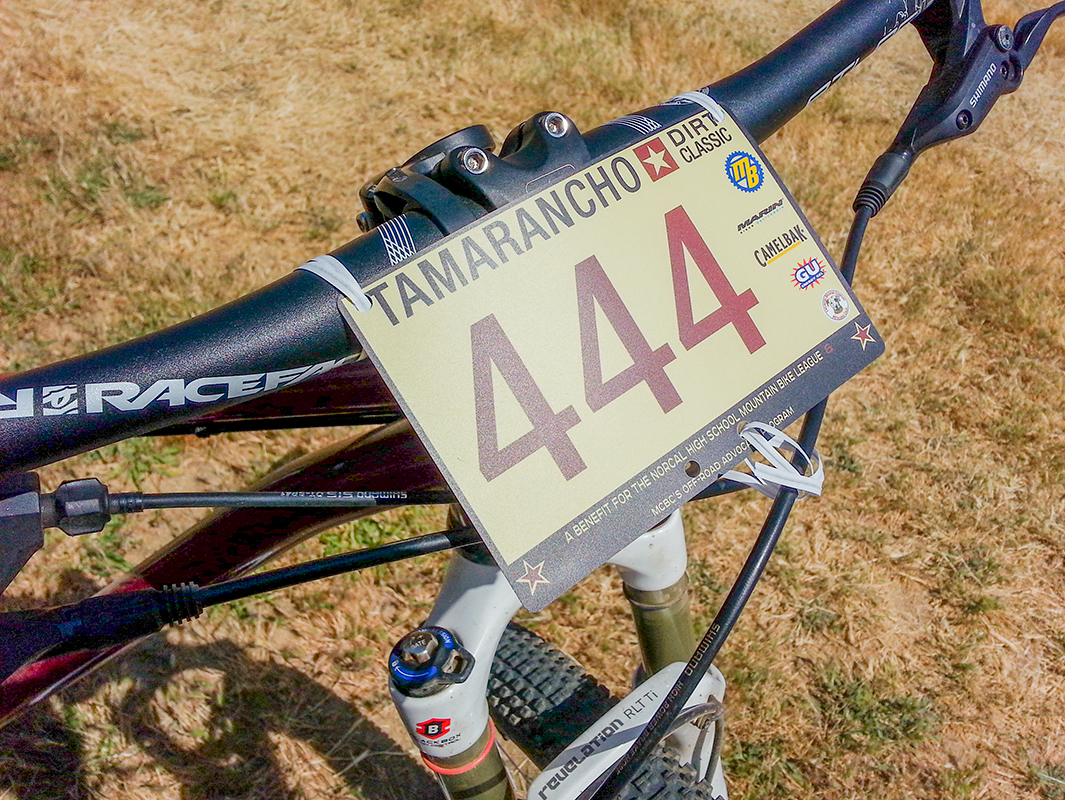 This race also provided an excellent opportunity to compare a few of the racers official time with that that Strava posts for the same run. It’s a joke. It means nothing. Here are just a few to compare.