If you hold onto some clothes long enough, they’re sure to come back into fashion. The same can be said for some bike junk. Tools mostly.

Air/nitrogen loss when removing the filler from suspension equipment is a big problem when specific internal pressures are required. The part is pumped up to the desired pressure but will reduce when a common low pressure type filler is removed. This isn’t the biggest problem with lager volume and lower pressure forks or some shocks but becomes a real problem when working with posts. For example, a KS LEV Integra pumped up to 250 psi will reduce to 200 psi when a common shock pump is removed. This lower pressure will cause real issue for the rider on the trail and will continue to until the pressure is set properly with a zero-loss chuck.

For some reason, it’s very hard to get a high quality bicycle shock pump in the US (or anywhere really). There are some versions sold, but they either aren’t two-stage units or they suck. We want two-stage units as they don’t change the pressure in the shock as the pump is removed. I love the OEM RockShocks pumps but they aren’t two-stage, which is a shame. I had purchased the Cane Creek DBair Zero-Loss Pump (SKS), and it sucks. It feels cheap and is super hard to pump. The Sunlite Air Surge Race (#43379) is good but doesn’t have an extended valve connection.

In motorsports, great tools exist for this type of work. I own a Longacre Racing Products Digital Shock Inflator (#50472). It’s a nice tool but a bit much to toss in the bag and needs an extender to work with many forks and posts. It’s great but ease of use is nice too. Notice that these types of tools have a proper two stage Schrader 556 valve connection. These are the benchmark. Maybe I need to make an extended version for work on the bicycle parts that require it. 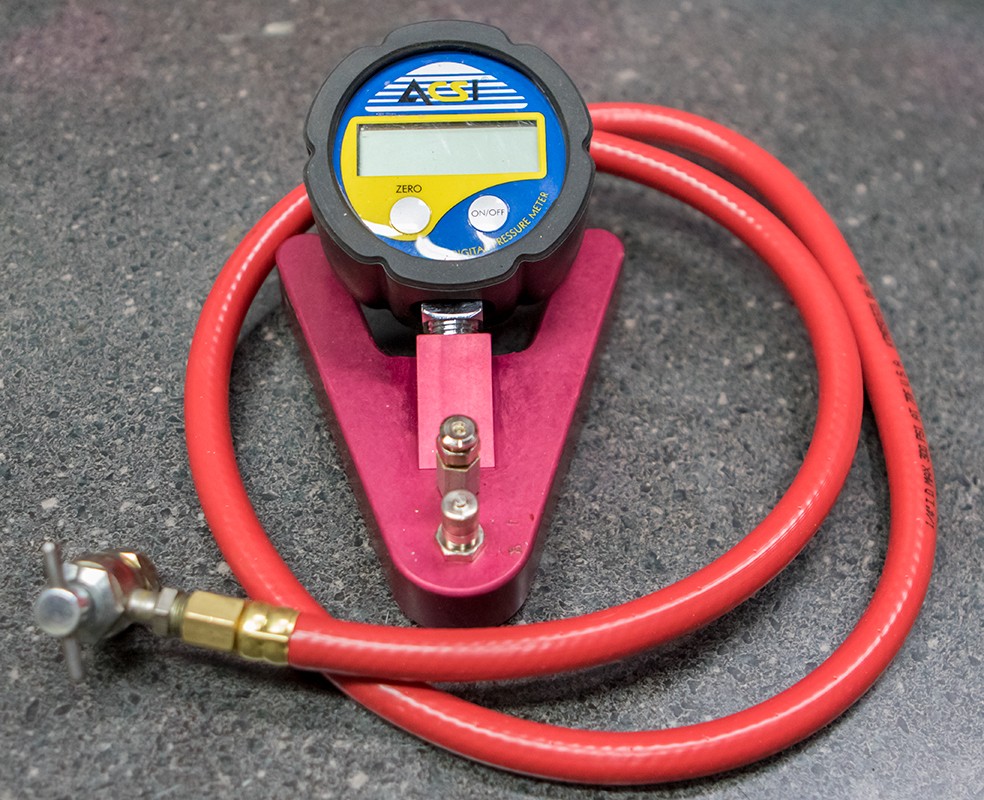 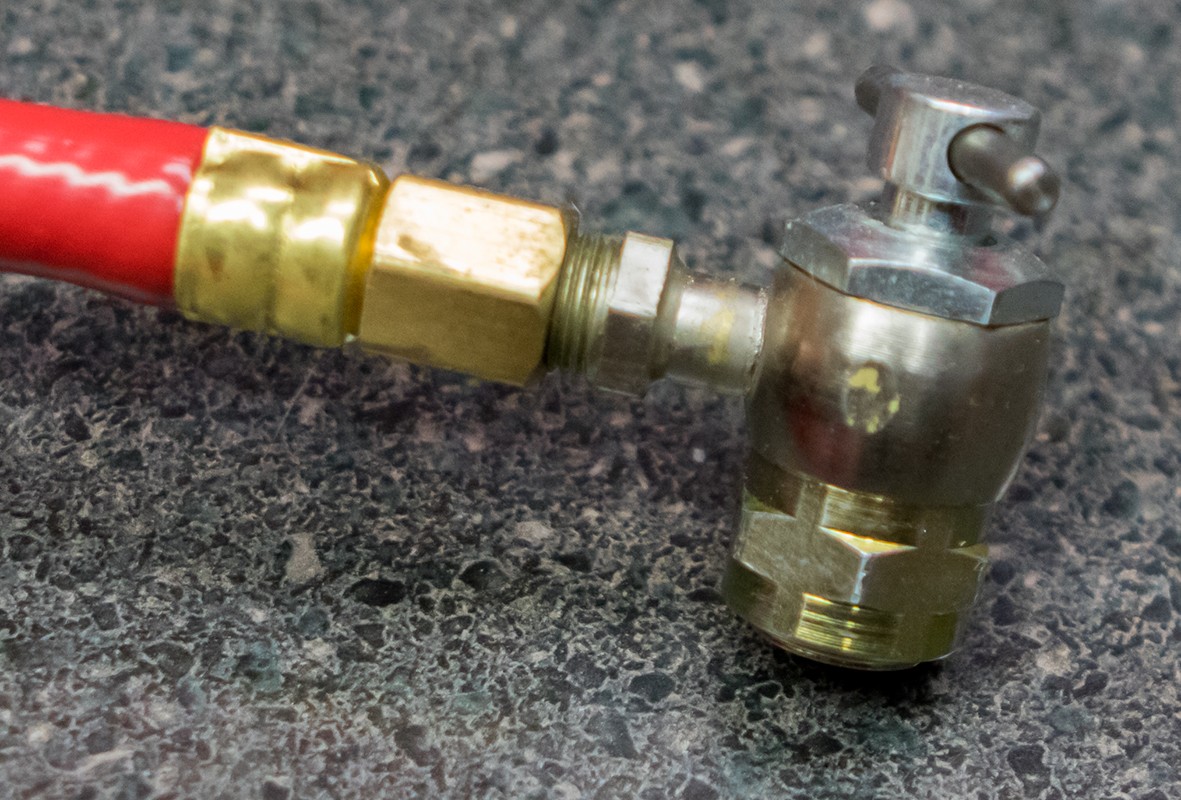 I had held onto a few very old Fox HP shock pumps since god knows when. They just lived in the bottom of a bin. They finally became useful again. It turns out that it’s a very easy modification to adapt a two-stage SKS Replacement Suspension Pump Adapter (p/n# 10127) to these by just tapping the end out to 8×0.75mm threads. These should work a lot better than most.

The Topeak Head with Hose Replacement Kit (#TRK-PSMBDX) would make a great upgrade for RockShox pumps but is not easily available at a low price. 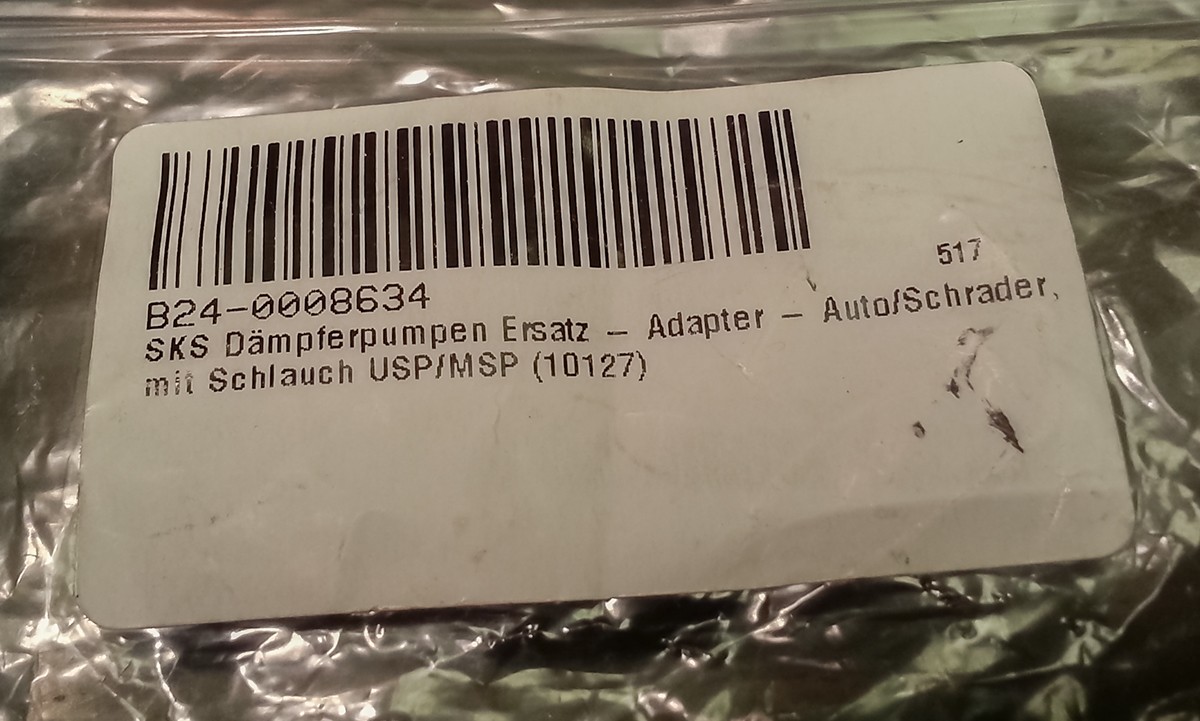 Then, of course, I fit some more useful gauges to them. Shock pumps typically come with 0-300 psi gauges affixed to them so that one pump can handle any situation. In the shop, we are looking for more precision than that can offer. I chose the Ashcroft #1005 100, 160, 200 psi gauges. as that would be most useful for forks and low pressure shocks. I could have used 2″ dials for more resolution but the big dials get a bit clumsy in tool boxes and in the pocket.