I’ve been riding mountain bikes since about 1990. Before that I had spent a year or so as a bicycle messenger and before that a skateboarder (both in Boston). Mountain bikes were pretty mangy before the 90’s. They slowly evoved until the big advancement leap started around 2010. In 1990, I was hired at Fat City Cycles and started riding offroad on high end racing bikes because I could use what was sitting around at the factory. Yo Eddy’s and Wicked’s were available to learn on, the standards of the time. Amazing. Serious bikes for serious riding. I wasn’t up to what these bikes were capable of then but I’m just saying that I didn’t waste 15 years riding junk before getting on a real prepped bike. I was also in a position to handle plenty of Hite-rites and Browning transmissions.

I’ve seen a lot of advancements in the years since and I’ve improved considerably as a rider. Marketing claims, after all the years, just sound like self referencing jokes. A lot has been tried. Many things have been just silly (Isolator hubs?!) Attempts have failed and some things have succeeded. Mountain bikes have evolved from essentially road bikes with fat tires to true terrain specific machines. Bikes really are very good now.

Every year it seems, we hear that this or that is a ‘gamechanger’ or that things are really so different with some new thing that you just cant go back. This is just hype. Rim diameters, plus size tires, crazy wheel paths, fancy drivetrains, wide handlebars, tubeless tires…they’ve all been referred to as gamechangers. They aren’t. I’m not saying that we can’t refine or improve our ride with many good decisions or products (me?!). I’m just saying that there are some items that simply can’t be removed from the equation now that they’ve arrived.

So few things are actual gamechangers. I count five.

Contrary to popular views, clipless pedals didn’t replace flat pedals. Flat pedals really weren’t being used outside of BMX back in the day. Clipless replaced quill pedals with toeclips. I began riding on these things and they simply sucked. You learned to work with it but it was never good. Your feet would hurt from lack of support and you’d loose feeling in your toes when you strapped them in too tight. Crashes were brutal affairs. When the PD-M737 SPD came out everything changed. Step down and you’re in, twist out easy, and shoes that were comfortable and offered tons of platform. Riding changed. We went harder, longer, and in more control. We could take more risks than when we wore toe clips as well. 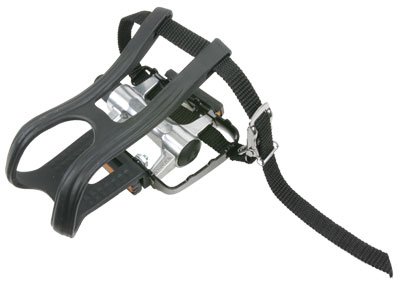 More amazing is that that design from the early ninties has remained unchanged until maybe next year. A 25 year run on an initial design. That’s an engineering miracle!

Today, it’s very trendy for folks to use flat pedals on trail. For some DH riders and BMX racers flats do work well although it is increasingly rare to see them on a race course. For most riders, flat pedals are slowing them down. Otherwise, clipless pedals are almost universally superior for honest mountain biking.

Here’s what you can do with clipless pedals:

Back when we ran cantilever brakes, it was hard to go downhill. It hurt your hands. Stopping power was weak, inconsistent, prone to fouling, fussy, and in some conditions pads would wear out in a single ride. Later v-brakes came along and heralded a new era of just slightly more power with all of the same problems. Wheels had to remain true for brakes to work. Mud had to be cleared. Ugh. I remember being one of the first of my crew to get a Trek bike that was sold with Hayes hydraulic brakes. This was just when they came out. Yes, some companies were trying aftermarket systems earlier but this is when frames and wheels finally came designed for this application. It was pretty nice. They did well on the first couple of rides. Then we did a rain ride and the difference was clear and dramatic. I had no issue at all while my friends were way off the back suffering to keep in control. Nail meet coffin.

Hydraulics don’t get contaminated. They don’t drag. I bleed my brakes every few years just to stay in practice. Nobody uses cable actuated discs that are serious about riding. It’s a lame joke.

As bad as the Hayes were, they were a revolution. Now, with XT twin pot and Saint quad pot calipers and cooling fins on the pads and rotors along with perfectly tuned masters, it’s incredible.

Another factor in the value of the disc brake is the ability to easily tune the leverage of the system with rotor diameter. 140, 160, 180, 203mm can make the difference when it really matters.

Back before dropper posts, we had to be able to ride very aggressively with a saddle rammed into our chests. The awkward working around the mast of doom meant we were very limited in where we could put our bodies when we weren’t in a perfect seated position on smooth ground. It was lame. Even for aggressive trail, I would have to drop my saddle with a 5mm allen wrench several times a ride then reset it again at the bottom of some trails. Some trails got full drop, others just an inch or so. QRs were always problematic so defalt was just a wrench. This went on until just recently. I put off getting a dropper post until the second revision of the Reverb was released. I didn’t want to waste my money on parts that would keep breaking as early droppers did. I kinda wish I had made the change earlier. 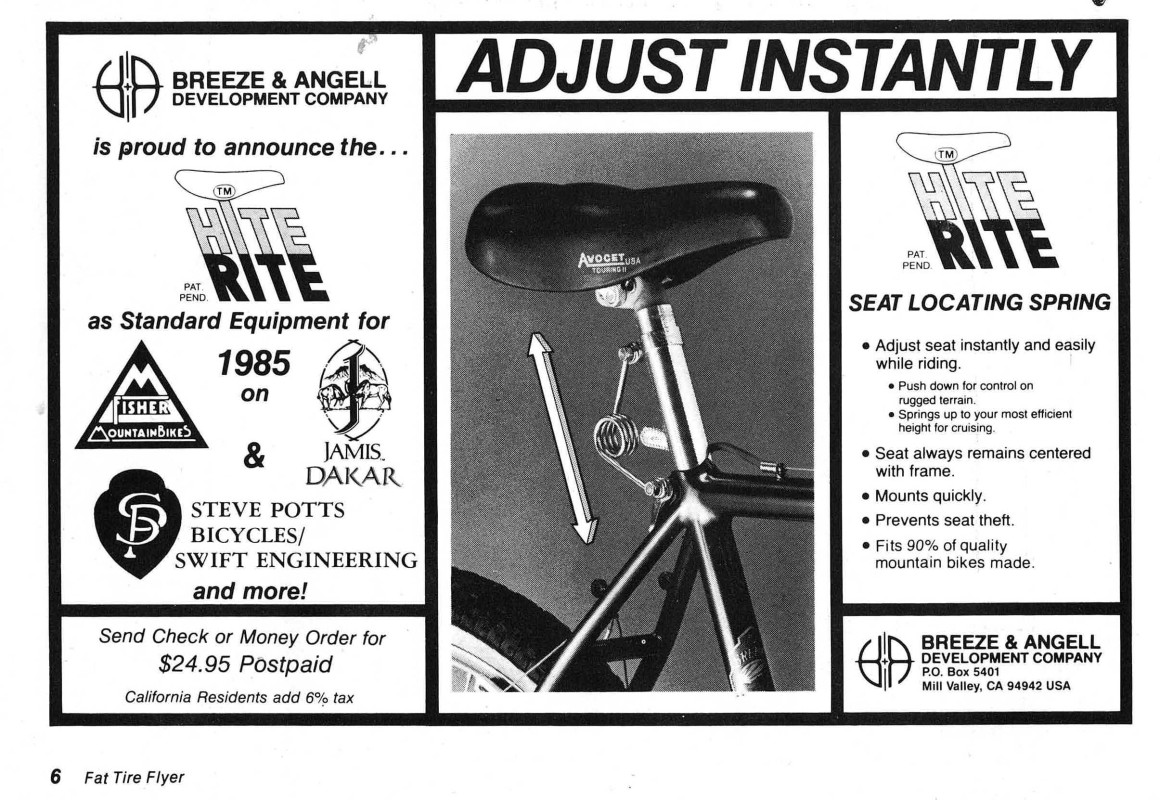 Once you ride a bike with a dropper post, you have to have one. It’s like crack. Highposting becomes completely unacceptable, even angering. Forget about using flat pedals with a high post. So much that the impetus for the dropper being put on the bike below was for aggressive street riding. It’s crazy.

Almost instantly, you see gains with the use of a dropper. Don’t be fooled thought. I took me about two years to really get good at using it. There is a subtle art to it. Riding without a dropper is just a joke.

It’s funny that at the flow trail, most riders without dropper posts don’t know how to change their saddle position. I can’t imagine all the trail they can’t ride down without that skill.

The last item on the list is a late addition. It came up while at an enduro race I was at recently where a very primitive method of timing was used. We are spoiled these days at races with the quality of timing. In XC it’s not as big of a deal, but in downhill, enduro, dual slalom, or any one of the other types of racing it’s been a big deal. Imagine a real enduro race without flexible and bullet proof timing?! 10 years ago, it was hard to run a major DH event and have timing continue to function. It’s all different now. Our local timing pros, Bike Monkey (Rhesus), offer live results via web where we can see times as the race progresses. Amazing.

The Strava phenomenon isn’t a favorite of mine but it definitely changed everything. Now, racers can train and know if they are making improvements. They can race people they’ve never met, at different times of the year. I even used my logger to resolve a timing problem at that recent race. Back in the day, none of this was imaginable….for good or bad.

Before this came about, we lost water bottles on descents, carried very little tool or clothing with us, and typically ran out of water at bad times. The Camelbak and bags like it changed all of that. Now we can carry more water than we could imagine needing on an average ride, comfy clothes, and even cameras.

But that’s not really the gamechanger for this mention. Once on the scene, the ‘camelbak’ allowed us to hydrate while riding down hills and through technical terrain. All we need is enough time with our hands off the handlebars to get the hose bib into our mouths and we are good. Hydrating prior to this was entirely dictated by the availability of a smooth traverse or climb. This did change things for west coast riders with monster downhills.

This bike is my cyclocross race/rough commute/adventure bike. It’s a horrible mountain bike. 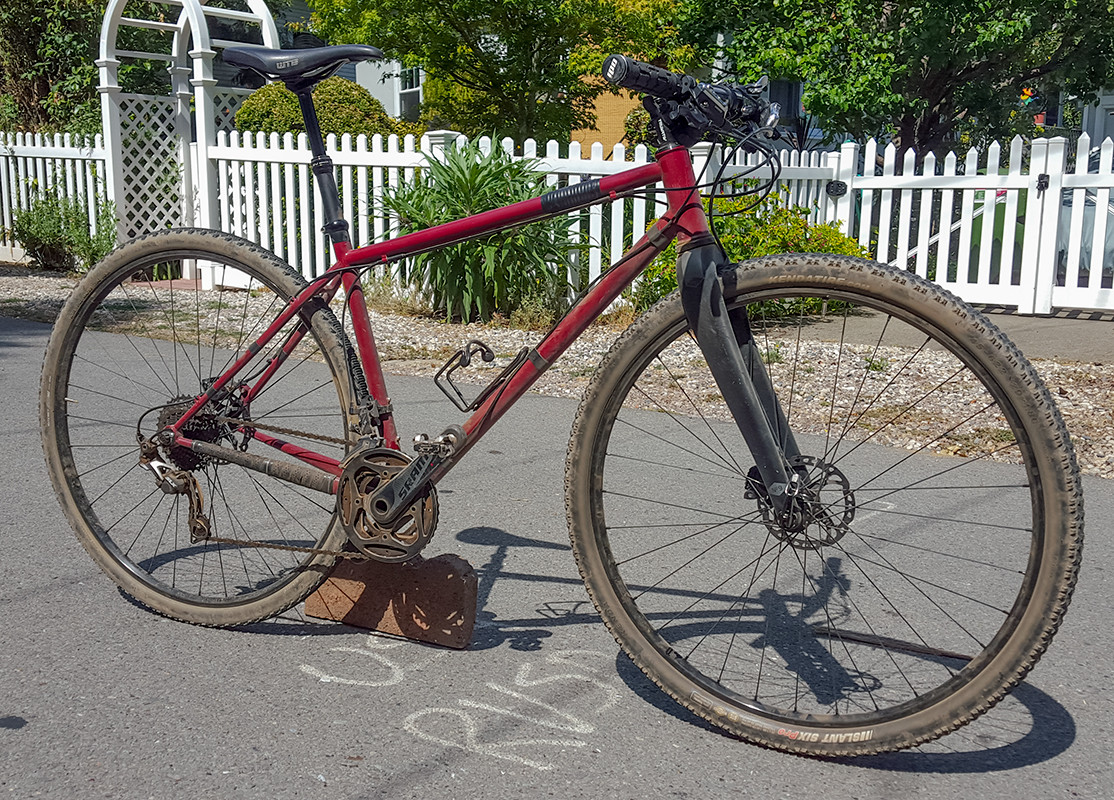 * The tires are small and suck.
* The rims are narrow
* The air pressure to keep from flatting is over 60 psi
* The handlebars are narrow
* The bottom bracket is far too low
* The riding position is forward and low to favor climbing, almost to the exclusion of decending (it get’s worse when really racing)
* There’s no suspension and the fork on the bike is garbage and way too stiff
* The 42/32-11/32 gearing is very tall
* The 140mm rotors are drastically small
* It’s got minimally sized pedals with no platform
* It’s short compared to modern mountain bike geometry

What’s it like to ride around Camp Tamarancho? It’s fast and fun. Sure, it’s not as fast as a modern wonder bike and can’t be hucked with abandon into a rock garden but it’s a kick to ride. It’s not easy to ride fast. It hurts to ride fast. But it can be done. Still, it makes for a fun ride as long as air stays in the tires. The reason is because it has the three gamechanges that I describe ,that without any one of them, would make the ride really suck in major ways. It could have been a singlespeed and still been fun.

This is an important test. What can be removed from your bike until the ride’s fun factor completely decays? What do you ‘have’ to have?

* Note, Southpaw lever is mounted odd here as different bars need to be used to get the lever placed well. That happens tomorrow. This position got me up and running today.