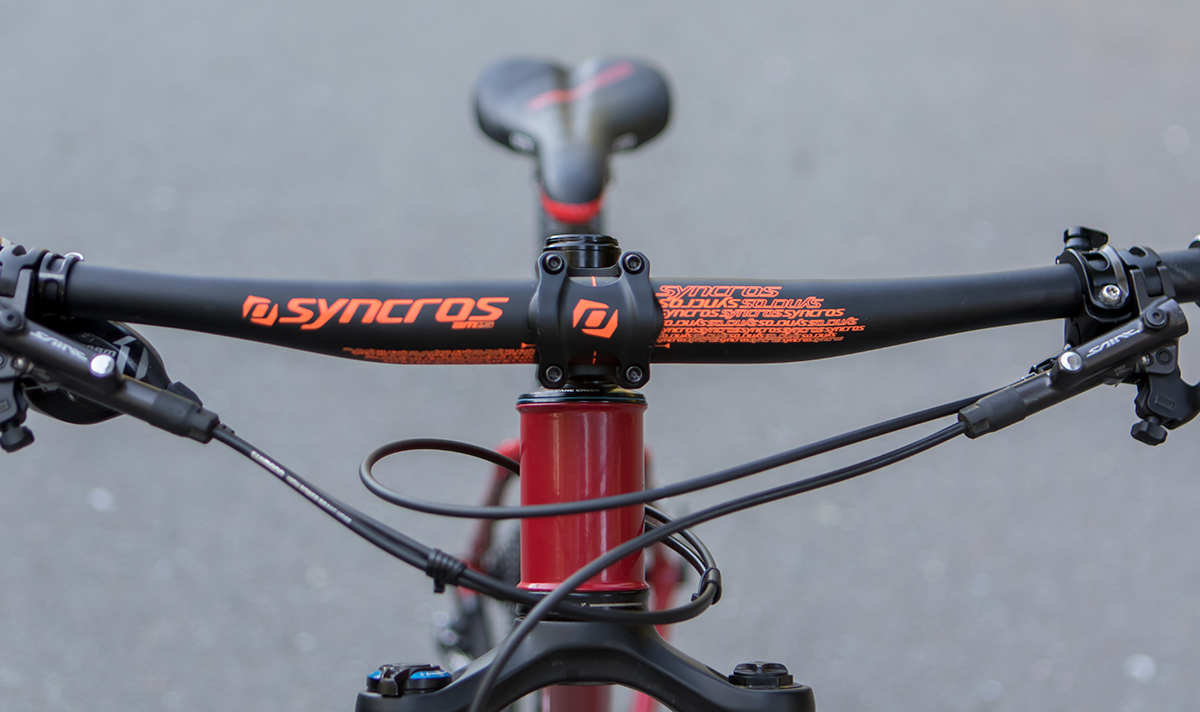 After the initial assembly of any new bicycle or motorcycle is complete, the shakedown starts. This is where ridingn starts and problems are realized, fit is adjusted, and tuning begins. On a new mountain bike, the first ride will include a pack filled with 2-3 stems, spacers, shock pump, tools and parts for a chainring swap, shock and fork volume spacers, etc. It gets cluttered and heavy. After a few rides, you know what the big problems are that you are focused on. After a while, the bike arrives. You’ve got it sorted and working the way you like for now. RedFive has got to this point.

How did the bike turn out?

This has to be one of my best bikes ever. It really turned out as planned. It looks fantastic but more importantly, the bike is rough and tough and built for speed and gnar. It goes up hill superb and downhill even better. It runs very quiet and smooth. Pedaling up the hill is about as good as I can get without compromising downhill confidence. A push on the pedals results in a crisp transfer of power to the ground. I’m really in love and hoping to improve on this platform.

This bike has some of the shortest chainstays you’ll find on an honest 29er MTB and probably for good reason. An issue with such short stays on a bike is that it lends itself more to riders that have a goofy footed stance rather than regular foot. When skateboarding, I ride goofy foot. On bicycles, I ride regular. Silly. I don’t understand it but I don’t have to. When riding with a regular stance, the right foot is rearward. This interferes with the derailleur. The foot’s heel will bump and snag on it. It can be disconcerting or an issue. Because of this, I am looking at riding switch stance in sections. Ha! A problem for 50% of us.

It’s a bit of a stiff bike as it’s built to smash. I am a little torn by the stiffness of the bike. I have to strike a balance of stiff enough to handle the hard loads but I like a very loose bike for riding fast on narrow trail. The yokes stiffen the rear end that I have to think for a while as to where and how to soften the bike up. 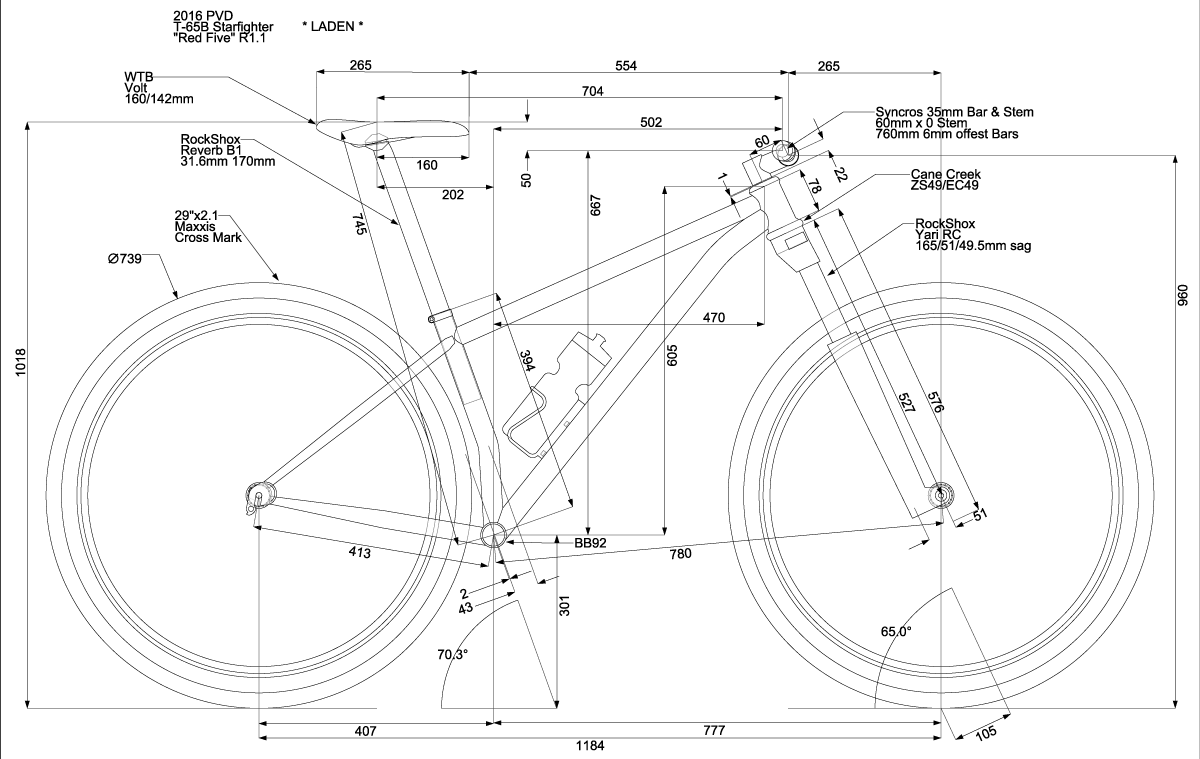 Effectively, the seat position is very steep. About as far forward as I can handle. Note 46mm offset from the bottom bracket center. If anything, it will try to move forward with a more up front cockpit on the next iteration. That is tough to do as torso control and my arms will be bearing a lot of load.

As I’m riding the bike and developing the fit around this platform, I’d keep the front center which is great but steepen the head angle. I’d like to get that back down to 30mm. I want this bike to be on the attack and that will all help. The steeper head angle will make the bike far more supple on those longer rides.

I thought the bike was going to be very low but it’s turned out to be not low enough. 5 lower bb would help. I was using my big enduro bike as a fit platform and translation is a bitch. 180/170mm bike to 165/0mm bike. Very different.

The 413mm chainstay was due to a cut error. Should have been 415mm and that would be nicer on the next bike.

Chainstay bend location got a little messed up. It’s fine but I could have had clearance for Q150 cranks rather than Q156 cranks. Fixture has been improved and bend is going up from 5 to 9 degrees.

I would also play a few tricks to lighten up the bike. It’s not a tank but it’s not light. I’m sure I could shave an ounce or so.

A new seat tube is on the way with a 30 degree bend instead of 15 degrees. That should allow improved dropper space for smaller riders and better clearance for stealth plumbing.

The hose entry for the dropper needs improvement. Still working on that. It’s not laying in as I had hoped. I need something flatter.

The yokes are great but there are issues. The seatstay yoke needs some real smoothing. It is very close to the leg and needs to soften up. The chainstay yoke just needs a slight clearance improvement for narrowest cranks and some aesthetic work. 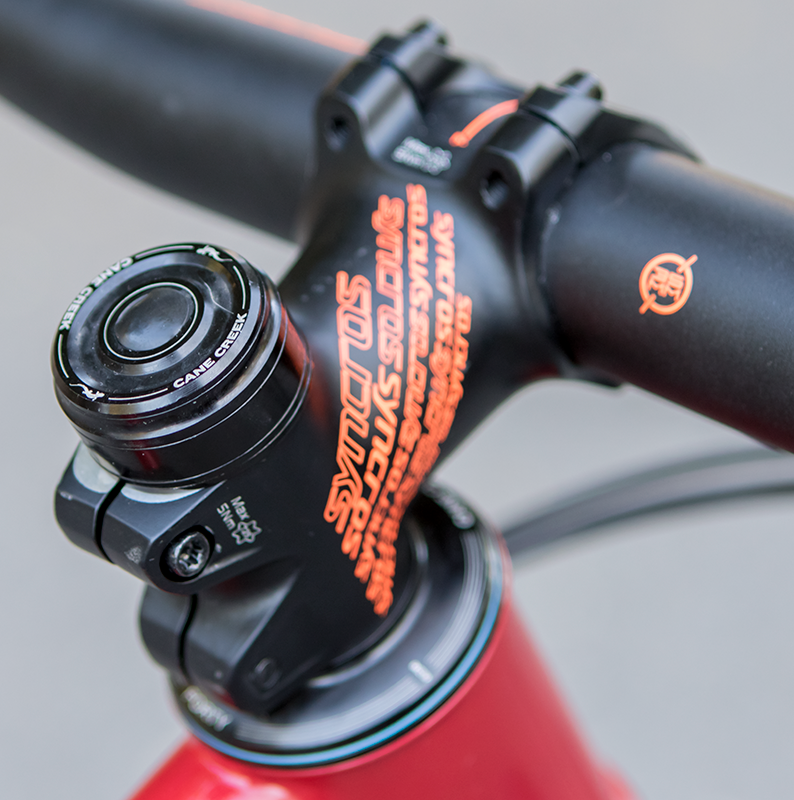 The stem and bars have been swapped out for a set of Syncros that I had around from the OEM kit on my big enduro bike. My fit for building this bike was a bit of a hail Mary pass. I based a hardtail 29er fit from a 180/170mm Enduro bike. I made a few guesses to compensate but there is a little that gets lost in the translation. The bike needed a longer lower cockpit. This helps the gas get put down and keep weight on the front of the bike for hard climbing. For rowdier days, I can swap in a 50mm or even a 35mm stem, but I’ll probably be using my big bike for those times.

I tried to get away with the 785mm handlebars. I’m really not a fan of this when going really fast in the tight trees we have on Tam. A few solid tree punches cures the hipster interest. 760mm is on the edge of too wide but a lot better than 785mm. The trails force this choice.

I’m not a super fan of the 35mm handlebar systems. They are crazy stiff and often uncomfortable. It doesn’t make much sense for the aluminum parts I use. For many folks, it’s a serious downgrade. I figured I could use some inventory here and set myself up for fancy carbon bars in the future.

While putting the bike together, I had to use a Reverb A1 remote (right, on the left side). It was what I had that fit for the moment. The A1 remote barely works with A2 systems. The A2 needs much more fluid to move through to the slave. Thus, very slow return speed of the saddle. In riding with the A1, you had to really plan ahead to get the seat up in time. With the A2 remote now in place, the B1 seatpost is running super nice. 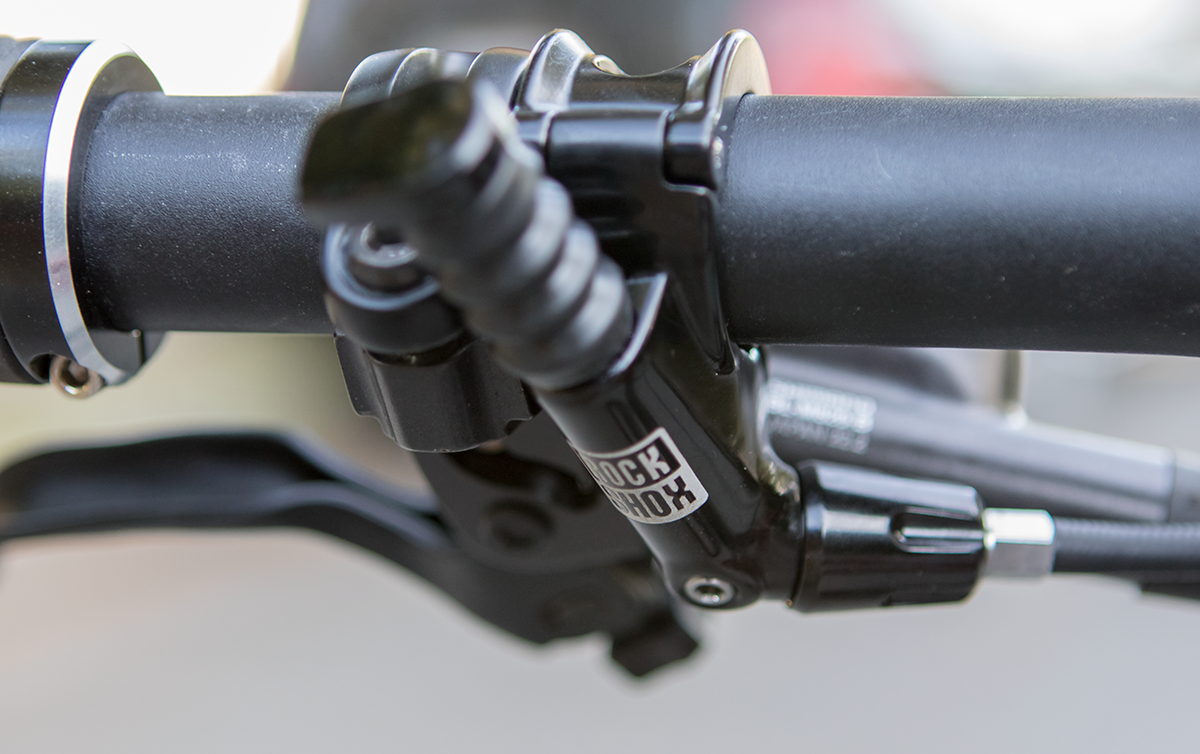 Supposedly, the RS SwingLink from the service kit can be installed in the R lever to reduce the empty stroke. I’ll try that out on someone else’s bike. 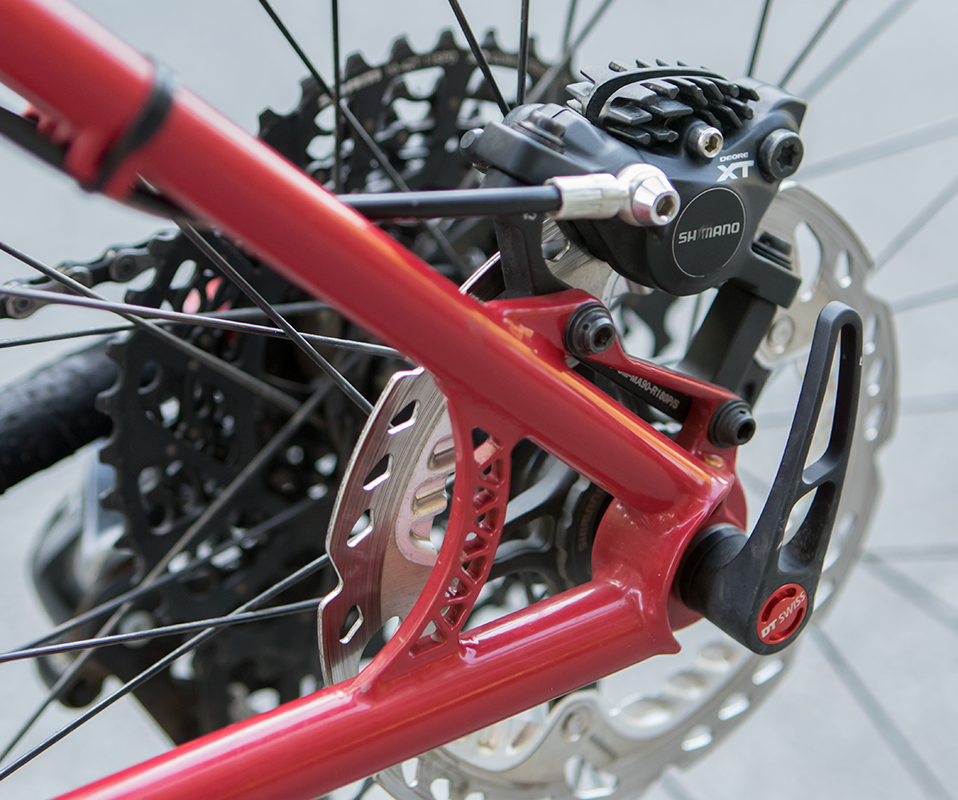 The RockShox Yari fork is really nice. The Torque Caps and stout chassis keep everything planted solid. It was also very cheap. I like cheap.

I made some changes to the spring and damping (@ 165mm travel) to get more performance from the fork. A hardtail uses it’s front end a little differently than a full bore enduro bike. I took out all of the volume spacers and lowered the damping fluid level (from topped out) to 115mm from 104mm. These efforts to reduce the progressiveness of the fork. To lighten up the compression damping, I swapped to a lighter Red Line ExtraLight (Blue, 8.6 cSt) fluid. I may even move to LikeWater to speed things up all the way.
75 psi. 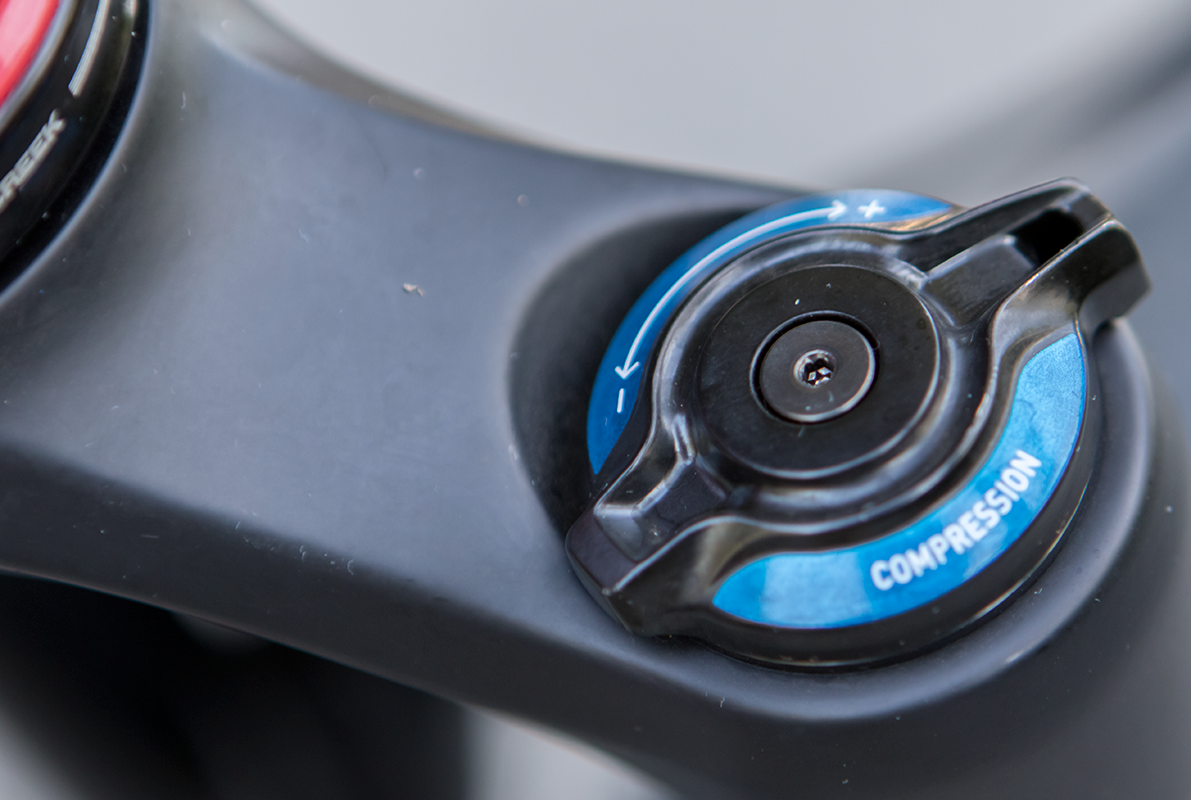 Gearing on the bike is working out. I was worried that the 30t would be a little tall for me at my weight and fitness. It’s working out ok for now. I’m keeping it around. I am tempted to upgrade to Eagle at the end of the month. 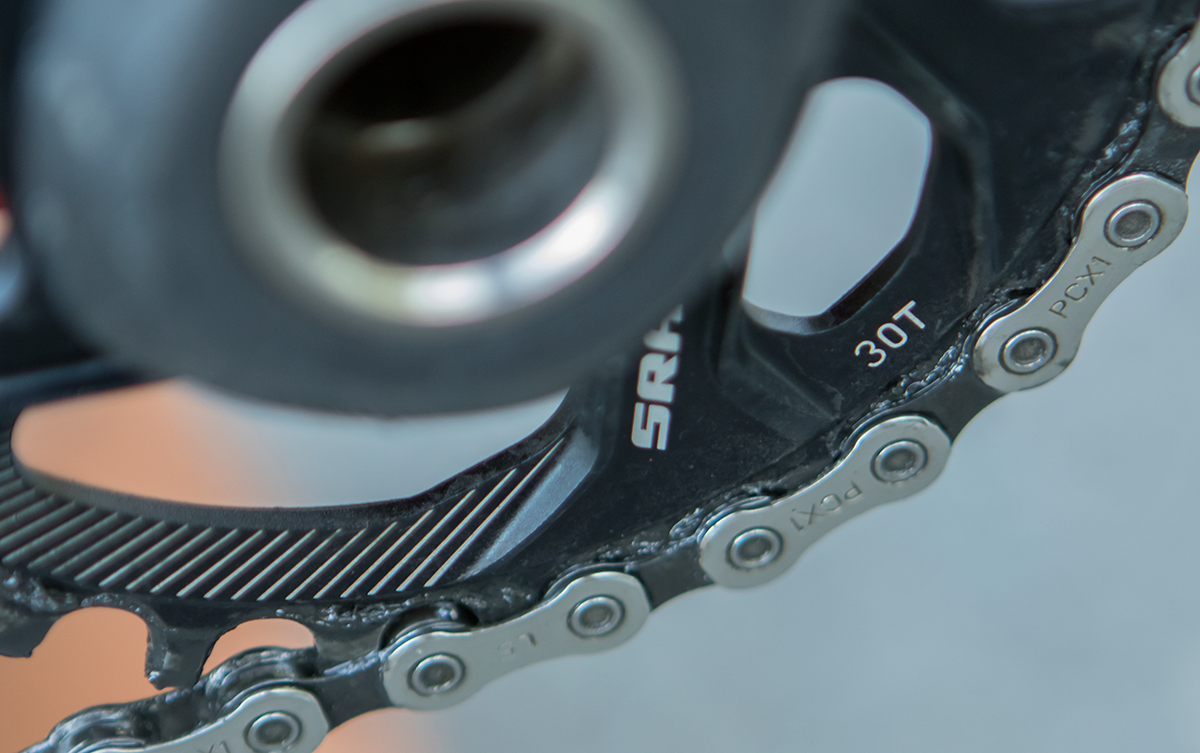 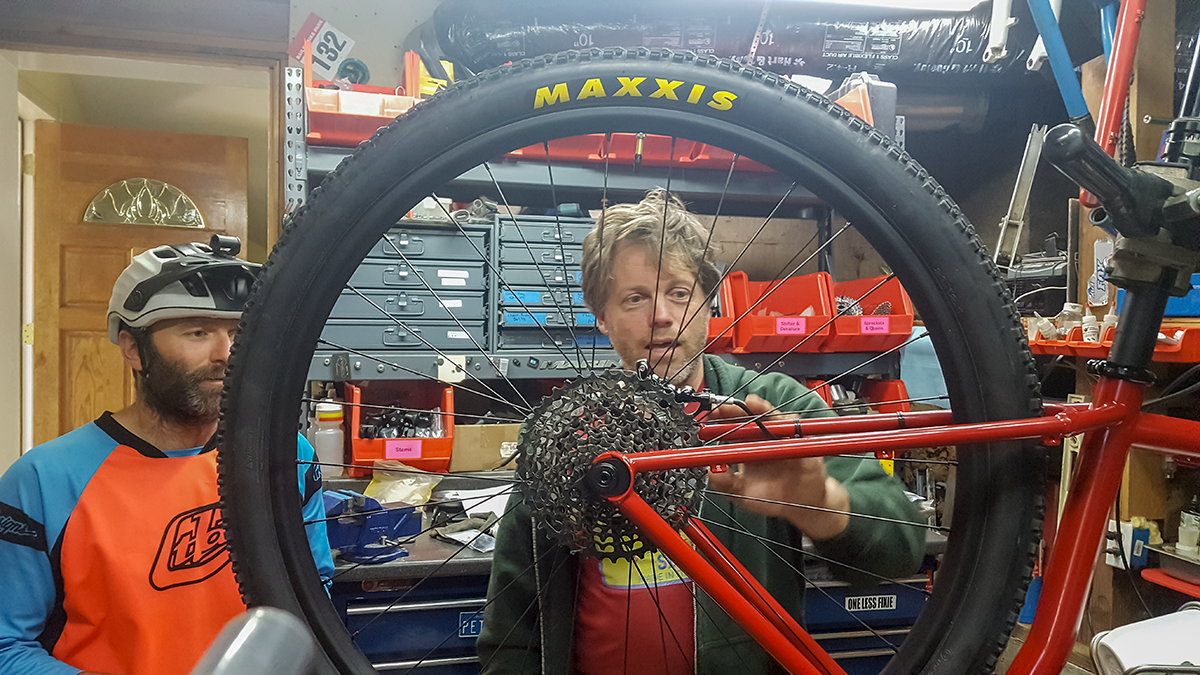