A while back, I took the time to design a very elegant spider for SRAM cranks. I loved the result but it was buried inside a digital world. I wasn’t going to make it out so it lived there. This happens often enough. A nice idea, some time put into it, and a completed design that is going nowhere. I learn so much going down these roads that I don’t mind that the design won’t become a reality. Every time I design something new I learn about my narrow vision and how to better work around it. We all come to designs with pre-conceived notions that aren’t supported by reality. We have to work and work to get to an honest design that is based on first principles not first impressions.

This design is a substitute for SRAM #11.6115.547.010 which is a very hard to get part. It makes it possible to use 110mm BCD (compact road) gears on a mountain bike with proper chainline on modern GXP crank interfaces. 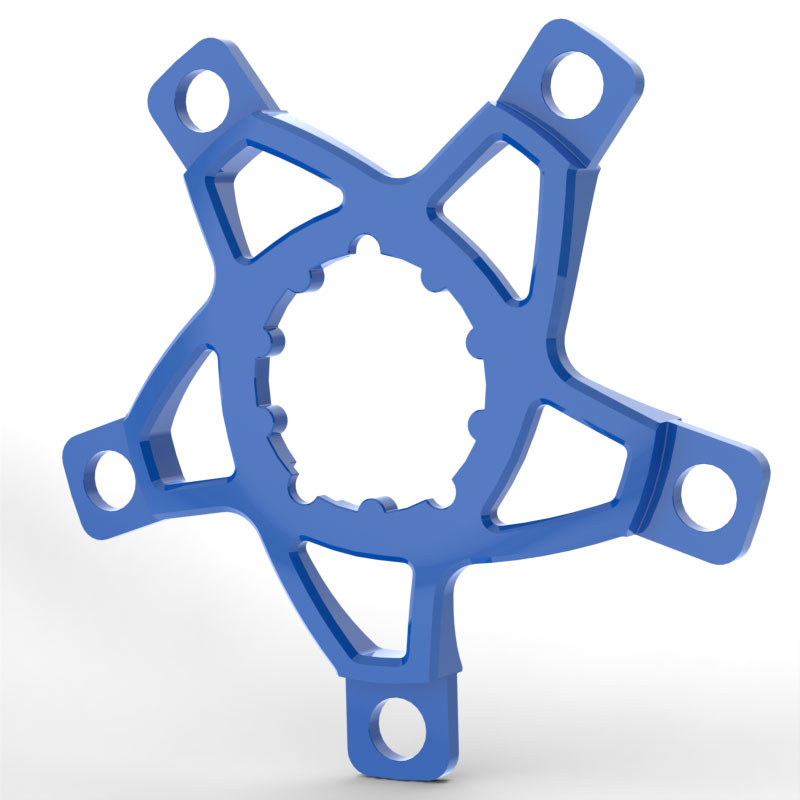 A couple of months ago, I got an email from a manufacturing student in Canada. he had seen the spider design that I had posted on my website and was interested in using my solid model as a subject to work on in his upcoming CAM class. He said he would 3d print a few copies for me prior to all that. I’m all for folks learning with real world stuff and taking on challenges so I supplied him with a parasolid of the part.

He stayed true to his word and a couple weeks later I had a nice package in the mail. The student was able to make me some nice 3d prints of the part but then his CAM course was cancelled. Poor kid. C’est la vie. We bounced a few emails back and forth commiserating and looking at his options. It’s tough out there in North America for folks looking to work in manufacturing. It scares the hell out of me, it should scare the young as well.

The print is a black abs filament type. It’s of a reasonable level of quality considering it’s the work of a student. I’m underwhelmed by the quality of the printing though. I usually am. Low end 3d printing rigs tend not to have the resolution, software, or expensive filaments required for high quality printing. Regardless, there is real value in this piece. It can be fitted to cranks and rings (not actually used) and handled in the real world. That gives me, the designer, a wonderful insight into where the design needs repair or if it is finished. 3d printing is a fantastic resource for a designer that needs to see, feel, touch an object prior to sending it to real manufacturing. This is the value of these tools. Not in manufacturing but in design validation. 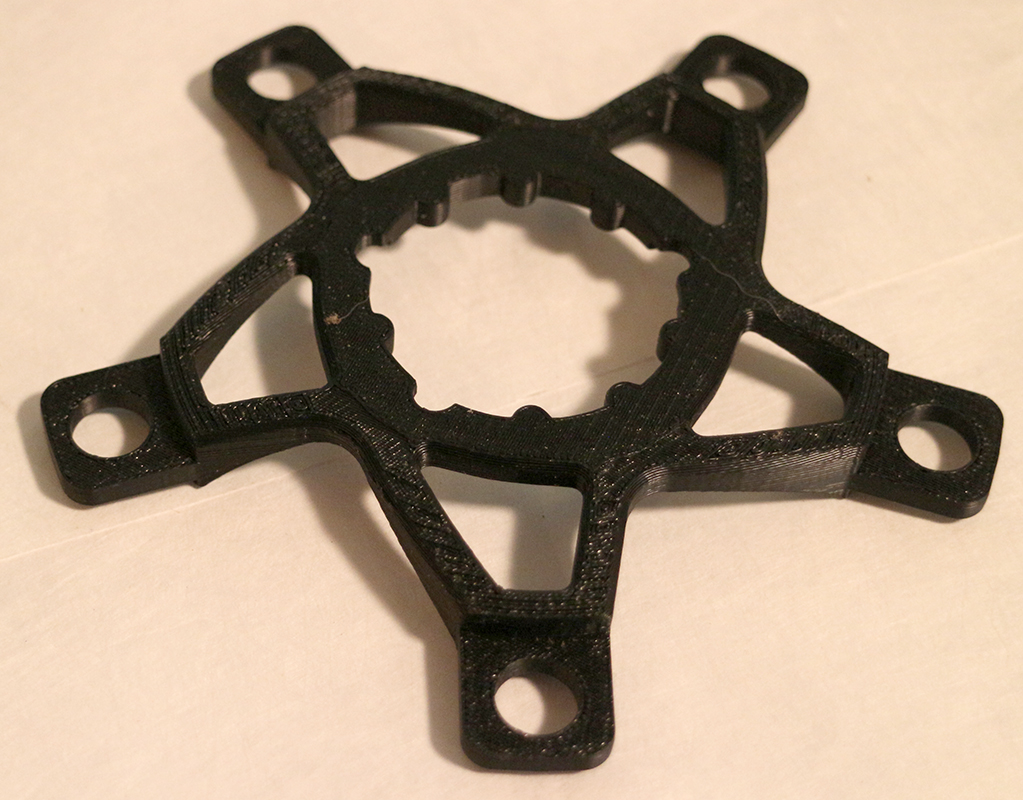 There is a big problem with 3d printing currently, though. It’s rarely used properly. I should say say that differently, it’s rarely used properly in the DIY culture but probably  in design labs as well. 3d printing is a scourge these days. It’s an incredible technology. The problem that I have is that the minute 3d printing becomes easily available, design suffers. Lazy or eager designers spend as little time possible doing their actual job (good design and modeling) and rush a model through to print for validation. I see it all the time. Ten minutes ‘designing’ and 6 hours printing. It’s the opposite of how good design works.

When I was younger, I designed some fancy skate trucks. The machining and cutting of the parts were done by vendors (back when we still used fax machines for everything). I had to produce models and prints that would be used making them. This is nothing new to anybody in this world. The difference here is that it would be me writing the check. If things got screwed up it was my hard earned dollars going down the drain that had to cover it and when you are talking about $4k of work, that’s serious. I truly learned then that you should never go to prototype, CNC or print or  until you are 100% convinced that you have done everything that you can with the parts in a virtual sense. Every chamfer and detail should be there. Every casting draft and drill point that will end up on the actual part should be there. It’s gotta be dead right in the computer before it moves forward. Nowadays, that concept is lost.

Another issue with the rise of 3d printer availability is that folks are so impressed with the fact that a 3d print can easily be produced that they put themselves in front of one without any true need. The world does not need a million Yoda heads printed on a million printers. This appears to be the primary reason for 3d printing in most peoples minds. In another sense, I would never expect to use or manufacture chainring spiders from a 3d printing environment. It’s just not how things are or should be manufactured. Things have gotten so confused these days with the blind leading the stupid. With Maker Faire coming up in San Mateo next month, it’s going to be a train-wreck of toolmaking for tools.

Lastly, Parasolid files are my preferred way of sharing solid model files. It’s similar to Adobe Acrobat, the end user sees what I intend them to see and has a usable file. It’s the native structure behind SolidWorks like postscript is the native structure behind Adobe products. Many people make the mistake of sharing actual SolidWorks (or other parametric programs) files. This is a great mistake in many ways. Of course, this leads to the incompatibility of past and future versions and what happens there. More importantly, though, I don’t want the sharee knowing my design process to get to the final model. I don’t want them to learn my hard earned tricks, how I figured it out, or worse, my poor form and uninspired design flow. Nobody should be sharing that. That’s yours and never theirs. Nothing good becomes of them seeing what happens behind the curtain.