I used Sea Otter this year as an excuse to get in shape and down on weight. It worked. I started in January and by race day I was down a legit 15 pounds and feeling strong. I’ve eaten so many raw vegetables in the past few months I don’t know what to do, sometimes salad twice a day and no fun food. I’ve also spent at least a hundred hours on the road bike just commuting to work and back. I also stopped drinking alcohol at the start of January. Good stuff for getting in shape but not very fun. What is fun, especially now, is riding my mountain bike as I am now light, strong, and sharp.

I decided to ride my cool Firefly 29er. A good lean hardtail with a nice set up cross country position. I actually did a lot of work getting the position good on this bike for cross country. I’d go out with a few different stems and posts in my bag and swap them out trailside until it was just right. It’s not hyper agro as I do have back issues that can get in the way. It’s just a great middle of the road position that is comfortable, climbs very well, and descends very well. This is such a nice bike for this race. Fast up and down. Just enough to do it all. 36/24 rings, 11-34 cassette, and Kenda Karma 1.90″ tires. Gearing was just perfect, awesome. Tires were super solid and fast, but giving up maximum traction for efficiency. 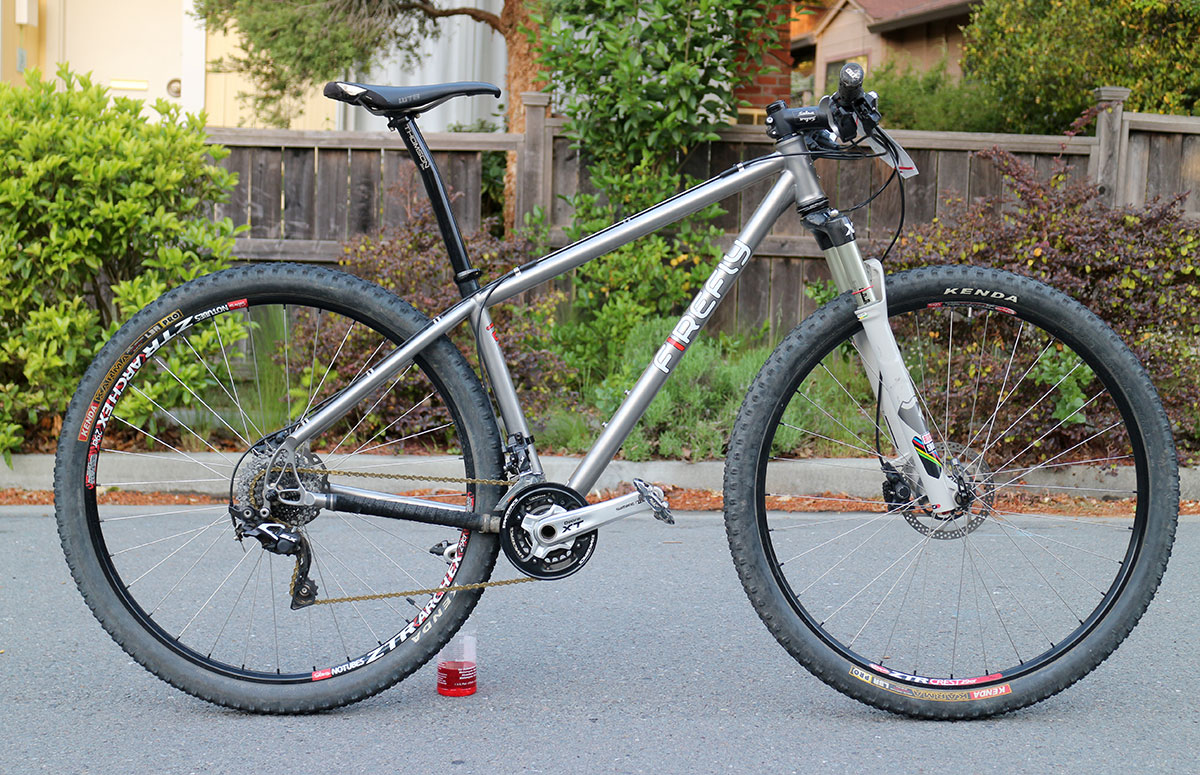 I’m not a fan of cross country racing. Asside from the amazing amount of suffering through the race, no matter the course, it ends up being decided by who is the climber and I’m not the best climber even in my best form. I can make hare-ball passes and move forward in tougher conditions if there is room to pass but on climbs I usually hope to hold my place or not fall back too far. That’s fine but it has left me out of the loop for the past 5 years since my last XC race. I was dreading the start of the Sea Otter race. I don’t like suffering.

I got to the venue on Friday. Laguna Seca is such an amazing place. Very beutiful for an American racetrack. After getting number plates, it was immediately time to do a survey lap of the course. I hadn’t been on the dirt of the Fort Ord BLM since 2008 so I had to figure out how to hold a line there. The course is what I call the ‘reverse loop’. Compared to the loop from past Sea Otters where the course went in the opposite direction. It’s a great course for what and where it is. No real complaints. This year though, the course felt very slippery and soft at the edges. The ruts on the fire road were very hard and square shaped and the sand traps on the singletrack were less than confidence inspiring. I left the course that day worried about one thing for the race; not getting hurt.

Starts are my most hated part of mass start races. Here, the racers are lined up and started on the Laguna Seca tarmac before entering the trails so that the group has thinned a bit. These are very big groups, typically, and it takes a while before things separate from the terror of handlebar bump induced crashes. The riders are sent around a third of the racetrack and up toward the ‘corkscrew’. There they are fed into the Fort Ord dirt roads. Very high speed descents on dirt, ass kicking climbs, and snaking singletrack make up the race. Highlights include an amazing sand bar decent and a four mile long climb out. For CAT1/2/pro it’s a 19 mile loop. Pro/CAT1 men do the loop twice. Screw that. I’ll stay CAT2.

I arrived to my start on Sunday morning just on time. I had tried to get something to eat early enough that morning and stay chill. I got myself all ready to ride and full XC’d out. Minimal gear. Light as a feather. I didn’t have much time to warm up on the track so I sided with staging for a good position for the start. Things were looking ok. I was hating in my head about what I was about to go through. Then I woke up, decided to clear my head and just love the suck. Gotta love the suck.

My mind was clear and I was in position. It was wierd, my mind really was oddly clear. The gun went off and I saw my wheel roll forward and other wheels lagging behind it. I was in front. I had got an awesome start. I was pushing it but not crazy hard, wondering why I was where I was. First to the first corner. A hole shot! Realizing that I didn’t want to be out in the wind alone, I eased up a bit to let a few guys work hard in front of me. I was in a good place. I even had to fight to keep from getting dropped on the track by the new effort. Entering the dirt I was in the back of the lead group. Right where I wanted to be. All I had to do was survive there through the first few rollers. I did. It hurt but I did it. Now I was in my dream position. A long super fast downhill where I could rest up and pass a bunch of riders. One after another I passed them. Hare-ball lines a plenty. Rolling up into the base of the super steep climb I was elated. I was in the top 10 with lots of single track after the climbing. Wow! Carrying speed up the hill I pulled in front of another rider. Problem, I needed a downshift on my front but I had to power keep my flow and hold it. I did the worst thing I could do. I downshifted under hard power. My race was immediately over. Pow! No chain and a banged up knee from the sudden release. A poorly planned shift and bad luck shattered my chain in two. No tool. Just a pump and tube. This was just after Marshall 3 (M3). The Marshall station right by had no tool so I was out.

Thus I did a coaster run down a mile and a half of singletrack to the M5 Marshall to await SAG. It was actually very cool coasting out. Such a long section on trail and I just had to push kick over one small hump. Nice trails.

There you go. My best prep and start of a race ever and foiled by my own poor technique, poor tool choices, and just plain bad luck. I felt fine about it all. Really. I guess that at the last minute I really got my head into the game as much as anything else and that allowed me to accept and still enjoy the day.  Plus, I was able to get back in time to watch the pro women and men run the downhill course. It’s always a great air show then. Sea Otter is so cool.

The tech; I’ve never broken a chain like this before. I guess that I’ve never done such a stupid shift under so much power before either. The chain broke into two distinct sections. What I figure happened is that the chain was broken mid-span, everything blew up, forcing the quick link disconnected in the carnage. It’s hard to see the break that’s within the section but it is really messed up. Pretty gnarly either way.

Corrective action; My friend Max Houtzager commented to me that “that’s what light tools are for” or something along those lines when we were talking on the downhill course. I admit that I wasn’t really dialed in for this race. I was letting it hang out too much and really didn’t put the time into my kit and bike just prior to the event. Next time, I’ll focus a bit more and go through my checklist. I was treating XC racing more casually than a normal ride and that is what turned a DFL into a DNF. 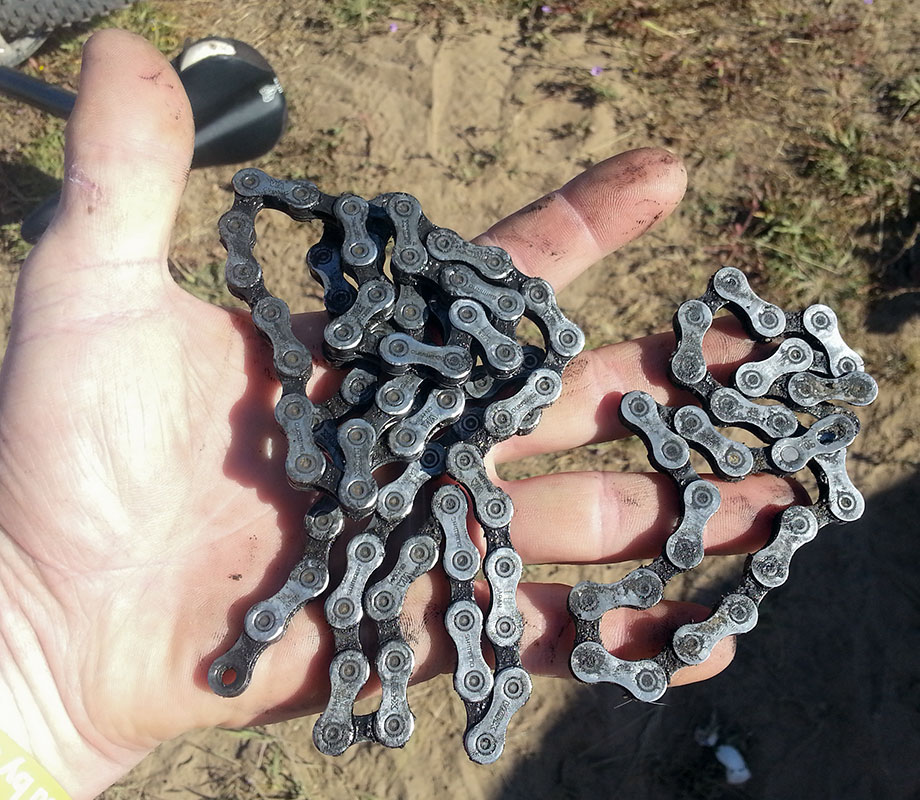 Every year I go to Sea Otter I go to La Tortuga for the best Cuban Torta in the world. This place is just the best. The diet was off and race fueling was in force. I really wish that I lived closer to this restarant as it is far better than any Mexican restarunt that I’ve gone to in San Francisco. Maybe the distinction is that this is a torteria instead of a taqueria? For whatever reason, every plate and torte here is just awesome looking and crafted. Go! 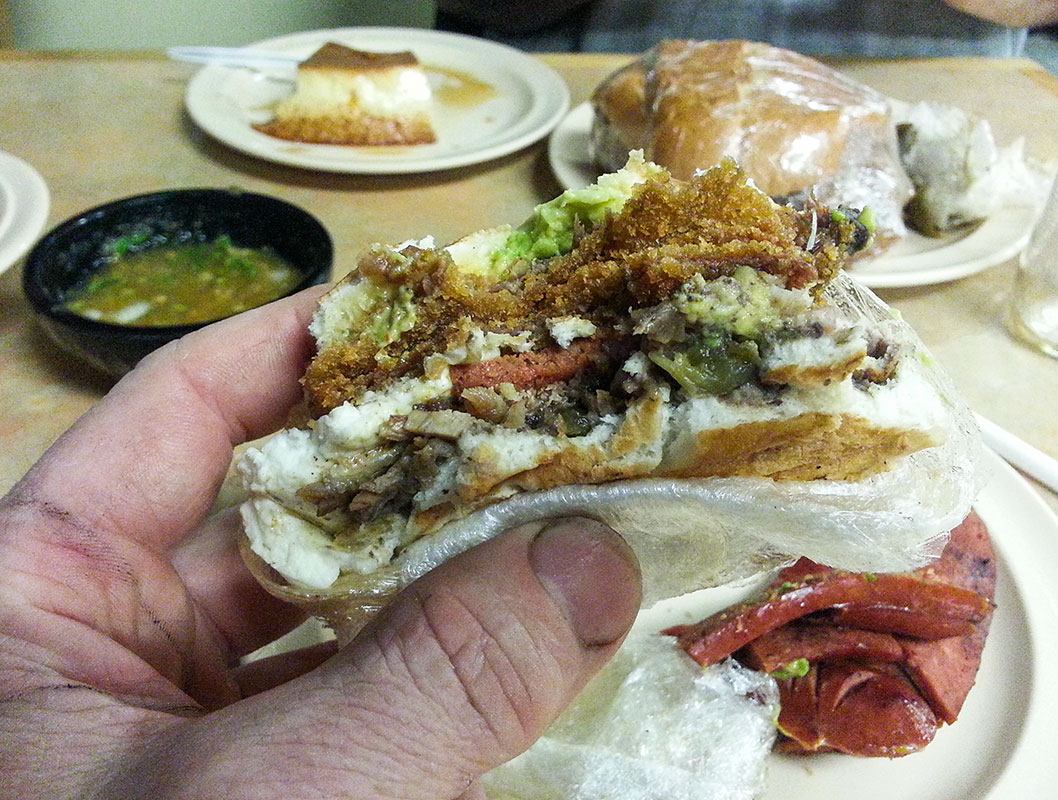 As I said, I did a bunch of dieting prior to this weekend. This weekend was the goal date to get my weight down. I’ve decided that I’m going to keep it up for downhill season and Northstar’s opening day. The Northstar mountain bike park will be open in about 5-6 weeks; “The Mountain Bike & Hike Park is scheduled to open Friday, June 14, 2013, weather and conditions permitting.” I’m not sure about racing (Northstar) DH this year though. I’m probably going to be focusing on the fun. Regardless, I want to be down on weight and riding fast!

I took my usual load of pictures at Sea Otter. Lots of stuff. I didn’t get pictures of everything that I wanted as my camera battery died mid show. Dang. Another bout of bad planning and poor choices. I was really expecting a lot more cool new stuff. The coolest thing there were the Vans/ODI grips for sure. ODI is really pushing hard lately with product and swag. Good for them.