To manage all the gear that goes to the range when I’m  shooting, I finally broke down and bought a proper range bag. I searched around and found that one of the most recommended bags is in fact one of the cheapest. The MidwayUSA Competition Range Bag ($44.99, #259680). I got one. It’s a fantastic bag. It holds everything and keeps everything in it’s place. There is a bad issue with the bag and that is the shoulder strap. It’s horrible, it feels cheap and it in fact broke after several uses. It’s also extremely uncomfortable. It would have to go even if it hadn’t broken. 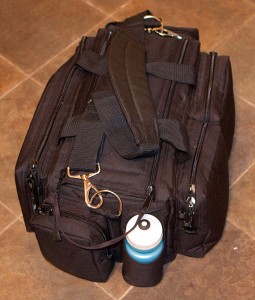 I’ve been inspired to do a bit of textile work lately as a convergence of a few things. I have a major job at work that is going to require a bit of sewing. I also recently got a Vickers Combat Applications Sling from Blue Force Gear that I did a few modifications to (dedicated QD and reroute strap for a cleaner system) that needed stich work. Also, the great work of Tactical Corsets and the detail they go to in what they make, especially all of the low IR signature materials. Very cool.

To mount a replacement strap properly to the bag I had three choices, just clip a strap to the stock ‘D’ rings, cut and restitch the straps with a tri-guide, or make an adapter. I didn’t like the idea of keeping the ‘D’ ring as it’s unstable as can be seen in the picture. Restitching the bag is a little above my skill level at this point, thus I needed to make an adapter. 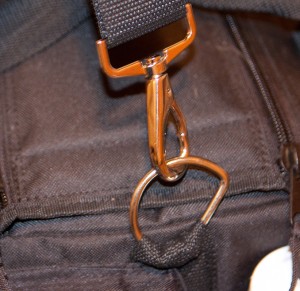 I really geeked out on the design of this little part and then wasted a bit of CNC time to make it. The design is pretty simple but the detail is quite cool. The plates on the sides give the effect of curved parts while still being a flat plate. It’s very stable as well. 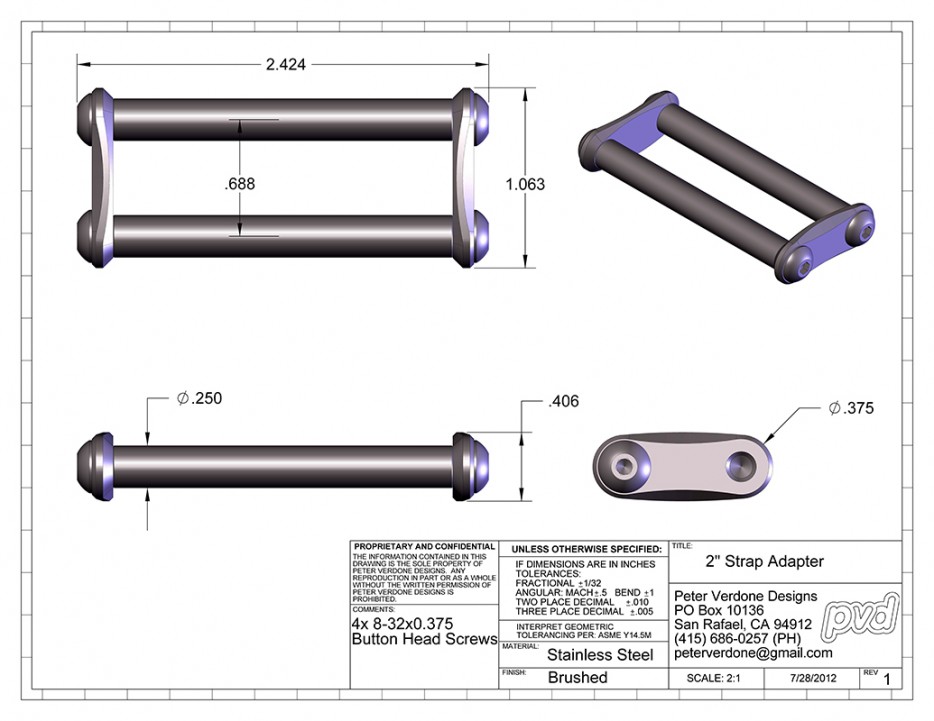 The design of the strap was simple, again, but with nice detail. It’s a strap that adjusts from 42″ to 48″ and holds the 40 lb (loaded) bag. It has an ITW Nexus Fastex clip and a corded d-ring at each end. The webbing is polyester webbing 2″ (10K) (Charcoal) with polyester webbing 1″ (Black) backing up with PALS stitching. This is similar to tactical military gear. In the military, MOLLE (Modular Lightweight Load-carrying Equipment) gear uses PALS (Pouch Attachment Ladder System) grid of webbing. I should have used a strip of 1.0″ Mil-W-43668 (A-A-55301) Type III nylon webbing with 1.5″ intervals between stitching. Instead I used the polyester webbing as it was what I had. I now have the mil-spec material on 0rder. I do still need to order some bonded nylon milspec V-T-295 Type II, Class A Thread, T-69 and MILSPEC MIL-T-5038 Edge Binding Reinforcement Tape, probably type III.

An important lesson that I learned in this project was that I need to focus more on nylon webbing than polyester and even less on polypropylene. Nylon is only slightly better (in most cases) than the polyester but with an additional cost. As nylon is mil-spec then it is the way to go. As a shoulder strap, there is some need for heartiness as a flaccid strap just doesn’t work that well. Just think of how stiff straps are on quality messenger bags. My stitching a dual layer I got the heft with some degree of comfort. A pretty cool result.

The ITW Nexus side release buckle (female) is a GTSR Loop Body. GTSR is prevalent in Mil-Spec applications. In addition to the military, Camelbak uses this system, as they are a major government contractor. One issue with CamelBak is that they also mix in some WSR25 & WSR20 (world side release) side release buckles for hardware. This crates a challenge as WSR buckles are very difficult to source in small quantities. HERE is ITW’s Nato catalog. Timbuk2 deviates entirely from the mil-spec by using Duraflex Steath SR Buckles.

It doesn’t take much to do this kind of work. I have a little Kenmore 385.15202400 sewing machine that I bought (delivered) on Craigslist for $50 a few years ago. It had only been used once and was in the original box. Of course other machines would be better than this one but this machine still get’s it done. If you do have interest in this stuff just get started.

I think that the strap turned out great. Given that it was a test run and learning experience. The real upcoming work is a few camera straps (Canon 40D and the new EOS-M I have on order) and a few rifle bags the fit nice, have dual shoulder straps, and look better than the generic bags that are available. 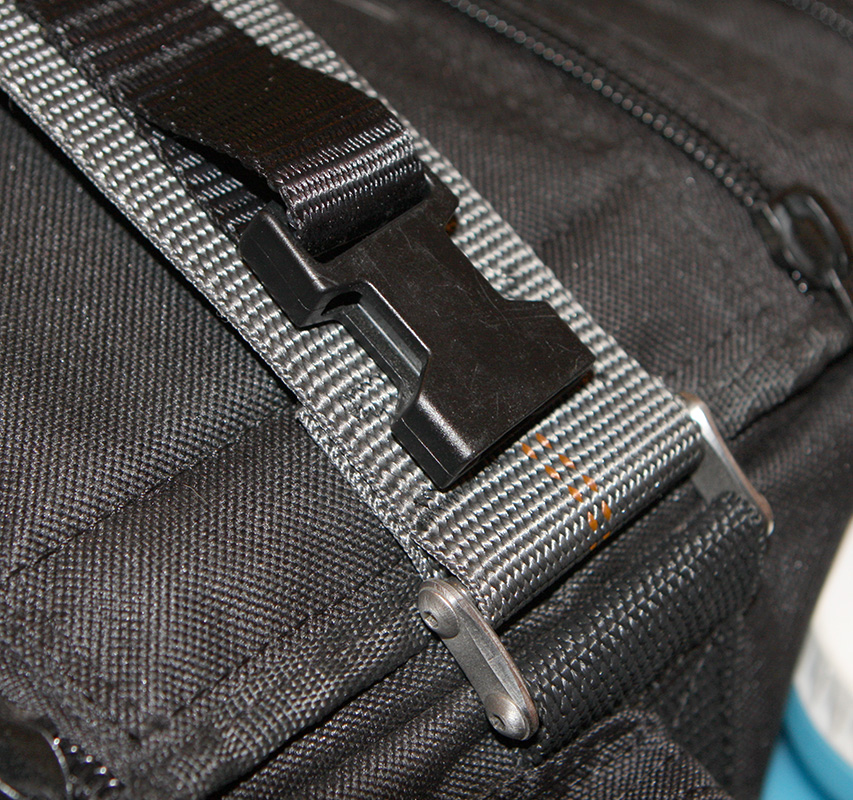 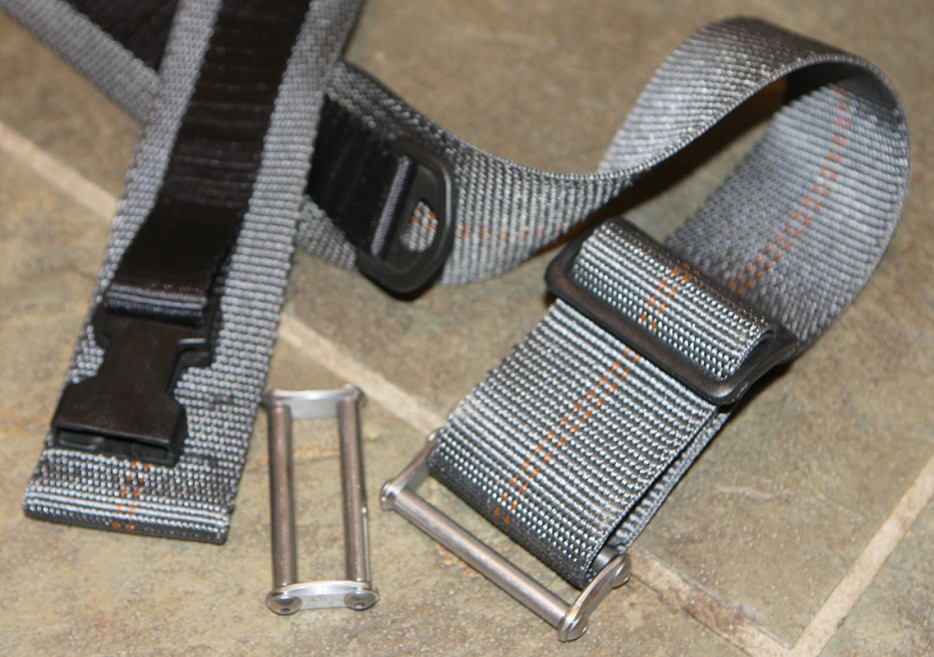