Sometimes, you need to bring some heavy artillery with you out on a ride. A day out riding horrendous trail at high speed warrants this. There’s a new breed of big trail bikes this year and they are quite a bit different than the big bikes of the past. Bikes of old were heavy, pedaled horribly, and didn’t really perform that well. Things have changed with geometry, shocks, and materials advancements. These bikes work much better going down the hill as well as going up. Two bikes stand out from all the rest. The Giant Reign and the Santa Cruz Nomad. Both are designed for one single task…to win World Cup Enduro races.

This is the 2014 Santa Cruz Nomad. Medium. A large would have been a better fit. 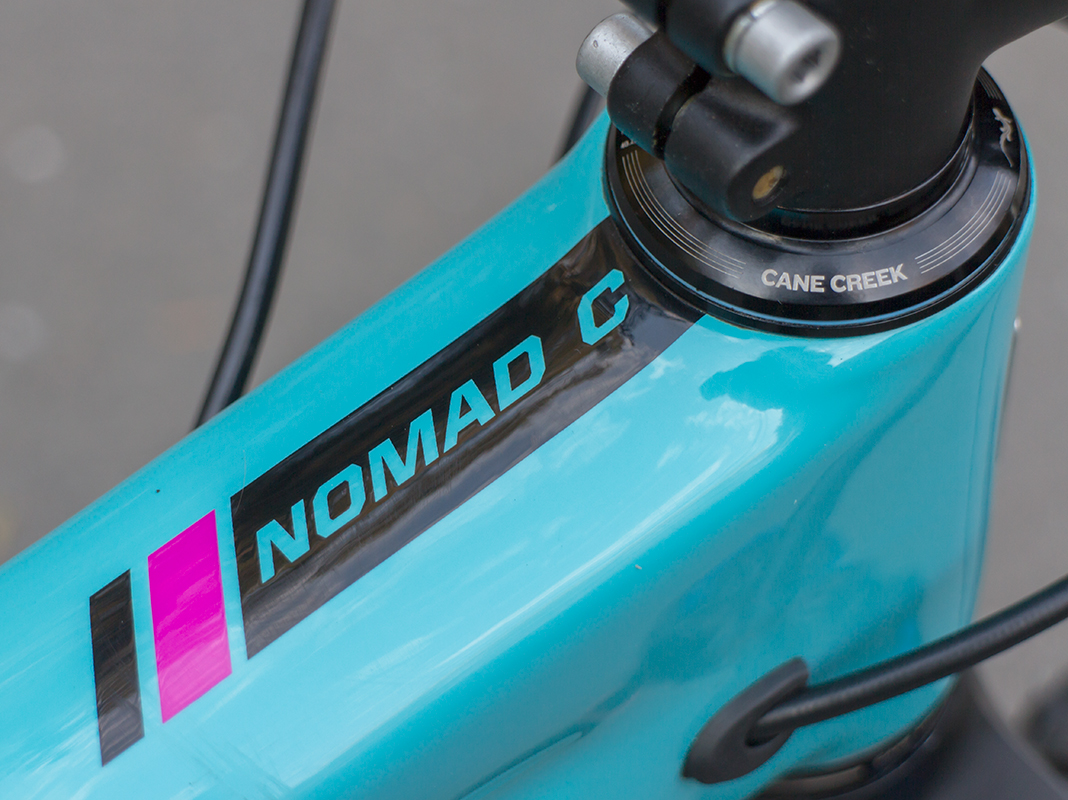 After a few colorful Facebook threads, I was contacted by Quoc Phan of Tam Bikes in Mill Valley to take a very well spec’d Nomad out for a week of riding. He was looking for the kind of input nobody but PVD could give. I’m specific about what I like and clearly say what I think. Without hesitation I took him up on this offer. This coincided with a week I had off from my day job. This gave me time to test the bike in a deep way. To feel what it would be like to have one of my own, set up like I like.

Of course, I did some work to the bike right away to get it working the way I needed for bay area riding. My perspective for this bike is that of a Marin trail rider and bay area local. I wanted the bike posed for use here and in the Bay Area as a versatile trail bike that could handle the climbing challenges as well as the hard descents. Anybody could set this up as a pure descender and call it done. A pro racer could deal with the set up poorly for climbing to shave seconds off the descent. I wanted to know how it would work as an everyday trail bike. The way 95% of the people who buy it will be using it. It needed to climb well but still go fast as hell down the hill.

Changes:
* Race Face Atlas Flat bar, 740mm. Trees. Period. Bars over that for Marin riding are simple novelty items. Tight trees are real on these trails.
* Salsa Pro Moto 3 stem, 100mm x -15, much improved climbing performance with little loss of descending prowess.
* Continental Trail King 2.25″ front tire. Grip. Period.
* WTB Wolverine 2.2″, light (A horrible tire) I should have found a Maxxis CrossMark 2.25″ EXO. It was a shame not to have a sturdier tire mounted on the rear although it was a problem only once.
* 160mm rear rotor. 180mm rear on trail is just slippery. I trail brake so big ain’t great and the rear really jumped out a lot with the 180mm.

The five main points to garner in all of this:

Some other points to mention:

120 x -7 No. Ruled out in 100 yards. Too much reach.
110 x -7 Reach is great for climbing. Not low enough.
110x-15 This was the best for climbing but not for shredding really hard.
100x-15 Better mix. Sacrificing some climbing for DH stability. Probably the best balance here and more comfortable over time

Many pro and top expert riders that are my size choose to select a large size frame for even faster speeds on their race bikes. The large is about 25mm longer up front compared to the medium. The increased length of these bikes allow for the use of shorter stems that produce similar riding positions to what I ended up with. It is something to consider but will also add a degree of cumbersomeness to an already long bike when riding on technical trails and climbing. Choose wisely here. Are you really looking to win races or are you just riding trail rough?

An interesting comparison for folks to make to understand this bike is that a large Bronson has a 10mm shorter front center compared to the medium Nomad. For many people, the Bronson would be a much better choice of bike. An Angleset and a full 160mm fork would be enough to set the Bronson up even better than the Nomad for some pretty crazy riding while still climbing very well and having front gear choices. My personal preference would be a large 5010 with an Angleset and 160mm fork for a Front center in the 720mm range. 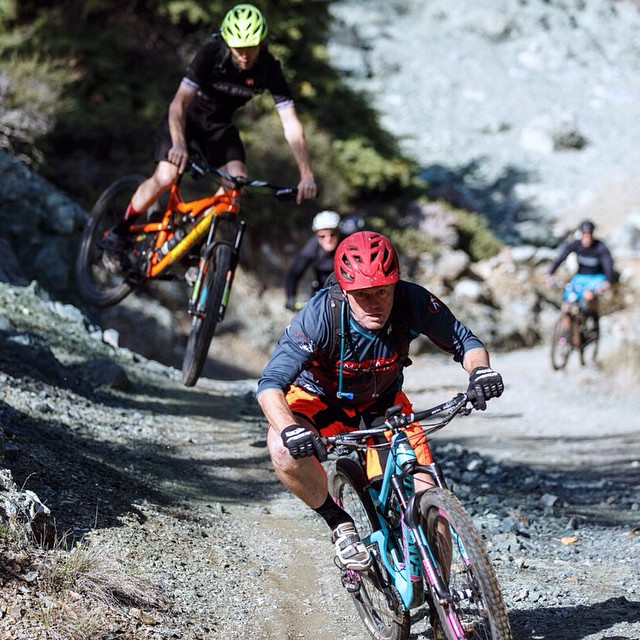 I’m an unabashed fan of multiple chainrings on the front of my drivetrain. It’s nice to have some real range and gear choices when riding. This was honestly my first time out on the XX1 system. It works excellent. I really had no issue with shifting the entire week. Still, the XX1 shifter is utter garbage and completely inferior to a Shimano unit. It really is the worst part of the system and a major downgrade. The 32t ring that the bike was set up with along with the 10-42 cassette was fairly well matched to my climbing ability but forcing me to work hard. I could have used a bit lower gear for the longer rides but I also ran out of gearing on many descents that I could have pedaled deeper into. Considering this as a narrow focused bike, it could be acceptable. As a bike intended for a more broad use, the single ring will be an issue. 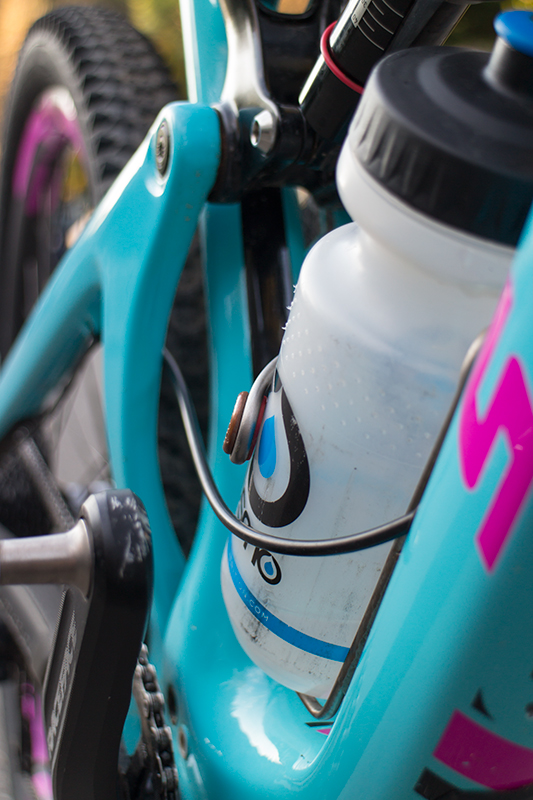 The Race Face Turbine Cinch crank is very poorly spec’d on this bike. It is otherwise a gorgeous piece but it is way too wide (Q177mm). A XX1 Q168 crank would be a far better choice with regard to fitting the frame provided the requisite durability (ala pedal strikes) is achieved. Another issue is that the Race Face ring interface isn’t compatible with SRAM GXP standard that most aftermarket rings and spiders are designed around. Crank choice is definitely something to give good thought into for this bike.

One issue that I have with the engineering of this bike is that so much real estate was ignored rather than taken advantage of in the lower pivot area. I’m sure that an easy 30% increase in pivot stiffness and durability could have been achieved by designing specific Nomad linkages rather than digging into the existing parts bin. Getting these bearings spread apart as far as possible is the goal of the design but it seems ignored. Ugh. It’s a glaring issue. Also, without going to BB92 interface, Santa Cruz leaves so much possibility off the table. I don’t understand the use of threaded bottom brackets on modern bikes. The lower link area on this bike is something that really need correcting on revision 4. It seems like such a shortcut on V3. A real shame for a bike so well sorted and on this level. 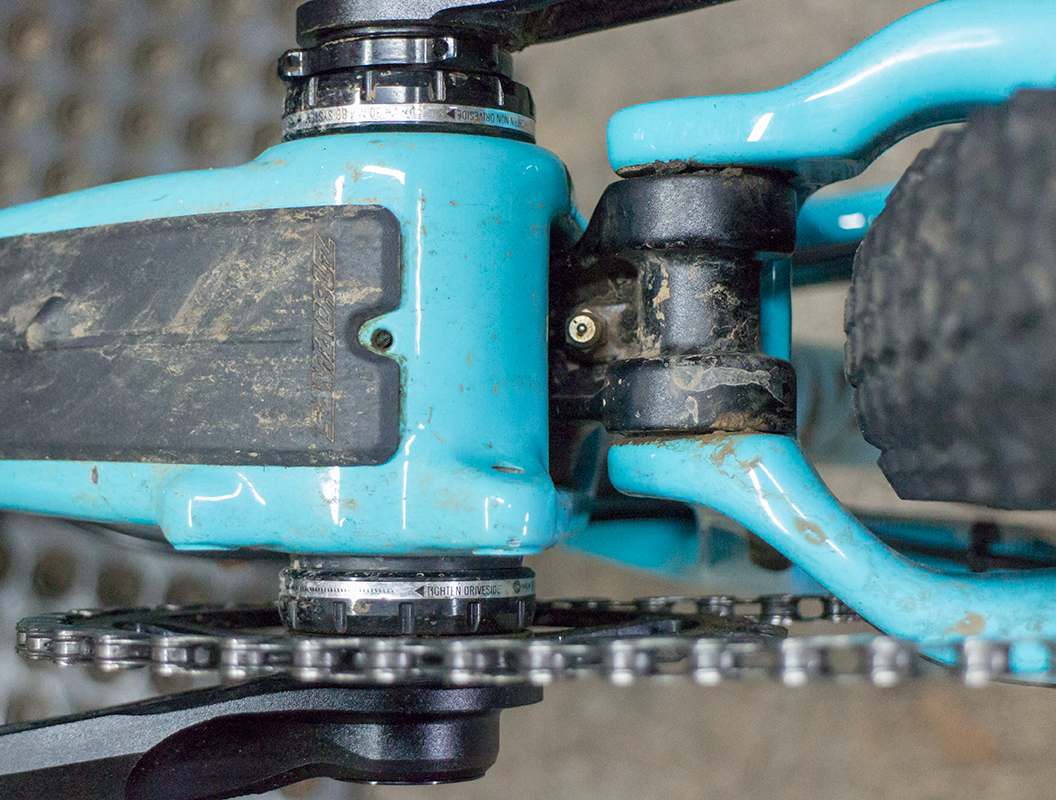 Here’s the crazy thing about this bike:

It has a 5mm longer front end than my 2013 Giant Glory DH bike. Granted, to help with climbing, I have the bars 95mm forward and 10mm lower of what I would on the the “big” bike. Amazing how times have changed and how quick.