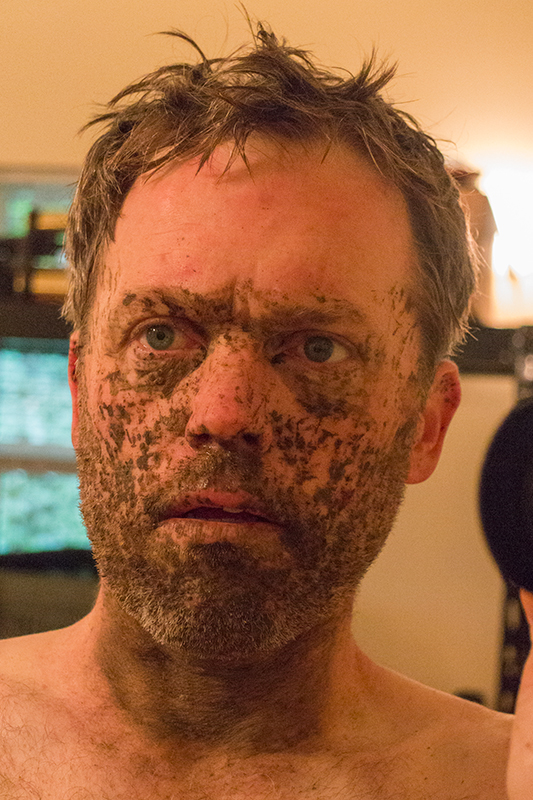 Due to the drought that we’ve been facing in California, this post is coming up a lot later in the season than I would have expected. We finally have a little bit of rain and the trails no longer resemble dry summertime conditions. The slippery dusty hard trails has been replaced by soft slop and traction. It’s great and it’s messy.

Terminology gets messy here (ha!) . What’s the difference between a fender and a mudguard? I don’t really know. In reality, they are synonymous and dependent on which side of the Atlantic you reside. I guess, when it comes to bikes, I think of fenders as preventing debris from being flung into the air and landing in my face and eyes or damaging my bike. I think of mudguards as preventing mud from accumulating in sensitive areas typically around the wheels, suspension, and drivetrain.

Of course, mud is something we deal with on mountain bikes, especially in the winter and early spring. I’m lucky that where I live in Northern California mud isn’t the biggest problem. We don’t have swamps. We don’t have wetland (or much of it where the riding is). Sticky peanut butter mud is rare and in known places. Still, light fine mud and water do get to be a problem. The elements fly into your eyes. That’s the biggest issue with water and mud, being able to see. I really don’t care about the filth otherwise…unless it’s getting into my mouth. But I need to see what’s going on to ride at speed and in rough terrain. A good front fender will virtually eliminate mud blinding.

Why not choose goggles or glasses? That’s more than easy to answer and for a few reasons. The primary reason is that while goggles and glasses will prevent mudblinding your eyes, immediately you will experience a different problem; lens blinding. The lenses of the eye-wear will quickly cover with mud and smear. It takes too much time to clean the lenses well on a ride, so you always have compromised vision. It’s just a complete hassle and really not worth the time. Also, where I ride and when it’s muddy or rainy, lenses fog quickly. Riding is a workout and the heat and water make vapor. Even if you are just getting doused with clean water your probably not going to see much once the lenses fog.

I do wear large vented ‘Heater’ M-Frames for eye protection when dealing with dust and rocks in dry conditions and in races. These are, hands down, the best money you can spend on eye protection outside of wet conditions. Too many people haven’t used eye protection this good. Those that do, never stop.

So, back to fenders. In past years, I’ve used the T.H.E. DH Fender for most of my messy riding. The XC Fender they make are just too small for serious use and not worth getting. The DH fender is an amazing product. Rarely will anything end up in my eyes in even the worst of conditions. Still, times change. As forks have evolved and alloy crowns of the past have been replaced with carbon. Where there was once a steerer tube to mount to there is now a crucial carbon monocoque. I am ending up with fewer and fewer bikes that I can mount the THE Fender. The search for other options has become more serious.

Of course, we’ve all seen the ghetto inner-tube curtain style thing folks have used over the years. A quality version of that is made by Rapid Racing Products NeoGuard. The product made by RRP a nice product. It looks good. It’s only problem is that it really doesn’t work. I’ve tried it honestly but it’s only about 1% better than using nothing at all (see selfie above).

Currently, my favorite front fender is the Mudhugger. It mounts low in the fork. Slightly over the wheel and under the arch of the fork. It’s similar to the Mucky Nutz Bender Fender . I like the Mudhugger a little more than the Mucky Muck as it’s curved with the wheel and is a bit more of an intentional product. The Mucky Nutz Bender Fender is far simpler and cheaper but I believe it’s slightly less effective. Mold injected ABS versus cut ABS sheet. 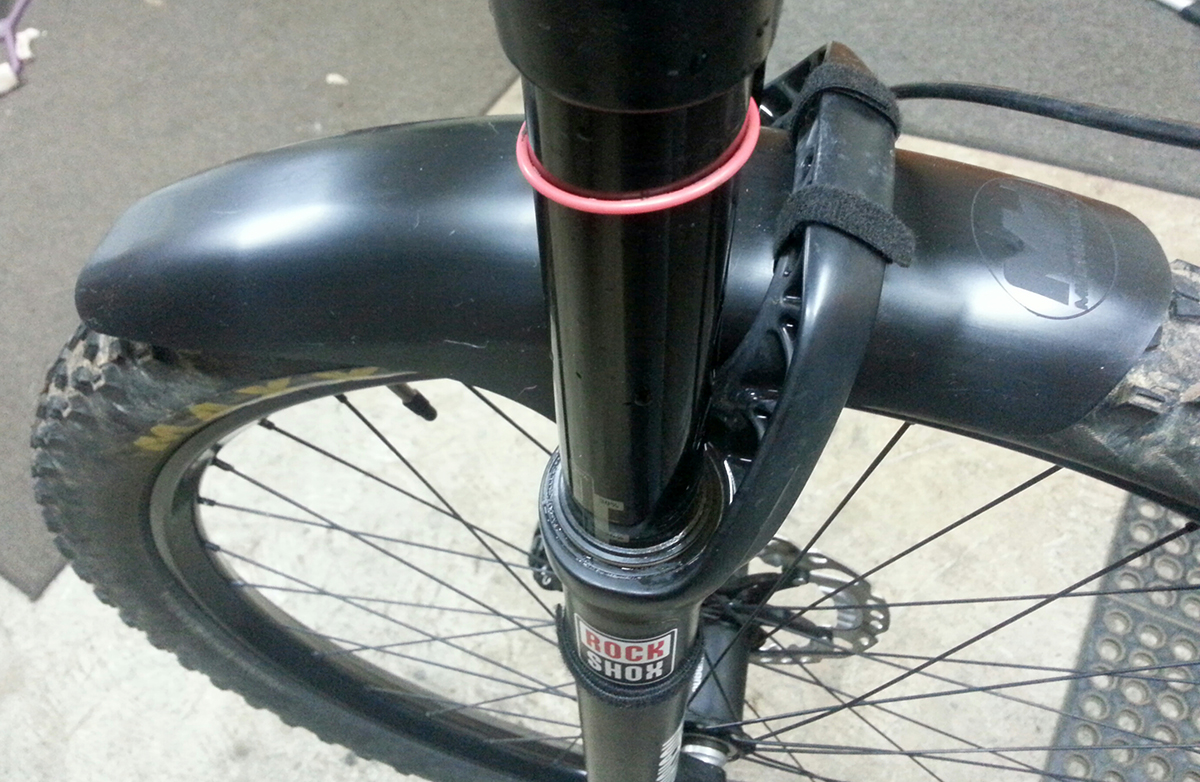 All of this leads to the question; Why don’t manufacturers build fenders into their designs? Personally, I believe it’s because they know that 97% of their market isn’t ever going to use the product in poor conditions, probably much at all. They don’t need to add cost or complexity to what they do. If the marketing department doesn’t need it to sell the product then they don’t add it. Simple. Of course, Marzocchi did this about 10 years ago, but I don’t think many people knew to use it but this was also after most performance minded riders had already made the leap back to RockShox and Fox. C’est la vie. 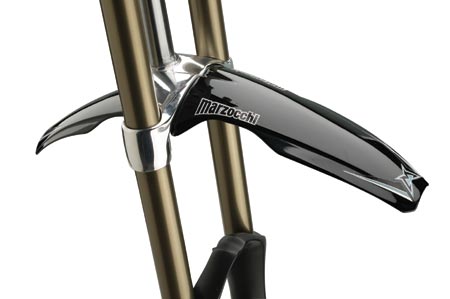 At the 2014 North American Handmade Bicycle Show in Charlotte, NC Enve Composites introduced a new rigid mountain bike fork with an OEM integrated fender and adjustable offset. The fender is hopelessly too small to do anything serious on a ride but it is a bold move in the right direction. The offset adjustment is presumed so that the end user can use 26, 27.5, or 29″ wheels without adverse handling change due to the frame geometry. 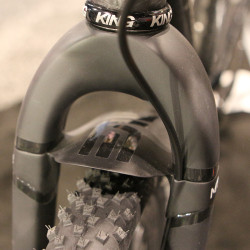 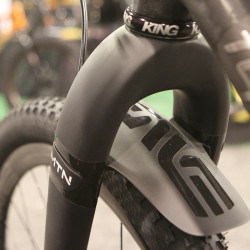 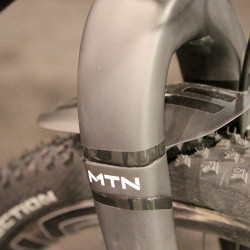 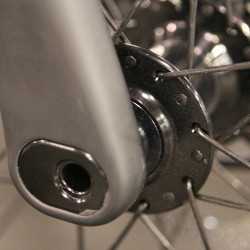 At the rear of the bike, there isn’t much need for a fender. Folks you see with commercially available rear fenders on mountain bikes are just crappy riders and sissies. It is just not possible to ride a mountain bike aggressively with one of these in place. The fender get’s in the way of getting behind the saddle and over the rear wheel. This can’t be expensed just to keep your butt dry which isn’t really important when riding in poor conditions.

Some bikes, like the Santa Cruz V-10 and others have what I would call a mudguard. This small piece of plastic (or even frame member) in front of the rear wheel that does a lot to keep garbage and filth from flying into the important working parts of the suspension and drivetrain of the bike. Most bikes have nothing like this. The critical regeion around the chainwheels and lower pivot slowly packs up. The cable housing fills with grit and begins to slow shifting and bearings fail early. If there is one thing that a suspension bike should come with (aside from a front fender) it’s a rear mudguard. Bonus points if this piece can reduce spray onto the rider but that is really not the priority design consideration.

For my Giant Anthem 27.5” bike, I decided that I really needed to provide a mudguard. While I tend to ride singlespeed hardtails and geared hardtails in poor conditions, I will still get caught riding my squish bike on trails that have a lot of moisture still on them and soft mud sections that will accumulate. I had a bit of 0.040” black ABS sheet handy. I cut some off and hacked it up a bit to get a rough mock up for what would somehow fit into the frame and hold itself in place without getting in the way of the tire, the derailleur, and the back of the seat tube under full compression. With that very rough piece in hand I could draw up a pattern in the computer that would allow for cleaner detail and consistent curves. It took a few tries, about 3 times. Each getting closer to the final result. I had tried to keep some extra material above the top of the rear triangle for a little more splash protection. To clear the seat tube under compression, I had to thermo form the sheet to fold back toward the tire instead of straight up. Without making a form, the part looked pretty lame with inconsistent forming. Even after forming, the part still interacted with the seat tube under full compression so I abandoned that direction and brought the extension back into the rear triangle.

The part is simple and clean. It holds itself solidly in place without any velcro or cable ties.