We often hear about the search for the vehicle of the future. Americans like to believe that it’s an electric car and that we are still years away. It’s not that. It’s not even a car. It’s the lowly scooter and it’s been very available around the world for over 60 years. The truth is the truth even if you don’t like the answer.

Back in 2006 or 2007, I had had a bad run on my sport bike. I had got a bunch of serious moving violations and a few rough crashes. The governor was threatening to take my license away and my survival odds were looking a bit slim. Even if I had planned to keep running my sportbike, the insurance for me at the time was insane as a result of all the carnage. I had to cool out for a while and clean up my record. I decided to try something new and give the maxi-scooter a try. They are low in power and cheap to insure.

For the years since then, I’ve been using a 2005 Honda Reflex 250 (NSS250) for commuting to my work at SFSU (SF, near Daley City) from Fairfax. It’s an approximately 27 mile trip each way. I had done a bit of research at the time I bought this, my first scooter, and found a used model with a bit over a thousand miles on it. Incredibly, even with my horrible driving record, it cost me around $150 to insure. I was stoked.

I was amazed. After years of motorcycle commuting the scooter was a shock. It is so much better from a utility view than any motorcycle. The Reflex did everything I needed it to do and nothing more. It’s great for dates and going to events in the city. It’s strong enough to bring two people to the top of Mount Tamalpais. It really did it all… and nothing more.

That was all back in 2006. I have an awesome sportbike again, but when it comes to commuting, the scooter is my only choice. My best choice.

Here are a few reasons why the Reflex is awesome:

* 80 miles to the gallon!
* Super low insurance
* Invisible to police, especially in silver
* Cheap parts
* Ultra comfortable riding position for rider and passenger.
* Dry trunk storage space for luggage when riding and helmets and gear when parked
* Great protection from rain
* No chain to maintain
* Single handed operation, gas and brake, left hand and feet can be used to hold stuff
* Open space in front of rider allows a 50 lb bag of dog food to be carried easily.
* Parking in even more places than motorcycles
* Super light and easy to move
* All day stop and go riding without overheating

I put about 20,000 miles on the scooter. It was a trooper. I crashed it hard 5 times and only had to put $250 into it for new cowl plastic. It was designed to be beat on. Really the only modification I had made to it was to add more preload, thicker oil to the forks and change the variator weights.

While the 25occ engine is perfect for most anybody that lives in an urban environment, I was pushing the engine quite hard as it was redlined about 90% of the time I was on it. Near the end, the engine was obviously very tired and needed some freshening up.

Finally, the base gasket gave way and oil sprayed outside the engine as much as inside. Given the age of the scooter, that it would need piston, rings, gaskets, valve job, and a few unforeseen things, plus about 25 hours of my time working in lousy conditons, I made the decision to replace it. It just isn’t worth it for me to fix it right now.

After doing research again for the best possible replacement with, hopefully, some improvements. The Yamaha Majesty 400 (YP400) was clearly the best choice. Since it’s release in 2004, very little has changed so any model year is about as good as another. The engine is on the larger side, but nothing absurd like a 600cc. It’s fuel injected and very well made.

I hunted around for a while and eventually found a silver 2007 (YP400W) with 9k miles for sale in close by Sausalito. I’ve put a few miles on it and made a few changes to it. I figured it would be nice to post about my observations. 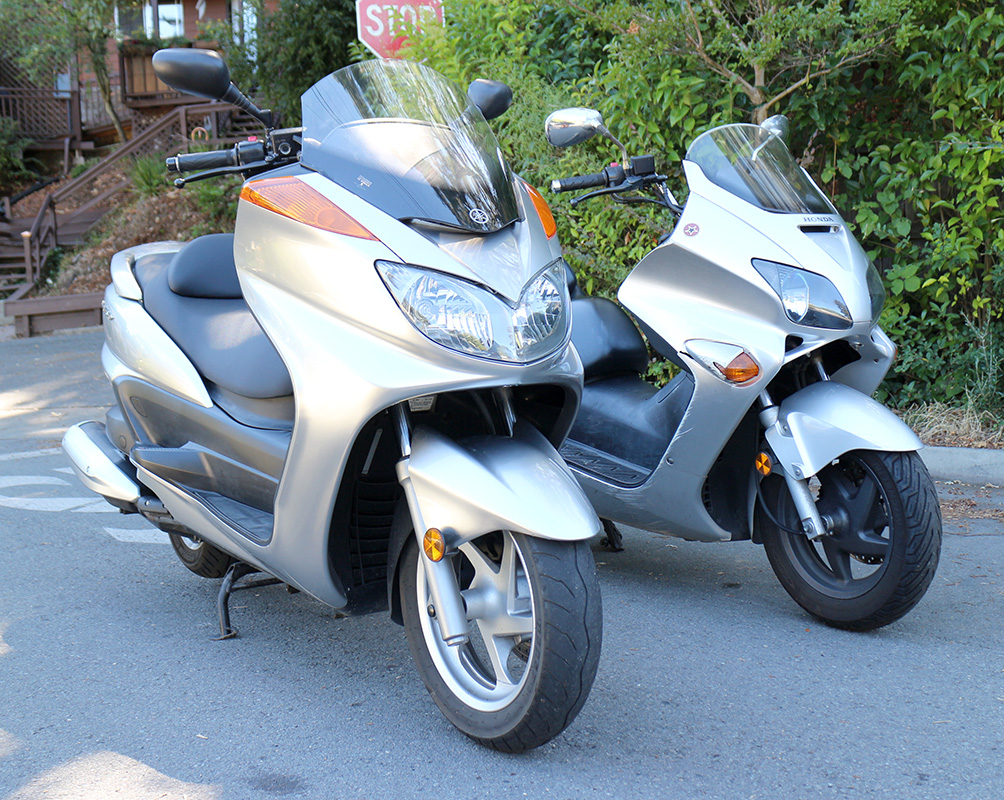 Here’s some observations given the two bikes:

* The increased trunk space is AWESOME! I can carry two helmets now or park with my helmet and gear in the bike. Very cool. The Reflex had half the space.
* The larger engine is nice, especially on the highway, but it’s a bit too much. Again, 300-350cc’s would be better. This also lower the MPG from 75 mpg to 53 mpg
* FI is nice as the bike runs very well. A known issue with the Majesty is the vibration at idle, but once rolling it’s gone.
* The bike is much better constructed and feels much more sturdy as can be seen just by comparing the Reflex’s 33mm fork tubes to the Majesty’s 41mm tubes.
* The Reflex is slightly more comfortable and feels much lighter which is great when weaving through thick traffic.
* The mirrors on the Reflex aren’t just classy and great looking but they work really well. The mirrors on the Majesty look like crap and work only passably. Due to the left hand thread on the right mirror on the Yamaha, they can’t be exchanged. I’m going to try to find some nice Virago mirrors on ebay.
* The Majesty has larger wheels with is very nice, 120/80-14 (front), 150/70-13 (rear) compared to the Reflex’s 110/90-13 (front), 130/70-12 (rear).
* The Majesty’s larger tank is an improvement as I can get far more miles between fills, 3.7 g vs 3.2 g.
* As it’s an FI bike, the computer can do a lot. Thus, the Majesty gets an electronic speedometer rather than a cable driven unit on the wheel like the Reflex.
* I prefer the fold down passenger pegs on the Reflex to the molded in units on the Majesty. I don’t always have a passenger on board so I’d prefer the cleaner tighter lines allowed by the folders.
* The passenger seat back on the Reflex may not look great but it’s an important feature on this kind of machine. The Majesty should have one stock rather than after market. I have to get one.

* One major thing that I love about the Majesty over the Reflex is that the Majesty uses a paper element oil filter while the Reflex uses a simple screen. I hate the screen filters as they do little other than stop big chunks of metal from entering the system. With a paper element, the oil can only have 20 micron or smaller particles. Not incredible, but very good in comparison.

Changes I’ve made to the Majesty:

* The first thing to change was to cut down the absurd wind screen that comes stock. I cut it down to a level slightly larger in area to the Reflex. It looks amazing now and gives me complete visibility while city riding and lane splitting on the highway with only slight sacrifice of wind and weather protection. I’m happy to make this trade.
* I swapped out the stock 37mm (90 degree turn) throttle with a PVD 43mm 60 Degree throttle. I’m used to a very fast throttle on powerful sportbikes. On a 400cc bike, I want to wrench every bit I can out of the engine. This change was transformative.
* I cut some plastic to change the handlebar position, a little higher and forward. The bars have too much sweep which could be improved for real use.

Future modifications:
* A slight modification to the seat pan to give even 1/2″ more space. Scooter ergonomics are designed for Asians and Anglo women and children. Not for full size men. I’ll keep looking into this.
* Passenger seat back (p/n ABA-5RU42-20-00). Yes. Chicks dig ’em.
* BikeMaster American Chrome (Virago type) mirrors.
* The brake levers are way too far away from the bars. I’ll figure out a nice mod to bring them closer. That will improve control and reaction time.
* The gearing of the variator needs some tuning. I’ll be looking into a cheap way to make a difference on this point. I’ve ordered some 13g and 10g rollers (24mmx15mm) to replace the 8x 15g rollers that come stock. There’s plenty of room to increase the revs and gain a lot of acceleration. The motor is really lugging. In stock form, the clutch is engaging and the system is spinning up to 5,500 rpm. Then the rollers begin to push the ramped plates together and into the belt. This load brings the revs down to 5,000 rpm. They then rise along with the bikes land speed and top out around 7,000 of 8,250 rpm (redline). I’m looking to shift those ranges up and get quicker acceleration by using the lighter rollers.
* I’ll set up the suspension and even put in a Race Tech Gold Valve Emulator when I get around to it. This will be nice for charging hard into bumps.

I need to find someone to buy the Reflex as is. It comes with a Honda service manual. I’m open to reasonable offers. Pass this on if you know a good person. Some cash for older folk, but I’d do free to a high school kid that was serious about doing a project getting the bike fixed.