The Light Cycles in the movie TRON have always been an inspiration to me as a cyclist, motorcyclist, and a skateboarder. Who among us hasn’t dreamed of hammering out a few fast laps on one of those things? Such a connection, so ripping! Cycle after cycle. Around and around… just like in a cyclocross race.

Here’s the PVD TRON Light Cycle. Cyclocross Race Bike – Flatbar. I put a bunch of time working out my riding position for this bike and how I wanted it to work. I think that my only regret is doing 420mm rather than 425mm chainstays. 425mm would have given me a bit more tire room for comfortable use of the 42c tire shown rather than the ‘just’ fit condition. That’s not the worst issue as for any tire smaller than 42c there will be no problem. My issue is certainly magnified by the use of Stan’s Arch EX rim in the rear here (Crest up front). The Stan’s rims make the road tires magnify in width. I bet with a standard road/cross rim these tires would be a bit smaller. 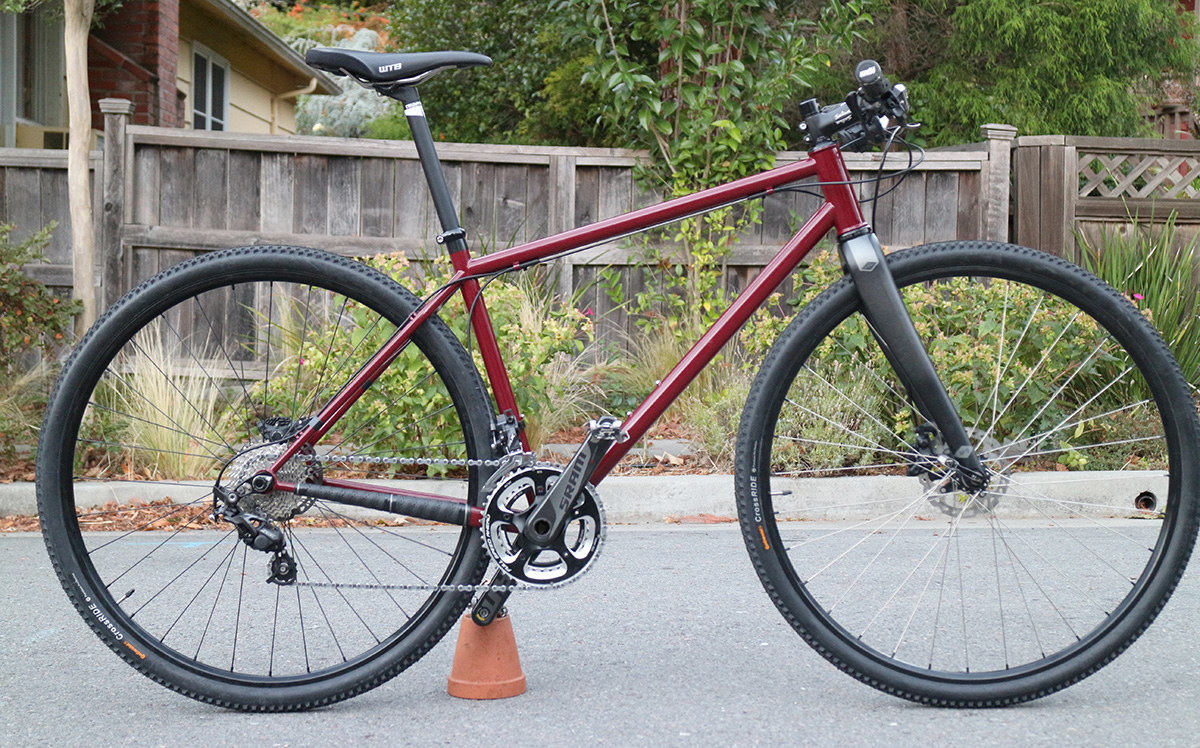 Shifting: The lovely Shimano SLX 10s Dynasys w/ Shadow+ clutch. Short cage rear, 46/34 rings and 12-30 cassette for a good all around bike. I may drop the cassette to an 11-28 as I am stronger than I was last season.

Cranks: Here’s something fancy, SRAM S952 crankset for disc (135/73) road. It’s not possible to put a road crank onto a 73mm shell which should be spec’d on a 135 rear bike. But mountain cranks are too wide for this application. That’s the major reason for this part. I changed the chainring spider to a 110mm 10spd and fastened the FSA rings. This produces clearance for 42c tires due to the 47.5mm chainline and a 150mm Q-factor unobtainable with a mountain crank. These are the only disc road/cross cranks that I know of currently. Gotta have ’em. Another super cool benefit to running these SRAM cranks is that I can simply swap spiders to 130, 120/80 and 104/64 BCD letting me run any chainring combination possible. So if a ride is going to warrant skinny wheels but have cruel levels of climbing, I can slap in a 36/24t ring setup, lower the FD and shorten the chain and I’m done. Super cool.

Fork: I was initially encouraged by the low cost and 15mm TA of the Whiskey No.9 fork (FK5200). TA is the only way to go these days and ENVE doesn’t have one yet. When I got the fork, I was struck by just how horribly ugly and poorly designed it is. It looks like complete garbage ascetically and when putting on my engineer/designer glasses it looks even worse. Then, putting the bike together I found that the cable routing for the fork is nothing short of retarded and slipshod by any measure. I was left to just tape the hose in place on the fork. Yuck. Worse (yup, it gets worse), when riding the fork in the shake down ride on my bike commute to work, I found the fork to be super duper ultra-holy-shit fucking stiff in a horrible, cruel, and bad way. Stiffer than any of my MTB ridged forks could ever be. Yes, even the segmented forks. A proper CX fork should flex a bit. Less than a road fork and more than a mountain fork. We call this passive suspension and it’s really important. This thing barely even moves under the hardest of braking loads on pavement. Was it designed for a 600lb elephant? I don’t get it. I’m pretty let down that something that looks so bad could work even worse. For shame QBP! For shame. If I wanted Surly level garbage, I would have bought from that line. What blows me away is that the Whiskey No.7 disc cross fork looks far more suited flexing properly. Ugh.

After some riding and testing, I’m made a few setup changes to the bike to more narrowly focus it for cross type events.

*Swapped 90x+7 stem for 100x-5 to maximize climbing and power and move weight forward.
*Add 2.5mm spacer under stem.
*Swapped 25mm offset post for 16mm offset. To correct cockpit from stem swap.
*Swapped front tire for 29×1.8″ to provide some comfort and traction to make up for the super stiff fork.
*Swapped Rear tire for 700x40c to give a bit more mud clearance and reduce weight.
*Changed gearing from 46/34-12/30 to 42/32-11/27. This may be a little narrow, but if it works it’s going to be really nice and tight.

Here are some posts that involve this bike:

Some of the photos show the bike with 700x28c Continental Gatorskins. Something fun for shaking the bike down on the streets. Amazing how huge they look on the Stan’s Arch EX rim.