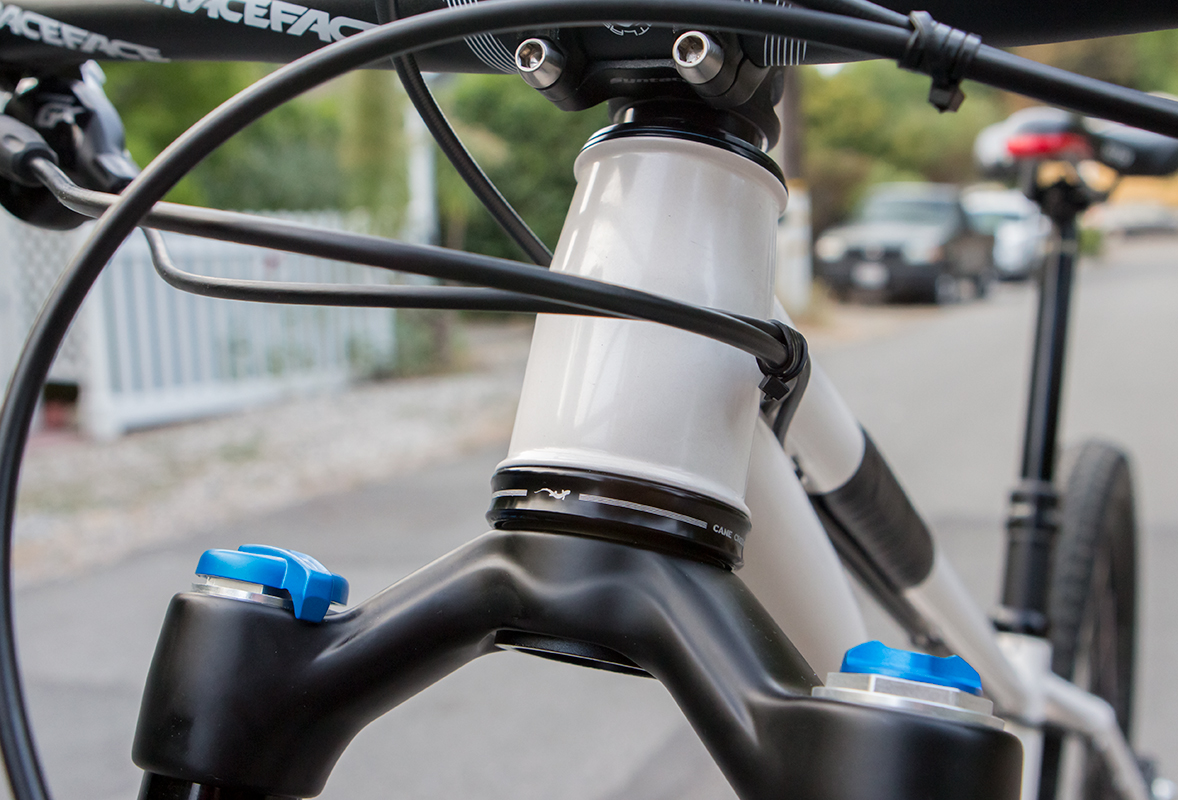 It’s been a long long time since I built a bike frame for a girlfriend….

Obviously, Pink Five was the only name a girls bike could take following RedFive. You can see the whole Pink Five saga HERE. (or on Amazon HERE)

Windy is an excellent rider. She’s strong. She can ride all day. The myth among her friends for the past 10 years or so is that she would be buying a new mountain bike soon. She kept saying this for years from what I understand. Otherwise, she’s been riding an antique bike around the trails. Then she started riding with me and her rides changed considerably. She has a lot of potential. Her strength is her strength and that helps her learn. She has to figure out some more about riding technical trail riding still. Hopefully this new bike will help. 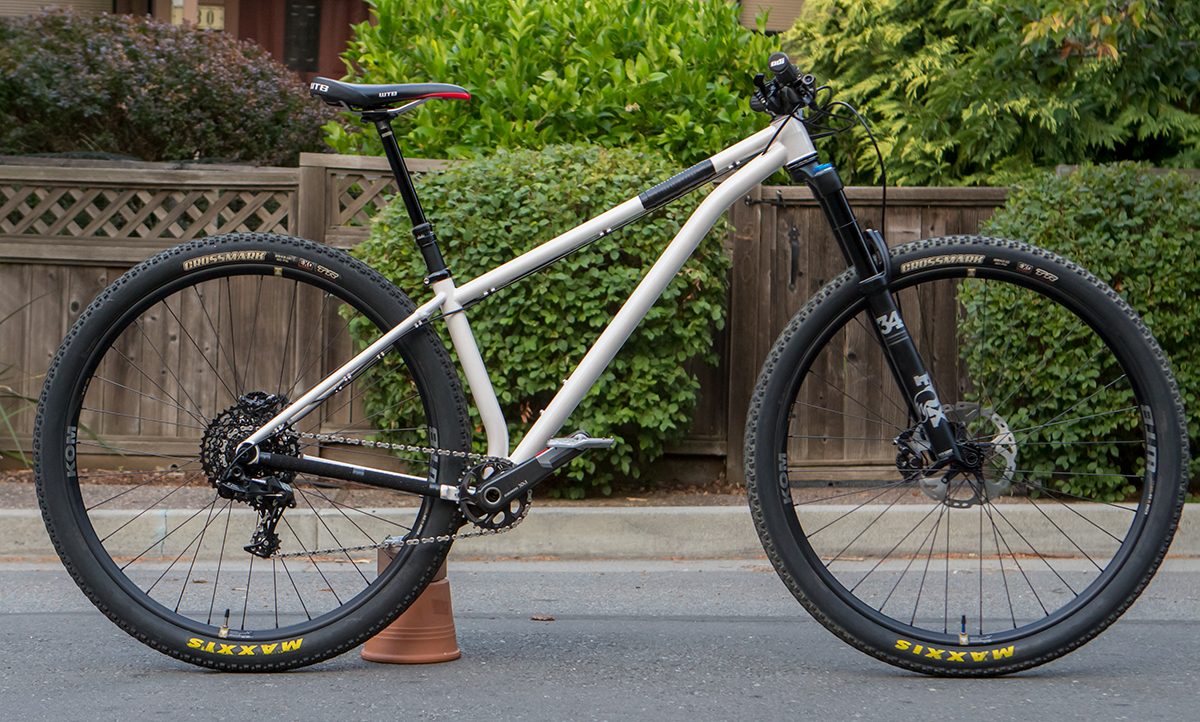 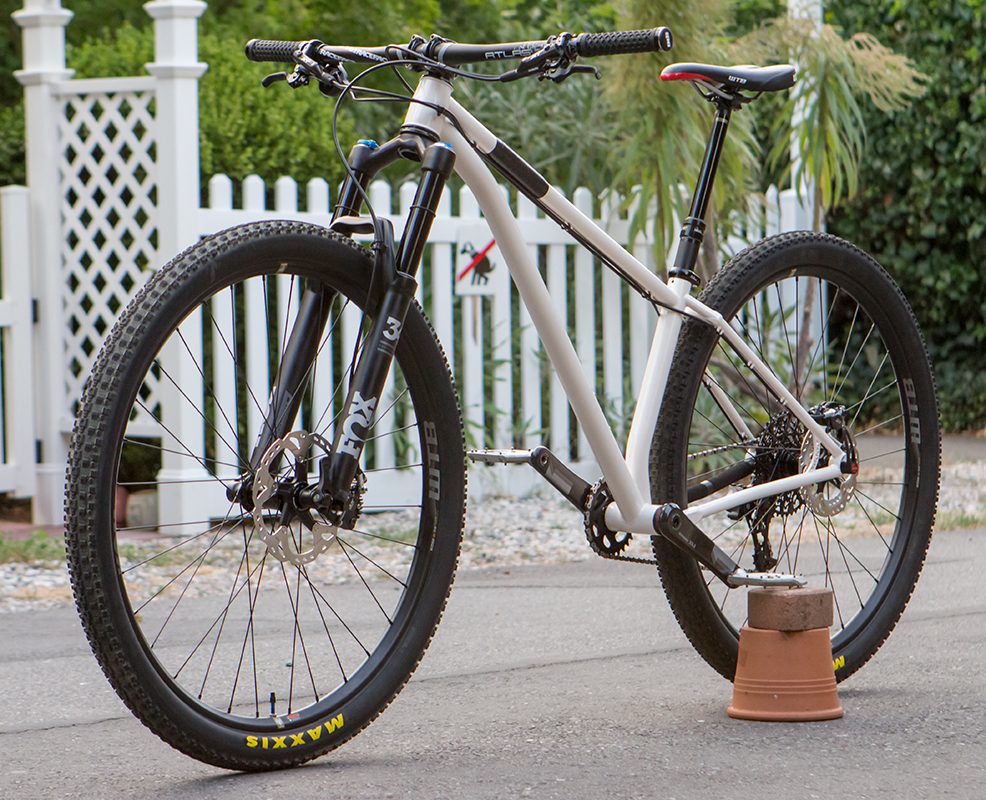 This is a frame designed for a 5’6″ woman. If you look close at the numbers, you’ll see that it’s a whole different kind of bike. It’s long. Very long. The saddle is forward and the cockpit moves forward to match. This give a much better balance on the bike for improved handling in almost every situation. Pedaling is very nice as the rider is right over the cranks. The drawback? More weight is supported by the arms in transit and decent. Those with very weak upper bodies may have trouble with this but hardcore athletes shouldn’t have any issue. This is a very aggressive setup designed for maximum performance rather than leisure touring.

I’ve been putting a lot of work into my design, parts and tooling in this recent frame building bender. A host of changes were made from RedFive to PinkFive:

The parts used in this build are of a pretty sensible spec. Money was spent where it made a difference, not where it didn’t.

Short & narrow cranks. Sram XX1 Q156 x 170mm cranks. I wish there were a cheaper way of getting a crank of this spec but there isn’t. A shame. One day SRAM needs to make an alloy Q156!

A 170mm RS Reverb Stealth B1 dropper for a shorter rider. With a saddle height of 715mm (710 with 175mm cranks), there are very few bikes currently made that would allow this without having to run a tiny frame size. The hydraulic disconnect is removed on these smaller frames to allow some room of seat height adjustment without putting the system at risk and giving more space.

NX rear derailure. I love disposable rear derailleurs. Fuck ’em. Break them off, slap a new one on, try again faster and harder! Hopefully this one will work well and become my new standard. Sadly, the other Sram NX parts are useless. GX is killer and is used for cassette and shifter.

Large range 1x drivetrains require a high engagement rear hub. The Industry Nine Centerloc units here has 120 points to work with. This will make the drivetrain nice and responsive.

The powdercoat is Prismatic Powder PMB-4724 Diamond Pink. This pink is so close to white that it can fool you. In fact, some of my photos make it look more pink than it does in real life. Strange stuff. Windy chose the color. It didn’t even have to be a pink bike, Pink Five is just it’s name. 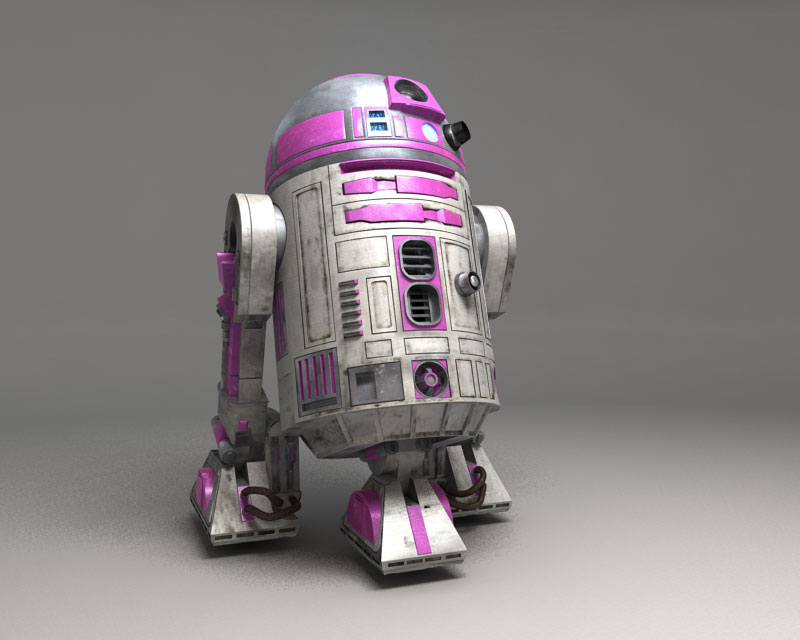