A long time ago…2014…I did a skateboard project, the Skinny Little Bitch. It was an interesting idea of a board but it really didn’t work out. It was no fun to ride.

The board was too tall. The wheels were small. The trucks geometry was off because of the height and with reduced leverage from the width it was scary to steer. I had also moved the rear truck too far back toward the tail.

I moved on to another skateboard (which has also seen recent revisions) and the SLB just kicked around. Project purgatory.

I was looking into revisiting the child’s skateboard. Put it together in a more refined way. A better deck, trucks, and wheels. I was looking at the SLB and thinking that I’d harvest the bearings…then I looked to the deck. I might as well cut it down for the kids board. It was time for the SLB to die.

I took some time to think about the SLB with fresh eyes. Since 2014, I’ve been doing some different stuff. I moved away from high steer to low riding. The wheel wells have allowed some really big wheels to be used even with the low setups. On the child board, I recessed the baseplate and started thinking about roller skate wheels. There was so much that could be incorporated into the SLB before I gave up on it.

Recessing the baseplate was the big gamble. Worried that it would just be too much and ruin the deck. I’m a gambler and I went for it. 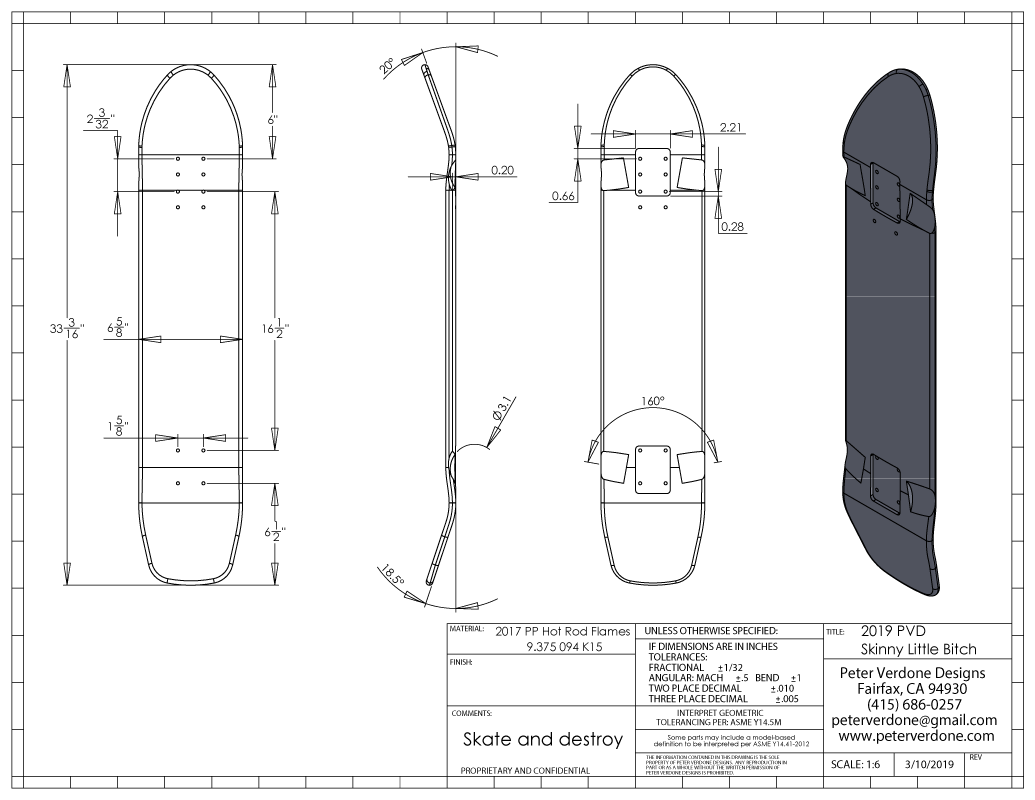 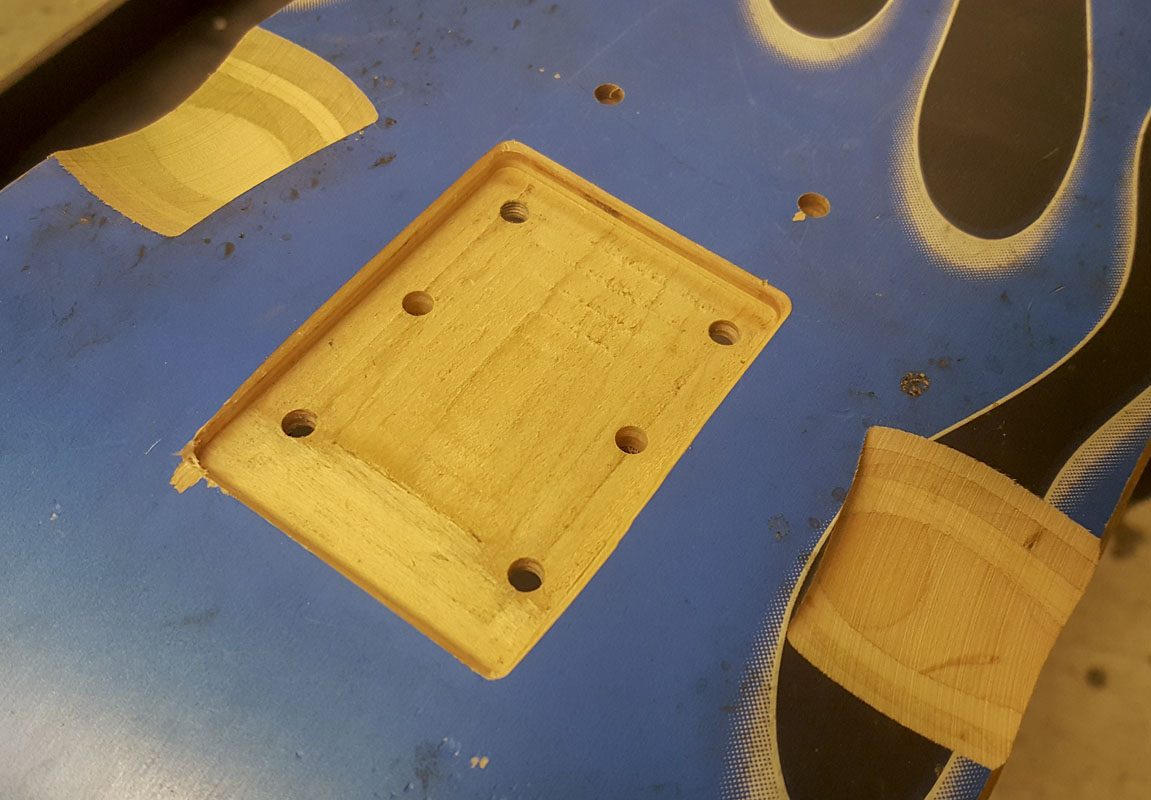 I set them up on some new Ace 00, 98.5mm width trucks. They’re designed way too tall for some reason but recessing the baseplate helped that.

Then I knew where to cut the wheel wells.

I ended up being able to squeeze on some taller wheels, Riedell Radar Energy 65, 78A 35mm x 65mm quad skate wheels. I wish that they were 32mm wide like the smaller diameter wheel. They do roll so much nicer with the larger diameter.

Really, it would be nice to find some 66mm diameter wheels, 34mm wide, 0.300″ bearing spacing, 82-85A, and have them reversable. That’s my current dream wheel. They would be nice and light and roll really well. 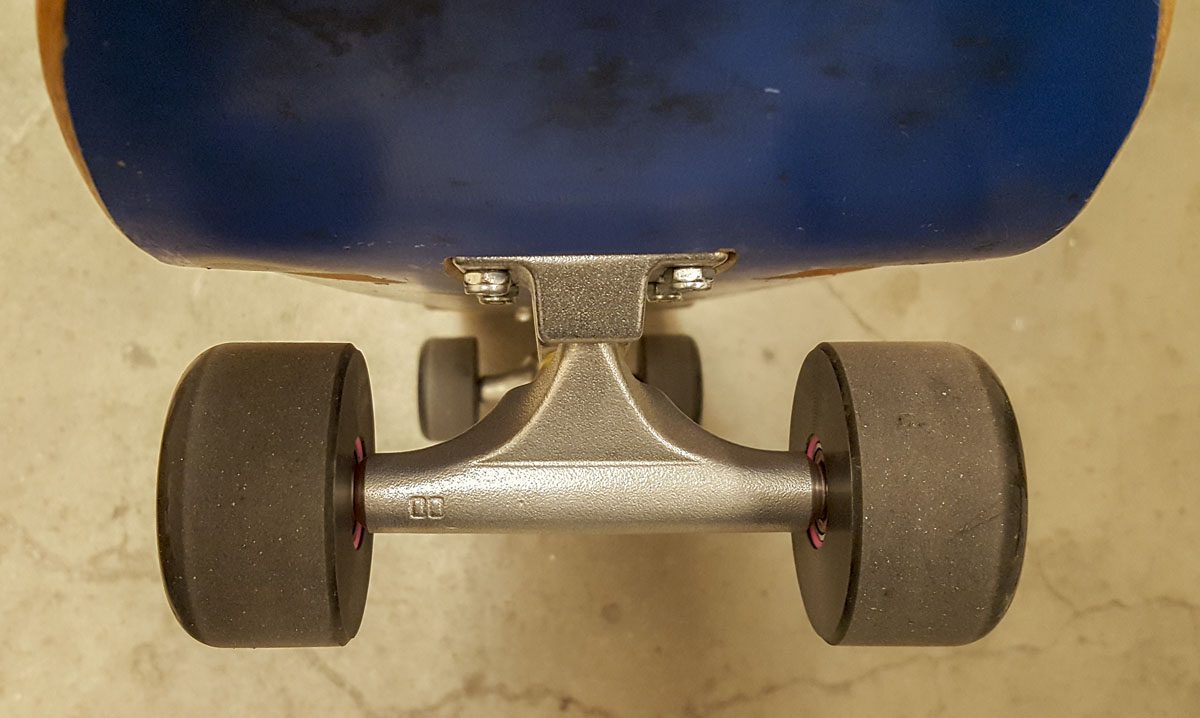 The skateboard now rides considerably better than it did originally. It rolls faster and smoother. It turns nicer and feels very planted. I’m glad I did the work on it. I’m going to continue to look for better wheels for it.

The SLB is an extreme longboard. It’s intended to be super light and compact while still covering ground well. I believe that the running gear seen here mounted as I do to a 6 5/8″ deck with a 14″ wheelbase would be a pretty cool compact board for a kid that needs to use lockers and carry a bit. It would be nice to see this applied in this sense as I believe it’s where the 6 5/8″ is maximized.