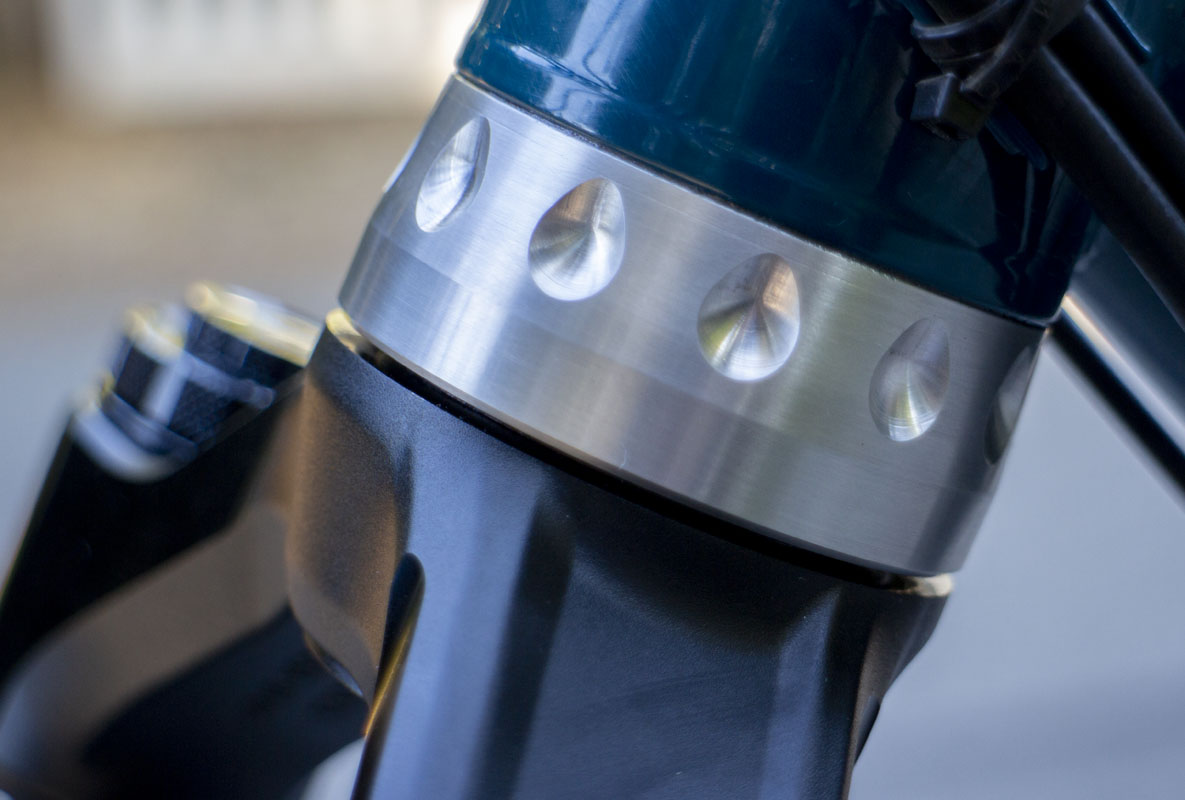 Testing is ruthless business. It requires radical intellectual honesty. Huge investments of time, effort, and money were put into getting something on the ground to test. Nobody wants any of that to be proven to be a waste. But it doesn’t help me in any way to lie and pretend to myself when confronted with the truth. I NEED to know what is going wrong and what is going right. Without that, nothing can change in the right direction. Next time. 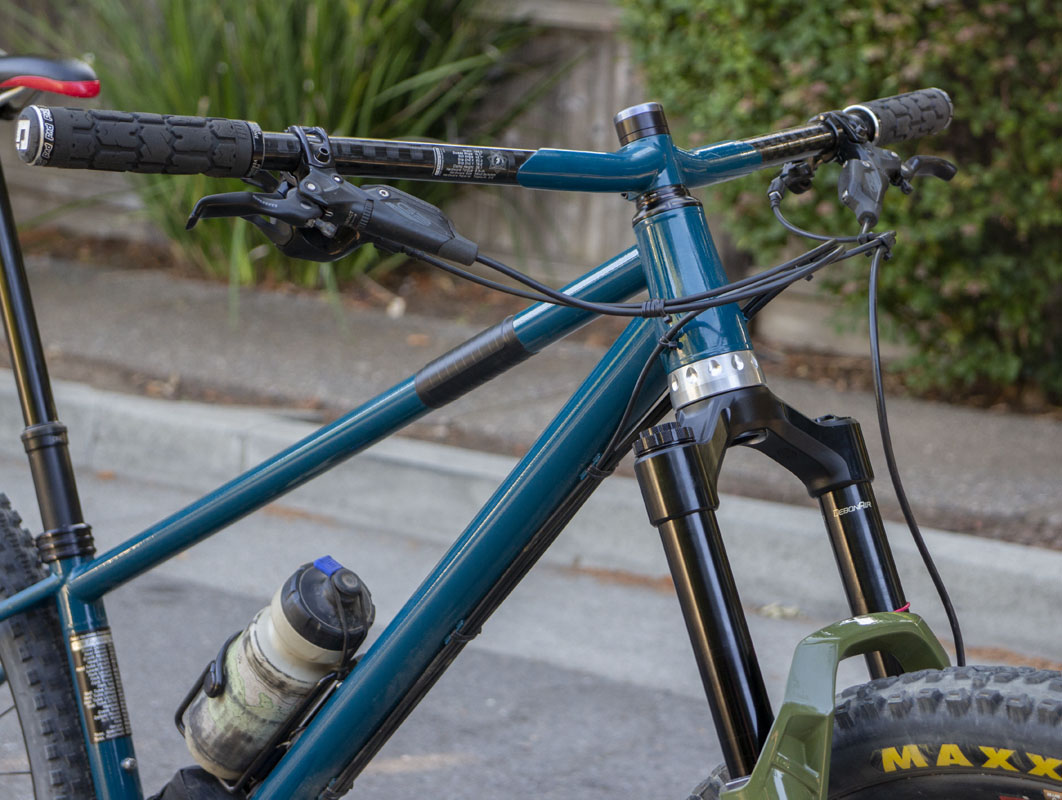 So, I was test riding the new F-16 Fighting Falcon this past weekend. Everything is going well and the bike is on track. Some small details are being looked at. Still trying to determine a few things.

I’m having one big problem though. The fork is wrong. We knew that. I had wanted a 160mm travel and lighter fork for a reason. I was going to settle on a 150mm fork as an early order got that in front of me and parts are very hard to come by for changes. The 180mm fork belongs on another bike.

To be clear, the geometry that I defined for the bike was doing everything as predicted. The only parameter that I was finding issue with was the travel allotted and the fork itself.

Two reasons for this are obvious when testing the bike:

While finishing the project up, I didn’t have any bandwidth left to work on this problem. Some projects get so drawn out and have already spidered out of control that they just need to wrap up. Now, after testing has started, I have some bandwidth available again and a real reason to get back at it since I’m really riding the bike.

There is a way to make head changes if using common pressed in headset parts. I’ve done this several times and for several reasons for over a decade.

So, it would be a simple fix, but the IS52 interface that is on the Falcon isn’t designed for a pressed in adapter. I haven’t seen or done a modification on this interface before. Still,  the 52.1 ream in the PMW IS41/IS52 head tube could give just enough purchase, precision, and support for such a thing. I did the math and modeling. I was going to try it.

This is one of the reasons why I don’t like the IS (Integrated Standard) head system. It’s inflexible. It’s definitely a terrible interface for consumers working with antiquated production bikes that need real tuning modifications. I put off going back to it only after I had done most of my geometry experimentation over the last 10 years or so. I’m pretty sorted in what I’m doing now and can hit my targets pretty well.. if I set my fixtures properly. Ha!

Also, the stupid bicycle industry killed the EC49 interface. Why? Simple stupidity. This is an excellent interface for steel and titanium builders but it had three big issues:

What the EC49 did was allow considerable geometry adjustment flexibility to the user. Additional lower stack heights and angle adjustment headsets were easy with it. With IS41/IS52, none of that is possible (until now)

But looking at what I had in front of me, I thought there might be a way. The PMW headtube actually has some meat in the area. The IS52 reamer cleans the bore wall predictably even though it isn’t used mechanically in the operational design. I just had 7.5mm of insertion as a limit. It looks hopeful but close. 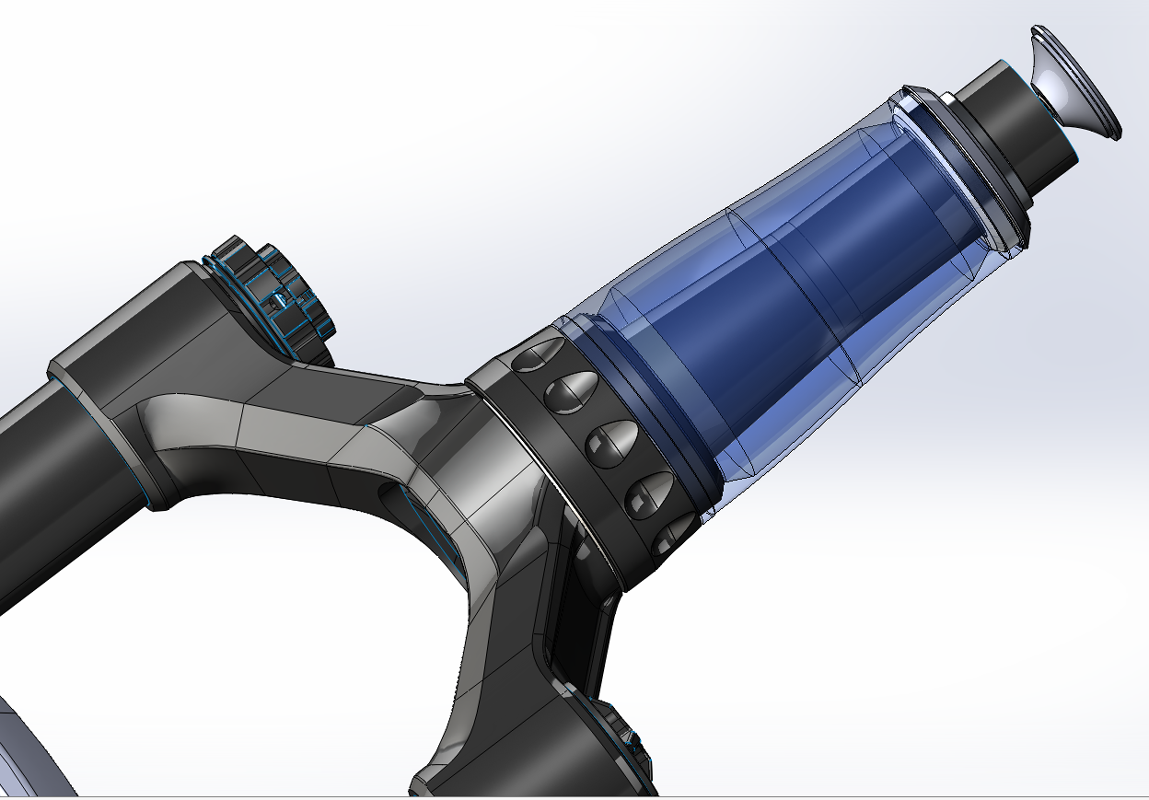 A quick machining job on the lathe brought a part to reality. I removed the dimensions in the print shown that I don’t want you to know. This is just a prototype so I’m waiting for a bit to finalize the part. 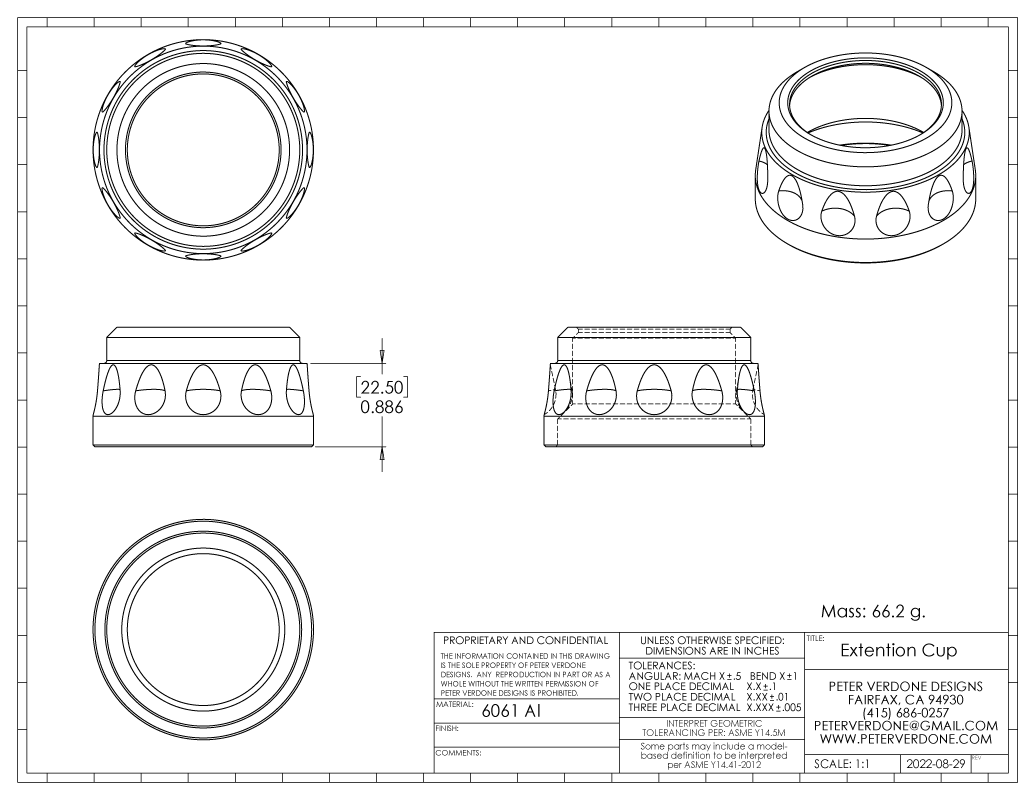 I do like that this part makes a better transition at the fork crown. It is designed for a much larger head tube than the steel tube I use. The RockShox forks are looking to blend into a 59.5mm tube. The PMW is just about 56mm. A slight flair gets rid of the unsightly step. 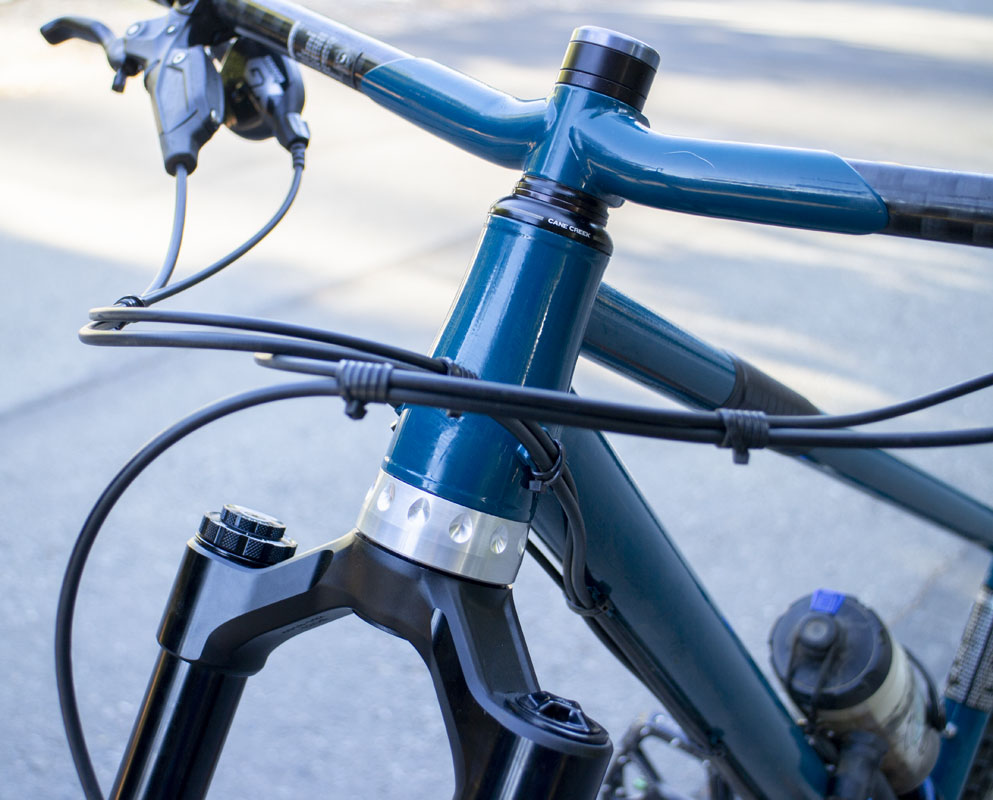 Rumor is that a simple travel adjust part exists for these forks (11.4018.111.026) but documentation is scant. Otherwise, the full kit is required. 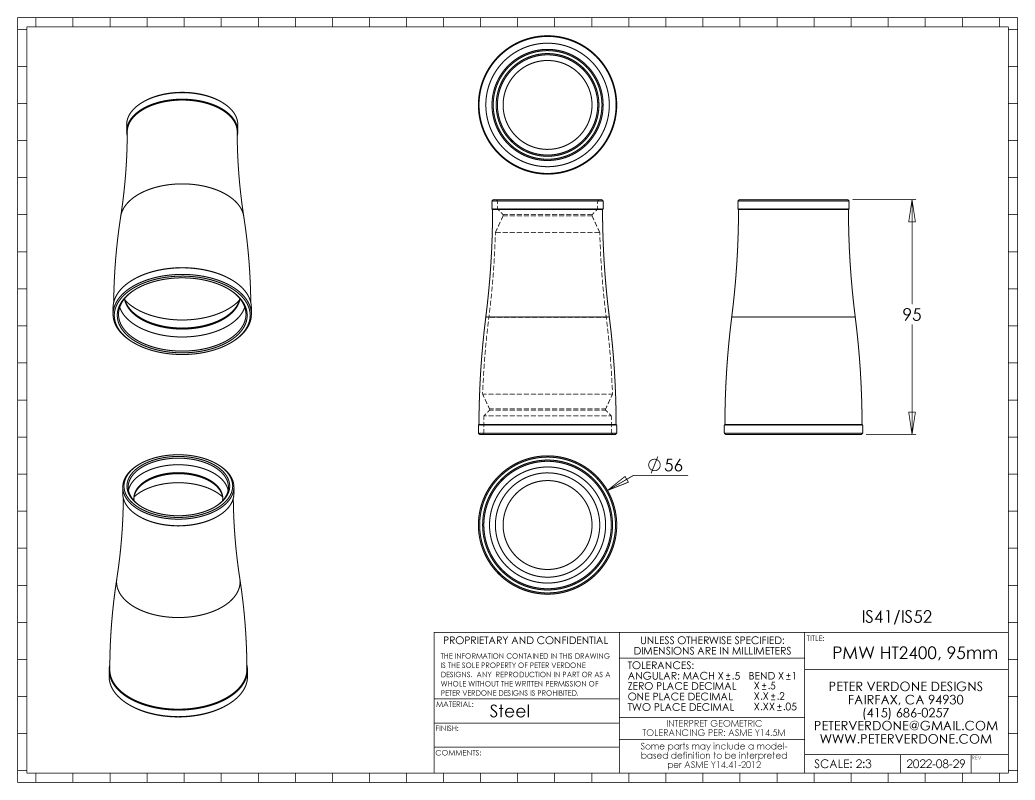 If this works out, I may re-frame how I design the head tube heights for my bikes that use suspension forks. Basically, plan for the ability to use several different travel forks from the outset.

If I build a bike for the longer travel version of a given chassis size, I can always option for using smaller travel with 14mm to 21mm extensions. This as within a 30% sag scheme, a 10mm change in travel moves the head tube 7mm. At 25% sag, it’s 7.5mm. Thus, a 160mm travel bike can be reduced to 140mm without any knock on change in geometry. A 190mm travel bike can be used at 170mm or 160mm. There are always going to be places and times for this. Planning for it ahead of time is the trick. 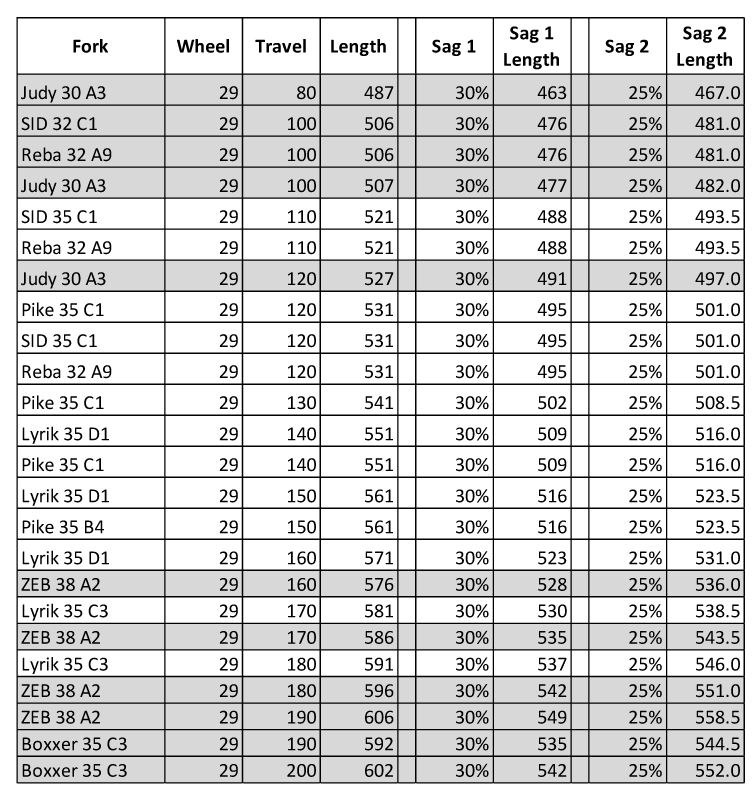 The outliers in this matrix are the ZEB forks which are 5mm longer for a given travel, and the SID 32mm which is 5mm shorter. Still, the Lyrik/Pike system works and they are most common. 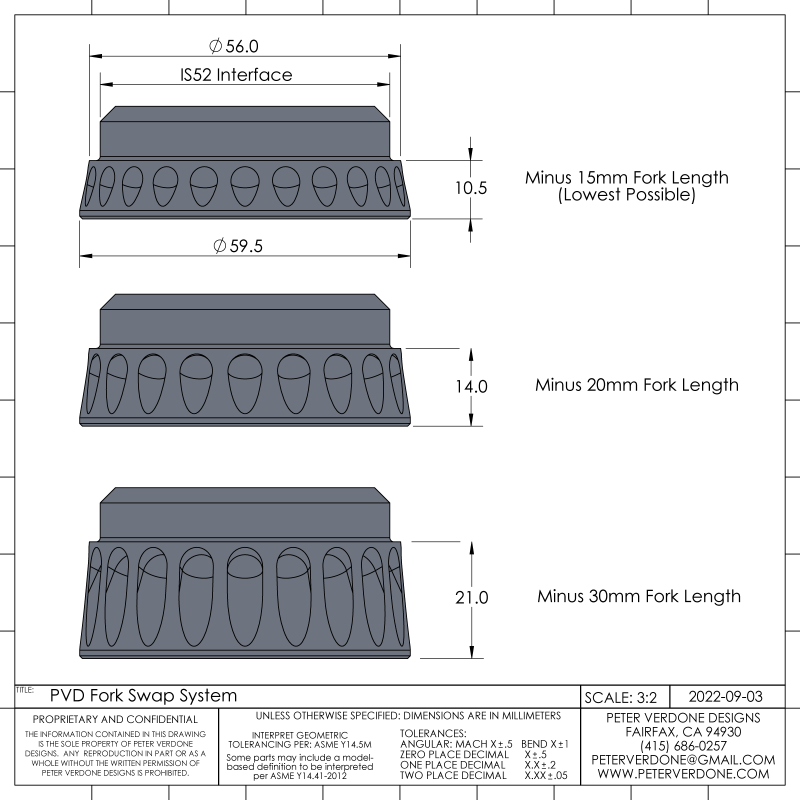 A small 10mm fork travel change is a little tight given the shape of the head tube skirt. It’s also a very fine change that could be questioned. I expect that this won’t be possible. So I’ve drawn a 15mm cup in it’s place.

Now, I just need to ride with this part and see what happens. More testing. The bar gets raised again. 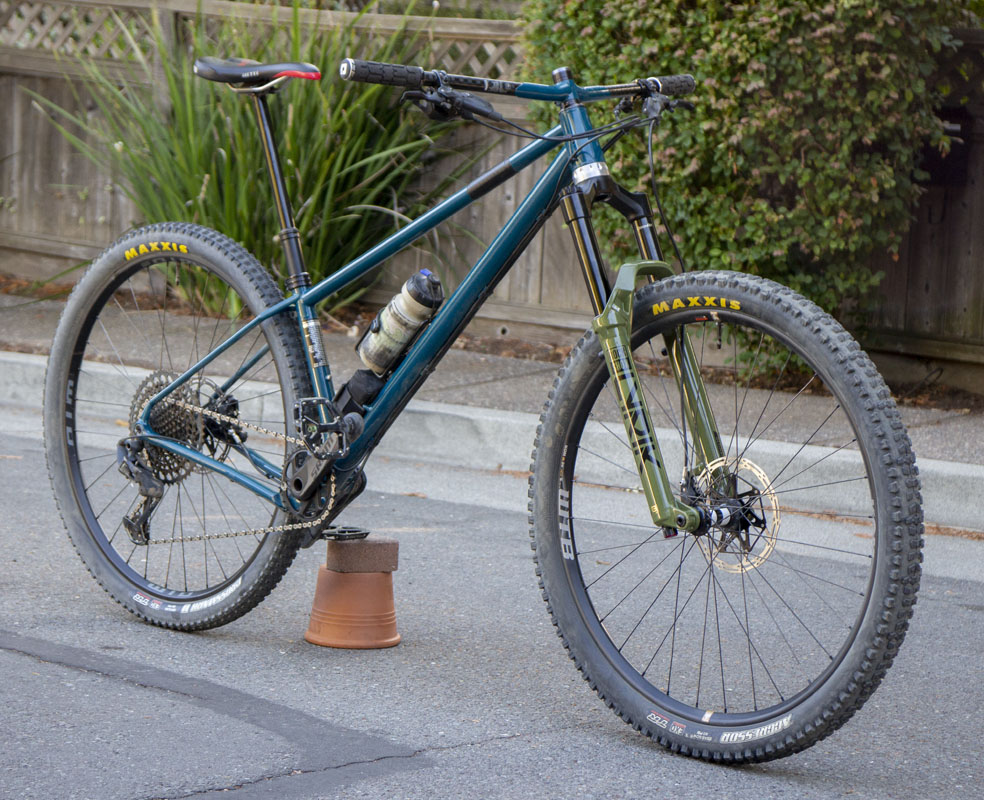 2022-08-31 – Test ride– Double rancho to Hobo. Baseline test. The geometry feels spot on. Everything as predicted, just some subtle fork tuning needed. Started with 75 psi and 1.5 tokens. Will move to 75 psi and 1.3 tokens. I want to take just a tiny bit of progressivity out.

The smaller and lighter fork do feel nice with the bike. It’s more of what I had initially intended. The 2023 Lyrik is utterly amazing feeling. There’s been a lot of hype surrounding these new forks and it’s not just BS. They really do feel special, I’m figuring that the butter cups and the longer bushings are the cause. The air bleed valves seem like a joke. Still trying to see if they have any value. 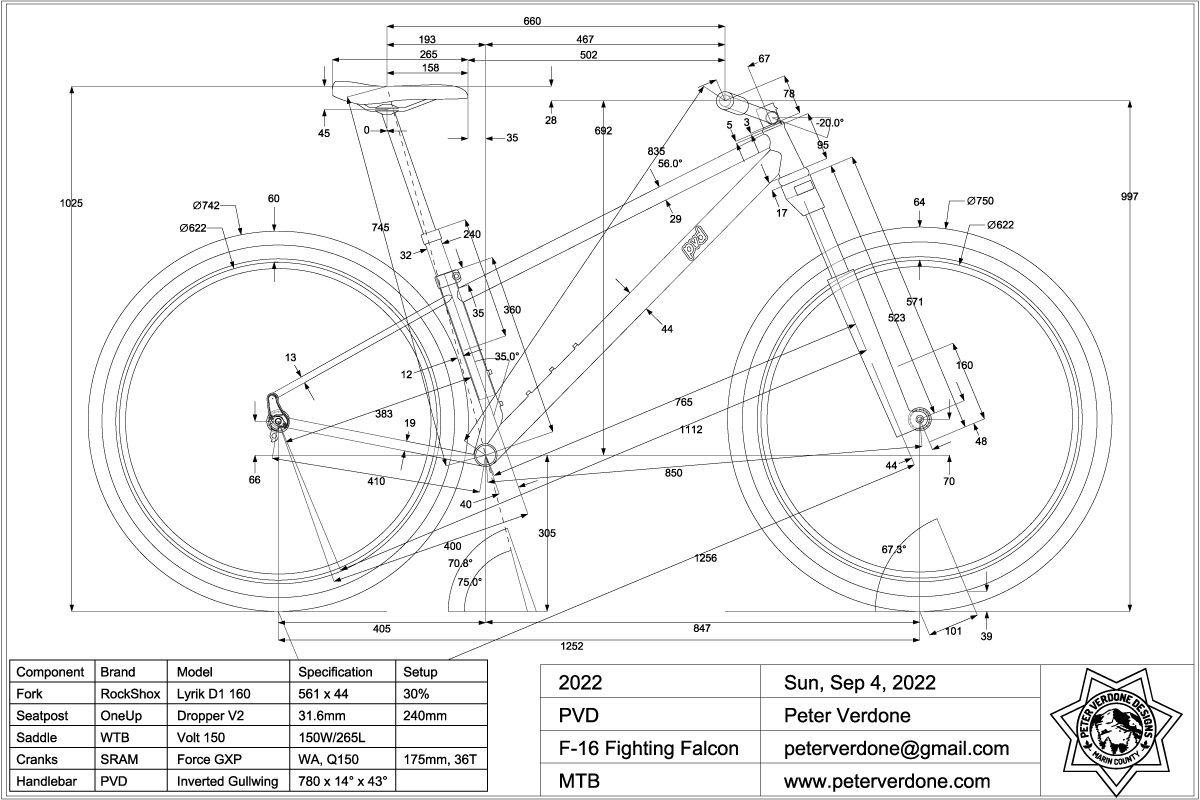