While putting my new 2016 Scott Genius LT together, I learned about yet another industry ‘standard’. The ZS55. Not 56, 55. WTF? The headset on this frame is ZS44/28.6 top and ZS55/40 bottom. ZS55 is a rather rare size. There seems to be no good reason for this divergence. This is referred to as European Standard. Rather than a 56mm lower cup like the overwhelming majority of the industry is currently using they use 55mm. No good reason. Just to make life hard. Ugh.

I was trying to install one of my Cane Creek Anglesets into the bike. The bike comes with an angle adjust headset stock, but there are no options and I was looking for more. Also, this summer I plan on using a straight steerer Boxxer fork on the bike and I need to have something that is systematized. I have a lot of parts for Cane Creek Angleset that I can’t use as the bike sits. In fact, Cane Creek lists no EC55 or ZS55 parts. I did find some Cane Creek 40 ZS55/40 Bottom Headset Black (#BAA0737K) separate from their site. In fact, outside of this part and Syncros the only aftermarket headset I can find in ZS55 is from Ritchey. This does little to help. Ugh. This fucking sucks for no good reason.

Since there was not enough material on a 56mm cup to turn it down to 55mm (not safe IMO), I did the next best thing, I made an adapter from 49mm (OnePointFive) to 55mm. It’s a cute little part, solves the problem, and only adds 1mm of lower stack height.

It’s really nice that the Genius LT came with an angle adjustable headset but it’s a pretty mild adjustment compared to what the Cane Creek unit can do. To get that kind of adjustment we have problems. 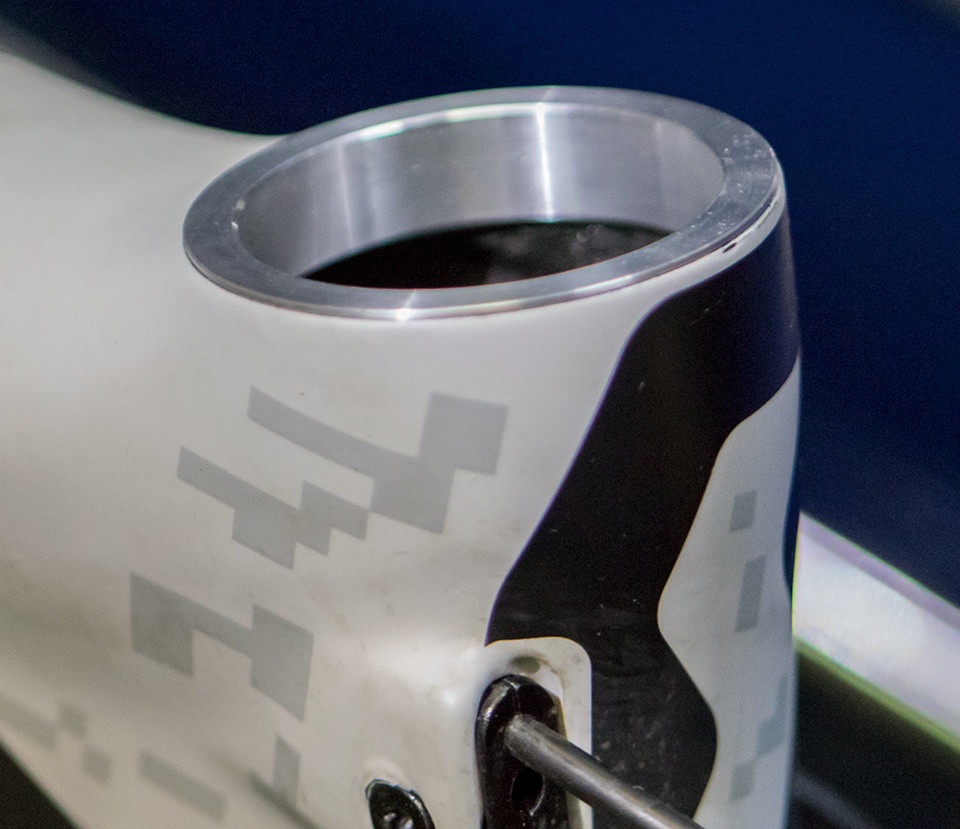 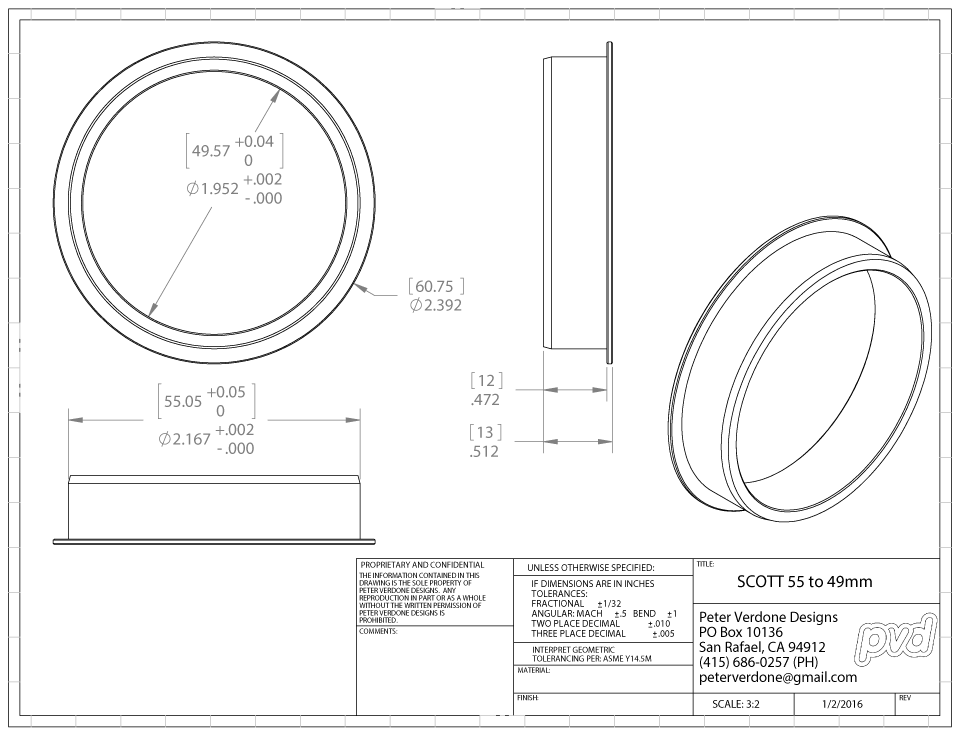 The bike didn’t change as much as I thought going from a headset labeled -0.7 degrees to -1.5 degrees. The front center of the bike only increased about 5mm. The geometries of the headsets are very different and the Cane Creek unit has a much bigger stack height. 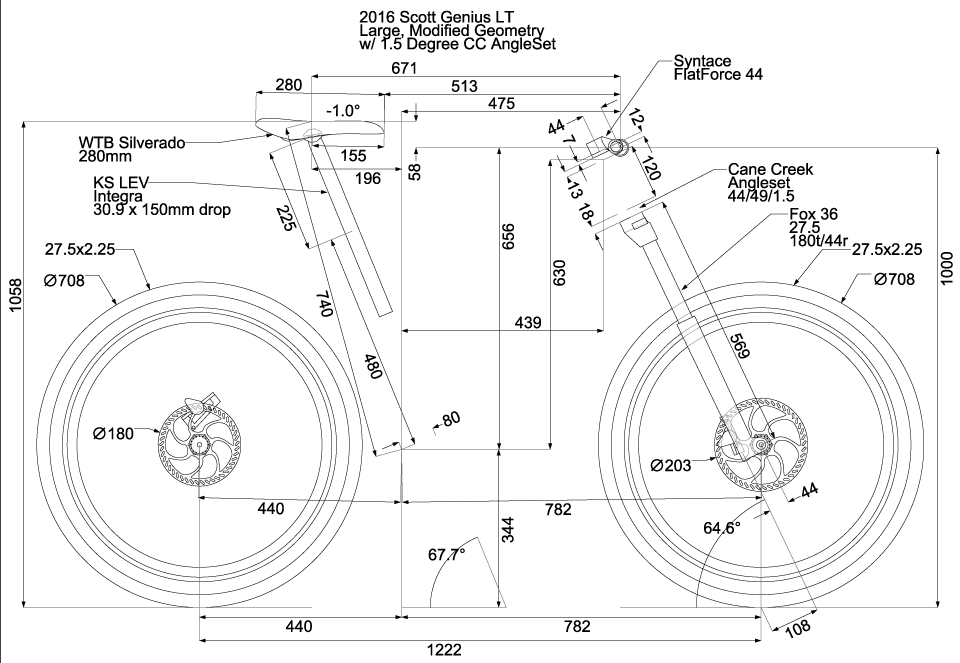 It occured to me this morning (1/3/2016) that I really missed an opportunity with this design. I made the common engineering mistake of assumed symmetry. I could have cut the 49mm bore with a 2mm offset. That’s a large change for this kind of piece. I now have something to work on next week while it rains. That should make this bike as long as it is capable of being. 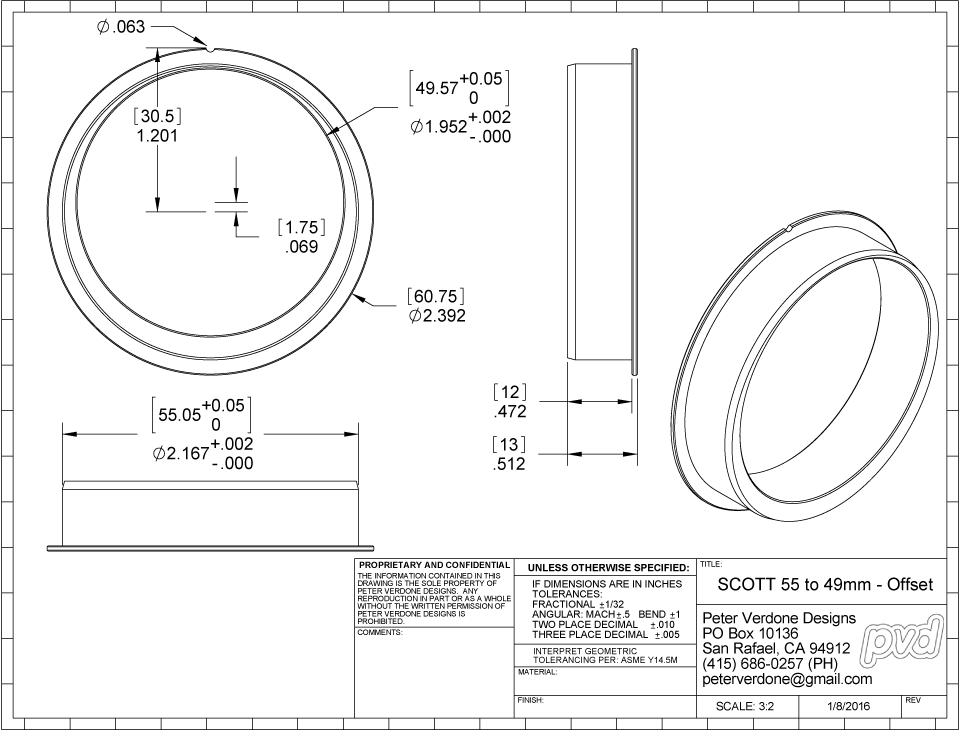