This is another topic that Chris Porter has been talking about for a bit. HERE is an article from BikeRadar with him. There are many questionable and confused statements made in the article but it is noteworthy that Chris has been looking into the topic. It’s too bad that this stuff gets put out there without informed investigation. I blame “journalists”.

I think that the high trail MTB concept is really a marketing device that claims to solve a problem to sell more product. It allows the use of shorter stems and keep wheelbase dimensions smaller. The marketing folks can show less scary wheelbase numbers for the roadies and the old but keep the ‘kewl’ looking stem. As we all know, this kind of thinking is at the heart of the bicycle industry and sales keep it going. Outside of this, it’s really hard to justify.

Remember when Trek and RockShox fucked up the first round of 29er chassis forks with a 39mm offset instead of a 51mm offset? It seems everyone has forgotten. More than a few people at both companies didn’t know about bike design and screwed up bad and they were stuck with lame molds. Fox later just copied what others were doing. We were stuck with these things for almost 10 years. Did anyone say it was better? No. Did anyone really notice? No. Trail has been growing astronomically for years and nobody has noticed until now that the marketing department got on it.

If we are to believe that the move is being made for a reason other than marketing, the goal is then for even more stable straight line bikes on smooth surfaces. Turnkey confidence for the average rider to gain confidence on gentle flowing trail, this due to the greater castor effect of the system. Simple enough.

In the details, some questions arise. since the ground has a greater lever on the handlebars from this increase of trail, this will work against the rider when rocks and roots enter the picture. Just like wider handlebars help the rider manhandle the wheel, that long trail lever will help the rocks take over also. This is when the trail lever is working just as that, a lever. Is this enough to be a problem overall? I don’t know. I’m going to have to try.

There will also be increased flopping forces as the bike leans over in corners making for more understeer. The top of the wheel swing is in the range of 4mm (10%) higher than with low trail. 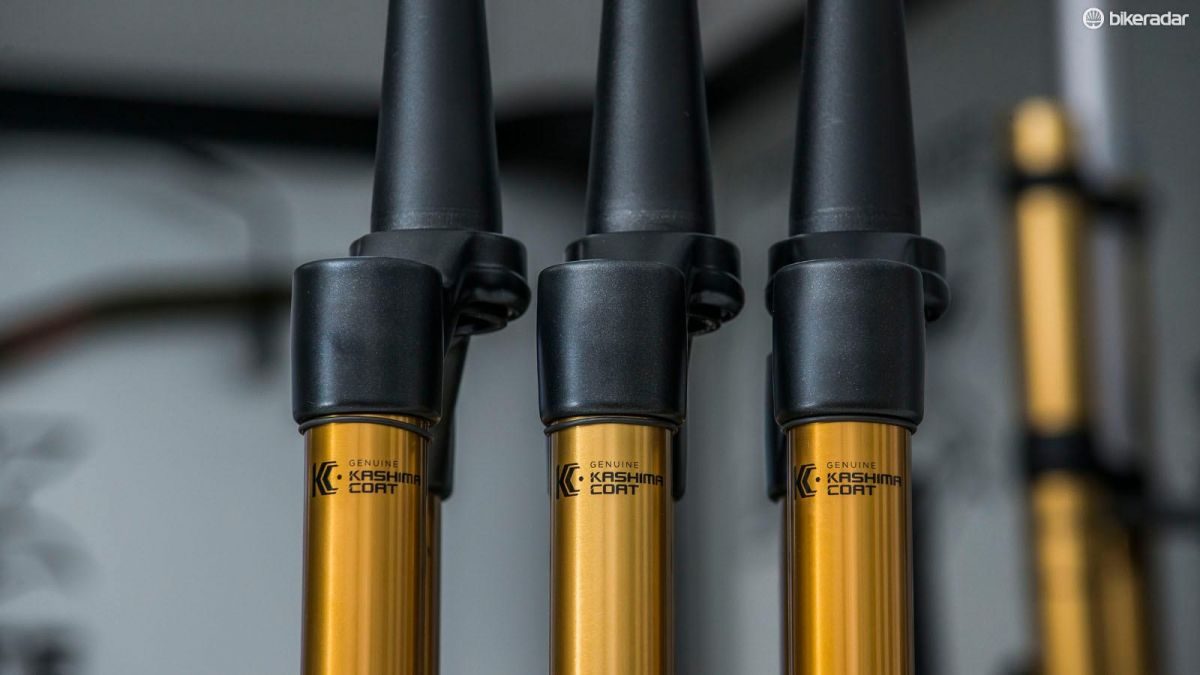 I do think is that it probably doesn’t matter much with regard to steering. Over the years, I’ve basically ignored trail when designing mountain bikes. Twenty-nine inch suspension forks were available with 51mm offset so I bought those. It moved the front wheel as far forward as I could get. The old idea for the fork manufacturers was that the trail would remain constant with different wheels sizes at a given head angle and 51mm on a 29er would resolve to a similar trail like 39mm on a 26er. Simple. Over the years, forks got beefier, head angles got slacker, and bikes got longer. Trail was the parameter that I couldn’t change while buying market forks and other parameters were making the most difference in performance even while trail would end up growing to 133% of what they were (while front centers are about 125% of what they were). Those are very large changes in trail. Nobody really noticed but it could have been that we have been reaping a reward while not even knowing…or that it doesn’t matter much. Changing to a 42mm offset on a 29er increases the trail by about 9%, a significant amount but nothing like what we’ve seen in the last 10-15 years. 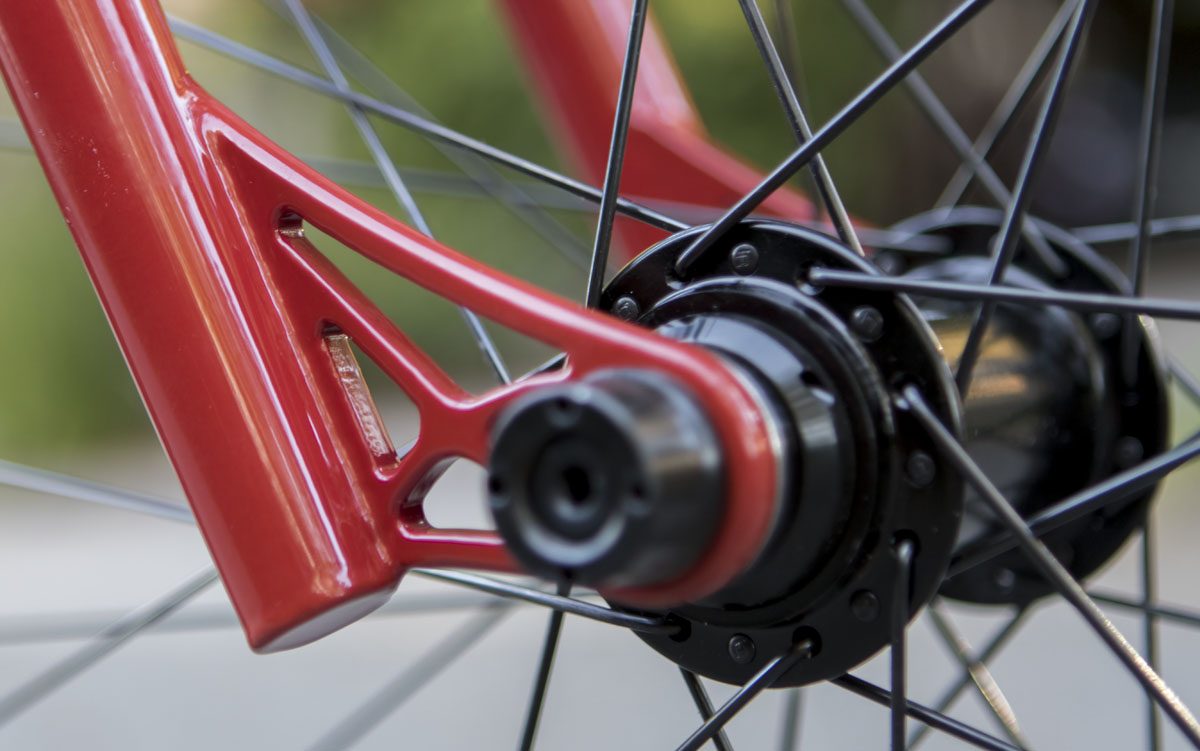 Here’s the deeper problem with high trail MTB, IT MAKES BIKES FIT WORSE. Looking at the examples below, keeping front center (or wheelbase) fixed, the ‘reach’ of the frame grows inversely proportional to the change in offset. Reduce the offset and the reach is extended. Since a well fit mountain bike (for most normal sized people and shorter) is using the shortest stem possible with as forward a cockpit as manageable to maximize front center, reducing the offset means a corresponding decrease in front center. Thus, high trail MTB runs entirely contrary to where modern geometry is going. To explore this more, let’s say you think that I’m wrong; that front centers don’t need to be maximized. Ok. So we look at a bike with a shorter front center and match that on both offset options, the bike with the low trail has more (10mm) cockpit adjustment rearward. That’s a huge value for setting the bike up for shuttle runs or downhill days. If you think that 9% more trail is more useful than a 10mm shorter stem when sessioning gravity, you’re drunk. Having a bike with value in a variety of settings is a real value to most people.

Putting it this way, it is far more important to me that I’m on the longest front center bike that my body and head angle will allow than than worrying about whether my trail is 9% greater, if that really means anything. Will I try it? Sure. Do I think it’s a gamechanger? No.

Beware of thinking that head angle has an infinite range of adjustment. You can’t just slack out a head angle and not pay a high price. As angle slackens stantion bind increases, slowing the fork action. It is even worse if the fork is light weight or the rider is heavy. The fork will function horribly and stick with vertical inputs. This isn’t a worry for a strict DH gravity bike that will only be pointed down, resolving the forces better, but it is a problem for trail and XC bikes that will traverse and climb. I think that many bikes are going too far with head angle because of poor engineering with the rest of the geometry. A bad designer will make this mistake when there are other ways of solving speed problems in the trialbike and XC bike spectrum.

As chassis designers, we don’t refer to ground trail as it is meaningless. We look at mechanical trail. That’s a real lever in the system. Here’s an example I produced back in the mid-2000’s

Here are some graphic calculations showing the geometries that we are talking about with these changes.

Here are couple prints based on my Concorde bike with a 51mm offset fork as I designed it and also as it would be designed with a 42mm fork. Note that the wheelbase and other dimensions remain the same so as to compare the changes of just the fork offset variable. I show the bike with 0%, 30%, and 100% sag to show changes in the topped out to catastrophic state.  Note that in the catastrophic state the wheelbase and head angle is identical on both configurations.

As you would expect, the flop displacement is a bit larger on the high trail bike. An increase from 40.9 to 44.5 (108.8%). Is this a good thing. I don’t think so. It probably translates into a hell of a fast crash when the crash comes. It is probably what will be most noticeable when sitting on the bike.