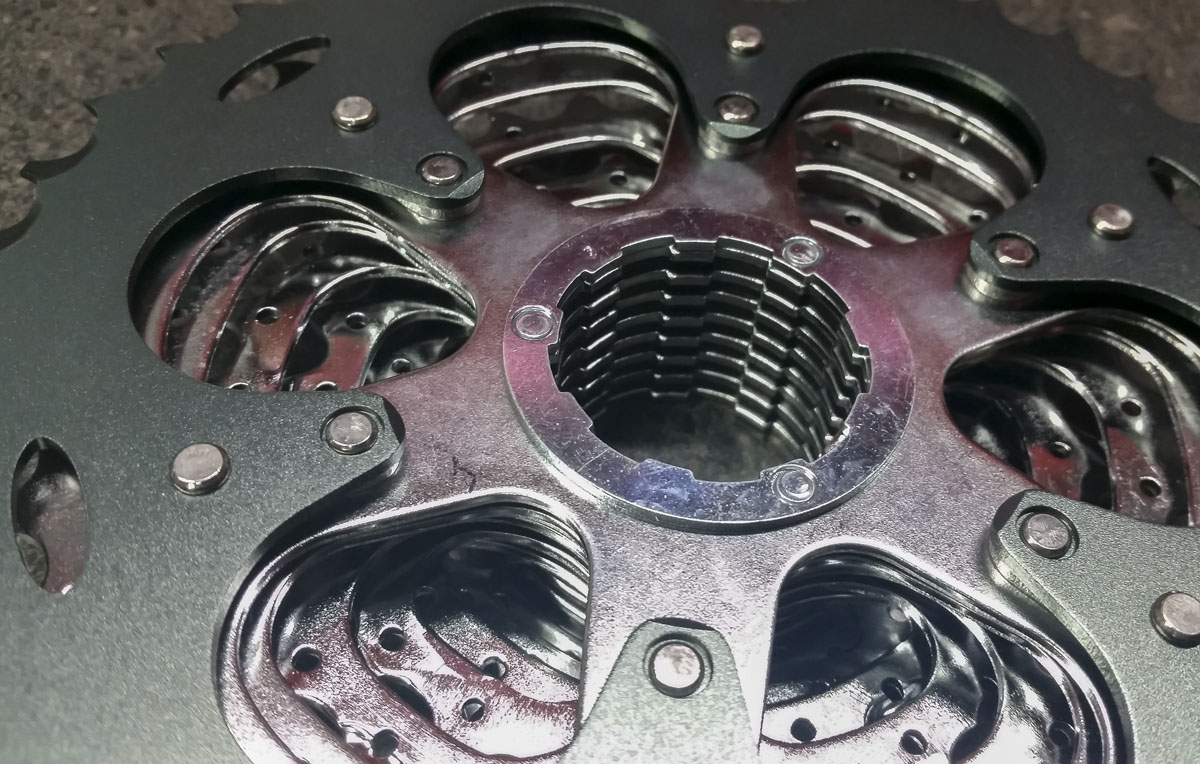 Singlespeed bikes suck. I say that on every ride that I’m riding one. They suck especially when they are singlespeed mountain bikes. They hurt and make me feel dumb. I try to chase down enduro bros and I run out of gearing. spun out, I watch them pull away…helplessly. That sucks the worst. It always pushes me back to gears. I should be able to keep a pro enduro racer in sight no matter what trail we’re riding or bike I’m on. I may not match them but I’ll be in the game.

After getting the brake fork done for the Red Baron and having a few rides on it as it was, now was the time to get some bandwidth. The speed of the bike is going up as the it get’s more features. Where at first the bike was terrifying at any speed, I’m now looking for more and more to push at the tires harder. 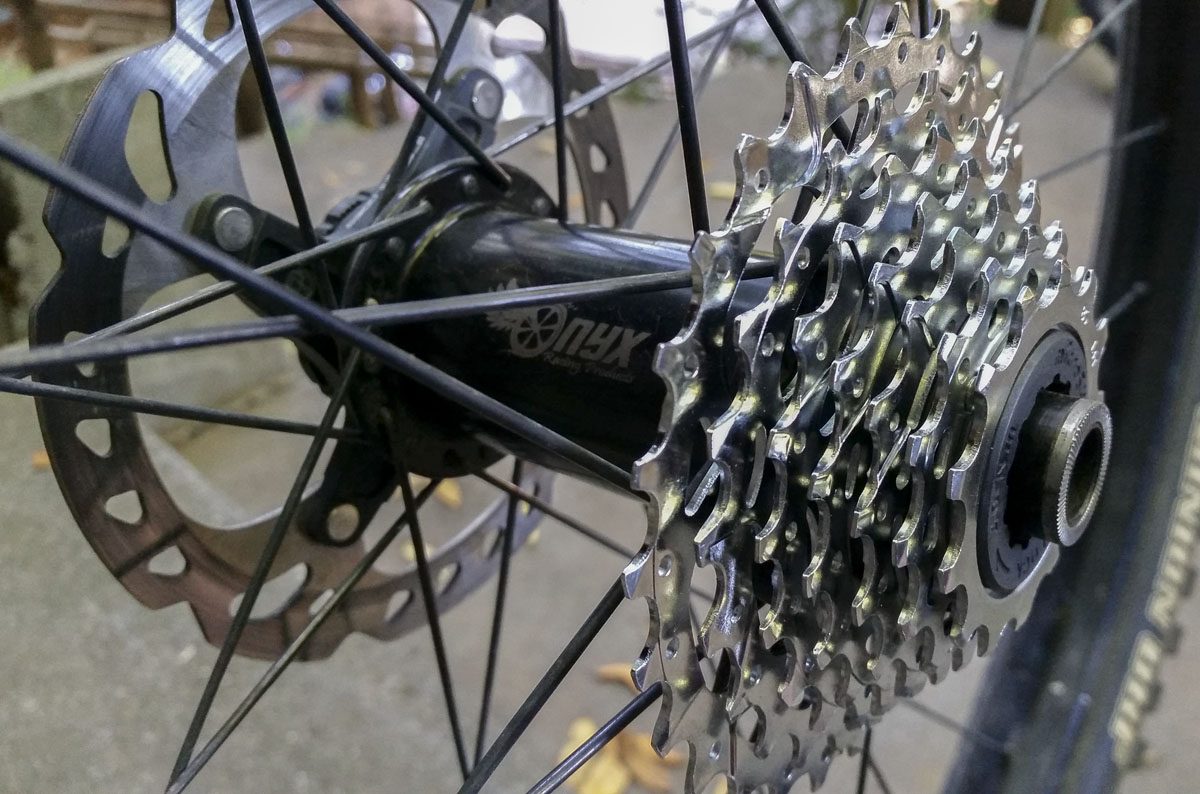 The killer 148mm Onyx single speed hub that I have on the bike has some room on the cassette for additional gears. This is similar on many single speed cassette hubs. I had used that feature for the two gears of the 2×2 drive I originally put on the bike. How much room is there really? I found that there is just enough for seven speeds at 11 speed spacing. Maybe more comforably if the guys at Onyx push the body a little harder. It’s an amazing addition for such a badass hub with 75mm flange width. What a wheel!!

How to get 7 gears? Cut up a cassette. The trick is finding one. It helps to use a low end model that isn’t built with aluminum carriers. For this, I chose the MicroShift CS-H110-1140t 11-40t cassette. It was cheap and on sale.  It’s nice to prototype with less pricey parts. Of the 11,13,15,17,19,21,24,28,32,36,40 cogs I used the 13-28 range as it was in the cassette. That with the 34t chainring, I have some range but nothing wild. Enough to make rides more fun on the Baron. I may push out t 13-32 or 13-36 but this was a simple start. Stacking cassettes is not as simple as some might think. Tooth spacing should be tighter in the high gears and wider in the low gears. If you make the cassette too linear in spacing it is going to suck in use.

Simply, grinding the peened and welded pins from this unit and the gears freed up. Welded posts on the 13t gear get sawed off and ground down.

The NX derailleur that I had on hand needed to have a longer screw added to it to limit the low range to seven gears. From 20 to 25mm. Also a washer under the mount bolt to help the shift into the high gear. 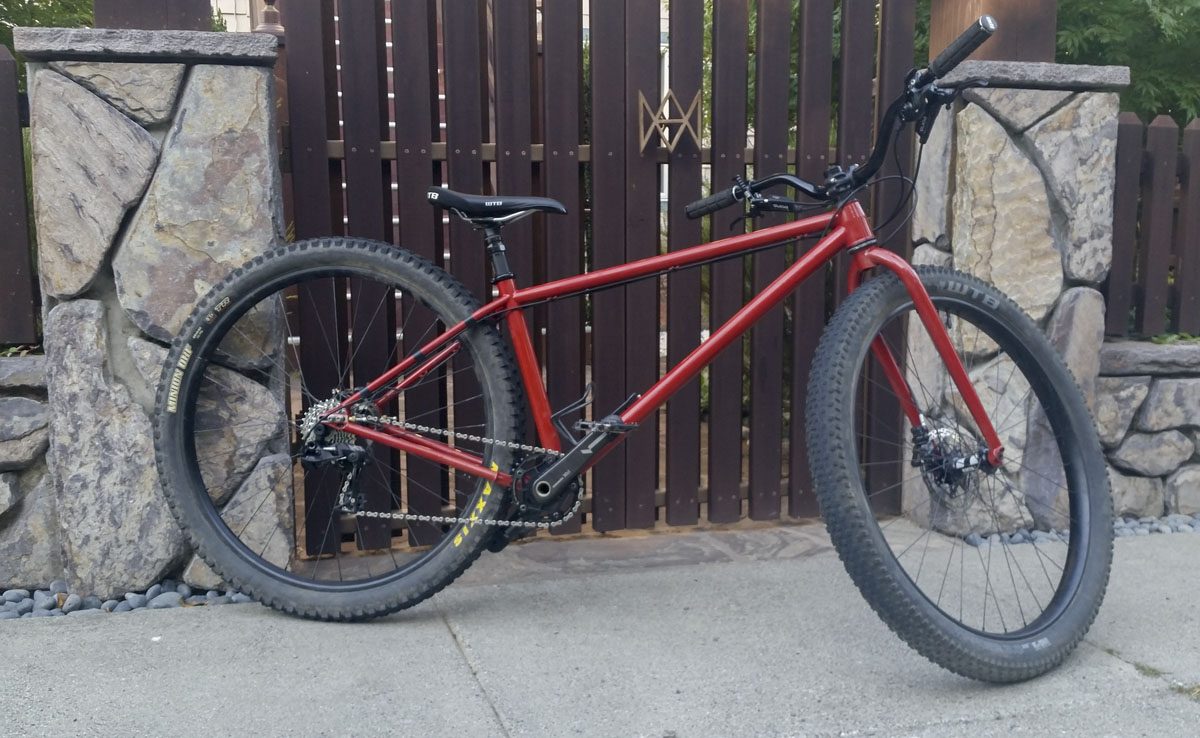 Having a derailleur to tension the chain allowed me to slide the wheel all the way forward in the dropout sliders. This will help liven up the feel of the bike on trail. Woke! I left the chain a little long so I can throw larger rings on for street use. The long cage makes this work nice.

This works very nice. It’s clean. It looks good. It’s far more usable in a variety of situations with a minimum of clutter.

This isn’t a new concept for me. A long time ago I did the six-speed MTB for a Hadley Singlespeed hub. That was 2006 when 9 speed and six-bolt rotors were a thing. I used that for a while, finally moving on. Looking back at my old work hurts the ego. Ugh. 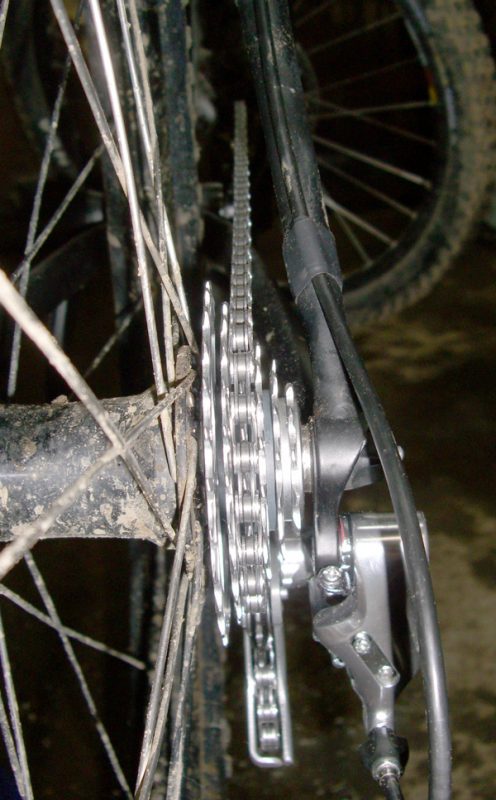 Why is this extra cool? Some folks do race better with less gearing. Others need super strong wheels. Many racing rules require a minimum number of gears on a bike. NICA requires 5 speeds;

RULE 4.2. NO SINGLE-SPEED BIKES.
Pushing big gears has been shown to be detrimental to the joints
(specifically the knees) of young student-athletes. Bikes must have
multiple gears including at least five cogs in the rear.

Many Dual Slalom and 4x rules mandate a minimum of 3 to 5 gears, so this is a work around for a very strong wheel with less to go wrong.