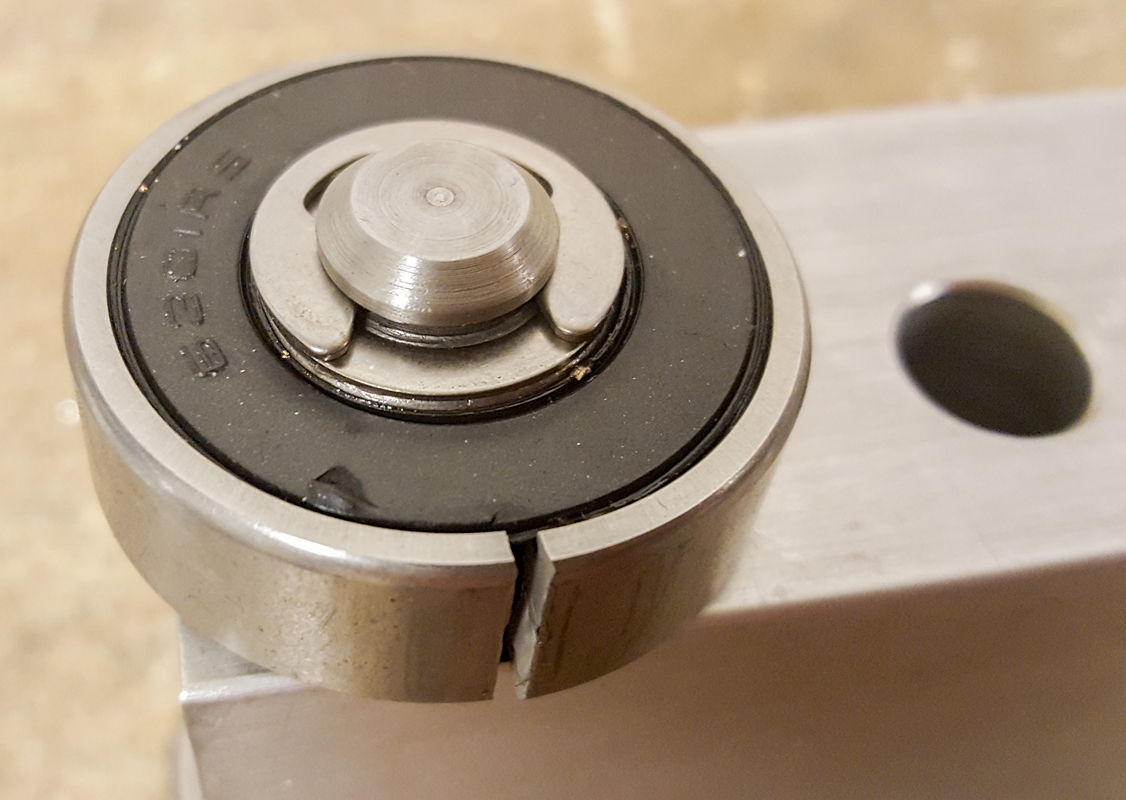 I built the Sopwith Camel klunker with a huge compromise, to be able to use the Von Sothen 26mm stem and Surly Sunrise Handlebar. I love how this combination looks and performs (in general). It keeps the bike in line with the klunker theme and using them reduced the work (at the time) of building my own parts as I was working on the Camel. Its also wise to design around commercially available parts.

This built in two major problems: 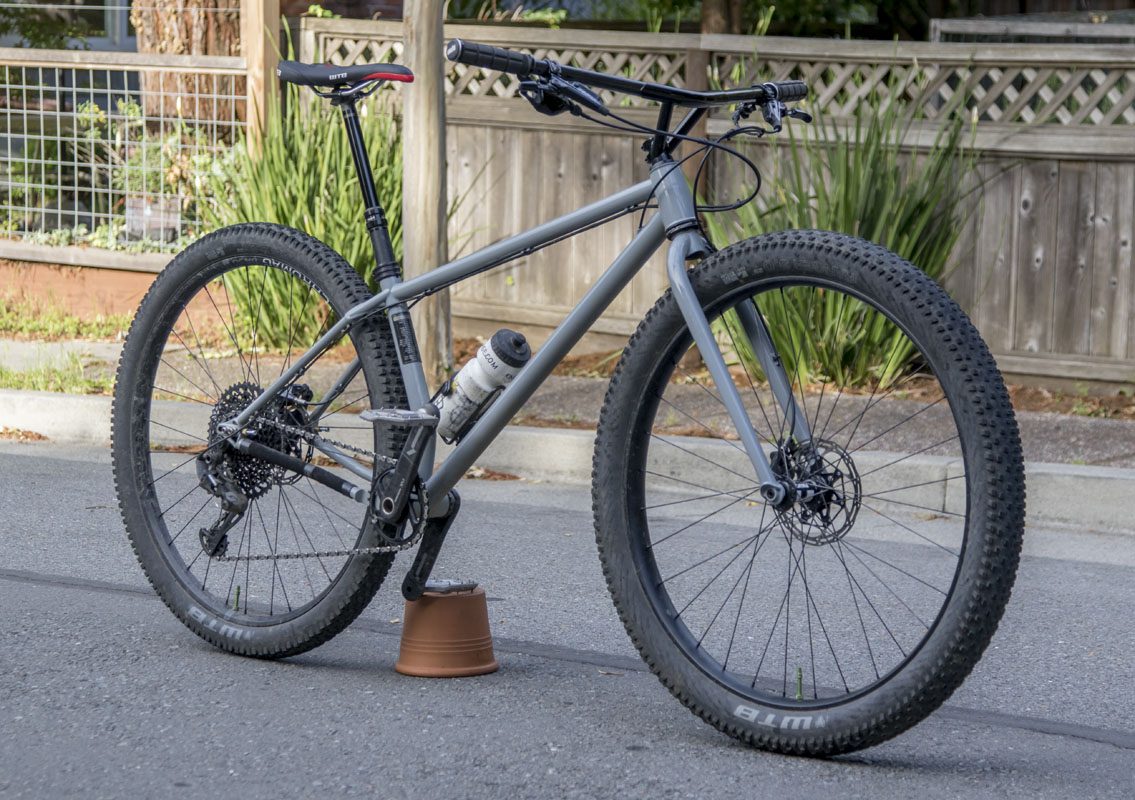 As the bike is used on more and more rides, the terrible feel of the steel bars is hard to ignore. They are brutal, like all steel handlebars, even with the large 3.0″ front tire taking some of the edge off. This is a problem and is in need of addressing. The Warbird/Airspeeder type bars have been a boon in comfort and performance for my other bikes, so I just needed to make a klunker version. The use of carbon spars in the welded lugs are a really great engineering solution to the design limitations of commercial parts but also for improved comfort of custom parts. The PVD bars move the bike where they are pointed but the grips have a few millimeters of damped flex that takes out much of the buzz.

The problem making a new bar system for the klunker is that my tooling is set up for a 9 degree sweep, not the 16 degree sweep that is nice for the wider cruiser setup. I decided to freehand the parts during fabrication and see how close I could get with minimal work. That turned into a lot of work but I got close enough for a usable prototype. 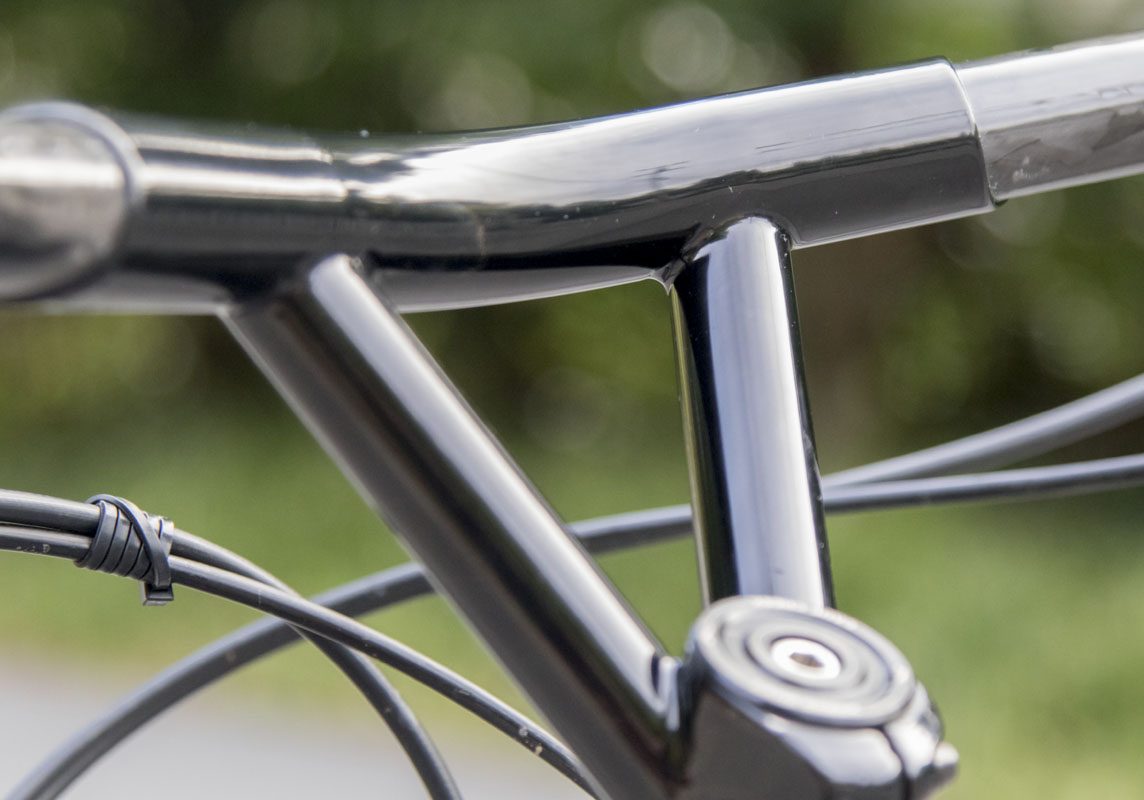 Getting the gorgeous 32 degree bend in the 1″ stem lug pushed my tooling to it’s limit. I needed to learn a bit and still ended up shattering one of the big 6301 bearings on my press bend setup. Certainly, it’s time to do a little more work on my setup if I plan to do more 32 degree bends. I had originally been thinking of doing a double 16 degree bend rather than a single 32 degree bend. That proved to be quite difficult to produce and it forced a change in plans. This ended up being a good thing as there really wasn’t room for it. Keeping the spars long will help them flex and that’s what I need.

A big change from the Airspeeder bar/stem is the use of 3/4″ diameter struts rather than 7/8″. This was to add more flex to the system, reduce weight, and improve the geometry available with the given parts.

The flex at the grip seems to be very good. It’s going to add a significant amount of comfort to the ride of this bike that may allow me to exact a bit more speed from it. Certainly, a little more ease of holding on is needed.

I decided to paint the bar lug gloss black. Sometimes it’s nice to have a fully integrated color look. Sometimes it isn’t. I’m feeling that a little separation from the frame will be good for it.

The new system is 480.6 grams LIGHTER than the steel bars and BMX stem. Cutting the weight in half at 483.1 grams, it’s just 200 grams heavier than an ENVE handlebar and stem. Not bad considering nothing about this project was done in the interest of weight and there’s plenty of room for reduction as the method is improved. Also, that the ENVE combination is one of the lightest and most expensive commercial option. 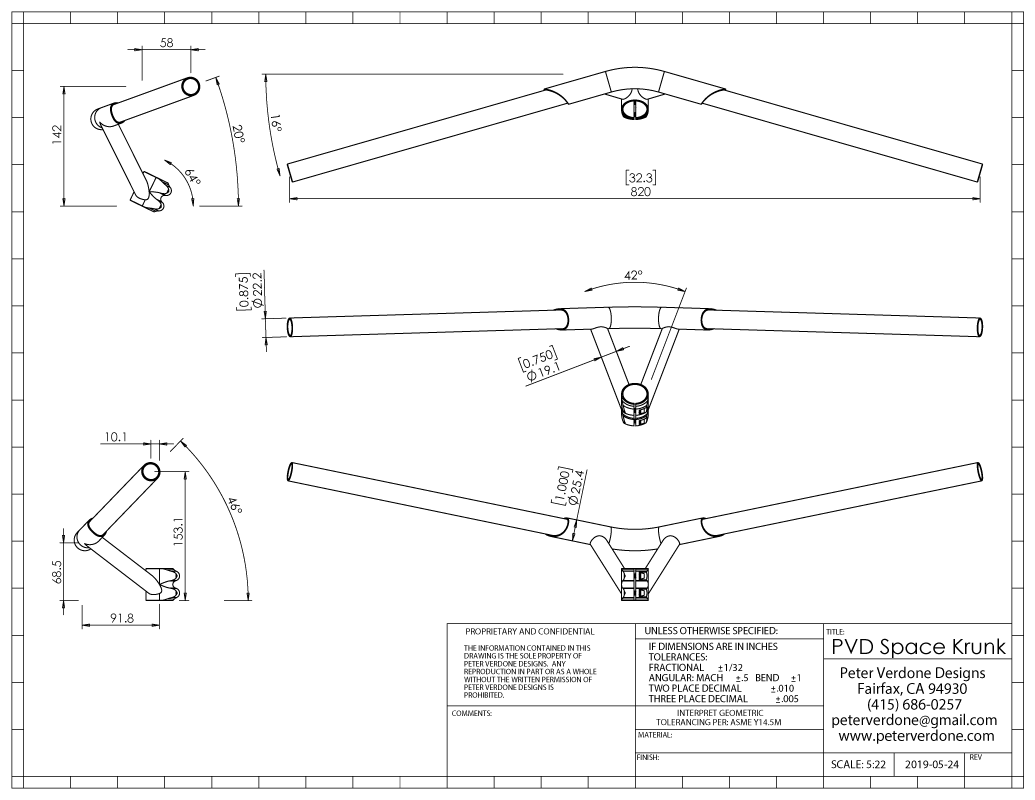 Many builders and tuners give little thought to the stem/handlebar component of the bicycle system. This leads to huge problems when seeking to maximize performance parameters. We want to get to the result that we plan for, not an accident. If the bar and stem aren’t factored in as they sit on the bike, we get results far from what we choose.

This gets interesting. Let’s look at what the bar/stem would look like if we had built the bike with an 832mm front center rather than a 800mm front center. Look at how different they look “on the bench” versus on the bike. Essentially, one parameter is changed in place but the setup looks so completely different. 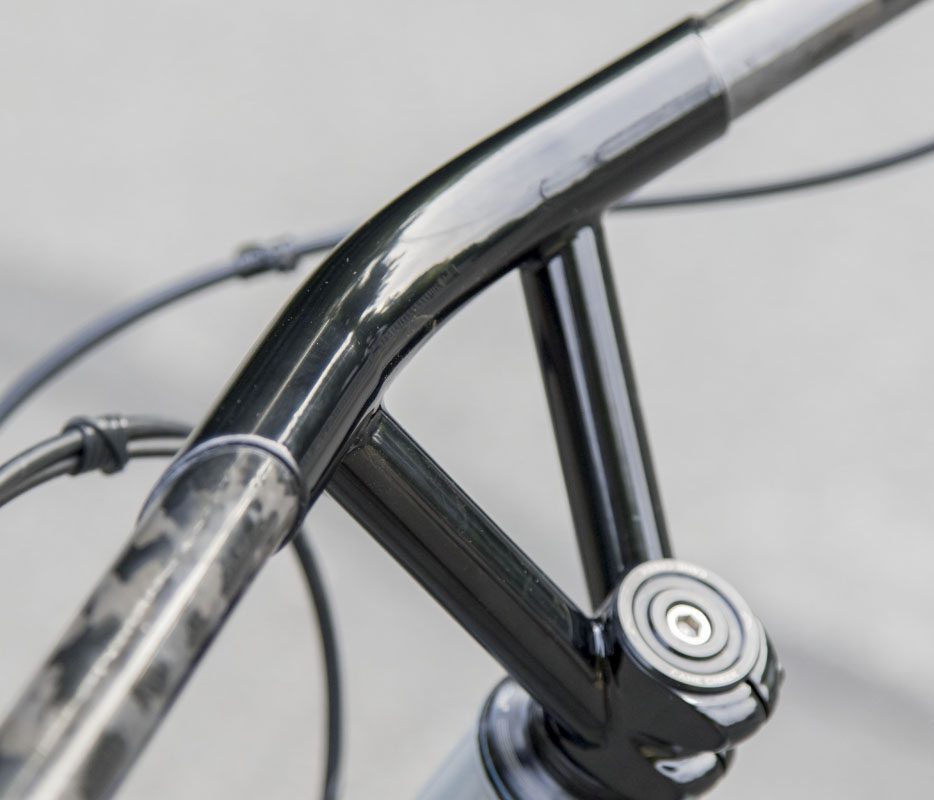 Given the use of the Paragon PMW SP2002 binder lug and moving the strut splay from 42 to 47 degrees, we have just enough room for the struts to sit at a 57.3 degree angle to the steerer. Welding area starts becoming our limiting factor.

The end of the bar goes from 58mm behind the center of the base of the stem to 90mm. A difference of 32mm. That’s a significant increase in possibilities. 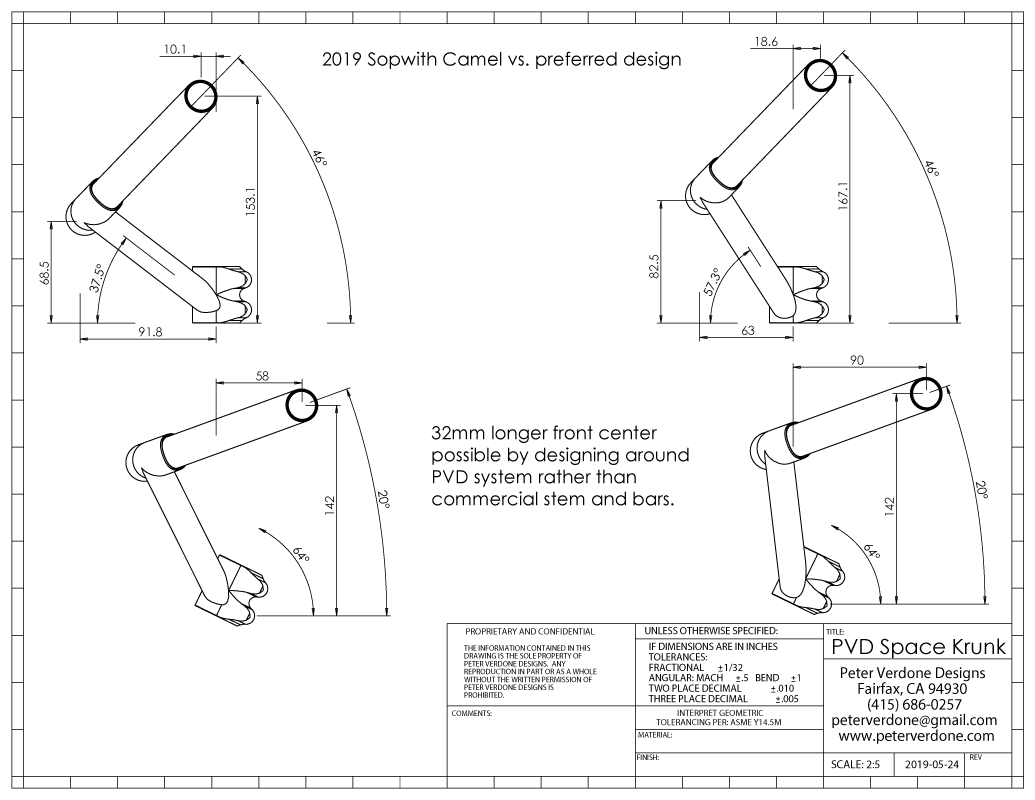 These kinds of missed opportunities are the harder ones. We want many things. We can’t have them all. Should a bike be more fun and faster or conform to an aesthetic? When is enough enough? When is it worth it to be able to use ‘off the shelf’ parts or dedicated to custom fabrication? Often, we need to move forward in fits and starts but we must continue to move.

Welcome to the world of PVD.

Origin of a species. 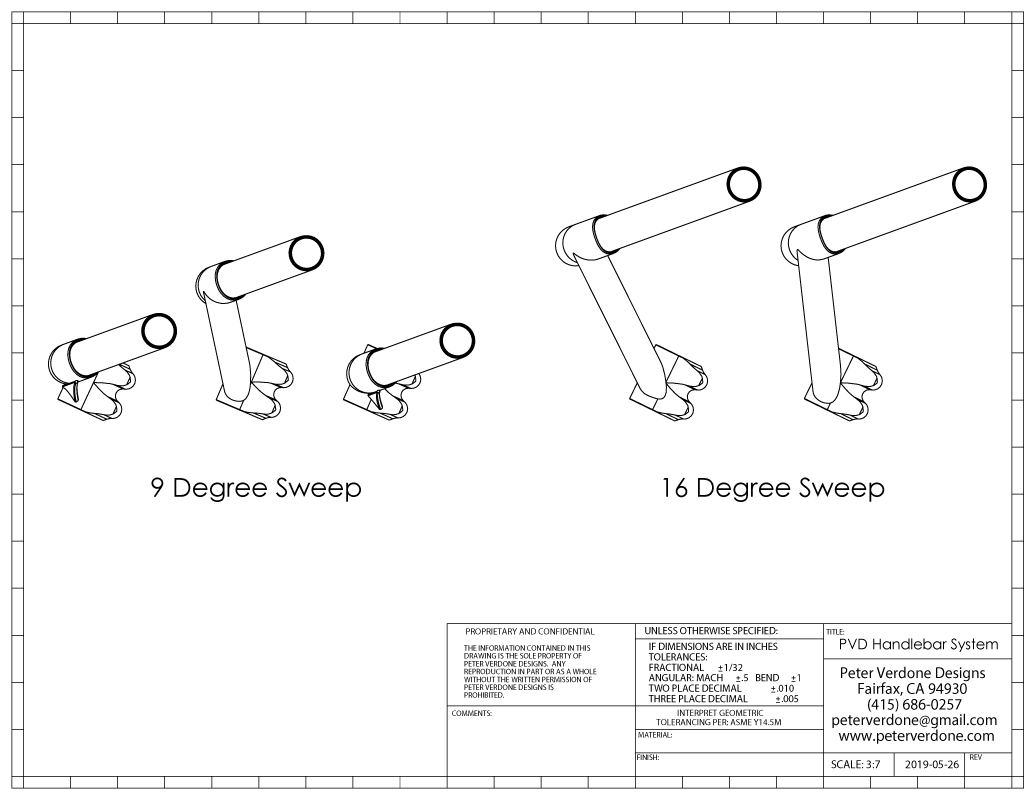 I took this a little further.  Here’s what the bike could look like with another degree steeper head angle and 24mm more front center. There’s just enough room with a specific stem design. I’m torn. This would have been a much better bike. It would have looked like a real departure from what the Camel. I may end up building this at some point. 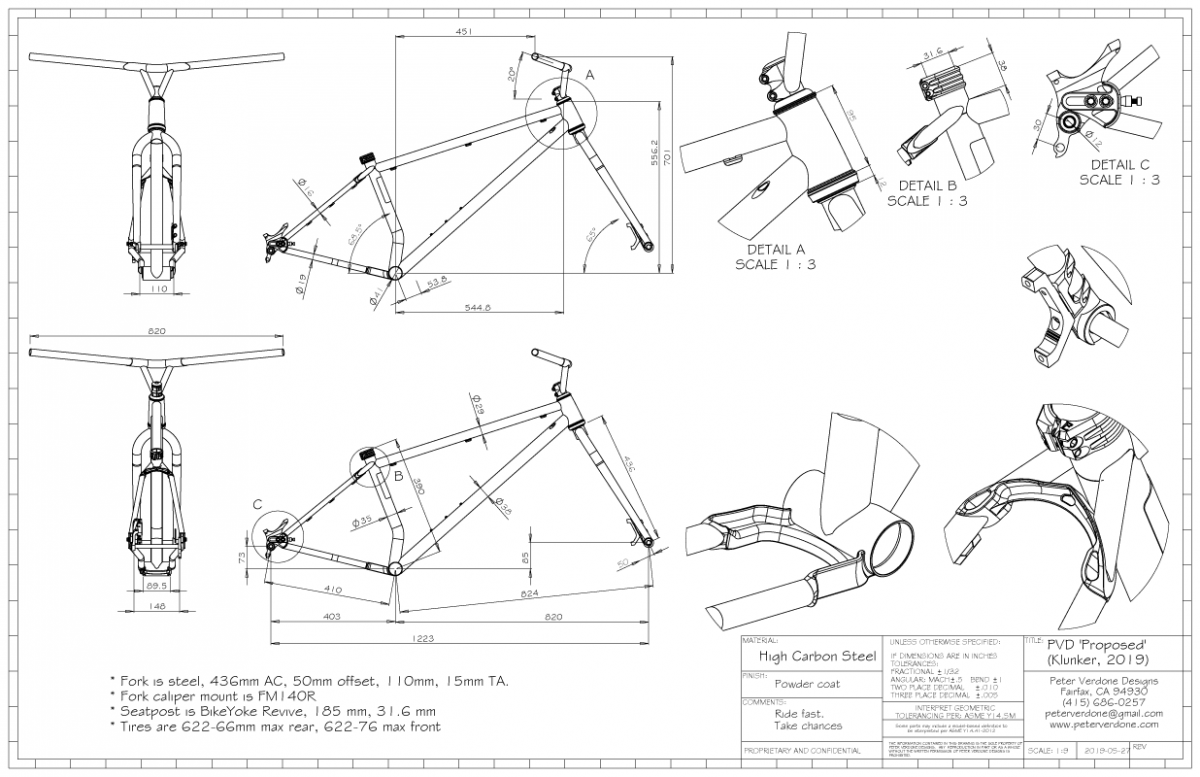 Since I was getting some black powder done, I chose to finally get the crazy stem I built for the Bird of Prey. Interestingly, this stem could work with the Camel and traditional flat bars. Maybe this can be used if I need to fit for another rider. I does look a lot better now. 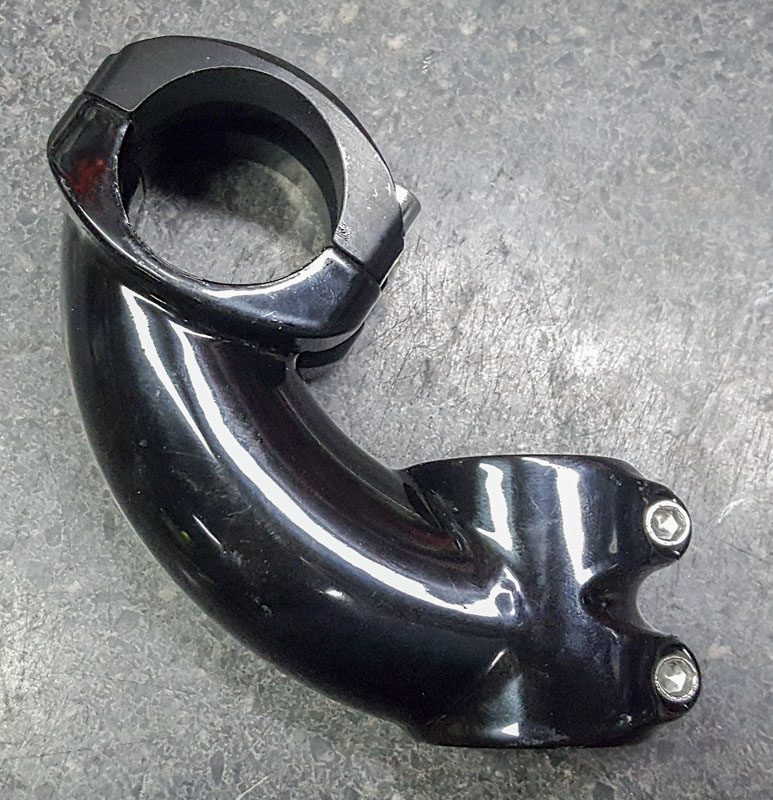 On the camel and using standard 785mm 9 degree bars, this stem produces a fit about 40mm lower and 20mm forward from the new construction. With a high sweep bar, it could be good for a smaller rider on that bike. 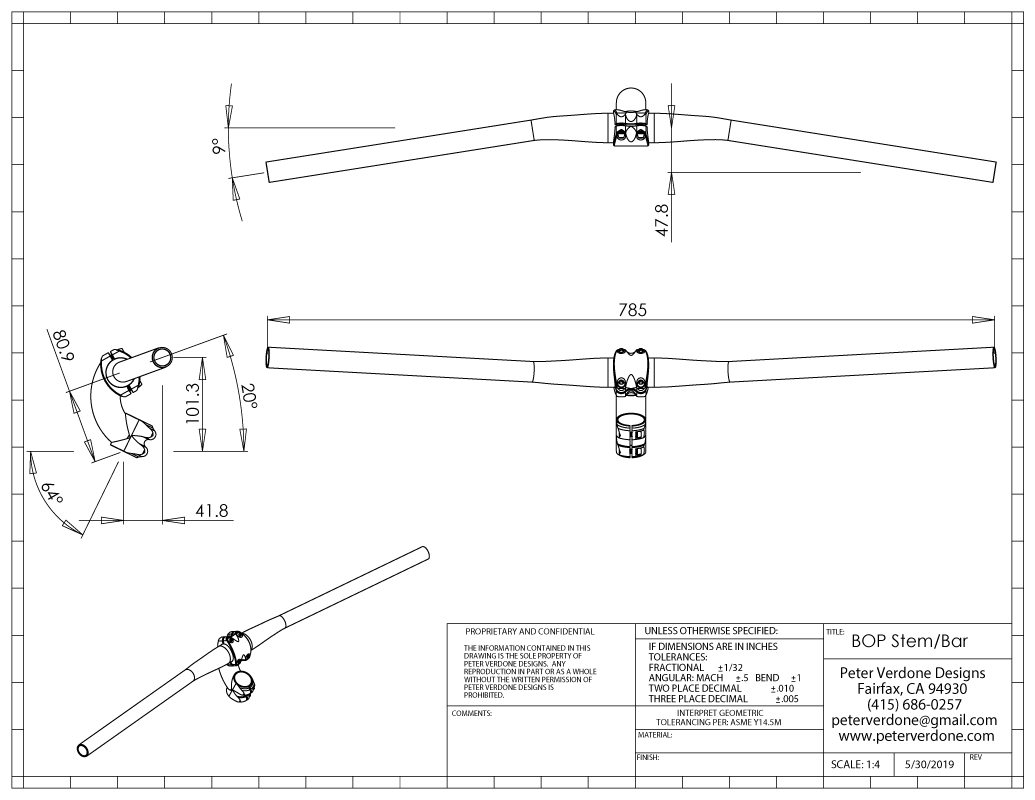