Three years ago, I put together a new Santa Cruz Butcher APP bike. I was looking for a super tough, cheap, simple play bike that I could do anything with. That turned out to be quite the learning curve for setting up longer travel trail bikes. The way that I initially put the bike together was just totally wrong and I was almost drove me to sell the bike. I kept at it and worked on it.

Bikes evolve and change. We find different uses for them and look at the same problems in different ways. Times change. Trends change. An older bike can stay relevant. You keep it up. You maintain it but also fine tune it. Swap a stem. Change gearing. Enough simple stuff over time can ensure that your bike does what it needs to every time you put your legs over it.

At this point, the bike is awesome. It’s still no lightweight but it’s super fun to ride. This is a case where a trusty 26″ single pivot bike with a front derailleur can be one of the most fun bikes in your quiver. 27.5 inch bikes may be the flavor of the day, but a good bike will always be a good bike. I trust this bike to hold it’s own against any of the new crop of uber-hype.

I just can’t express how dialed this bike is now. It’s just so fun and works so well. It’s a beast and I love her for it. She’ll hit anything as hard as I like and not even flinch. From epic all day rides to chairlift sessions, she’s a thriller. After riding so many bikes and having so many to choose from it really says something in how often I choose my Butcher. 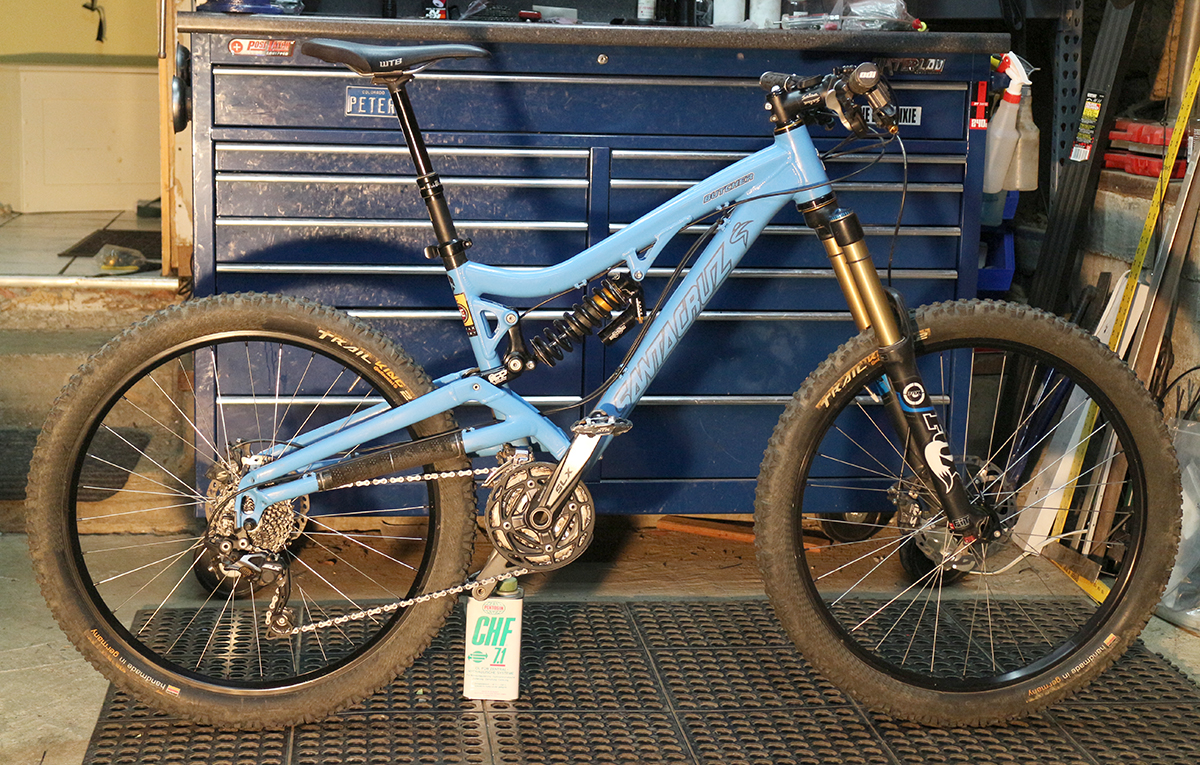 The wide range 3×10 drivetrain (44/32/24 & 11-36t) was basically unusable on this bike. There was so little chain tension and such a long chain that I was convinced that the chain was dragging on the ground at times. After some sorting, a 2×10 with 38/26 and 11-32t cassette was installed with a mid-cage clutch rear derailleur. Tight and right! This fixed all the drivetrain issues and keeps me on my toes pedaling the bike uphill. Between the clutch rear derailleur and the chain device (installed for a Mega DH race) the system is flawless in even the worst chunder. These are the second set of tighter range gears on the bike and they are almost shot. This bike has seen a lot of riding. I may go to an 11-34t cassette next if the bike can keep tension. It’d be nice to have just a little more for the climbs.

The most obvious swap from the initial build is the RS Reverb Stealth dropper post. I had to drill the frame for it. A mod that is well worth the effort. Those droppers are like cheating on the trail. Another major advance for us old high post guys.

The headset was swapped for a 1.5 degree angle set, moving the front wheel far enough forward to really balance the bike. This was probably the most dramatic change to the bike other than the dropper post. In my opinion, Anglesets are less about adjusting the head angle of a bike and far more about moving the front wheel either for or aft. Front centers have been creeping forward for years and an Angleset can bring an older design into the modern fold. I’d say that this bike could still be slightly longer but as is, it’s really good. I have a longer hardtail that  has some issue in the very tight trail. There’s a limit depending on what you ride and in Marin, 700mm of front center on a 650b is probably it. At 680mm with 26″ wheels, this bike almost feels short but never really gets hung up like the longer bike.

The fork was fixed by swapping to a much lighter than stock oil. I believe it was Red Line Light or Extra Light. I can’t remember right now. Stock bottoming valving but the newer SKF seals with proper greasing. I had pretty much given up on the fork until this last fluid and seal swap. It works great now.

The rear spring was swapped shortly into all this with a 550# unit. That gives the bike just the right feel up and down the hill. My initial spring choice was completely off.

The stem and bars were changed out for a wider, longer and lower position. The bars went up to 730mm from 700mm. 730mm is pretty much the widest possible handlebar for honest Marin singletrack. We have a little thing called trees on our trails. The stem dropped down to a -7x90mm setup. Now, combined with the more forward wheel, the bike climbs very well but remains balanced under aggressive descending.

On the cosmetic side, the decals have been removed from the rims giving the bike a much cleaner and less cluttered look. Also, the Deore XT cranks were needed on another bike, so this bike received some hand me down SLX cranks. The bike did get a PVD Magic Ring for bling.

The left shifter adjustment barrel is broken, but it’s working fine for now. I’m putting off fixing it as long as I can in case new systems are released.

An issue with the main pivot pin came up but was resolved by Santa Cruz. They were pretty awesome about this!

Here’s a lousy print of some of the important measures on the bike. Simple BikeCAD with the bike in an unlaiden state.