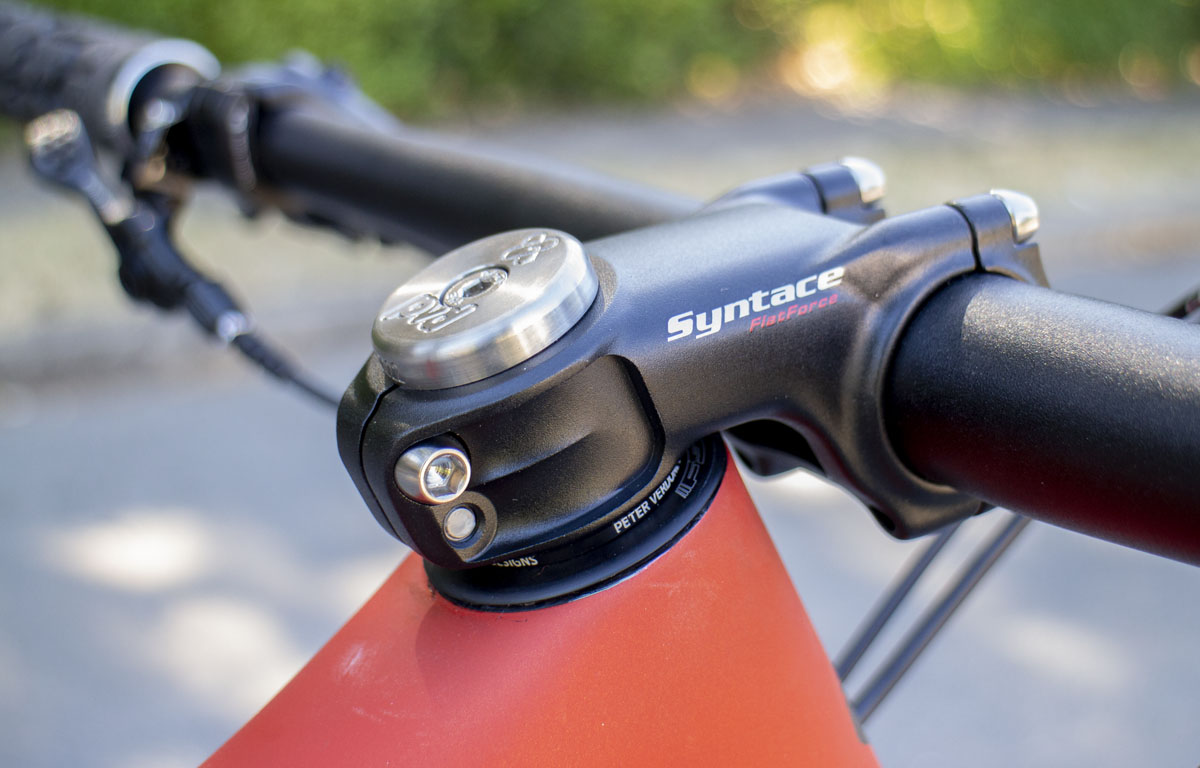 It was so long ago that I can hardly remember. Maybe a dozen years. New ways of looking at bikes was driving new choices in parts. I had to start getting more and more creative with setups.

More than any other part, the stem became a crucial part. Not just any stem, the RIGHT stem. That’s what we’re talking about today, those special stems that make the impossible possible. I’ll discuss a few of them.

In this post, you’ll also find some of the more accurate measures for these stems. I needed a good model of one of these stems for what will be in my next post. That turned into another wormhole. That lead to a lot of modeling of several stems. I embellished a little with the models for my own amusement, Still, the sizing and geometry remain correct.

Fit is critical on a bike. We labor for it. Make the changes. Try different things. Write it down. Changing stems is one of the most common and effective changes that can help with this. 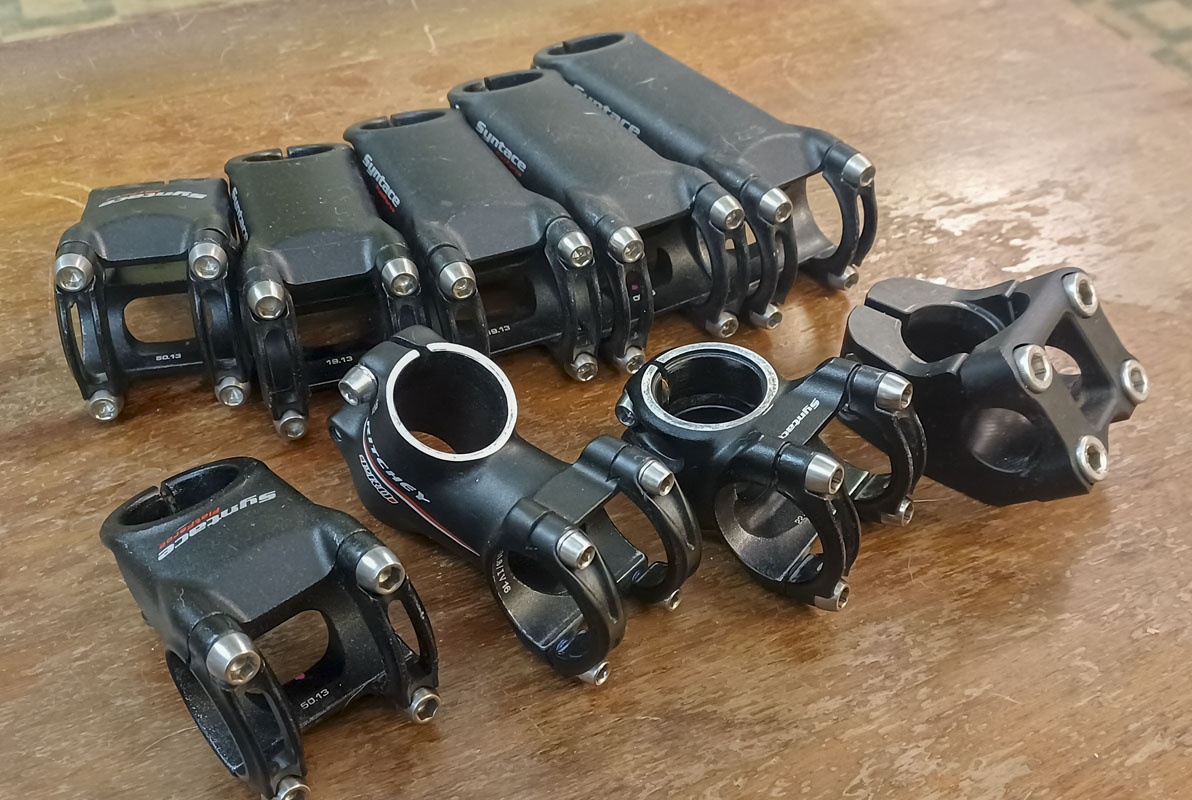 I’ve got a lot of stems buried in the shelves. I hoard them a bit, only to lend them out and give them away. A decent stem is basically free. The difficulty is having one that is just the right size for the need. 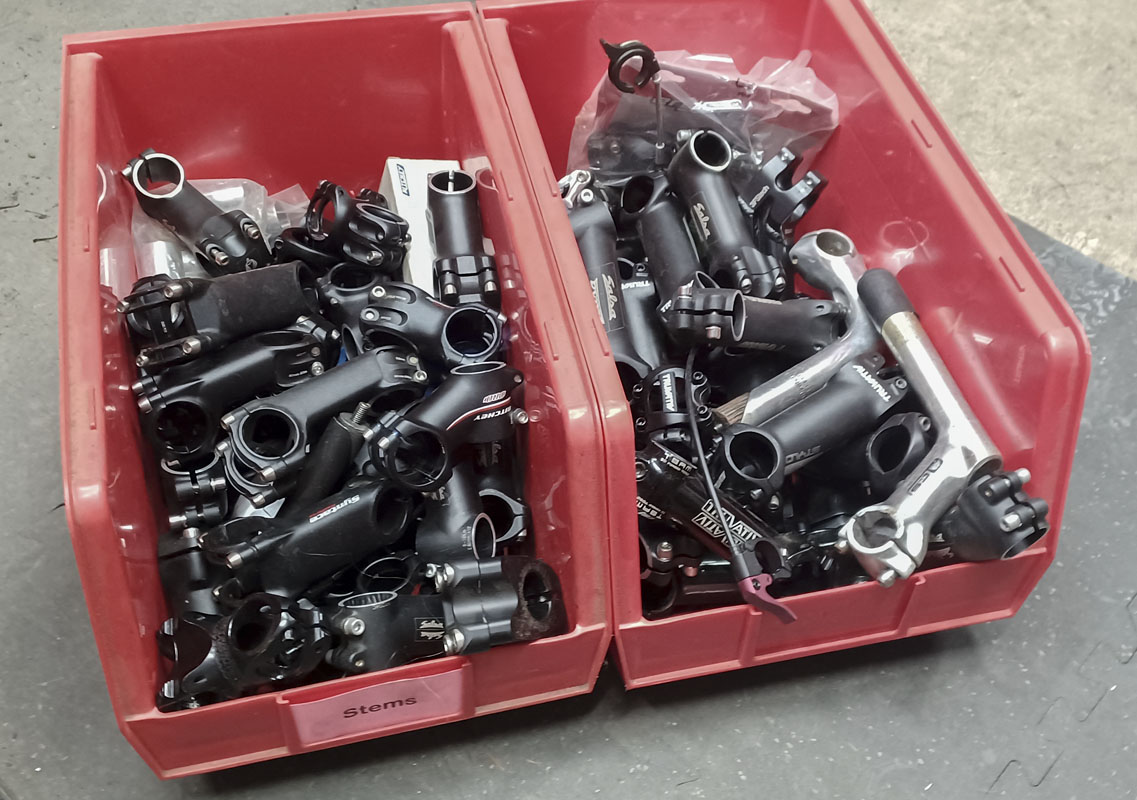 One of the more interesting head area that I’ve done. In 2015, the Genius went together, melting minds in terms of setups for the time. An Angleset in an offset head tube with a Syntace FlatForce 44mm stem and flat bars. 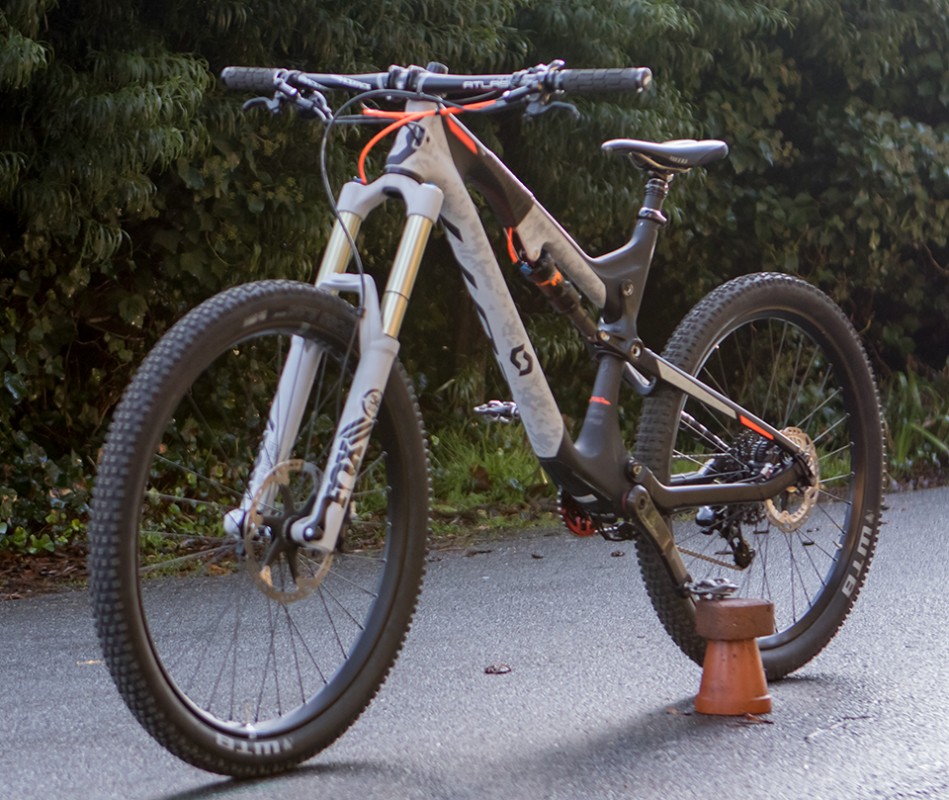 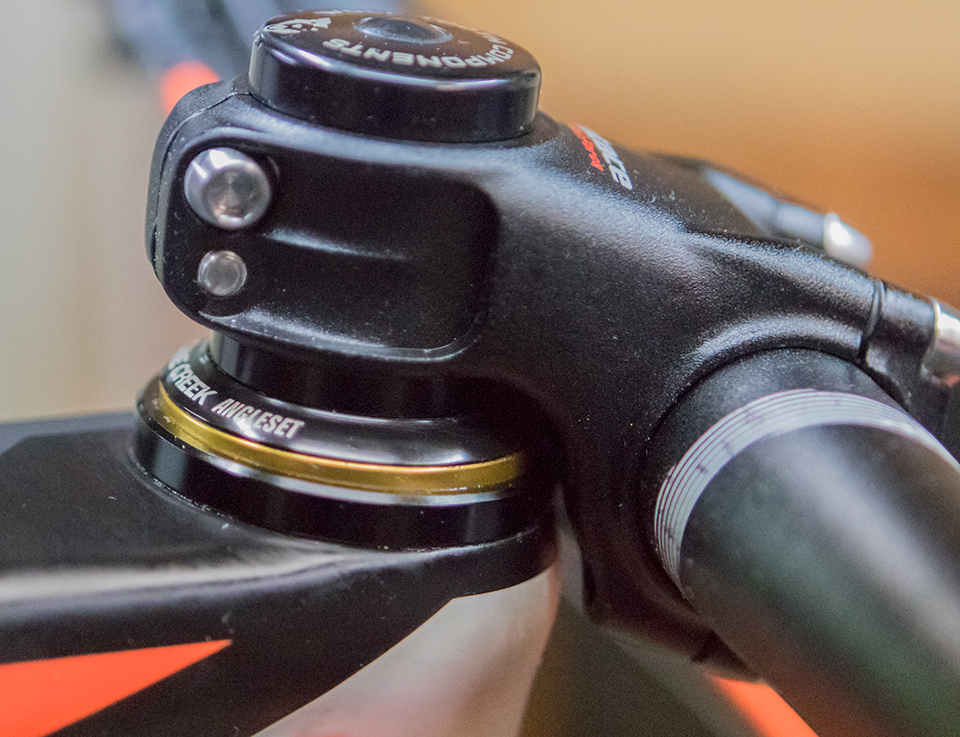 You’ll notice that none of these stems shown are for 35mm handlebars. That’s been discussed at length previously. 35mm handlebars are for morons. Just throw them away. Seriously, serious setups are next to impossible in this configuration.

The Syntace Flatforce stem is one of the more important stems in modern bike setup. It comes up a lot. Few other stems solve as many problems as this stem. Generally, the 44mm and 55mm should be available for mountain bike setups. The others come in handy at other times also. Be careful with the 44mm Flatforce stem as there are often clearance issues, especially on carbon fiber frames. 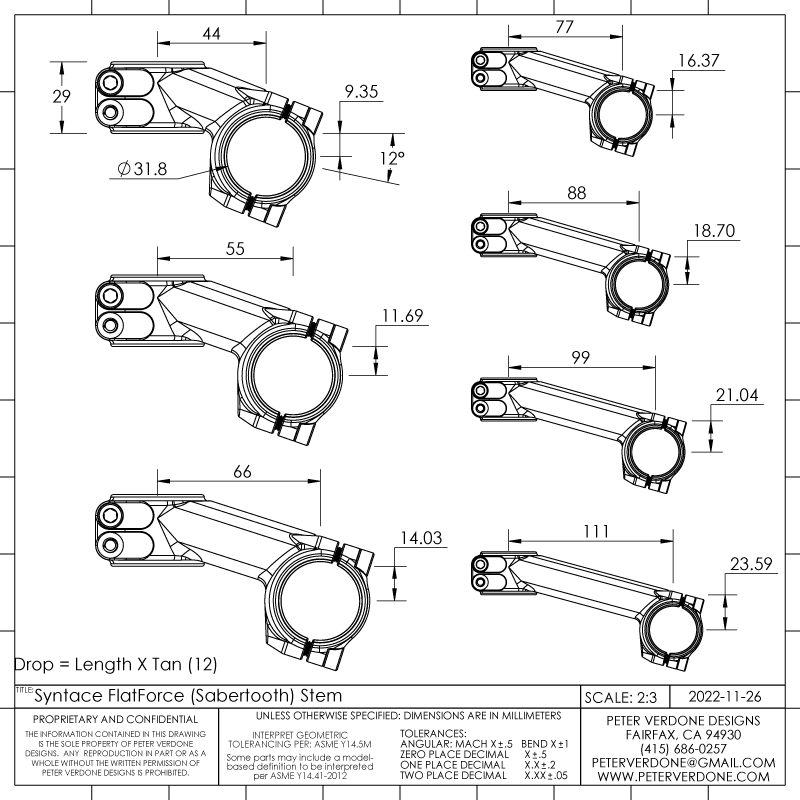 A fun equation that needed to be developed for the angle of the strut to remain geometrically correct in every configuration.

This is the 44mm shown separately. It’s a wild stem.

Another Syntace stem comes up a bit, the MegaForce II 30mm stem. This is the shortest stem you can get for 28.6/31.8 setups. It’s actually not possible for a stem in this configuration to actually measure a 30mm offset. Thus, the actual measure for this is 31.2mm. It’s got a flip-flop for a little height option. This stem appears to be out of production but there should be plenty around in the aftermarket. 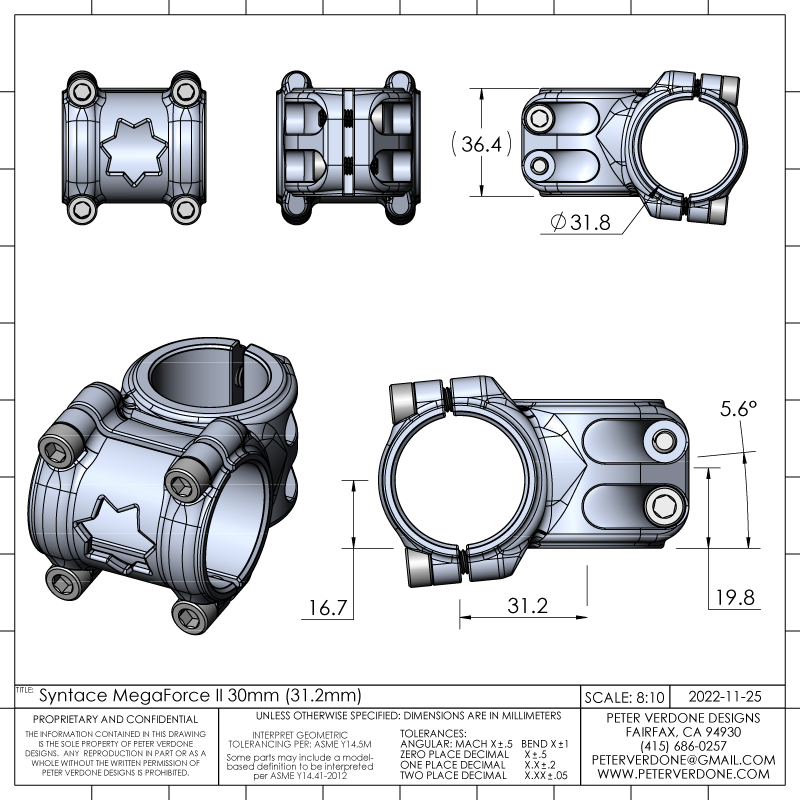 The reported numbers for the FlatForce stem deviate considerably to what was designed. I corrected the values in my model for proper systemization. 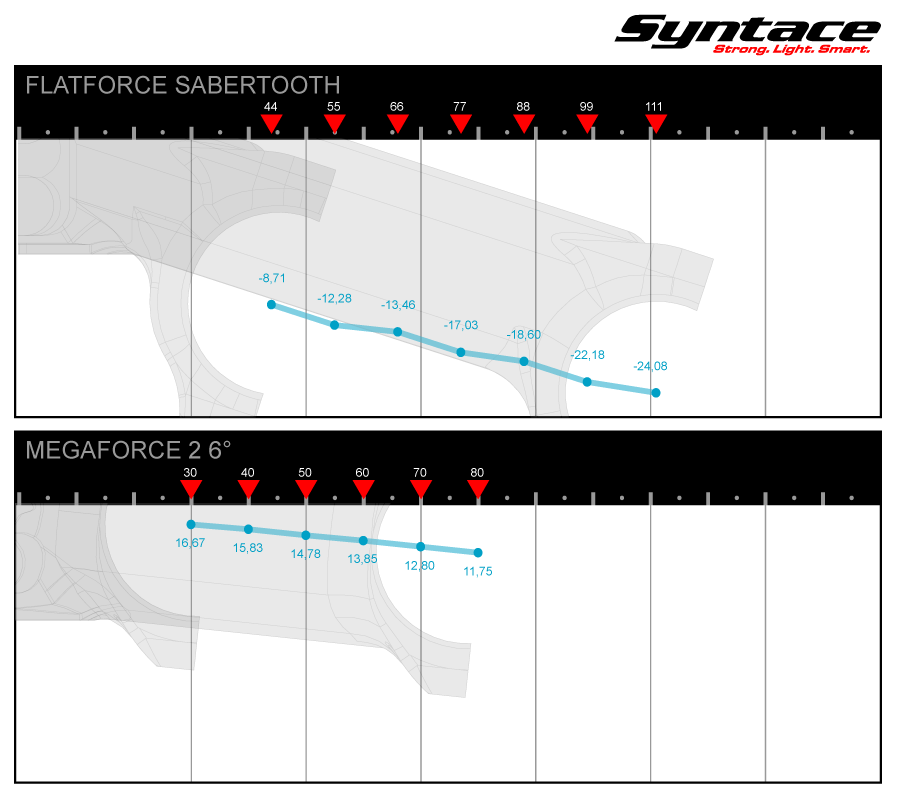 There are times that a short and high rise stem is needed. For that, the Ritchey Comp 4 30 degree 60mm get’s a lot of work done that others don’t. It’s overpriced for what it is but you need one of these in the box. 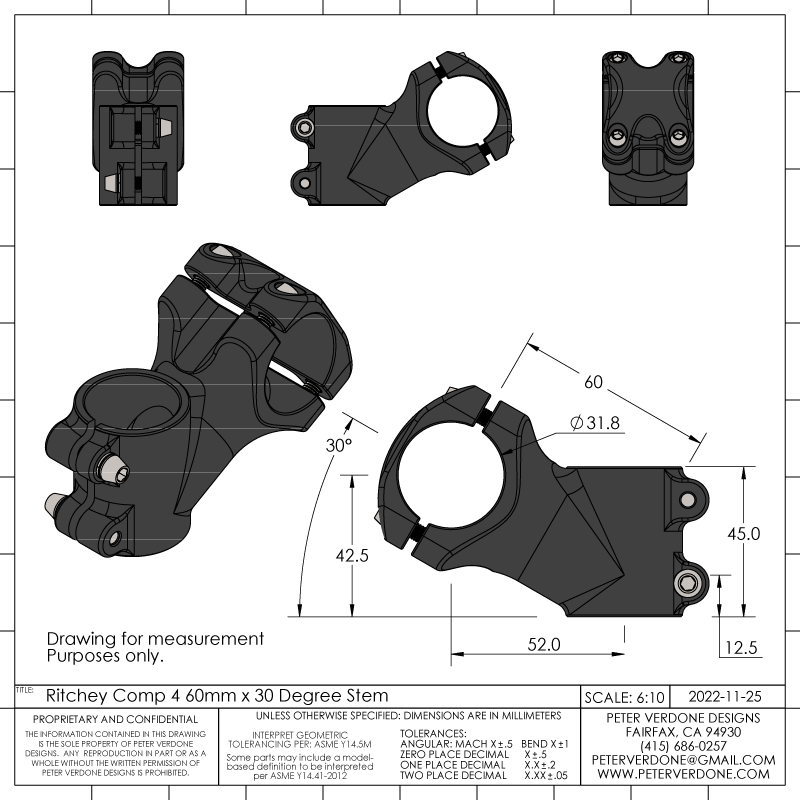 For Klunker setups, especially those with modern longer front centers, the Calculated Racing VSR 26mm stem is without comparison. It’s designed for the strength needed when gripping very tall 7/8″ bars. Yes, S&M makes something similar but there’s just no comparison, get the VSR. 28.6/22.2 setups. 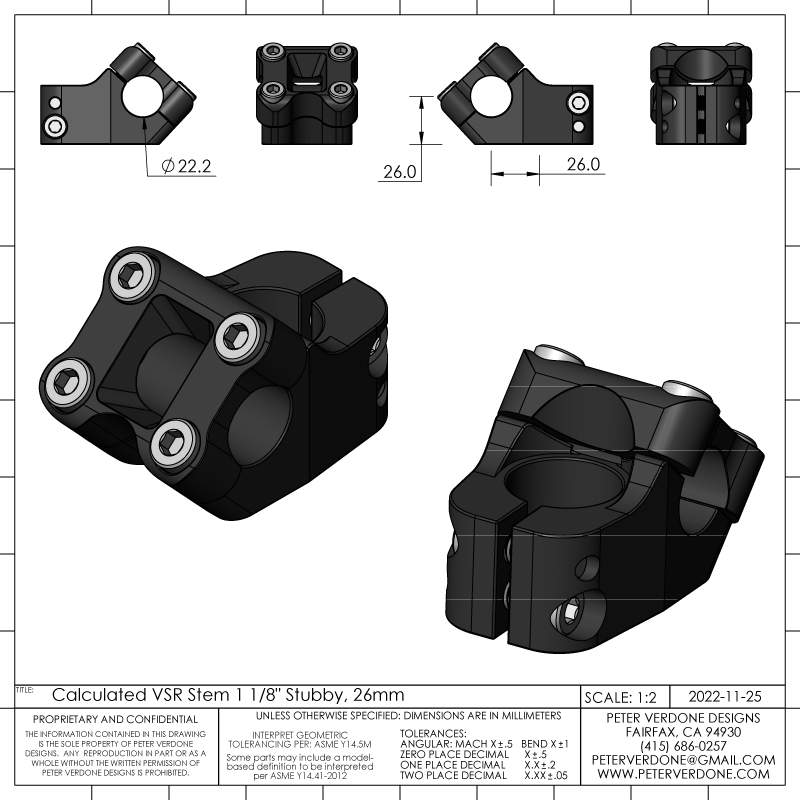 I figured that I’d show this, not one but TWO dropper stems. 3 positions, changeable on the fly. I might be the only person in the USA to have one of these…but I have two. Circa 2014 I think. Ridden 0.6 miles. Terrible, horrible execution. Never used again. This is another story.