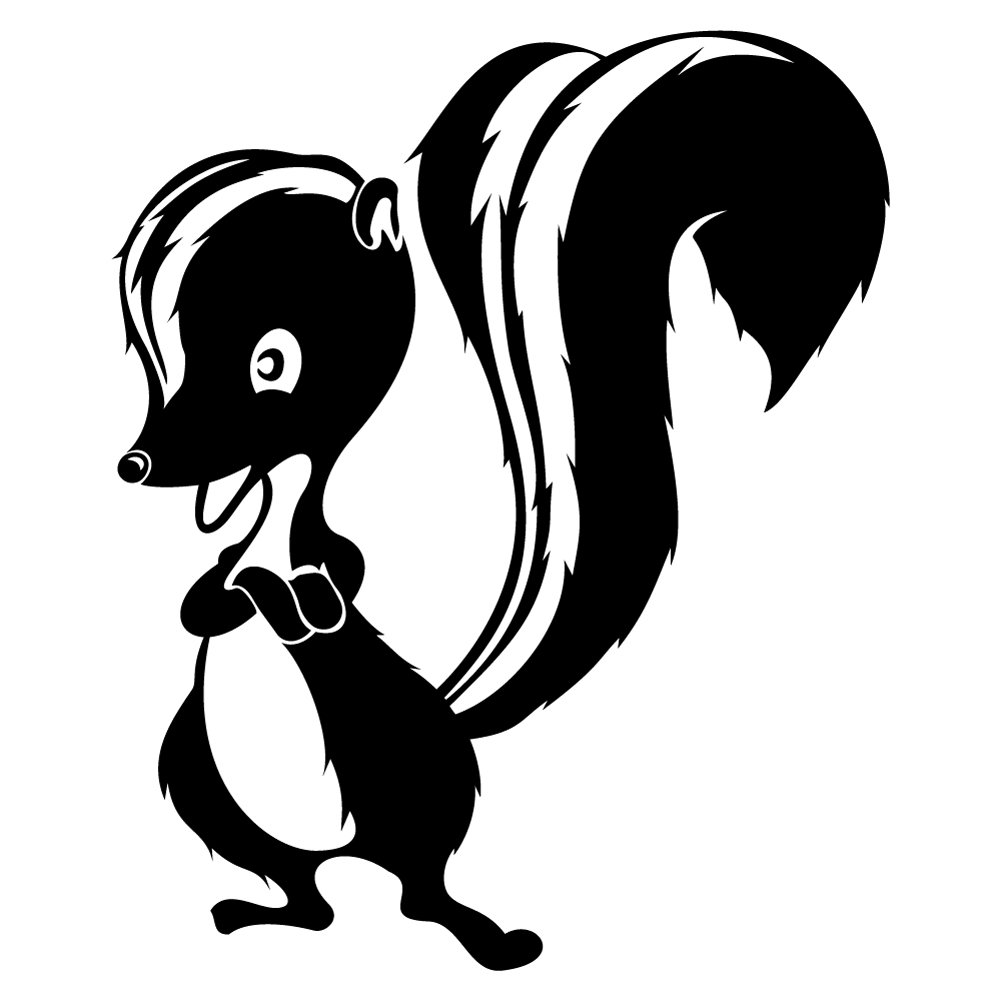 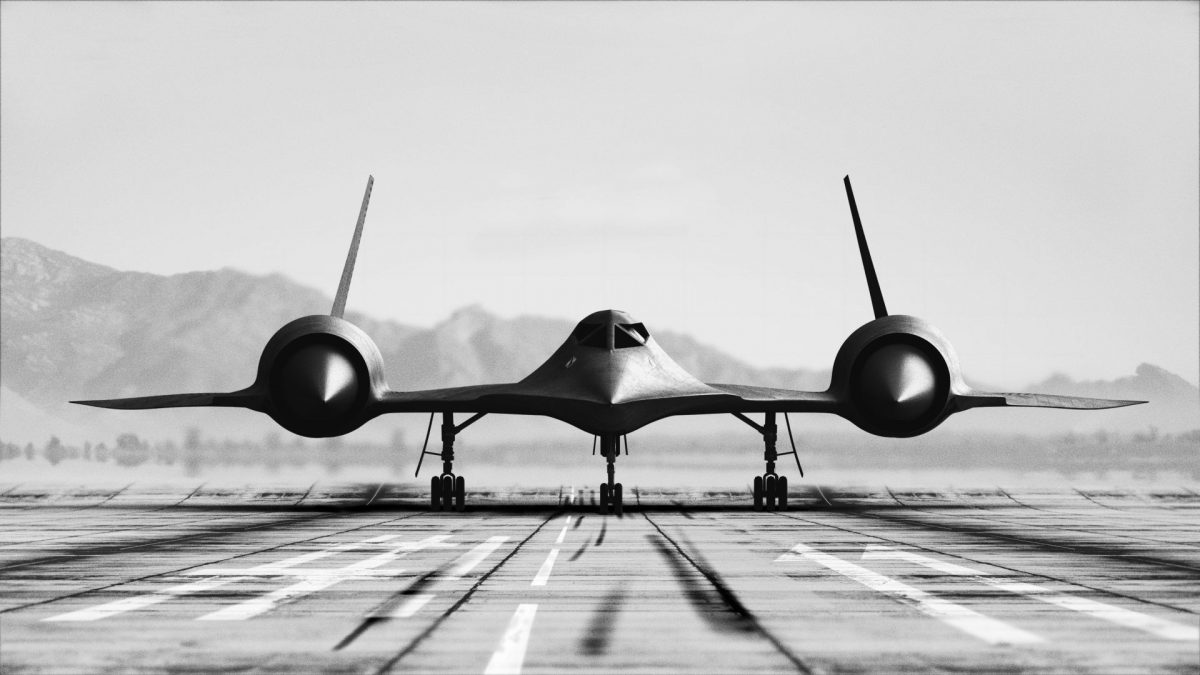 A year ago, after some development with the Red Five frame, I built the Concorde. It’s been a really special bike and it was named accordingly. It is a very long and super fast bike. Since this new bike is for going far bigger and much faster, there was only one name that would do; SR-71 Blackbird.

The design and construction of this bike has been a massive undertaking in many ways. It feels so good to be on the back side of it all. So many months separate the clean sheet of paper to first ride. 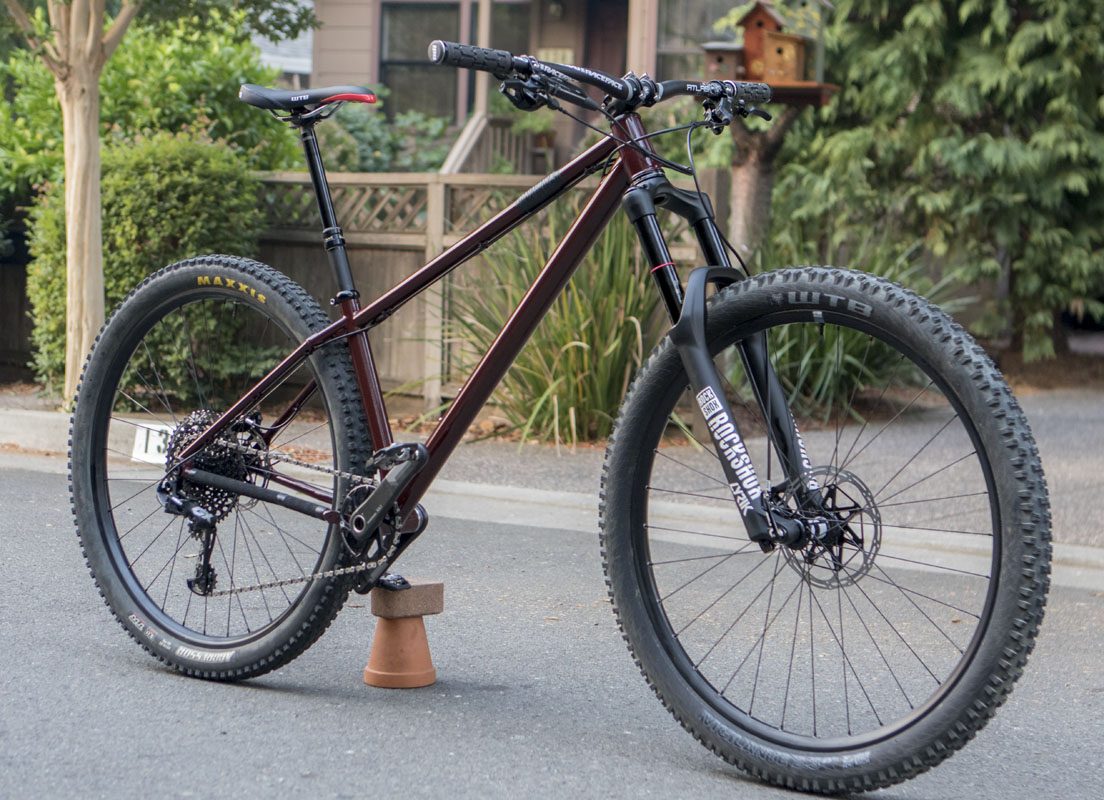 I fully re-vamped my solid models for the project. I found all the buried errors, broken references, and fixed almost all of the rebuild issues. The model is fully equation based now and can be radically modified simply by changing a set of driving parameters in a list or via spreadsheet. I’m really excited about this as it will make drawing bikes a lot easier and quicker.

I modified several of the fine points of how the down tube, seat stays, and struts meet their respective joints. Tangency can a problem in real life. Near-tangency fixes that. Just like a carpenter works to near level sometimes to please the eye, a builder has to play with tangency. I like to cup tubes and give them the most support I can. This moves connection to edges. So many tubes now project about 0.75mm past tangent. This makes things look right.

Most obviously new on this frame are freshly designed and machined head tubes, chainstay yokes, and seatstay yokes. Also, a new brake mount and support arch. These are highly refined from previous iterations and open up space for even 29×2.5″ tires in the rear. The seatstay yokes maximize leg clearance and still give room for the big 2.5″ tires that I expect to run very infrequently. Tire buzz on the back of the leg from the big tire is pretty bad unless the big tire is absolutely necessary. The seatstay yoke is the star of the show. It looks amazing in the frame with it’s tire in place. But don’t ignore the chainstay yoke. It is subtle. It get’s lost in the frame but it’s lines flow like the stresses that pass through it. Most remarkably, with the huge tire clearance and 425mm stays, the yoke allows the use of a 36t chainring. This is important in the era of 10-50t cassettes. Most other yokes fall far short of this duty. 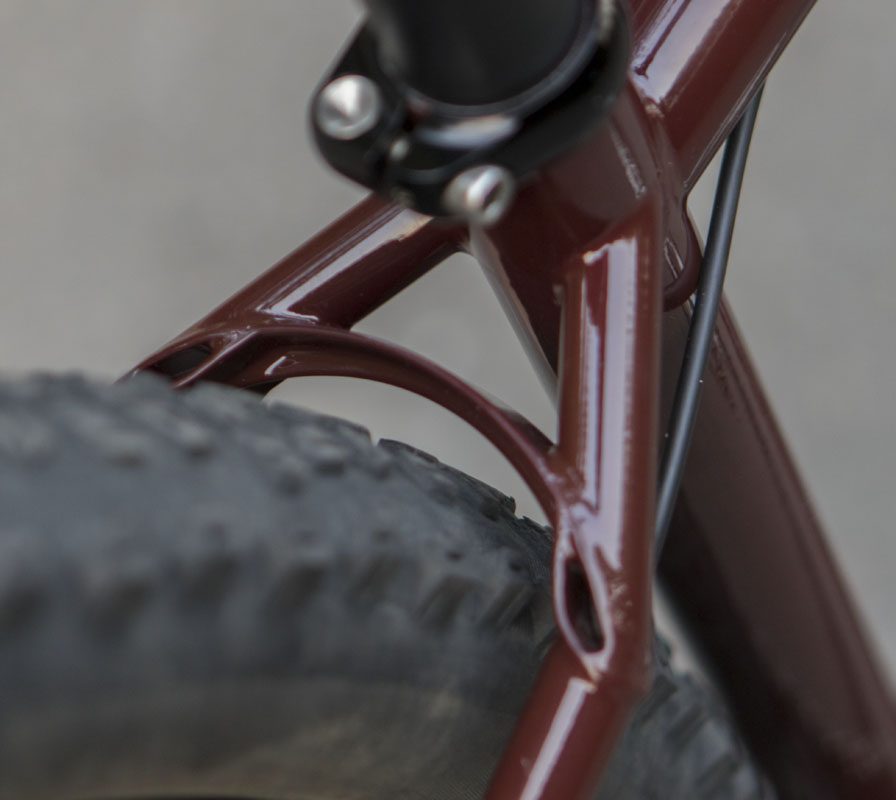 I adjusted the frames body position fit and riding geometry from the Concorde to make the bike more comfortable for longer periods of time and also more flexible for both XC and DH emphasis. Now, swapping from a 40mm stem to a 30mm stem gives me a bias toward serious downhill. The Concorde was maxed for XC at 30mm and was still more trail based. Not that it was a slouch going down hills, just that this bike should be faster. 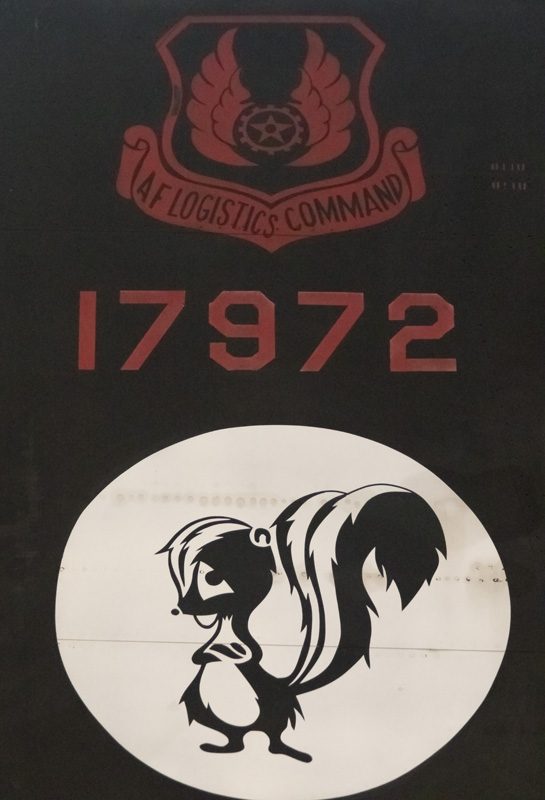 A slightly higher(2mm) bottom bracket to help loft the front wheel and longer chainstays to go with the movement of the seat more rearward. The longer head tube reflects my more relaxed positions I’ve been using as I get older. It’s hard to be an old guy riding a young man’s race bike. I wish it was 20 years ago and I could be making pure sport frames. I love the feel of a hardcore performance bike but the pain it gives me now is too much to bear. Old & fat, a deadly combination. 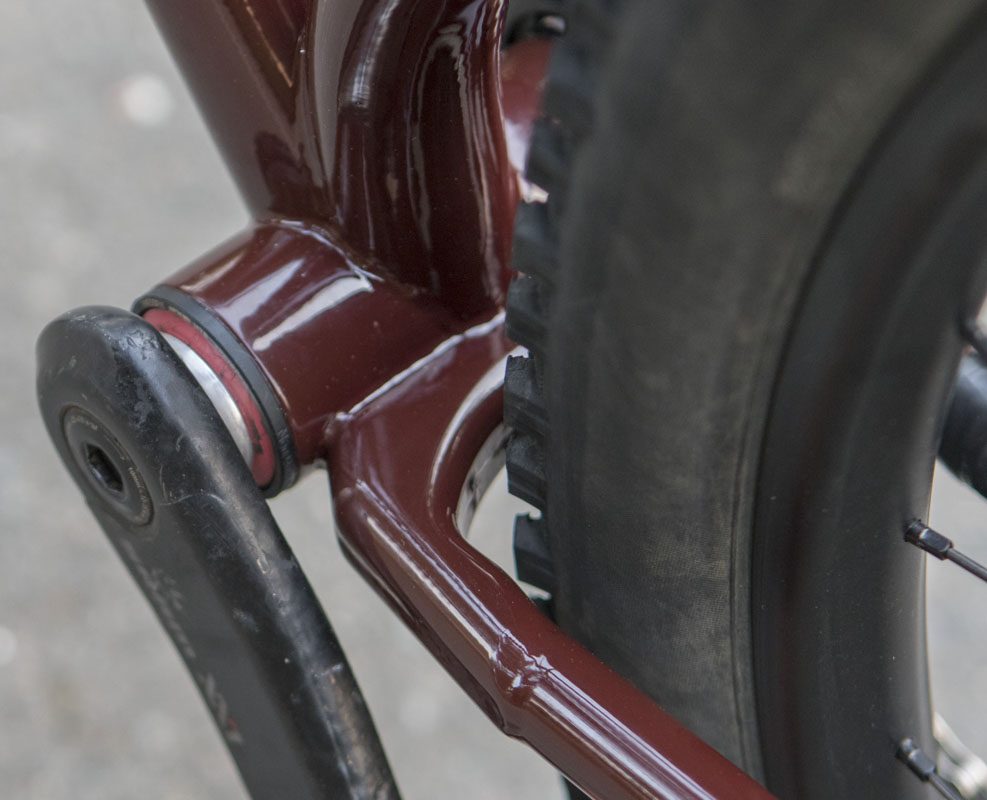 Assembling the bike at this time means I have a good opportunity to move up to SRAM GX12. Eleven speed left me really suffering in the range department. Hopefully, twelve speed and it’s 500% gain will help me get up hills but also pedal fast down. I’ll try a 34t ring (from 30t on GX11) at the start of the shakedown to see what I can get away with. I may still have to back down to 32t. With the gigantic 50t cog in the rear, no other hub than the legendary Onyx could perform well. Engagement is important. Seriouly, don’t use anything but an Onyx for huge cassettes. 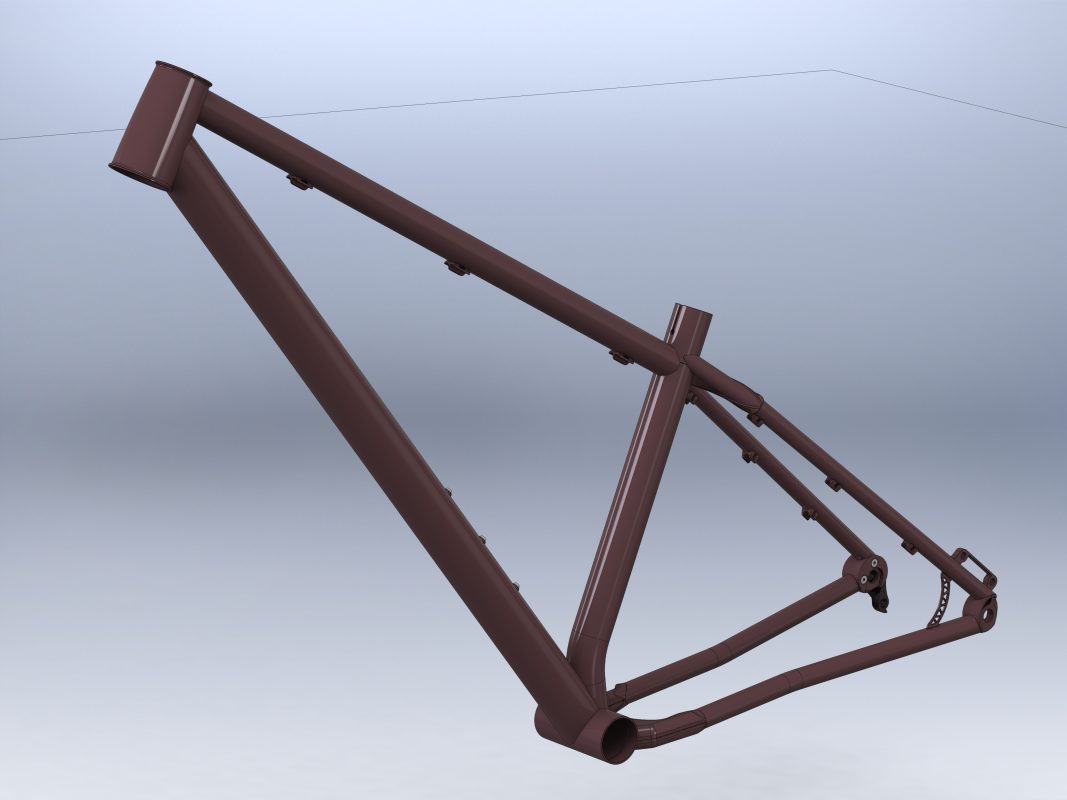 The Code brakes are kind of a splurge. I could probably have stayed with Guide RSCs but I wanted to test the best of the SRAM line. Not light but they look the business. I may end up moving these to an upcoming FS bike purchase as they really are overkill on this bike.

On the front of the bike is the new RockShox Lyric 170mm fork with 51mm offset. This is going to be a major upgrade from the Yari 160mm I’ve been pushing to the limits. I had tuned the Yari well and it’s performed spectacularly but all of the fancy internals of the Lyric I’m hoping blows it away. For a hardtail, 170mm of fork travel may seem like a bit much for some. I don’t believe this the case as 160mm has been fully exploited in my riding in the last year and 10mm more could be a boon. A DT Swiss 350 hub connects to the fork via Torque Caps.

I had some older XTR Trail pedals warrantied recently. I saved the replacements for this build just to go full pimp. These are the most beautiful cycling pedals ever made.

The WTB i29 rims are another move up for me. Coming from the great i25 rims, I’m expecting great performance but I’m a little worried about the additional weight. Twenty-nine inch wheels with real tires are very sensitive to increases in mass. The rear is a Frequency, the front is an Asym. With the wide rims, the WTB 2.3 tire grows to 2.45″ and the Maxxis tire increases to 2.4″. 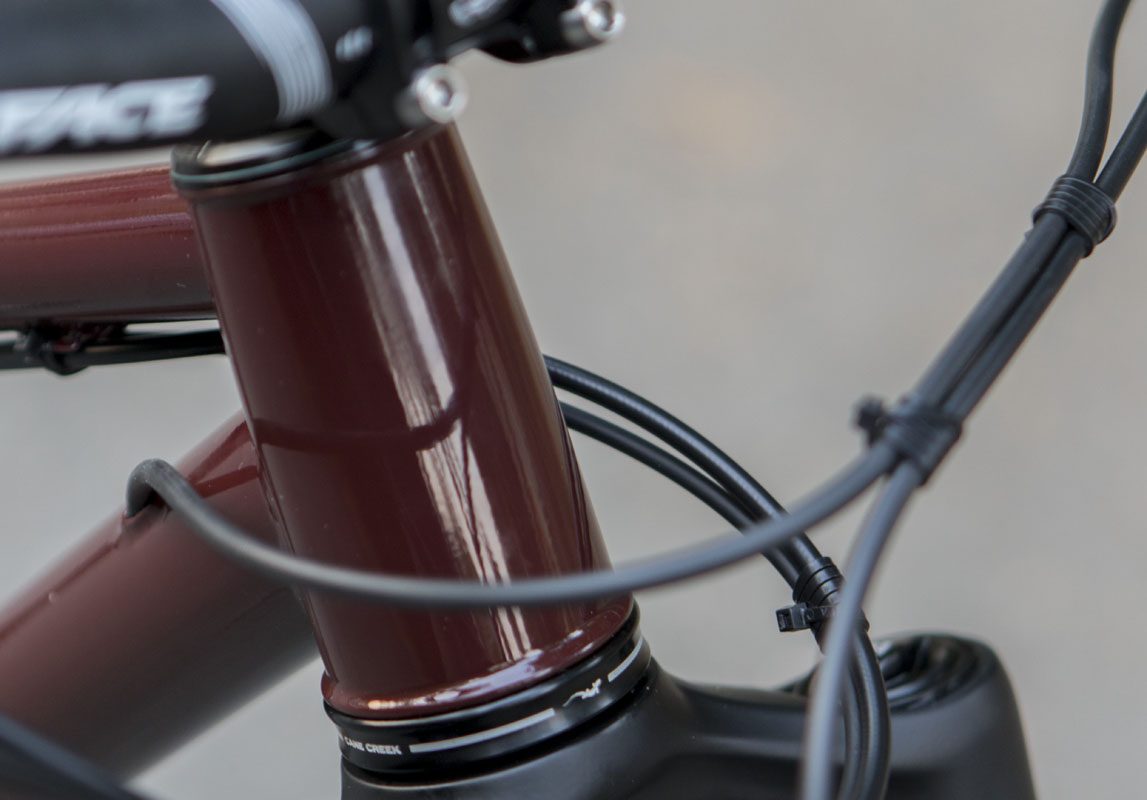 Paint: RAL 3007, Black Red. Not black but close. It’s hard to paint a bike black. I don’t like black paint.

Clearance for Q156 cranks. Q150 cranks may be possible with a shell width refinement. I’m looking into this. I may have to trim down to PF41/89. 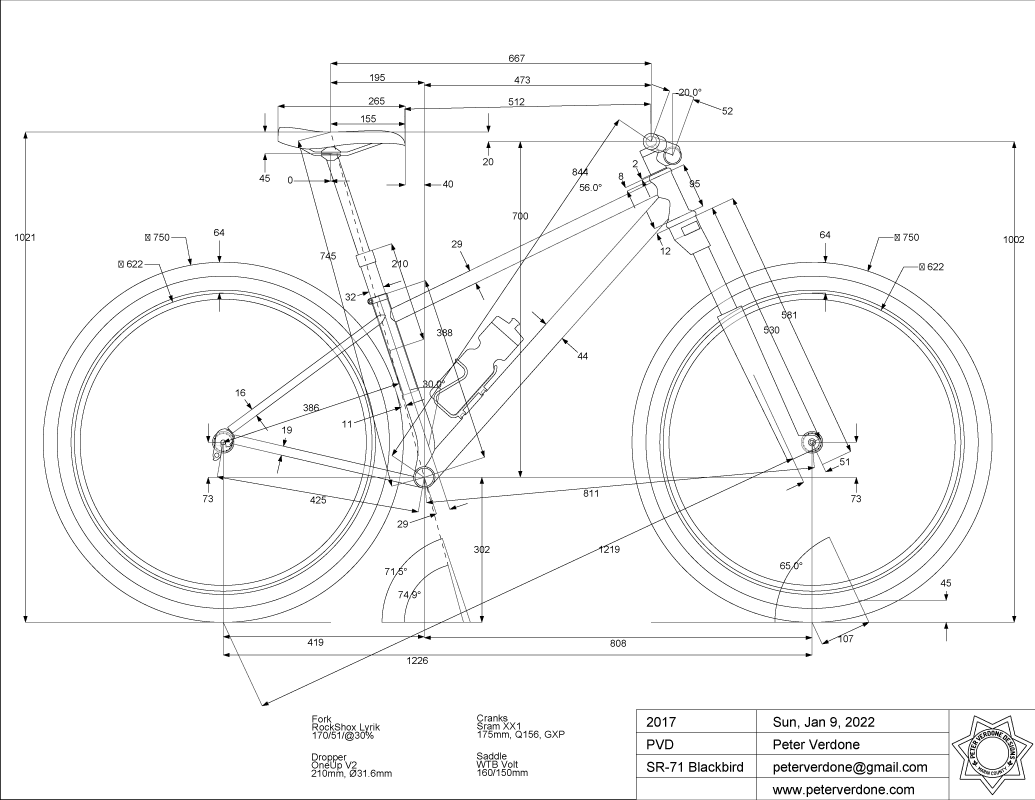 The Blackbird as currently ridden in April 2018 w/ 180mm fork. It’s so dialed and just magic. 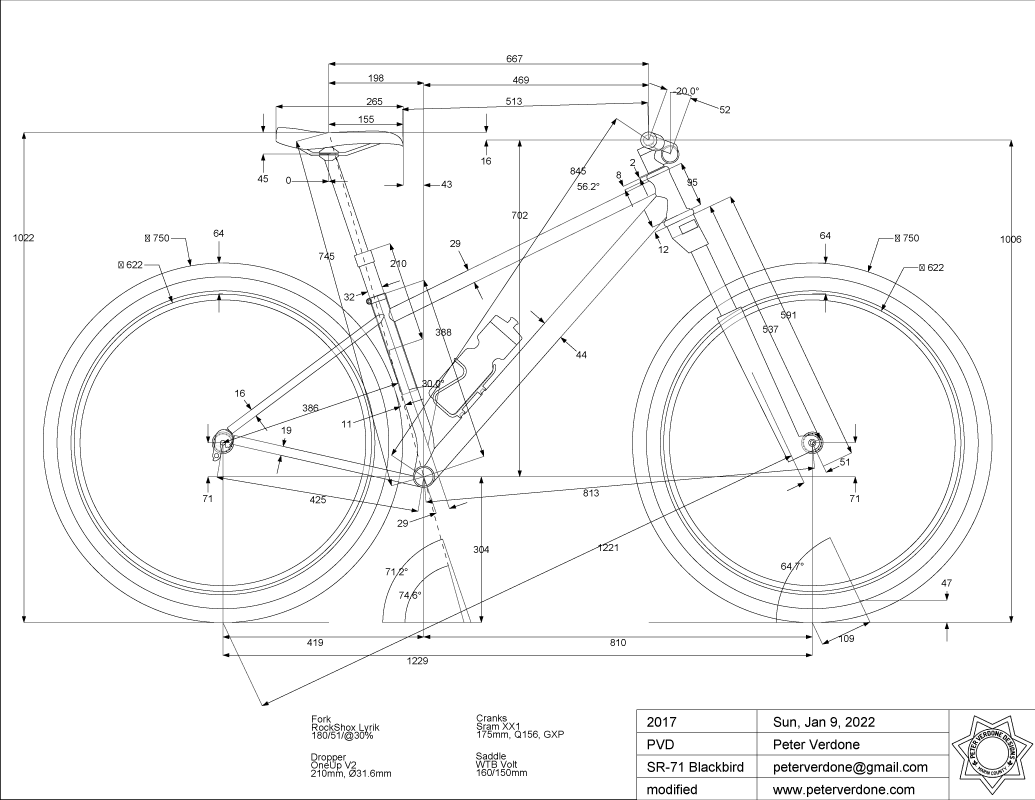 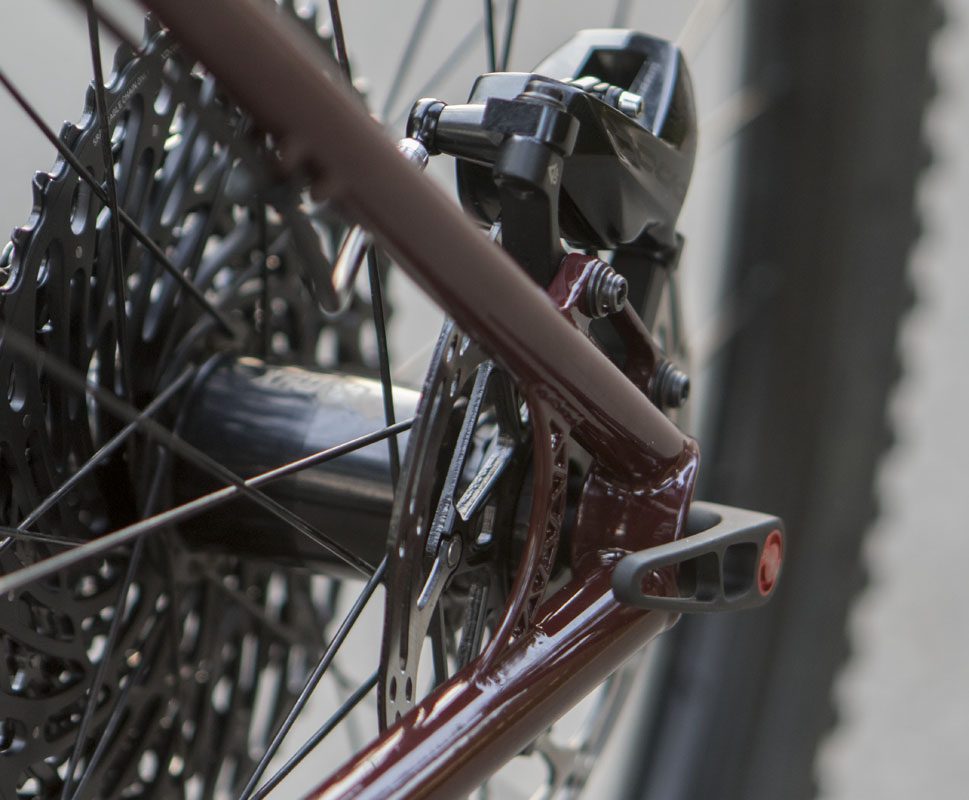 BTW, on this day, October 14th, 1947, Chuck Yeager piloting the Bell X-1 became the first human to exceed the speed of sound. 70 years ago. The Blackbirds were designed to cruise at Mach 3.2, just over three times the speed of sound or more than 2,200 miles per hour and at altitudes up to 85,000 feet. Completely insane. 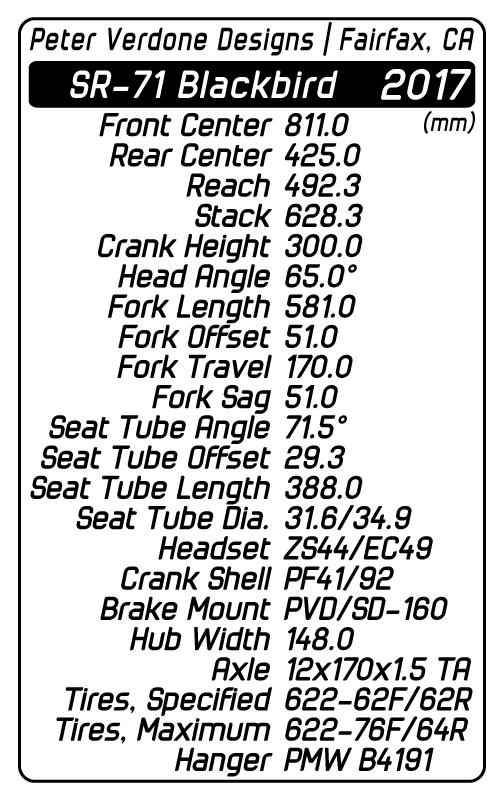