Two years ago, the Endor Flow trail at Camp Tamarancho was finished and heralded one of the biggest changes in mountain biking for our area that I’ve seen. In the two years following the ribbon cutting, local riders and riders around the country have been demanding simple to ride, smooth trail free of any rocks, roots, or challenge. The goal of most trail builders today is to build to the lowest common denominator so that novices can ride. This is assisted further with 6″ travel suspension, light carbon, and gigantic tires. It’s a different world.

The flow trail at Tamarancho does stand out as it remains challenging when ridden at high speeds. Our first annual chainless race saw some amazing riding in the top spots. The upcoming race should prove even more thrilling.

I built a bike for that new trail. I only had access to the top of the trail and a 29er hardtail at the time. I made a few guesses as to what would be needed and how to deliver it. That was the original Z-74 Flowmaster. I got really close to the perfect bike. I regretted not getting shorter cranks to lower the bike as much as I could and the stays could have been shorter. I also underestimated the travel needs at the front of the bike. Recently, I’ve been trying to learn to ride without the front brake as that may be the key to finally getting into the sub-2:40 club.

Ronen Sarig is my main local competition and a great guy. For a while he had the fastest time on the trail and came in second behind Marco Osborne in the race. He decided to build a custom frame with me for the flow trail. Proliferation dictates that I match him or better, so I built a second iteration of my bike. 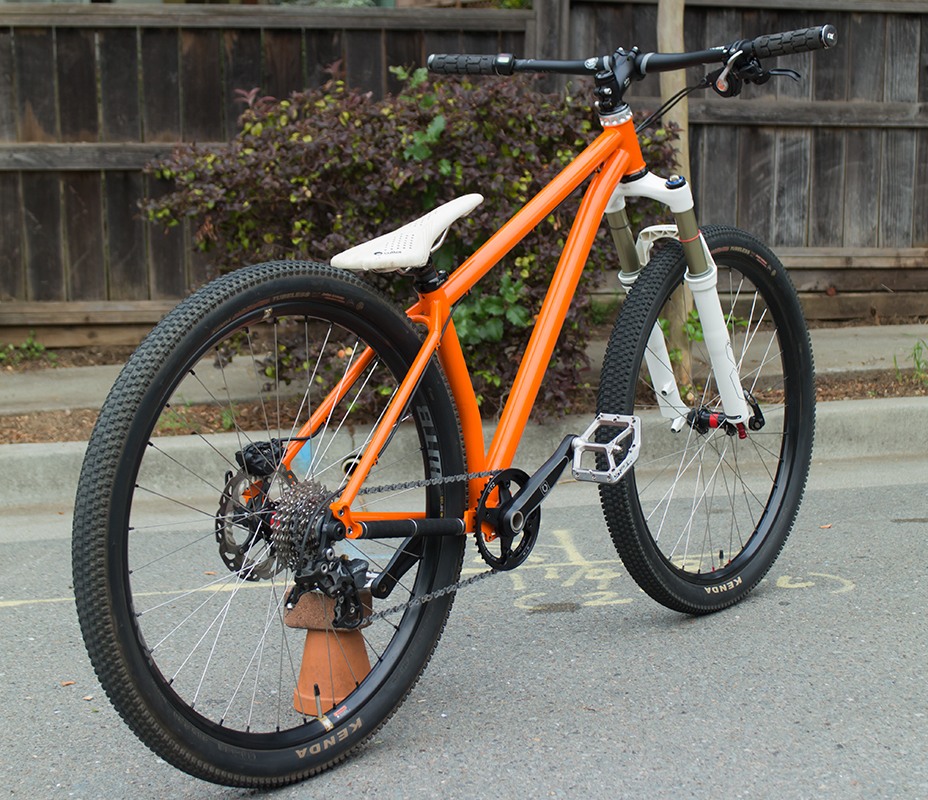 Twenty six inch wheels are really the best choice when quick acceleration on smooth surfaces are the big factors. They really are faster accelerating and the shorter wheelbases they provide are nice to work the surface transitions. I did add a 142x12mm rear mount and stiffer construction to help the bike with harder forces. The rear end feels great. 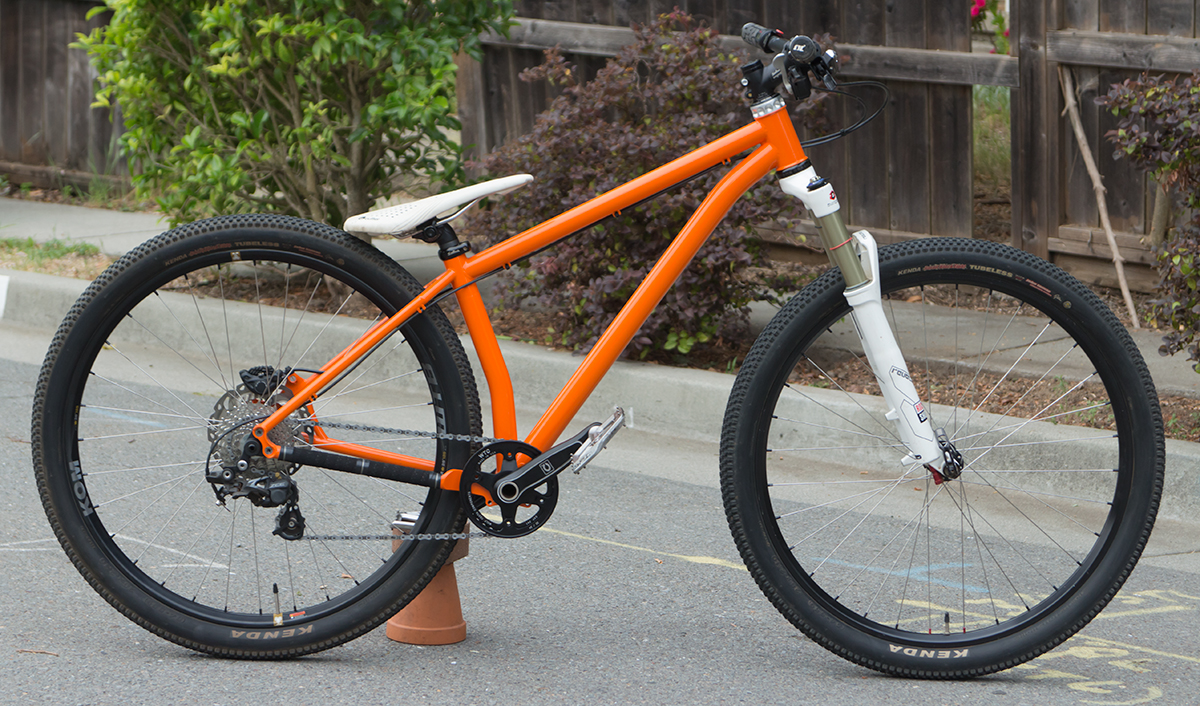 Canfield Bros. recently introduced some amazing cranks. Nothing bling, just available in lengths the big companies forgot. I purchased some 155mm cranks so I could lower my design a full 20mm from what I had previous. This is major. That these cranks are offered with the SRAM GXP direct mount pattern is just the best. I only wish they were narrower. 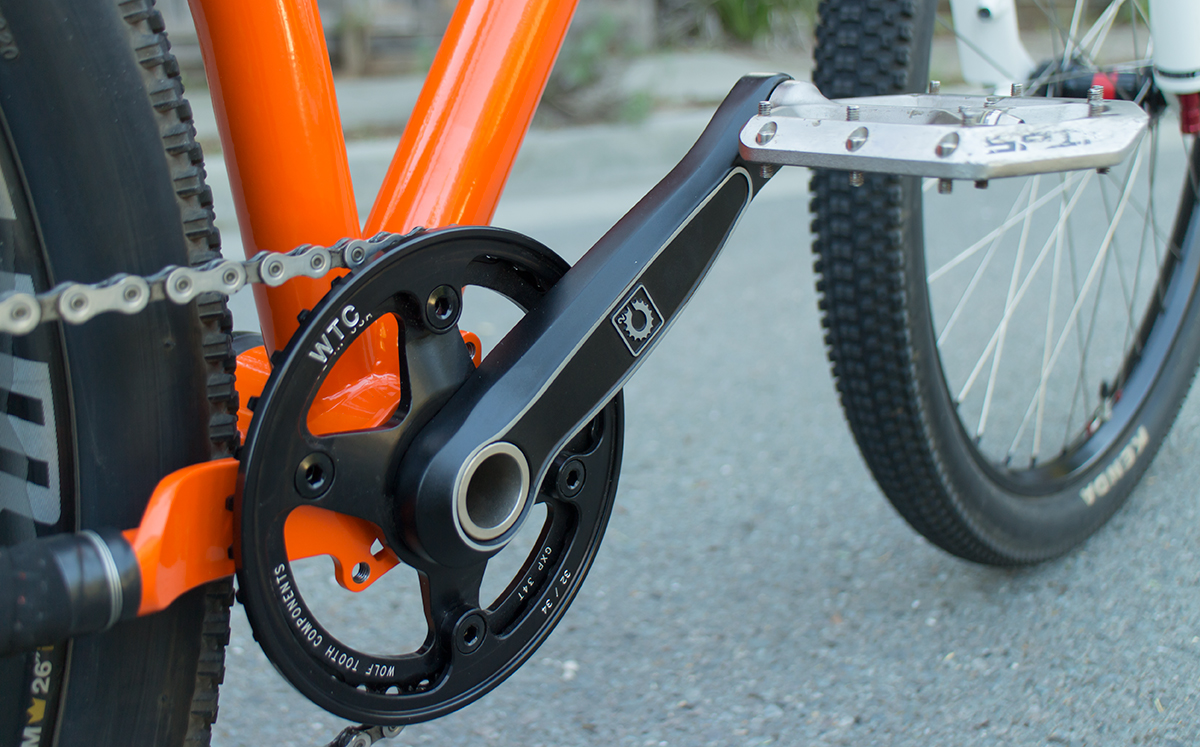 I’ve been using 36-12/30 for gearing on the trail. That was with 175mm cranks. I will be setting up with a 34-12/30 to take a little of the edge off of the short low leverage cranks. I tested with 36-11/32 gearing but the jump between gears was too wide and I had unused gear at the top. Getting up the hill is important so some range is needed.

Over the past two years, the fork grew to 110mm of travel from 80mm. The shorter travel was crisp, but longer travel feels better and is probably faster.

This was an necessary evil. I cover this on a past post for the PVD EC44 PlusFifteen. Essentially, this bike was designed right for a low, 85mm tapered steerer but my old fork has a long 105mm tapered steerer. This solves the problem when using this fork. In the future, the fork may be replaced with something nicer and allow me to remove the cup and swap the stem to a 25 degree unit. 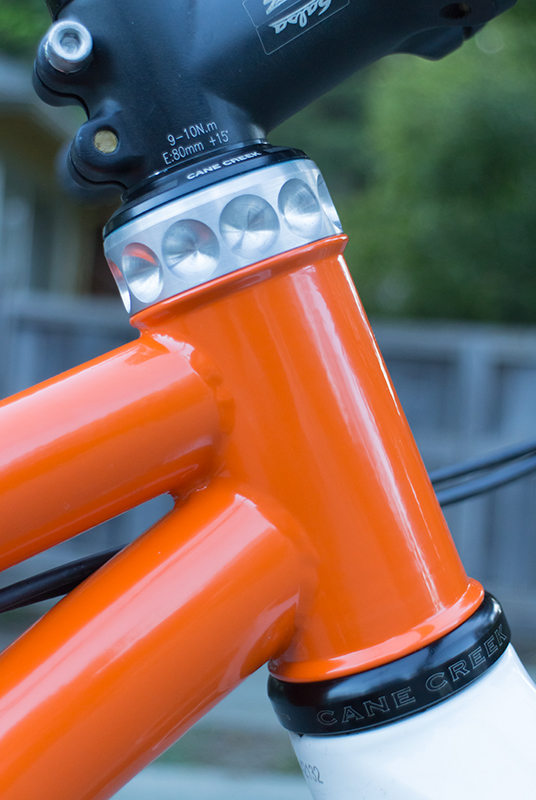 I’m not happy about the hose and housing guides on the bottom of the top tube. They should have been the Nova investment cast doubles. I was trying to use the Paragon CS-2322 weld-ons for double use but it’s not very good. I’ll be buying a good supply of the Nova units.

It’s an interesting process putting these posts together for the bikes that I put together. It forces me to really look at the bike for a long time. Making sure it’s put together right, that it looks it’s best, that it is my vision. It took some time for me to see that the old seat post was wrong. There isn’t much there so it can be unseen at times. A seat post on a bike like this has to be cut down to useless lengths so I just transferred the existing part. It was an SRAM T20 Stylo zero offset. It just wasn’t right. It needed an offset and I was lucky to have on hand a cheap Giant Contact OEM 25mm offset post that would be perfect to cut down to 100mm. It’s design allows it to be put very low to the frame. You will see the difference in the photos. Such a change that I included photos of the bike from prior to making the change that would show.

I liked the look of the cheap Dimension binder that I was using. During the seatpost swap, it snapped. Not the best design and cheap metal. I replaced it with the super solid and utterly proven Salsa Lip-Lock 35mm binder.

The Print: (fork topped out)