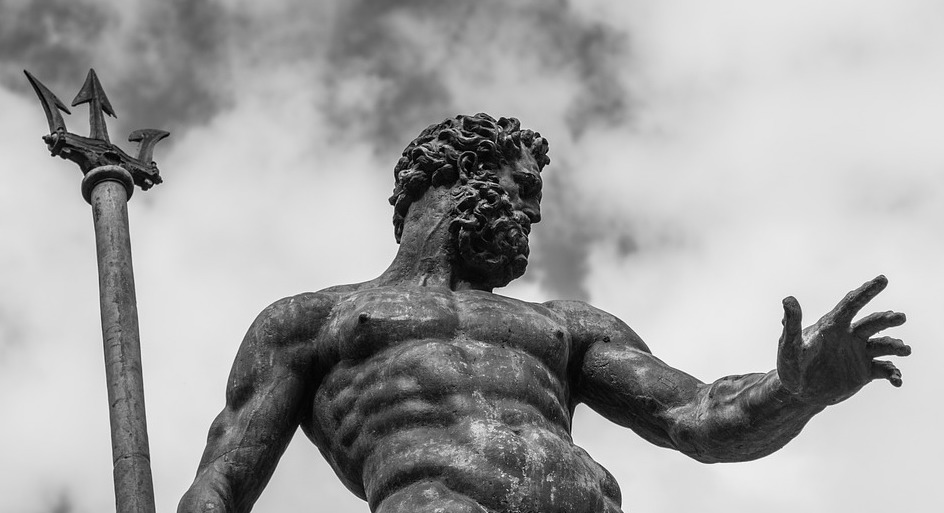 I live in a world divided into small fractions of a millimeter. Often, I spend a great deal of time freeing up just 1/2 of one and feel like a conquering hero. It is my struggle.

I was recently sourcing some forks for the all-road bikes that we are about to do. It had been a while since specifying particular forks for this type of bike and I needed to know if anything had replaced the Dedacciai F-56 (ADK AFK056) fork as the ‘go to’ fork. 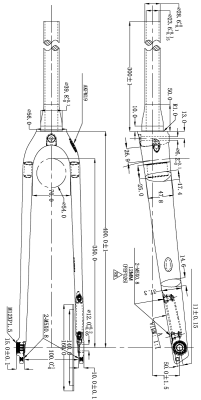 I’ve used the Deda/ADK fork in all kinds of conditions and on a few bikes, from longer road miles to aggressive downhill singletrack. It performs very well and has clearance for real 622-50 tire. It would be nice if it had a little more vertical flex and a little more tire room. Still, good enough is better than crap.

Over the past few years, I’ve seen my use of the all-road platform drift to decidedly to dirt and especially trail use. A shift to a ASTM 3 (MTB) rating would be a little safer than a fork rated ASTM 1 (Road). This works against me a little when looking for more comfort in the fork but running 45-50mm tires has helped there quite a bit.

There are really some terrible forks being sold for this class of bicycle. There aren’t many good forks to consider. One issue that still has yet to be addressed in the all-road market, that I discussed several years ago, is specifying the wrong front hubs for these bikes. We are stuck with 100×12 for now. This is a real shame and obvious. It’s criminal really.

A newer fork released by Whiskey (QBP) is the No.9 MCX. This is a relatively decent looking fork with clearance for real tires. I don’t like all of the stupid bottle cage mounting on it as it makes the fork a real mess but other than that and it not having proper hub spacing, it looks usable. In checking into it deeper, I came onto something that I would share.

This gets us to the point of this post. How we describe forks.

Forks are described within the geometry of the bicycle with the length (axle to crown) and the offset (rake). The rake is the lateral shift from the steering axis that the axle takes. The length is the distance from the crown race seat (bottom of headset) to the axle ALONG THE STEERING AXIS.

We do not use the direct distance (hypotenuse) of the axle to the crown race seat. This is not correct. Why? Because it is not the most simple or obvious description of the system. Measures on the front end are made referencing the steering axis.

Here’s a good explanation as to why this is so. If we are working with motorcycles (or downhill bikes) and have fork stantions in triple clamps, we may make a chassis adjustment by moving the fork position in the clamps. Raising or lowering the front of the bike using this method is common in high performance situations. If we are measuring the fork length along the axis, we just add or subtract the change in position from the fork length in our setup sheet. The rest of the geometry can be easily calculated from there. If the fork length is measured directly, this is made a lot harder, more confusing, and makes no sense in the math or description of the geometry. If the geometry is needed to be understood at a specific point in the fork travel, which almost  universally moves parallel to the steering axis, the calculation can be made by subtracting this travel from the length. It’s just obvious that fork length along the axis be used.

Here is an example of a very common formula used by cycle designers. Note how fork length is used in it. A hypotenuse measure of fork length would involve a redundant use of “fork offset” in the formula. It would also really make a mess of this. The math really does point us to the right method. 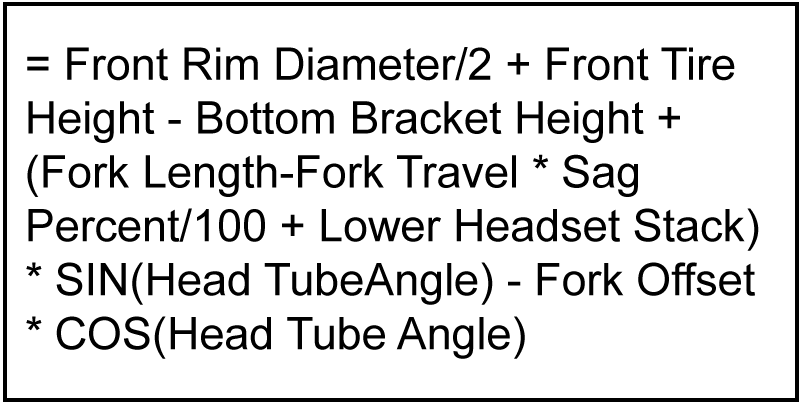 I challenge anyone to produce a more elegant form of this formula, even more if the hypotenuse measure of fork is used. I don’t think that it can be done.

Also, the offset of the fork will (almost universally) remain unchanged on a suspension fork as it moves through it’s travel. As  this is a measure taken at a right angle to the fork axis, it would follow that the length would be taken in the same co-ordinate scheme. Measuring one of these parameters is done at the same time as the other. Occam’s razor, bro.

Both RockShox and Fox list their fork geometry as I do. Every other builder I know does the same. It’s how it is done. Providing measurements another way should be flagged as it is entirely different than what everyone else is doing. Here is a print that Fox provideds to users and a document that RockShox provides lists the measure in the same way. 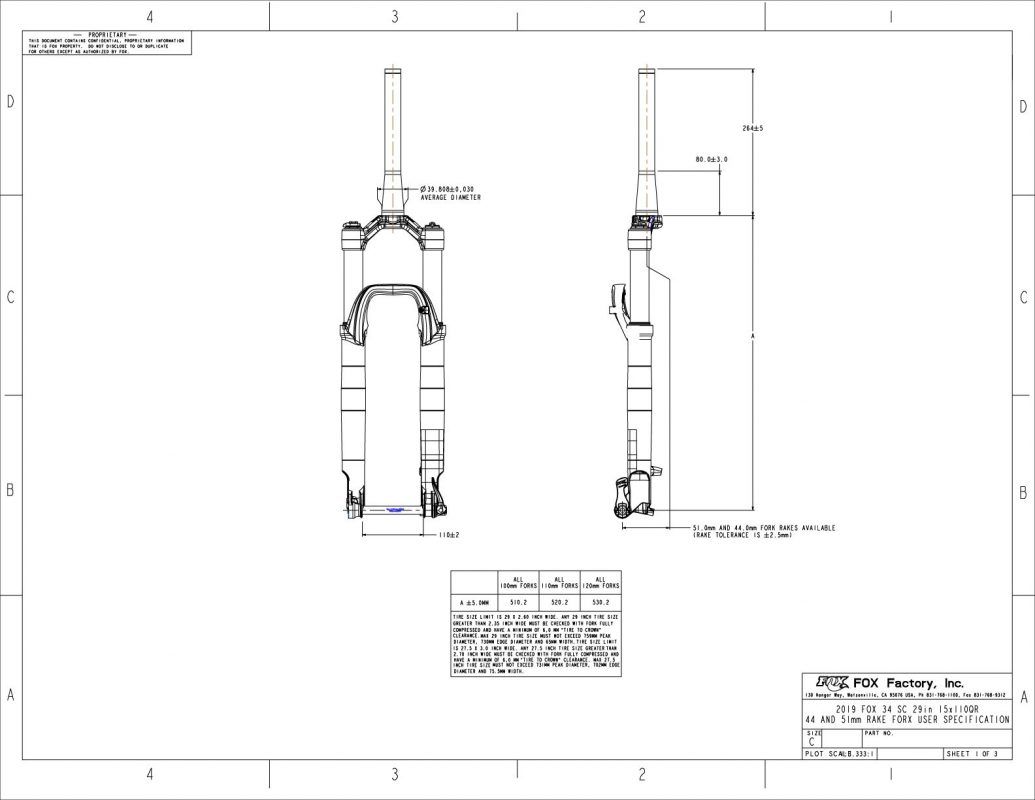 What I learned the other day when talking with the folks at QBP is that all of the fork lengths across all of their brands (Whiskey, Salsa, All-City, Surly, etc.) are reported as a direct measure, hypotenuse style. This isn’t made clear or obvious. This is important to know. Many people use the QBP forks in their bike designs and are surely building an error stream into them. Not cool.

Thus, the Whiskey No.9 MCX that I’m looking at that is described as being 415mm x 50mm is actually 411.98mm x 50mm. It seems like a small distance, 0.7% of the total length, but like everything on the bike, we need to be accurate and as precise as possible if we expect to be making adjustments that are meaningful. This 3.02mm difference in the length of the fork, if used in the stead of the designed measure of 415mm, would result in a 0.9mm lower BB, 0.9mm shorter front center, and 0.1 degree steeper head and seat angles than expected. There are other changes that happen in other parts of the bike. This is a small amount but when added into all the other deviations that occur in production, will make it even harder when attempting to validate a bike in the tuning environment.

This issue has nothing to do with the end product. The forks themselves may or may not be excellent and none of what I say here has anything to do with that. What I wish is that they describe it’s geometry clearly and accurately, preferably as everyone else working with bicycles does. 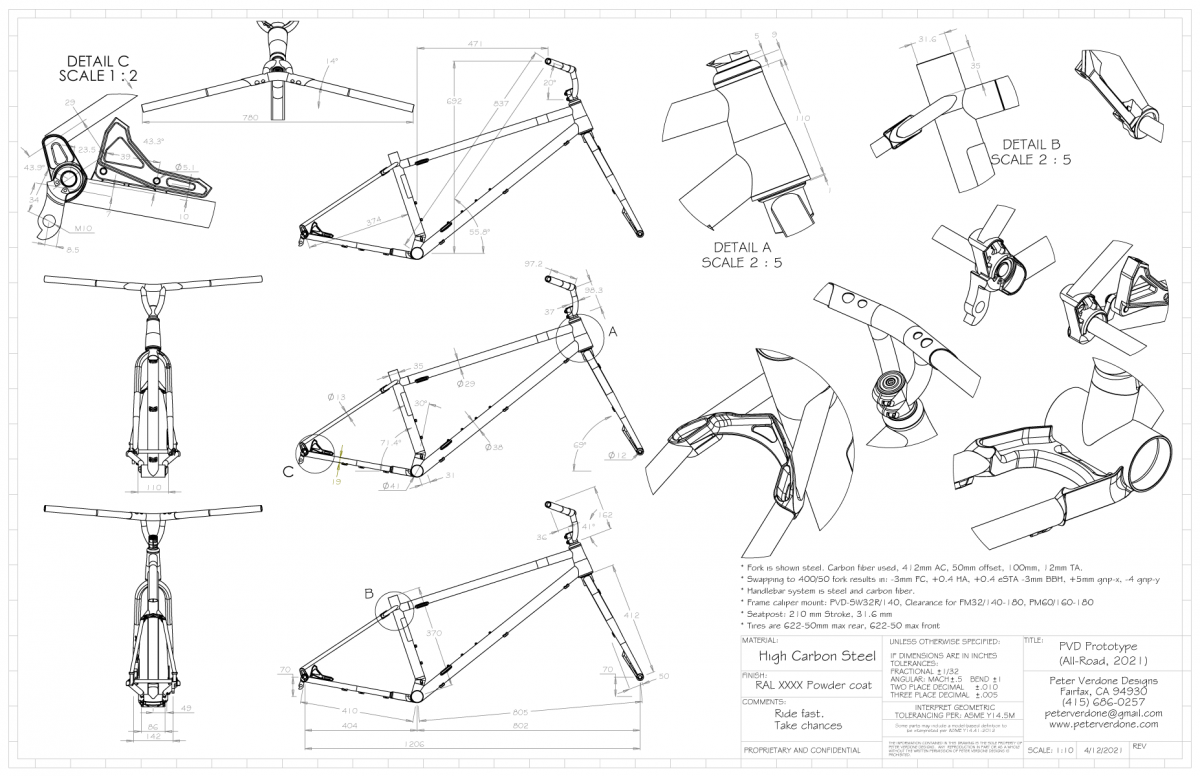