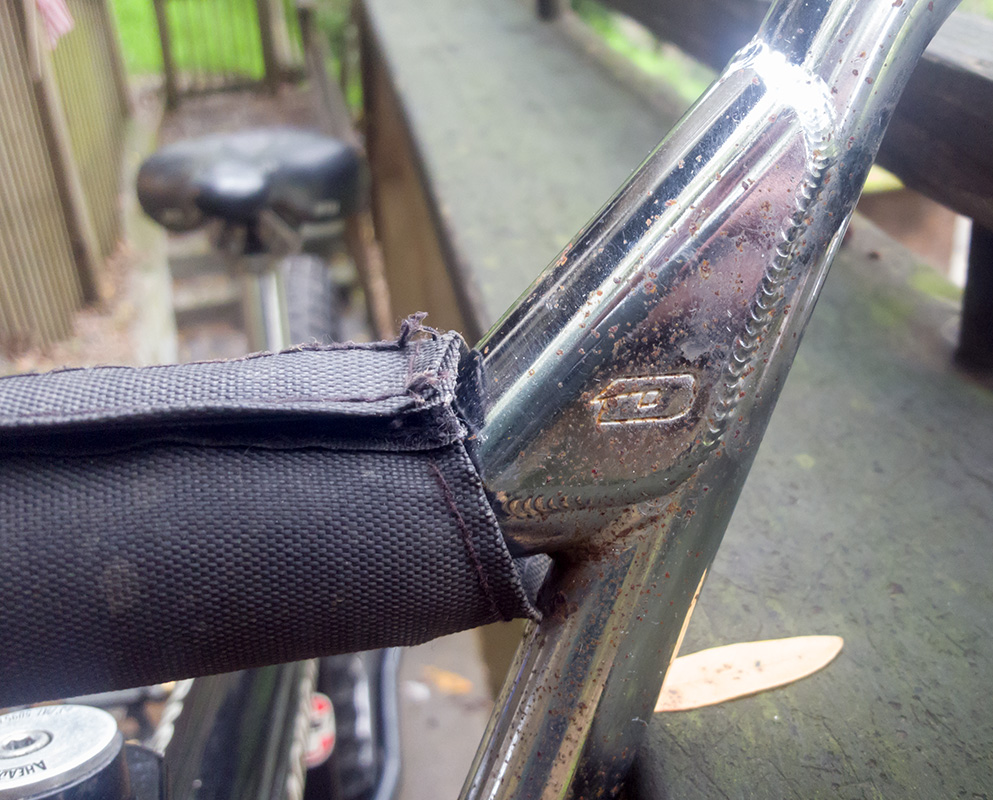 I was young once a long time ago. I used to be more driven than I am now. It’s harder these days. I’m not as punk as I used to be. I just try to do my best.

Today is a rainy day and a good one to get this old bike fully measured for the files. While I’m not much into nostalgia, I do have some toys laying around that seem to hold up to the test of time…or at least it seems so. My Bontrager B29 is one of those items. It is a 24″ BMX bike built by Trek in 1995 just after they took over the Bontrager brand from Keith Bontrager. In Santa Cruz, Bontrager had been doing some late prototyping of BMX bikes just before the Trek buyout and this was one of the fruits of that. They also made a 20″ version. I don’t know if these saw any real racing results but they are great for non-race use. 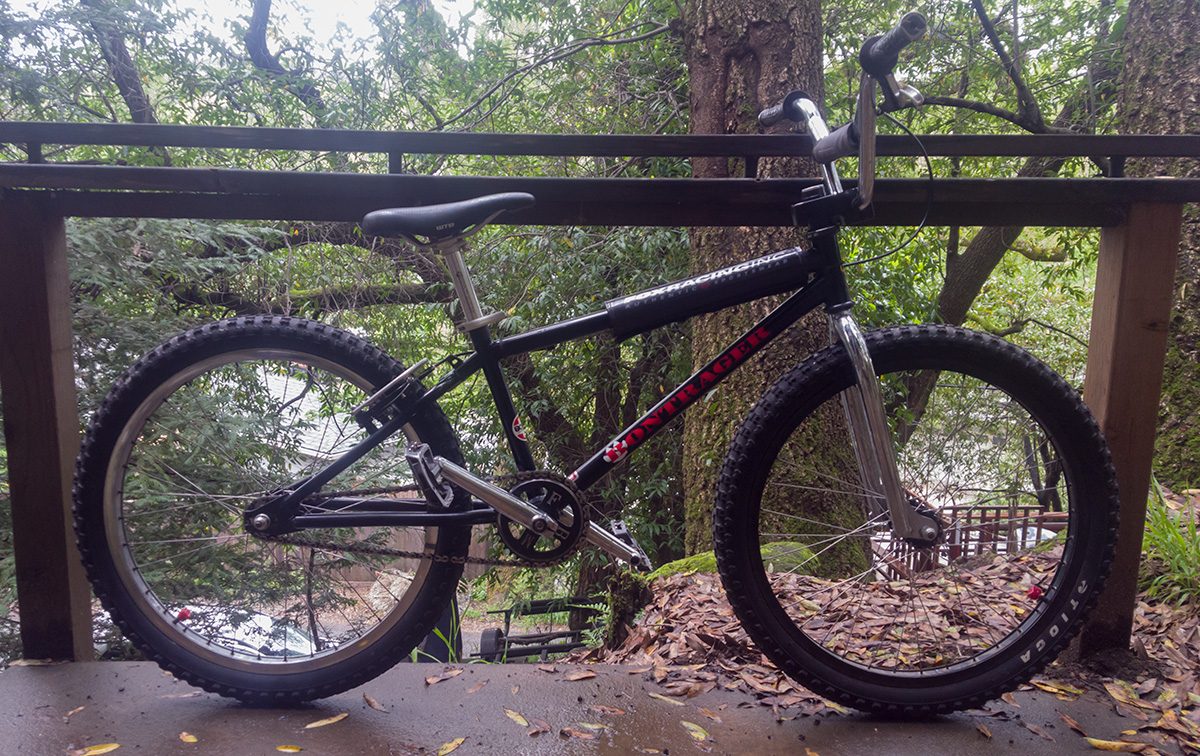 I have fond memories of ripping around Cambridge, Somerville, Boston, and San Francisco on this bike. It was a real hooligan bike at the time. Not a stunt bike. Just a go places and slash on the way kind of thing. Jumping over and off everything, riding over picnic tables, and drifting corners down the infamous hills of San Francisco…and lots of beer…and dope…and more beer. Cheap $15 BMX tires make drifting corners a lot more fun that on $80 knobbies. I also did plenty of singletrack rides on this bike, too. Even a fridgid (5°F) New England winter snow ride at night with a headlight battery duck taped to the down tube (Thanks Phillip Keyes) but also lots of goofball singletrack rides in Novato and China Camp.

While this frame was built by Trek at a time when Trek wasn’t the quality brand it is now, the construction quality and design of the frame is excellent. It looks like great work to this day. It may not be super light but it is a nice bike. The frame and fork are made of custom butted 4130 True Temper tubes. The massive 7/8″ chainstays and 3/4″ seatstays made for a solid rear end when other BMX crusiers were (and most still are) pretty flimsy. It also has clearance for a real 24×2.125″ tire front and rear whereas most bikes in this class would only fit a 1.75″ tire on the rear. I wish that the dropouts were nicer but they are on par with what most BMX bikes would have. I’m just spoiled. I just feel that the rest of the frame is so nice that the dropouts should have matched.

That all said about the frameset, ALL of the OEM parts that came with these bikes were absolute garbage. Real trash. I feel that with some effort by the product manager these bikes would have been more successful in the market than they were. This bike still has the OEM seatpost and headset. I’d like to replace the headset, it’s pretty lame. Everything else was swapped out over time. 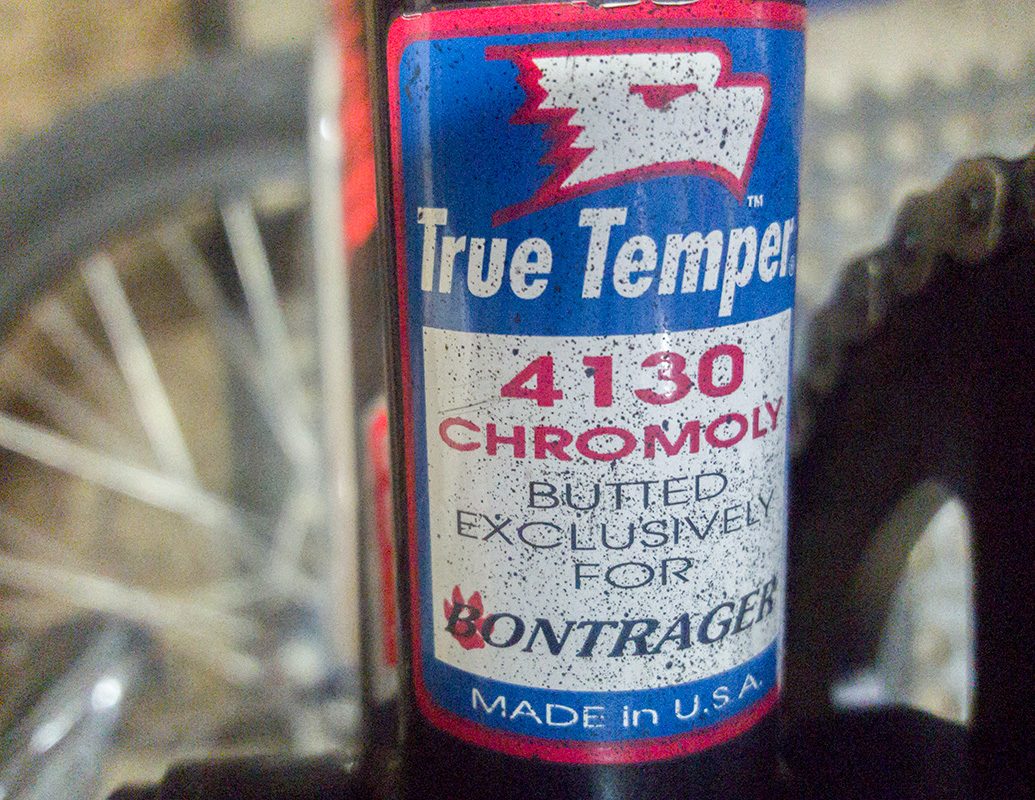 Back in the day, we needed to use braces (boosters) on cantilever brakes because the clamping force against the rims would overwhelm and push the stays apart, especially when using v-brakes and Shimano Servo-Wave brake levers. This produced poor braking power and modulation. The braces made the system strong and crisp. Weight weenies didn’t use them but go the fast guys did. It was important enough with just one brake that I needed to make the arch seen here. If I remember correctly, the super sick DKG Strongarm Brake Bridge didn’t fit. A few years later, the era of discs began and this stuff wasn’t important any longer. 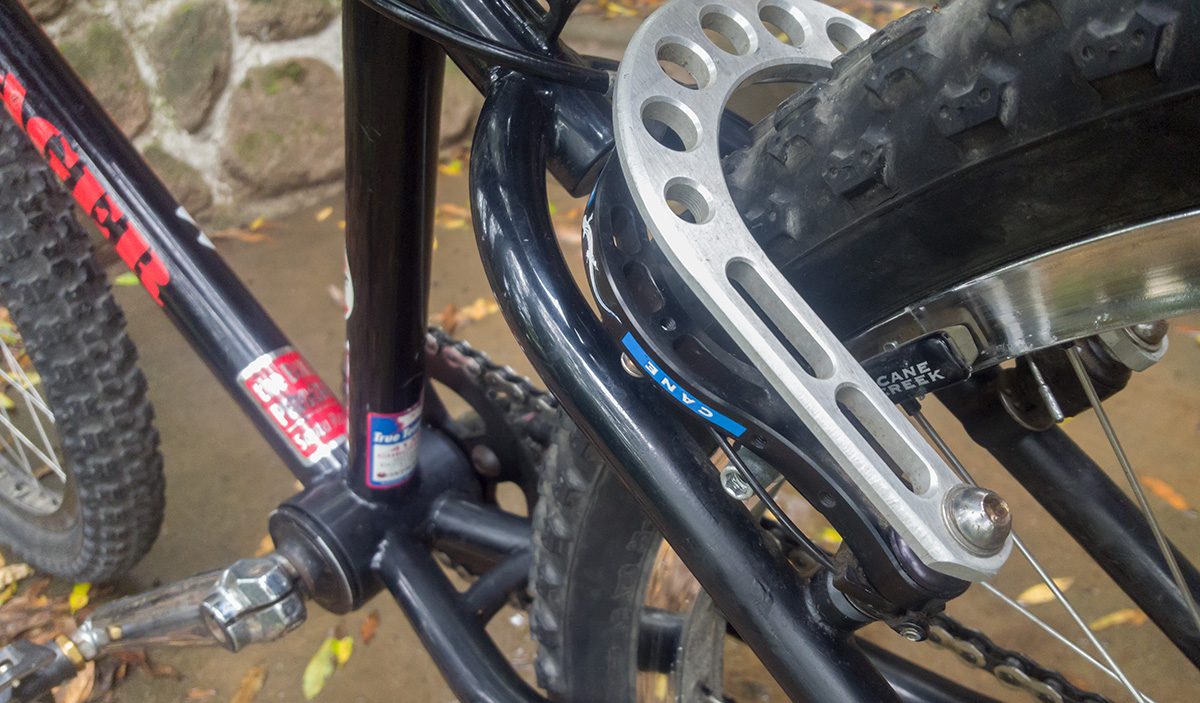 The DKG seat QR was custom machined by me to fit the 1 3/16″ top of the externally butted seat tube. It was nice to really drop the seat out of the way and things were crazy.

At some point in time I cut the stock brake bosses were cut off the frame and Paragon BK2020 brake bosses were welded to the rear of the frame. I really can’t remember doing this so either I did it or a friend did it for me. Someone at Independent Fabrications may have hooked me up or something else. One things for sure, these are the right way to mount a cantilever brake.

The 690mm x 180mm Dyno handlebars were trash picked from a dumpster when my neighbors moved way back when. They are a great design. They worked perfect for the bike. They used to be wide. Now they are narrow. An updated version should exist!

With my new 29er BMX Klunker in development, I wanted to look deeper into this bike before I went further forward. I’m not looking to replicate the Bontrager. I’ll be building something far better. It’s just good to look at my own references to understand them. 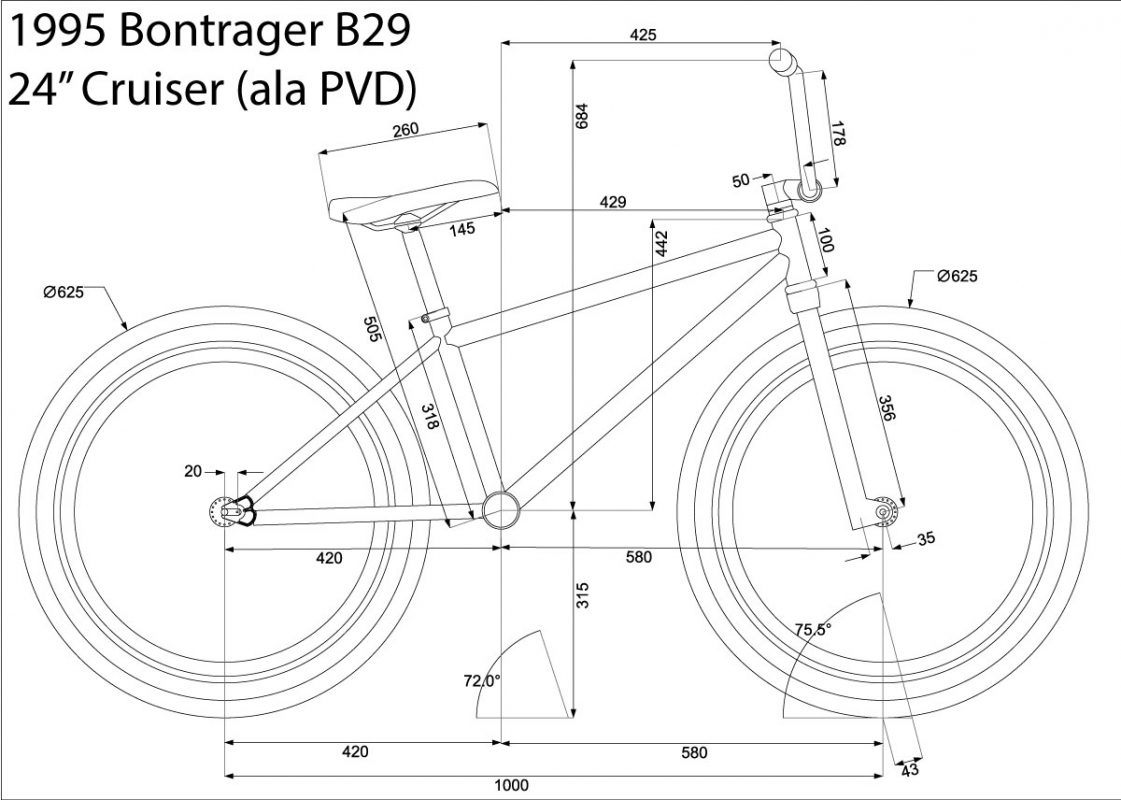 I really haven’t ridden this bike in a very long time. It’s been rusting in the garage for the past decade. I’m hoping to polish the chrome up before putting it back. It stands as I last rode it other than the beater pedals. Ridden hard. Put away wet.

It’s funny how the narrower bars feel in my hands now. It’s even more odd comparing it to the Flowmaster.

It occurred to me today that this bike is still with me over 20 years. That’s pretty legit in terms of time. I wonder when it will find a new home?

POST: I’ve been informed by Marko Salmon that there existed a very rare B29 PRO XL version of this bike. It has a 625mm front center over the standard 580mm that I have. The rest of the dimensions appear to bet the same. 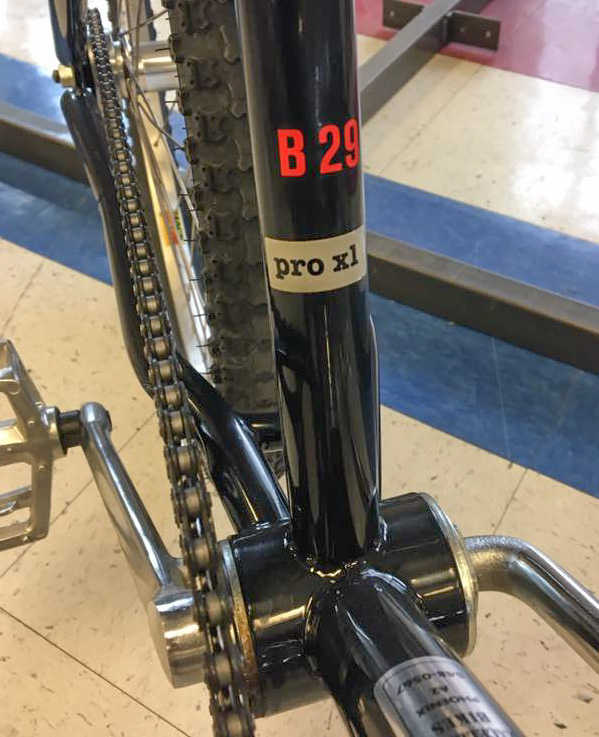