I’m a Shimano fan. Some things about Shimano just can’t be argued; they make the best brakes, pedals, and cranks….PERIOD. I’m also a big fan of RockShox forks, Truvativ stems, posts, and bars. My big problem is that lately I’ve been buying SRAM cranks. Sorry, I do love Shimano cranks.

Many years ago, Shimano introduced a line of MTB cranks with removable spiders. These replaced the older fashion technique of forging the spiders with the crank arm. This made the singlespeed and DH racers quite happy as they could swap out a clunky triple spider for a single ring directly mounted to the crank.. In a few years, they dropped that concept and began (until this day) cranks with separate spiders permanently fastened to them. I’ve always felt that it was a mistake that they didn’t stay with this design and many people will agree with me. 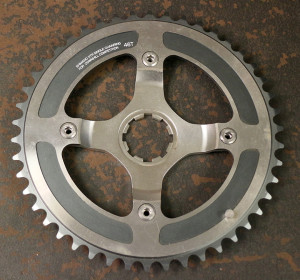 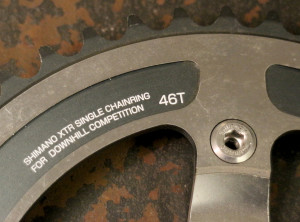 SRAM began producing cranks with removable spiders a few years ago and it has turned into a boon for them. While their crank arms(in my opinion) are inferior to Shimano’s with regard to weight and strength (given Shimano lacks a carbon mtb crank), the ability to reconfigure the use of the crank has been the great force along with their cheap price. All this despite the complete failure of the 120/80 bcd interface to take hold. Now, when I buy a crank, I choose the option of crank arms and rings/spider I desire even knowing that the two will end up on different bikes. 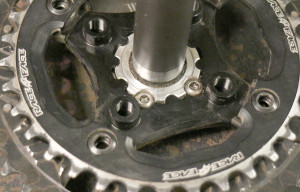 As I do a lot of special setups, messing with the spider has been good for me. Recently, I’ve been trying to get some cyclocross gearing sorted for my new bike. A nice ramped and pinned 42t big ring with a 34 small ring. A 46t ring is impossibly big for most CX races where I live. God knows why people settle for such horrible gearing. This leaves a lot of range left on the table that could otherwise be used. For example, one super fast guy I know runs 40/11-28. He says that he’s never spun it out in a race and he’s a very fast guy. Telling, eh?

The key to all of this fancy stuff is the SRAM S952 crank. It’s a proper road disc crank as it is narrow in Q but designed for 73/135 drivetrains. It’s removable GXP/X0 spider allows me to cross over to the mountain bike world for gearing as well as the 130 bcd world for very fast stuff. Thus, I’m running a real road crank on a disc bike with the ability to use virtually any chainring. Awesome.

I had wanted to just swap out the 46t of a 110bcd crank to make it happen. Almost nothing exists to do that, though (soon. See WickWorks ala Katie Compton). Blackspire does have some 110 options. Then I tried getting a custom 32t 80 bcd ring made via Warhawk Industries. It just shipped after 5 weeks without confirmation. I’ll update this page when I see the part. I’m really not happy with the customer service these folks have offered. I’m hoping their product is better.

In the end, I spaced out a 104 bcd 42t Shimano ring (10spd) to a 34t Race Face DH ring. It’s working well enough but not as nice as the 110 or the 120/80 solution would be. I wanted the chainline inboard to shift real  nice though the range. I tested on the NSB spider but have moved to a Gamut 1x spider to get just a little more inboard. It’s a nice super solid setup as it’s only a eight tooth jump rather than twelve. Some SRAM DH chainring bolts (12mm nut, 8mm bolt) hold them together with a 2mm spacer between the rings and a 0.6mm spacer supporting the outside. This results in perfect chainring nut spacing. The chainrings themselves are spaced just shy of 8mm to try to get rid of a slight downshift lag. The resulting chainline (45.75mm) leaves the chain perfectly centered over the cassette. That with 152mm between pedal faces.

What’s very cool about this setup is that on fun rides in the dirt that will justify the use of this bike, I can quickly swap over to a 32t small ring for getting up hills nice. 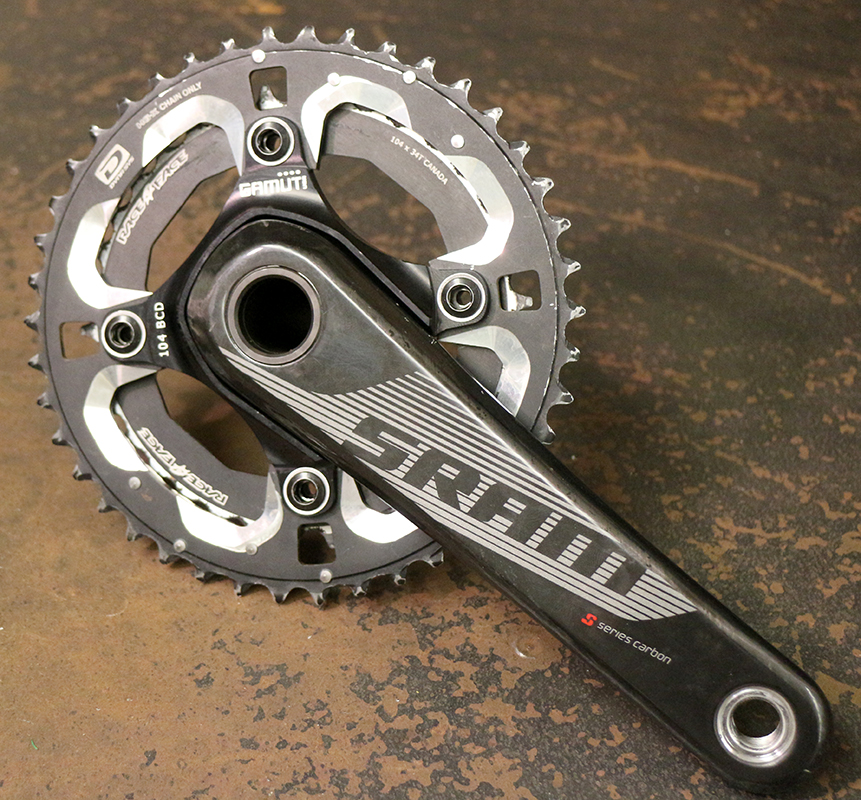 X0 vs X9 spider – This is primarily a cosmetic consideration. X9 cranks are made of aluminum and are smaller than the carbon that X0 cranks are made from. If you want looks, get a spider that matches your crank. If you want compatability, get the X0 as it will work with anything.

10spd vs 11spd 110 BCD – The offset from the crank face on both these configurations is the same as is the tab thickness. The difference between the two is the clock of the spider. This makes exchanging rings between the two problematic.

GXP vs BB30 – The only difference between the two is the spacing from the face to the crank. As the two cranks are different, interchanging between the two can result in adverse chainline problems.

Addendum: My only problem now is finding the motivation to get in at least a single CX race this season. Last year I did the whole Prestige Series as I wasn’t up to real mountain biking yet (early recovery). Now, in good health, I find that it’s always a better day riding singletrack than rolling around some parking lot somewhere. There’s still time. We’ll see. At least my bike is super rad.