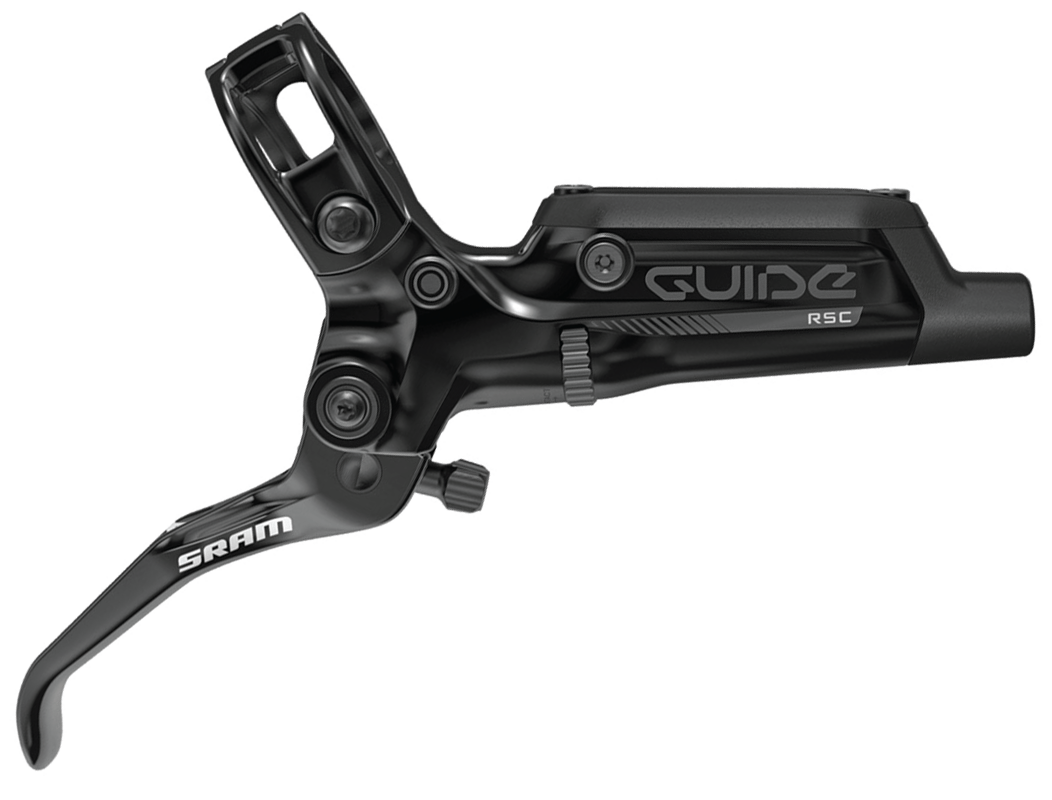 What Happens when you put mineral oil (HSMO) in a set of brakes designed for DOT fluid?

A lot of people have been talking about how nice the new SRAM Guide brakes are. About how these quad-piston brakes seem to work almost as well as Shimano twin-piston brakes. For years, Avid and SRAM brakes were some of the worst brakes you could use on your bike. Shimano always had better brakes and serious riders always chose them. After the worst models ever, the Elixer’s, SRAM went back to work in a serious way and came up with Guides. Brakes that actually….worked. I’m always keeping an open mind so I was looking to set some up on my bike to see if this were the case.

I have one real problem though. I don’t like working with DOT fluid unless I have to (motorcycle, auto, aviation). Since HSMO works just fine for bicycle use and I’ve been using Shimano HSMO brakes since their release, my shop is fully set up for HSMO. I use virgin oil in my brakes. Waste oil from bleeding or suspension work get’s re-purposed as chain lube and almost no fluid ends up in the waste stream. So eff’n eco!

It’s also a pain to have DOT around. It’s always got to be fresh as it absorbs air moisture over time. It’s horrible for your skin and paint. It also has to be disposed of completely separated from all my other oils. That sucks and I don’t want that.

Search the internet for what will happen if you use HSMO in DOT systems and you’ll get a lot of advice from people repeating what they’ve heard. Everyone is very strong and vocal about not doing it but nobody seems to really know what happens because they’ve never actually done it. Seems sane enough but I’m not satisfied by here/say and faux-wisdom.

It was due time to find out for myself. PVD on the hunt!

“Brake fluid means a liquid designed for use in a motor vehicle hydraulic brake system in which it will contact elastomeric components made of styrene and butadiene rubber (SBR), ethylene and propylene rubber (EPR), polychloroprene (CR) brake hose inner tube stock or natural rubber (NR).”

“Hydraulic system mineral oil means a mineral-oil-based fluid designed for use in motor vehicle hydraulic brake systems in which the fluid is not in contact with components made of SBR, EPR or NR.”

“A silicone base brake fluid (SBBF) is a brake fluid which consists of not less than 70 percent by weight of a diorgano polysiloxane.”

Let’s get to work!

Because I wasn’t interested in any fluid mixing effects, I ordered a full set of SRAM Guide R brakes as separate pieces so that they would be dry. I would have full control over what went into them.

Of course, I used the finest HSMO available, Pentosin CHF 7.1.

Installed the brakes and bled them to perfection. 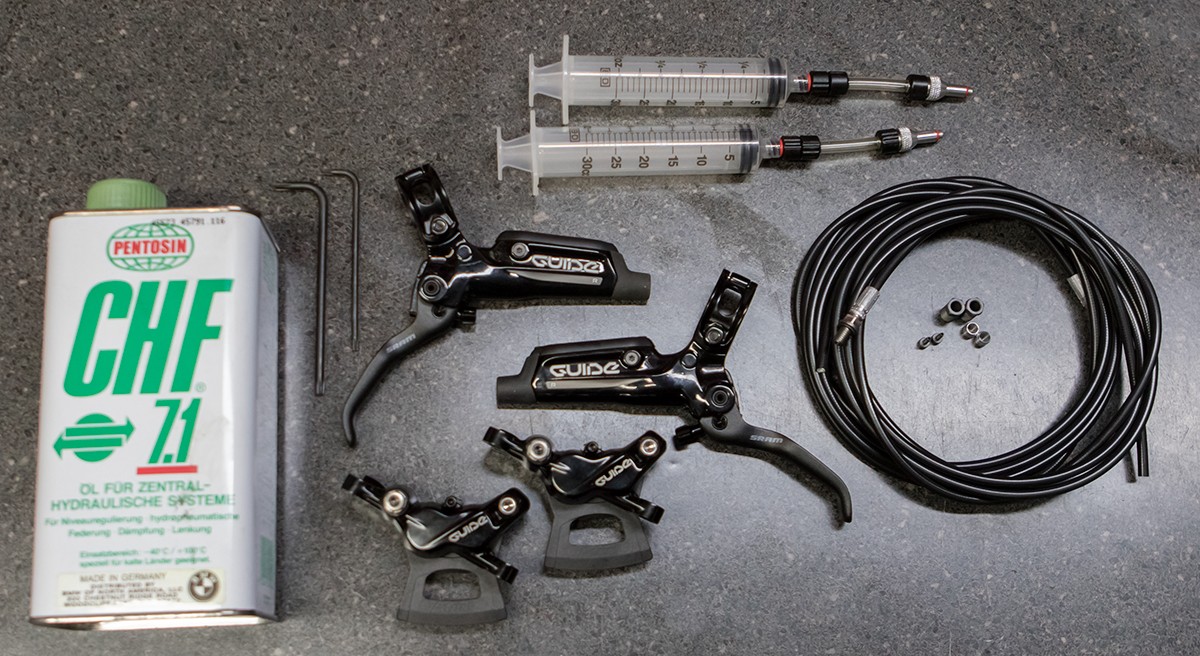 Here’s the official word about putting HSMO in DOT systems: DON’T EVER DO THIS!

Within 12 hours the seals had all swollen enough that the system barely worked. Within 18 hours, it was dangerous. Over then next few days it got a little worse but function was essentially ruined.

Here’s a nice little video of the results. Never say that PVD never gave you anything.

Sorry, the Guide master is a toy compared to the Shimano Saint lever. It feels cheap and it’s so bulky. The adjuster screw might break just fiddling on the workbench. The lever feels like a disposable plastic spoon. Yuck. 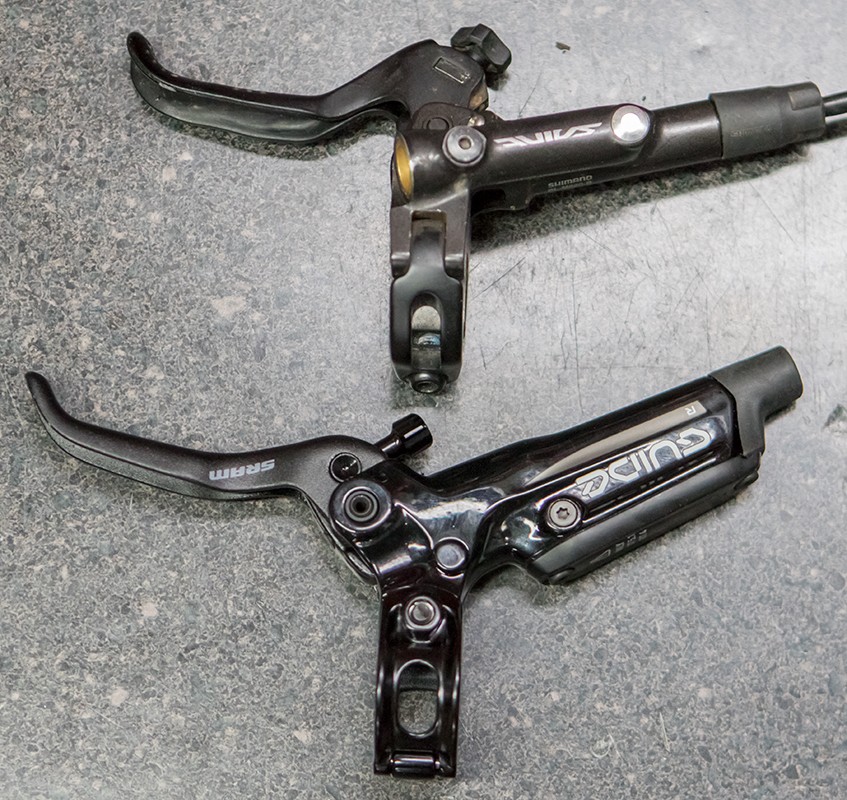 I really like the look of the Guide slave. It needs some cooling fins on the pad but it’s a very refined little part. Good job! 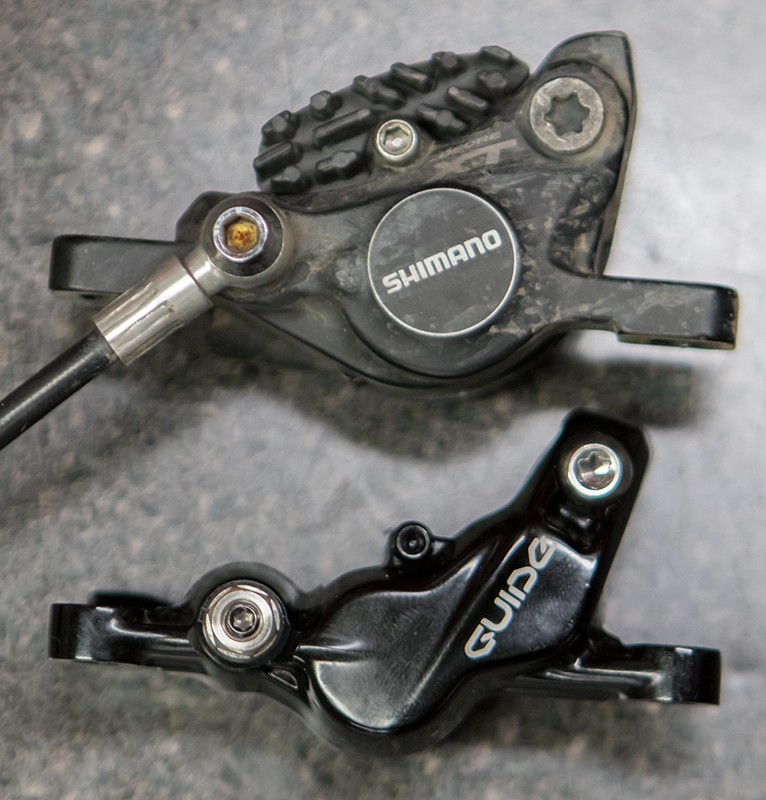 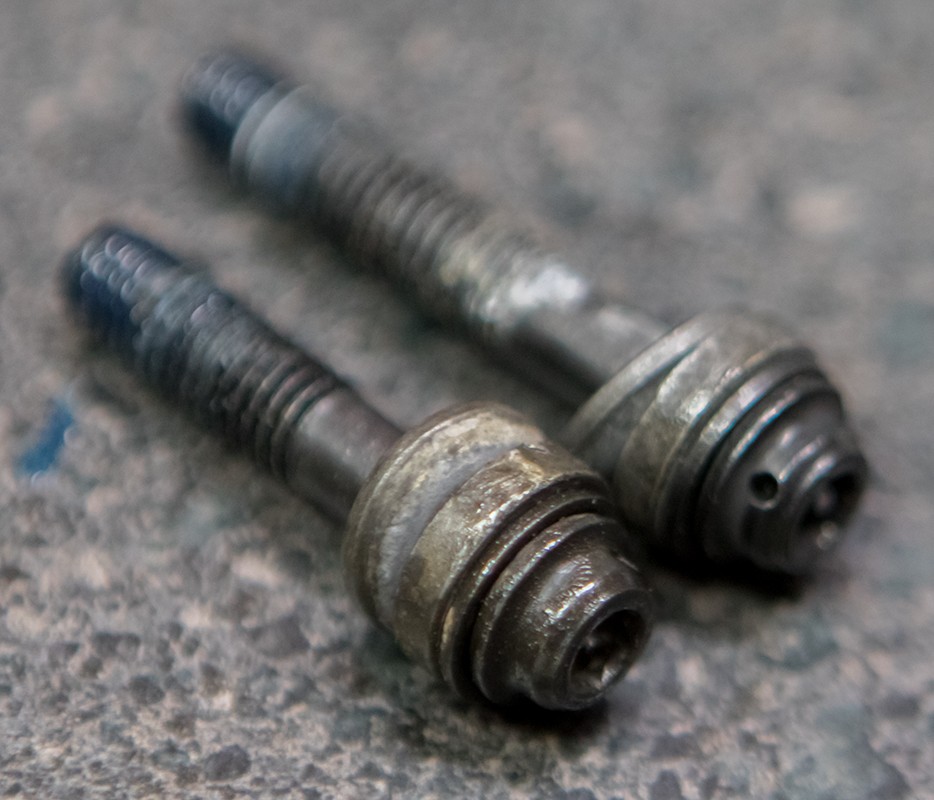 If this bothers you, remember, it’s not that big of a deal. SRAM sells full service kits for both master and slave ends of the system and all will be right as rain in under an hour. Easy. 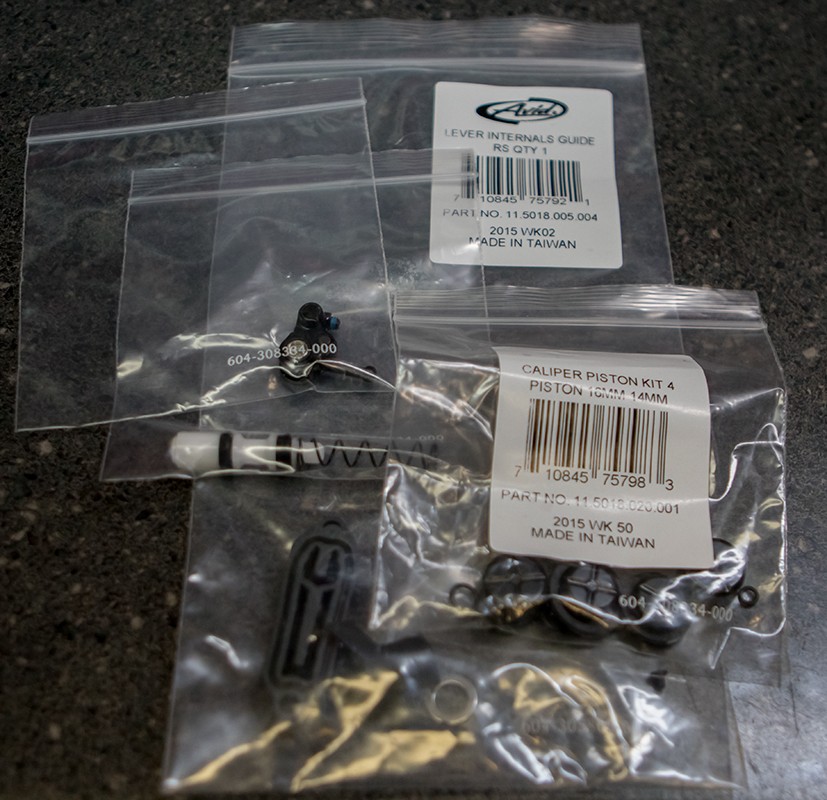 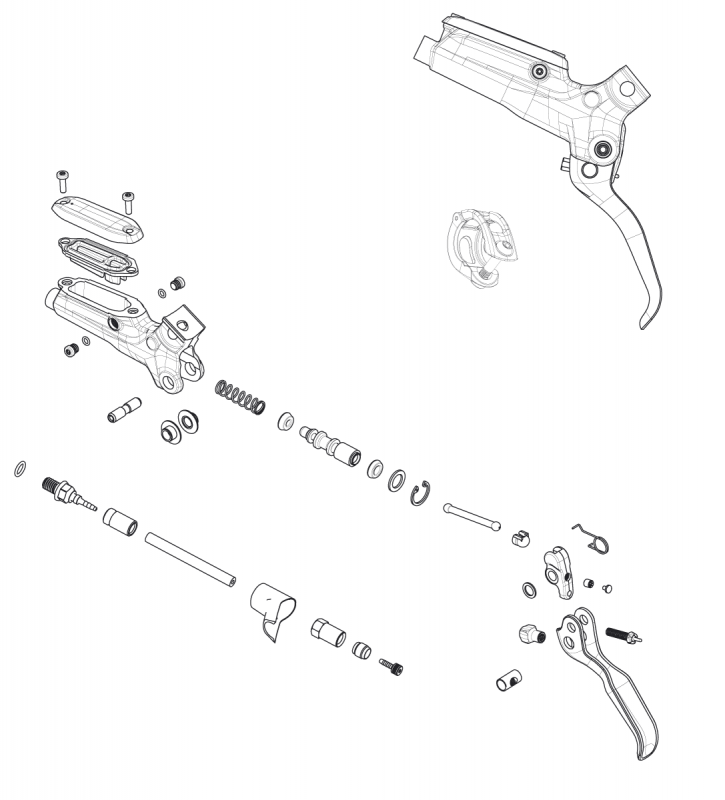 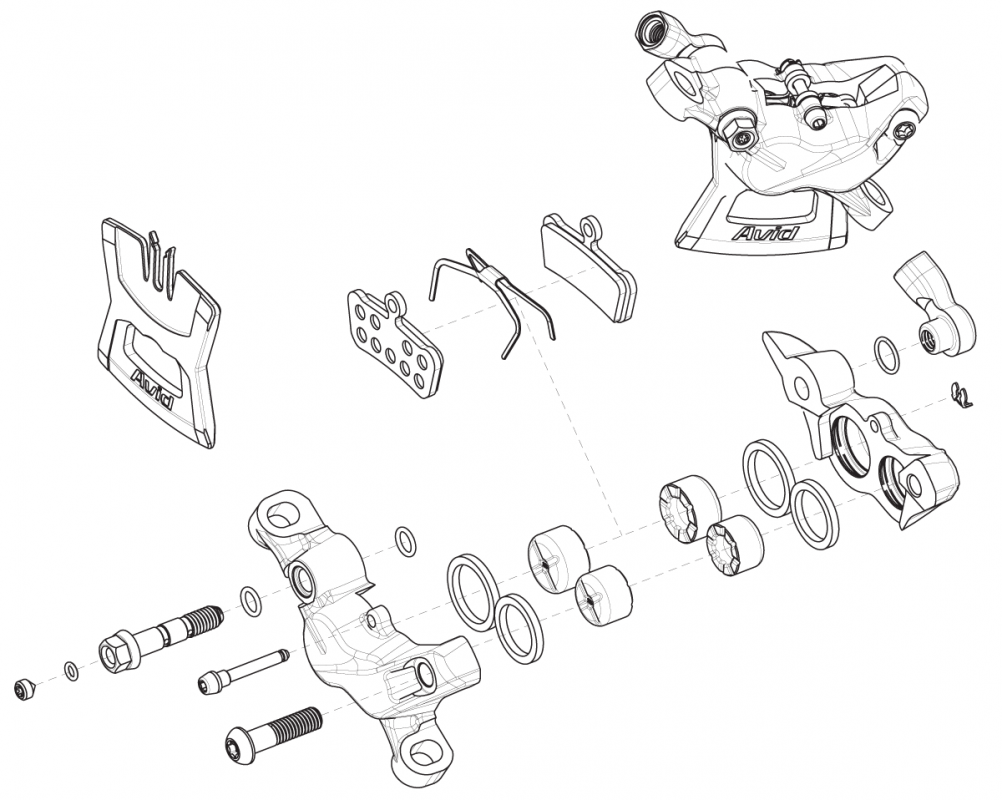 I took this chance to clean out and organize all of my hydraulic service tools. Might as well, eh? 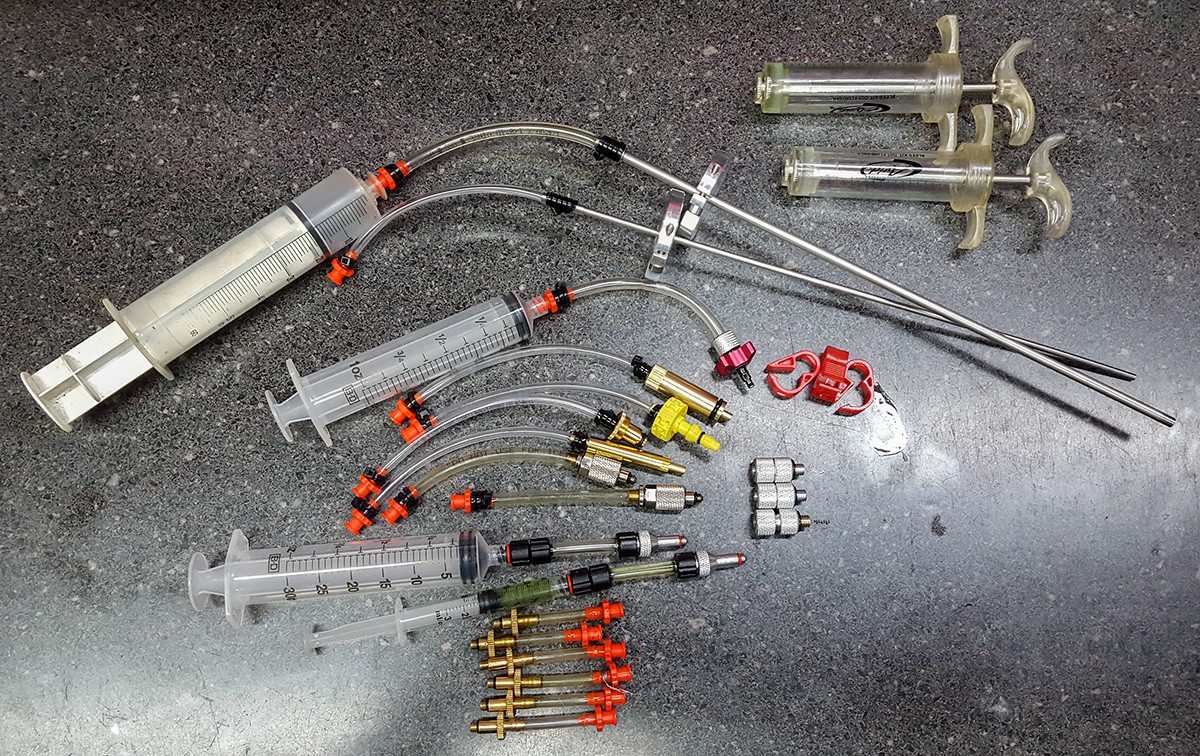 It turns out that leaving the mineral oil in the system for 3.5 months was a bad idea. I finally got to the rebuild for a new bike.

The master and slave pistons were locked solid. I had to work hard to get the parts all separated.

Here’s what the resovior bladder looked like with just one side exposed to mineral oil, almost twice as big. Wow. 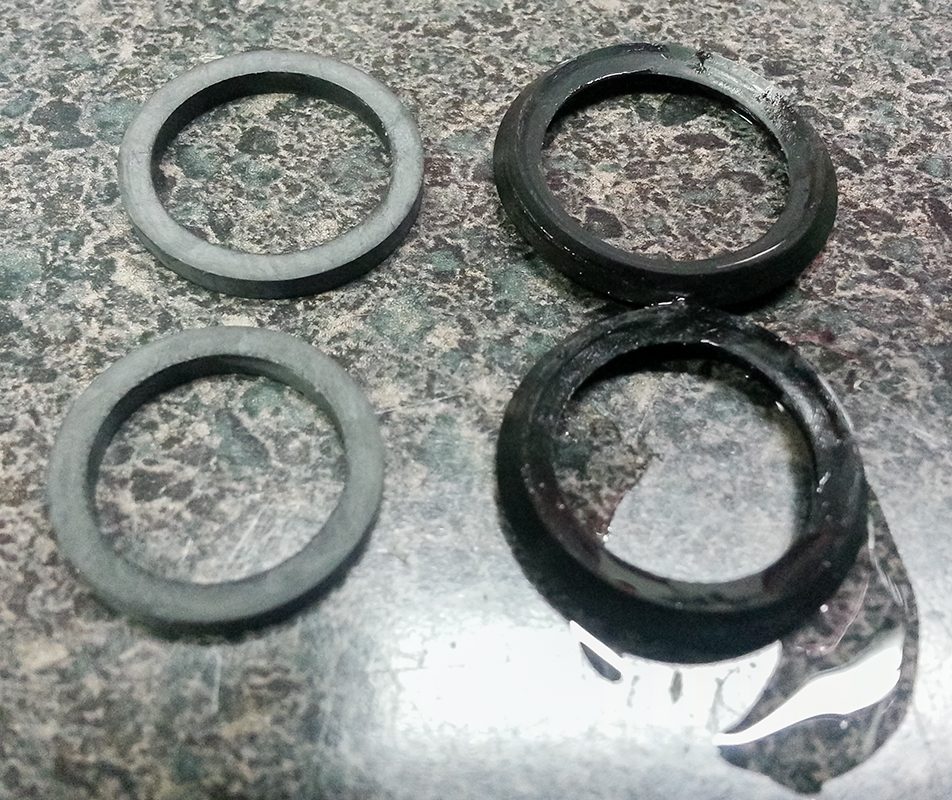