Anybody that knows me can attest to my hatred of the ‘old school’. I’m not talking about doing a massive front-side boneless one or a huge g-turn, a miami hopper or a simple ally oop. I’m talking about old school technology and peoples concepts that this garbage was somehow better than what we have today or will have tomorrow.

Skate, bike, moto. We are constantly bombarded with lore about the great old garbage that people used to use. What? It’s just not like that folks. Brakes have only gotten better over the years no matter what you have them on. Tires and wheels? It’s sick the difference a few years have made. Name one moto girl that wants to trade in her EFI and CDI for carbs and points? Never. The cost for current gear is so much lower and the quality is so much greater than anything made ‘back in the day’. Then add the cost that old junk is now collectable for some reason, oy, don’t get me started.

Right now in San Francisco, the youth fashion capital of the known universe, bikes are big. Big fashion. While some hipster boys and girls are still desperately hanging onto the ‘fixie’ or ‘track’ esthetic, many people are moving on to bigger and ‘better’ things. A new fashion bike of choice has emerged. I call them ‘shitzies’. Others will call them randonneur bikes, ‘old school’ road bikes, or ‘classic’ touring bikes. Essentially, any of the crap that Rivendell Bike Works (www.rivbike.com) still produces or aspires to. Whatever they want call them, they are garbage with a capital CRAP. Garbage because in most cases these rolling hulks end up costing far more, are much heavier, and work far worse than anything that could be bought for full retail at a local bicycle shop for under $800.

Style. they say. It’s about style. Bullshit. Slapping a brooks saddle on a huffy doesn’t give you style. Style isn’t stuffing a leather pouch into the rattrap of you old hoopty. It’s all so stupid and dishonest. Style in a bike rarely has anything to do with copying what all the others are doing or recreating something from an old magazine. Style is you for you. Style in it’s purest form is easy and style is easy to get with current goods that are easily modified or customized. It’s all there only now it’s really really good stuff and really really cheap.

Just copying something is fine if you don’t care about what I do. Really. Just make sure to copy something that works and is cheap. Really. Riding around on a $8k Rivendell doesn’t say OG so much as asshat. Buy a cheap hydroformed aluminum vunderbike and then ride the pants off it.

Here’s a perfect case in point, the old school bike shoe. I found this little gem and a bunch more at a hipster shop in the Mission. These are selling for top dollar so that the kids can complete their ‘look’. Stupid? Yes. I’ve used these things. Way back before clipless pedals became widely available. They are probably the most dangerous single piece of hardware you could use on a bicycle. They should be outlawed, not idolized. 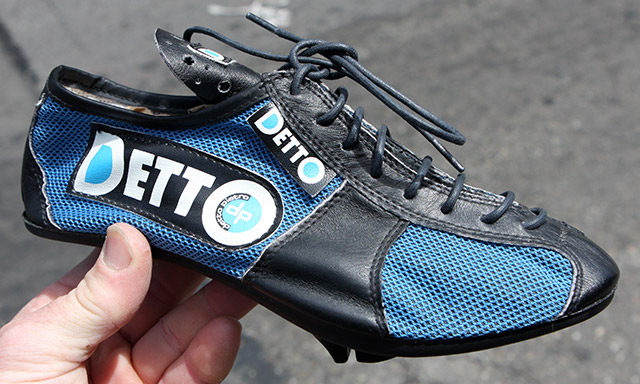 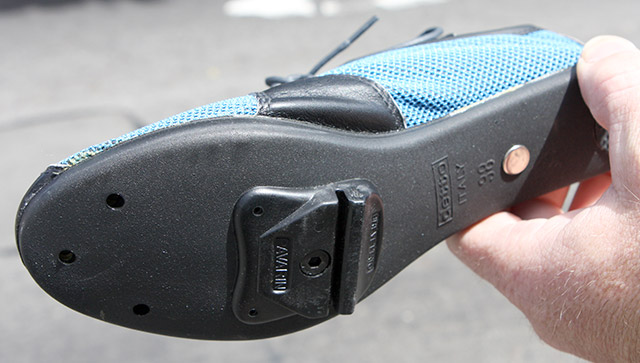 The evil here is this ‘classic’ rail cleat. It drops over the back rail of the quill pedal and locks the foot in place when the straps are tightened. If something goes wrong, like a crash or the need to put a food down, you must manually release your foot via the strap. OMFG! I’ve crashed a lot and I’ve never been able to think of anything other than how fast my face hit the ground. Add to that a bicycle that is mechanically fastend to you during the crash and you are wrecked. It’s like the devil herself came to earth just to kill cyclists. Don’t ever use these, please!

You can keep the old school. I’m about tomorrow. It’s a much better and cheaper place. I keep wondering when the cool kids are going to start being cool because their choices are reasoned rather than wacky.