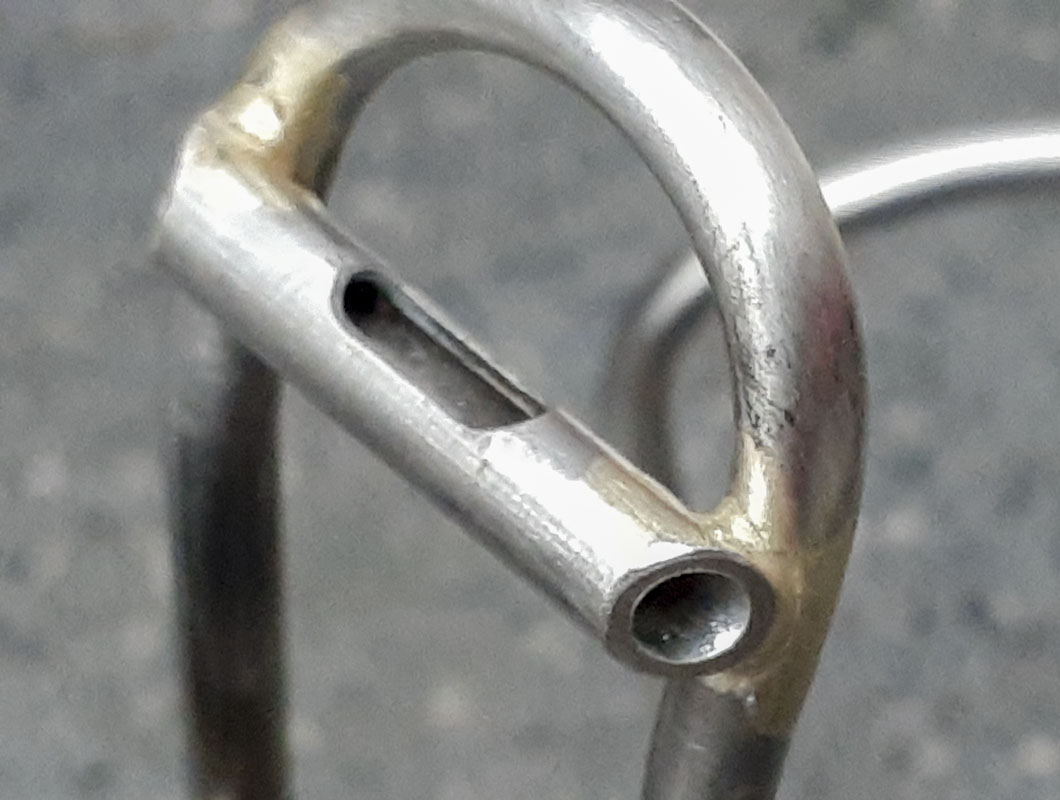 In the past 5 years, I’ve been doing a lot of work with rigid forks on bikes. From klunkers to hybrids, there has been so many layers of the onion that have been pulled back within the full rigid framework. The most recent bikes, Supermarine Spitfire and TIE Advanced X1, and the testing on the Airspeeder ahead of the TIE, have been my most ridden bikes in the past eighteen months.

I’ve kept going back to these during COVID. Maybe I’m just getting old, or bored, or both. The rigid platform seems to liven things up. I’m old (51) and riding full rigid is far from easy. It hurts. Going fast is hard. Genuinely difficult trail and speeds become seriously dangerous. This has been the current road on the journey. Not all of it will be easy. There will be struggle. There is something to riding this format, it is raw and makes a real connection to what is happening. Just a tiny shift of body weight from optimum results in a huge degradation in performance. It’s like playing the chessmaster. Small mistakes have huge consequences. The margin of error is very small.

Klunkers and hybrids have two important things in common that come together with today’s argument; rigid forks and the use of water bottles. For several decades of riding, water bottles were just a thing for road bikes. On the dirt, for serious riding, a bladder pack has really been the only option. In that case, we need more water, we need spares and tubes, we need clothes and food. On the Klunker and Hybrid I look for a different experience and this means limited gear and water on the bike. There is a lighter feel to this.

Riding a rigid bike doesn’t mean I want to go on a shitty ride. I want to rip sick trail. I want to go fast everywhere and especially on challenging narrow trail. I’ve been developing technique and ways of doing this with the rigid forks and my frame designs. There is a way to do this. It’s hard.

This brings us to a classic problem but it’s suddenly a epidemic, tossing of water bottles. In this scheme, it simply doesn’t matter if you think you’re using the greatest water bottle cage in the world, it’s going to get tossed. Riding hard and fast off road with the rigid fork seems to be the mix that makes this happen, but few are doing this to find out. Few folk really ride rigid very hard.

This is not acceptable and I view it as a complete failure. If I’m on a ride, I expect to have water. It suddenly disappear is ruinous. I might as well have a broken chain or a cracked tube. I don’t need super quick access to water… but I NEED it to be there when I stop for water.

So, I’ve been working on this. for a while, I’ve been using Velcro straps to hold the bottle in place. It was a mess but it worked.  The velcor would slowly get worn and dirty and eventually, bottles would get lost again. I was frustrated. I tried a number of tying methods with the Velcro but the long term problems always came up. 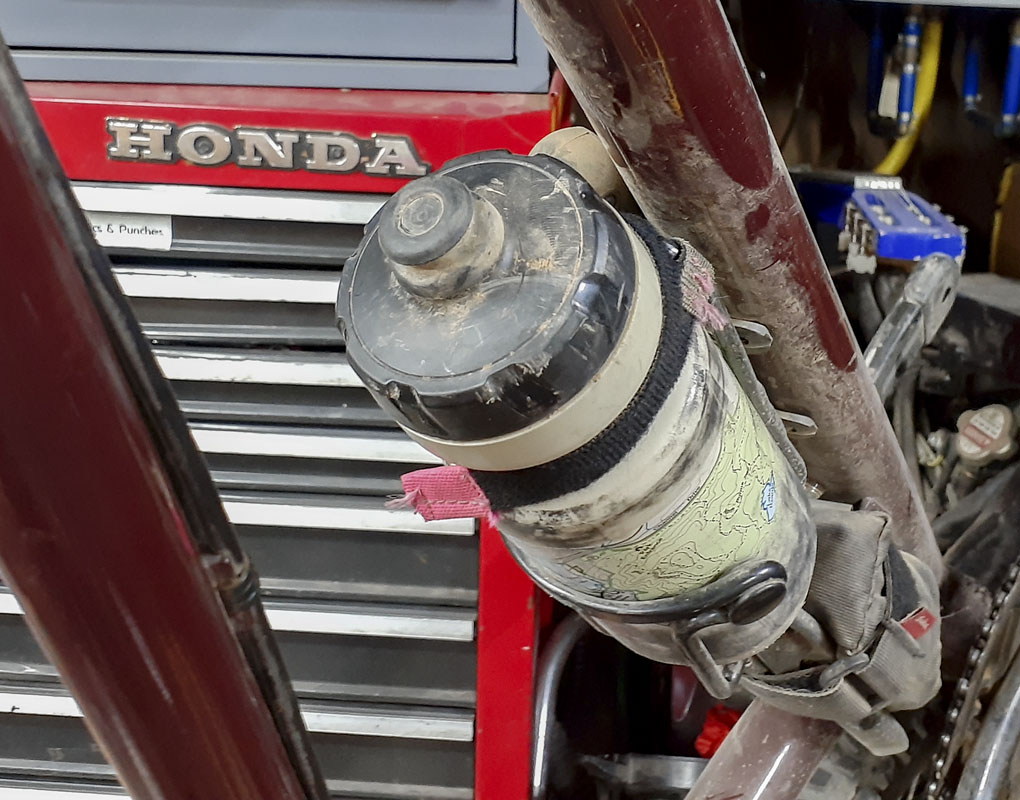 When the TIE testing began I started looking at other cage options. I dried a number of cages to see if this was just a problem with not having the right product. Nothing was really working in any meaningful way.

It was time to get into the weeds on water bottle cages. I wasn’t looking to reinvent the wheel, I wanted to do the least that I could do to solve the problem. I struggled with how. I came on something that would be clean, a stainless steel King Cage with a tube silver braised (56%) to it to hold a bungee. I love Ron’s cages and wanted to build on what he has done so well. A tug was added to the 1/8″ bungee to make it easy to get at the band when on the trail with gloves on.

Of course, this was a quick after work project and refinements were realized and the design modified for the next version. My welder isn’t at my house so to move this through quick on Friday, I cut the tube at work and did some loose fit up at home. Then I baized it in the basement. Brazing the tube to the cage was super hard. I’m not great at brazing and the torch I was using was about 5x too large for what I needed to do. The tubes heat up so fast. It’s better to braze this in place as I can easily change things once I refine my idea.

If ease of access while riding is needed, the bungee should be able to be left unhooked. This isn’t very important to me but it’s worth considering.

It’s looking good in the basement. Hopefully, it proves itself on the rough trail. Smoke from fires and a dangerous AQI may impede a Saturday ride but I have high hopes for a solution that builds from this. 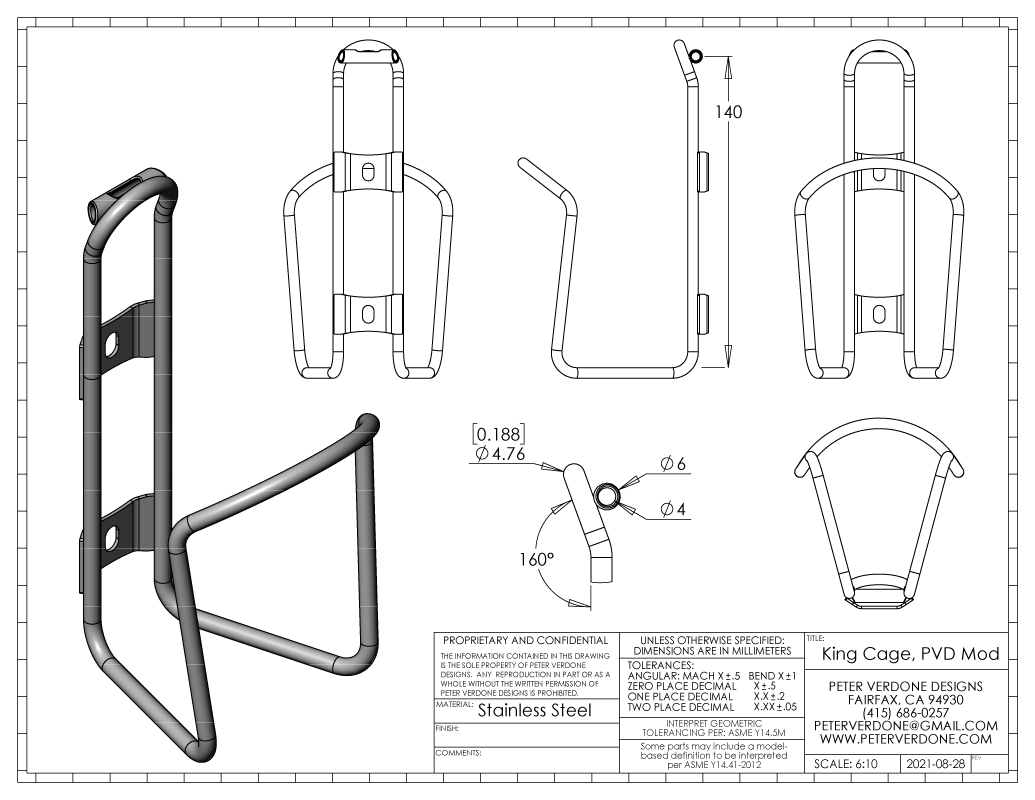 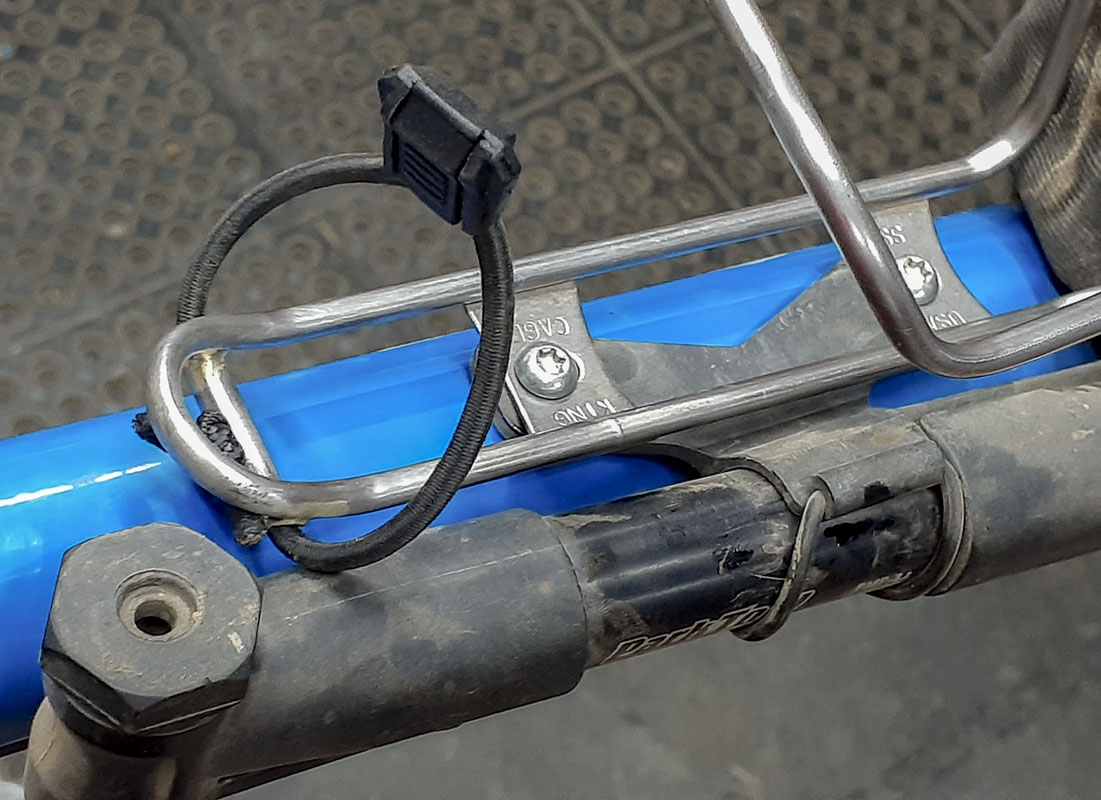 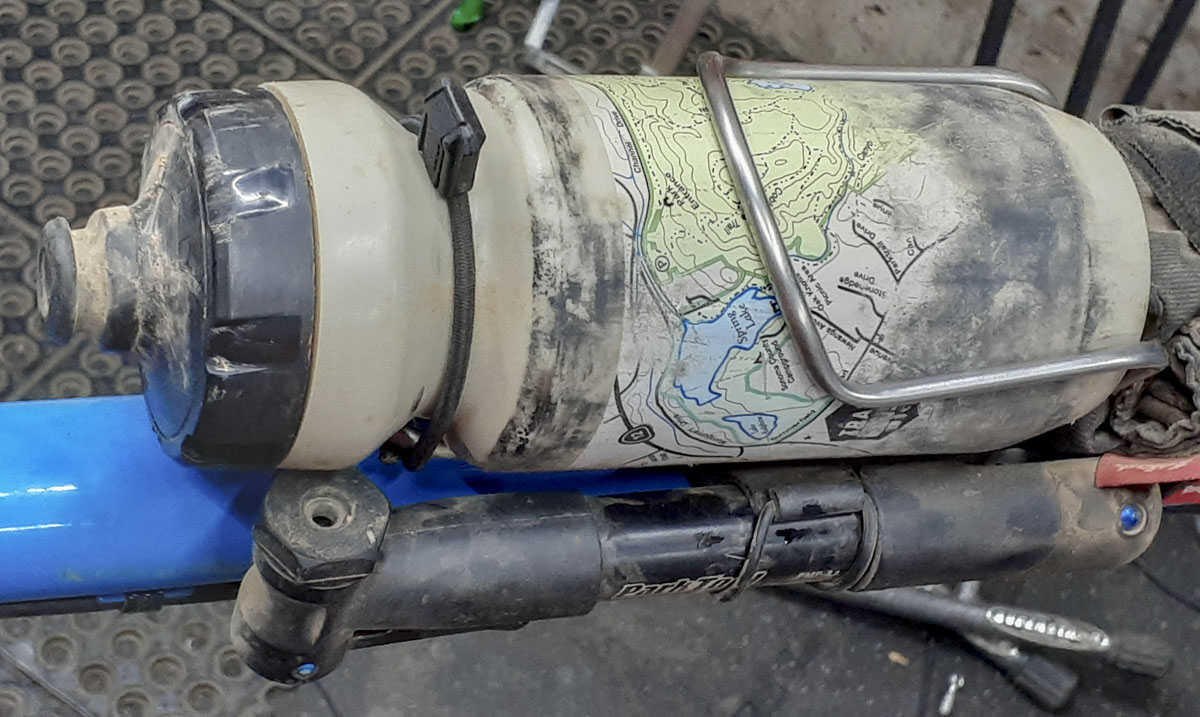 The new bungee was far better than expected. So much better than the Velcro solutions. While it could still be used around the waist of the bottle, I found that it was far simpler during the ride, quicker, and more convenient to just loop over the nipple of the bottle for retention. The bottle was super solid and the tug really made it easy to work with. This probably works to work against the ejection vectors even more than around the waist.

This, of course, points to an even simpler solution than I did with the baized tube; just tie the bungee and tug to the cage without the braised section. I’m going to look at that next but still complicate it some by trying to keep the ends of the bungee spread apart at the cage. I think that some fancy knots and a plastic spacer could do the trick.

This is great progress. 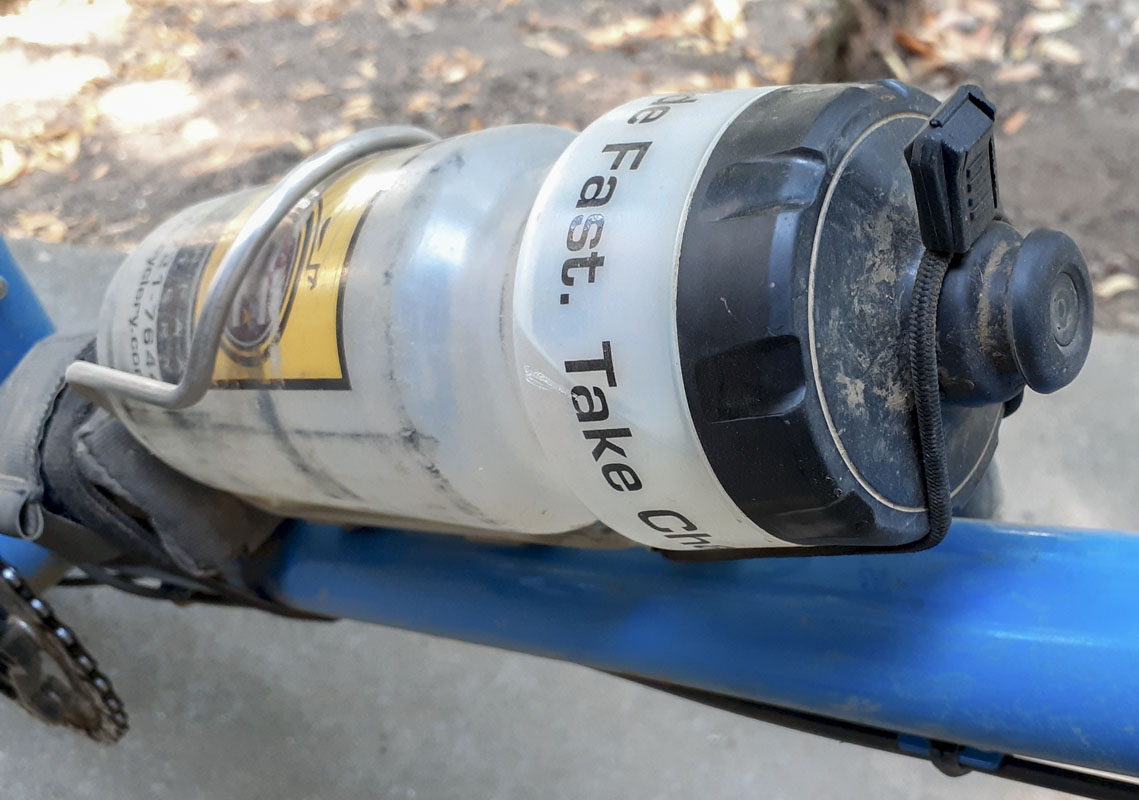 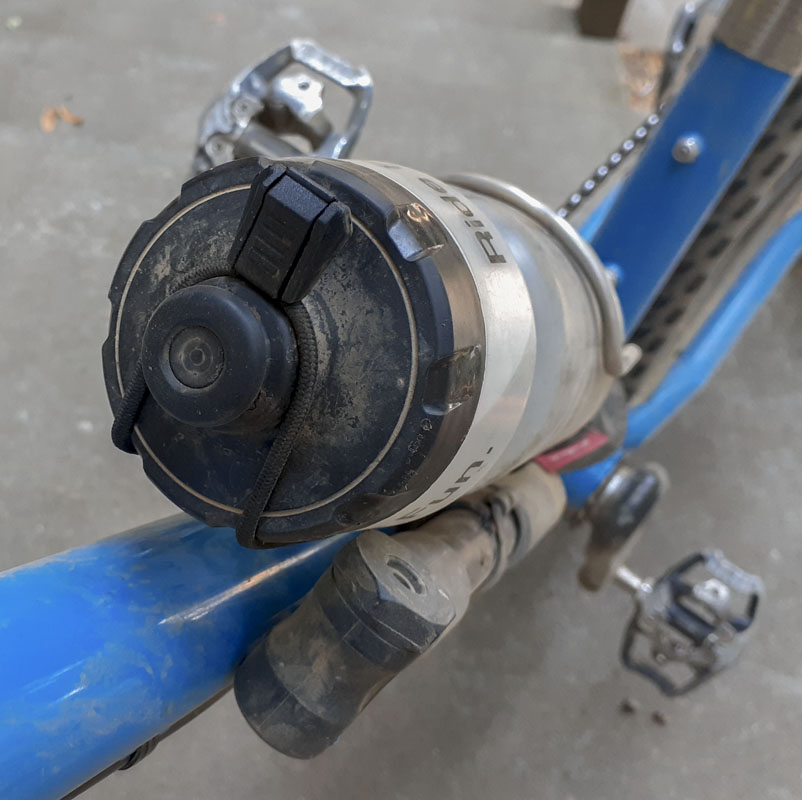