I haven’t put much focus on shooting rifle in a while. My wrist has healed enough so that I can ride mountain bikes properly again and after some truly tragic incidents, ammunition costs had skyrocketed. My preferred cartridge, 22LR had shot up from $0.06 to $0.40 per round (if it could even be found). It’s not that 22LR is an incredibly accurate, clean, or flat round. It’s simply the incredibly low cost and ease of shooting that makes it so nice. I can also use it in close by indoor ranges, giving me off hand shooting time.

Ammunition costs and availability have improved since then. 22LR still isn’t super cheap, now down to around $0.25 per round. That round is not worth shooting at the rifle range when there are options just a little more expensive but shoot so much better. Remington .223 is one of the most attractive rounds on the market right now. So incredibly close in specification to the 5.56mm NATO field and assault rifle round used by the US military, the .223 round is found on most civilian AR-15s. As a result, the .223 round is relatively inexpensive and widely available, often priced in the low $0.30 per round range.

I wanted to try to capture some of the Ruger’s fun in a .223 rifle that would be great for shooting 100-200 yards. In the Bay Area, were mostly shooting out to one hundred yards with only a few options for 200-300 yards. A larger round than .308 is simply overkill and wildly expensive. 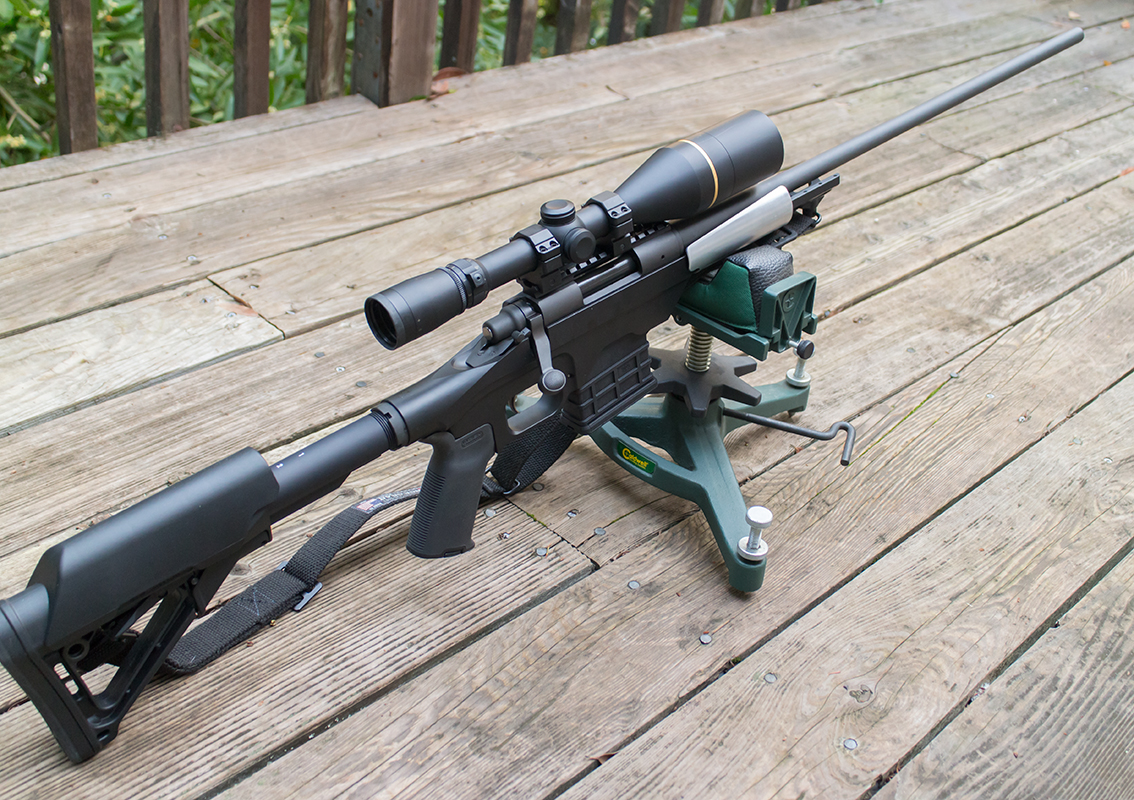 From there I went custom. I traded some parts over from other rifles and got them new parts that suited them better and ordered a few of the right parts for the project. That’s one of the nice things about focusing on a AR-15/Remington 700 inventory.

I chose the Remington 700 SA action for one simple reason, it is the standard, almost universal, action in the bolt-action market. Several actions compete with it and I’m sure that some are even better (Surgeon). Even those actions are based on the 700 so it’s a great place to start. What I like about the 700 is that so many products and services are available for the Remington 700 that it makes every idea or modification easier. It’s also a dam fine action, so whatever. It’s also pretty cheap to get into, $558 for a complete rifle.

The stock stock (ha!) on this rifle is pretty horrible. I like some of the traditional Monte Carlo stocks (there’s a really cool Mossberg 4X4 stock) but the ones that I do like are pretty high end and custom fit. I figure going to chassis system would be a good direction from the start. The primary drivers for this are the pistol grip, easy LOP adjustment, an a detachable magazine. Shopping the many alternatives, I chose the MDT LSS Chassis. I was tempted by a few of the other chassis options like the Cadex OT Core but one factor tipped the scales in the LSS’s favor, weight. The other options are really cool. They are fancy and covered in gingerbread and options but I wanted a gun that I could shoot off hand and be usable in more ways than just bench shooting.
After all has been said and done, the Cadex chassis is still looking to be a great choice and I’m not 100% convinced that I made the right choice. Many issues with the LSS exist with the OT Core but other issues are sorted. Most noticeably the fore end tube. I like the Cadex stuff so much.

The LSS Chassis brings the receiver extension threads further back than an AR-15 would have. Still looking for more, I made the choice on a special, longer, receiver extension. The Vltor RE-A5 (mil-spec) receiver extension is very well made, like most tubes on the market. It’s different in an important way, it’s about 19mm longer than the standard AR-15 CAR tube. This gives me longer LOP options for using this rifle as a….rifle. It costs a little extra but worth it when super short LOPs aren’t critical. The combination of the LSS Stock with the Vltor RE-A5 receiver extension and the Magpul CTR butt stock, and the MagPul CTR Recoil Pad .55″ produce a length of pull of 11.375” (290mm) to 15.275” (388mm). The RE-A5 extension allows changes in 0.650” increments. That kind of range allows comfortable use of this rifle for a small child to a large adult.

The Magpul CTR (mil-spec) butt stock is really nice. It locks into place well enough and has riser options for improved cheek weld. I ended up with the tall 3/4” riser to meet my scope’s line of sight. Since I’m using a sling, the QD lugs on the stock are helpful and very well done. Other Magpul butt stocks like the MOE SL lock very firmly into position but they don’t as quickly as the CTR. We can’t have everything. I also have a MagPul CTR Recoil Pad .55″.

One of the problems with the LSS chassis is front hand placement. It seems that that was something completely forgotten in it’s design. Holding the rifle with the front hand is not very ergonomically friendly. Fingers touch the barrell, the support is quite high, the magwell ends up being the only good choice but almost by accident. I think that they should produce a part for the kit to solve this. I designed my own hand guard that makes a major difference holding the gun.

I went through two prototypes initially designing this. The first prototype was based on some bad assumptions that once mounted, were apparent. I didn’t have the action and barrel in hand and figured the wrong barrel height from the chassis. Once the parts went together, I had to start hacking. I corrected for this on the second round. There’s a lot more room for improvement. It will be longer in both directions next time. I may extend the tube to the front of the chassis and mount the sling off it as well as things get a bit hung up when the rifle is supported. I may use a thermoplastic like Kydex to maximize the value of the part. 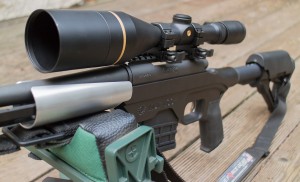 Traditional gunsmithing would have the recoil lug bedded solidly by fiberglass or epoxy. I’ve actually seen people on the internet bedding this way on the LSS chassis and I wonder what planet they live on. On an aluminum chassis, it’s done differently. I made a stainless steel spacer block to take up the difference in space between the recoil lug and the pocket in the chassis. The addition of a 0.010″ shim produced a very tight fit. There is no room at all for the barrel to move in the stock fore or aft. In fact, the fit is so snug it takes some force (not too much) to get the two parts together. Solid! 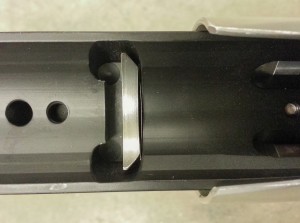 This is a current production Remington 700. It comes with a decent X-mark Pro trigger. The trigger provides some amount of adjustment while in the stock for the trigger pull weight. More adjustment is possible when the stock is removed. Sheer engagement and over-travel. By voiding the warranty, another screw is revealed that gives even more pull weight adjustment. My trigger arrived with 5 lbs of pull. By turning a few small set screws, the pull was reduced to 2.5 lbs. The rifle is fairly usable like this for target shooting but should be reduced when I get a chance to focus on it more. For hunting (which I don’t do) the trigger would be kept above 3.5 lbs to prevent accidental fires. 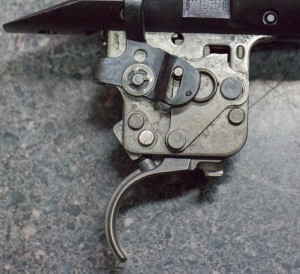 Because of the large 50mm diameter of my scope and the need to pull the scope back as far as possible, I needed to raise the scope height to 1.8125″. Most of the mounting problems I had were due to the large end diameter and short length of the scope. I even had to machine the front of the optics rail to clear the end of the scope. I will be looking into set back rings.

It’s important to me that a rifle have a sling. A QD makes things easy. The LSS Chassis comes with a basic sling mount and set back from the front of the chassis quite a bit. I believe it should laid out differently. I purchased a Magpul mount and machined it flush. I then tapped some new threads for it close to the end of the spar. This was clean and an improvement to what I would otherwise have had. 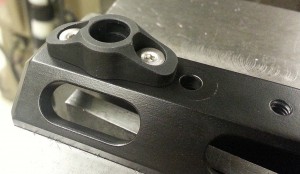 The original stock and metal weigh 918 grams. The LSS Chassis weighs 785 grams but that’s without butt stock, extension nut, grip, magazine for making a fair comparison. I believe that the LSS stock could have been produced in the 550 gram range with just a bit more machining time. I wish that the time had been put in for this as it is a major weakness in it’s execution. 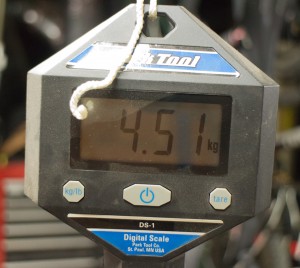 While this may be a fancy rifle in presence, it is to be a cheap rifle to shoot. I’ll be shooting whatever 0.223″/5.56mm  55 gr. round through it that I can find cheap. FTW! Tell me about all the problems I’m going to have doing this in a .22 cal. 7oo short action bolt rifle…please.

M855 is the current NATO round and is 62 grain. A little heavier than what this barrel will like most but it’s one of the most common rounds I will be seeing other than the M193. I’ll get some of this when I get a 9″:1 barrel.

*I’ll be cutting an inch or two off the barrel and threading the end 1/2-28 x 0.550-0.600″ for a compensator/brake. I don’t want to reduce my exit velocity but going from 24″ to 22″ or 21″ shouldn’t be the end of the world at sub-300 yards. What it will do is eliminate a gain in weight or even reduce the weight of the front of the gun after the comp/brake is put on. It will also be slightly easier to move around and nicer to shoot.

*Bolt knob. Shooting this rifle over the course of an afternoon leaves my thumb tender. Pushing lots of lead through and cycling the action so many times makes this noticeable. I’ll looking into making something nice. I’d like to figure out a different and better approach than what is commonly done.

*AR-15 magazine adapter. I figure that I’ll give this a try. Bottom metal adapters exist when using the Monte Carlo stocks. I don’t know how well they work but it would be so nice to use small magazines. There should be a way to do that with Chassis systems. It would be nice if MDT does this before I do.