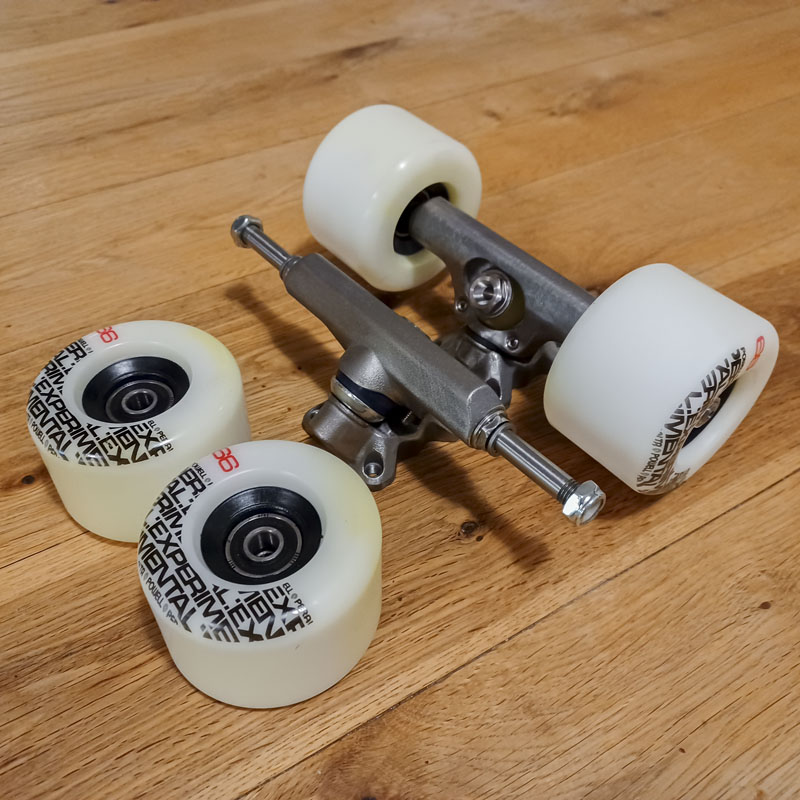 In early November, I got the new G3 skate trucks finished and mounted. This was just before a big trip to Boston, Philadelphia, and New York City. That was a great thing as I was able to log about 40 miles on the trucks.

This was a massive test in exactly the conditions that I’ve been designing around, urban travel in dense traffic and busy sidewalks. Also, all sorts of riding surfaces and grades. I was able to find cases for change in the design, enough to justify moving rapidly to a G4 re-design. 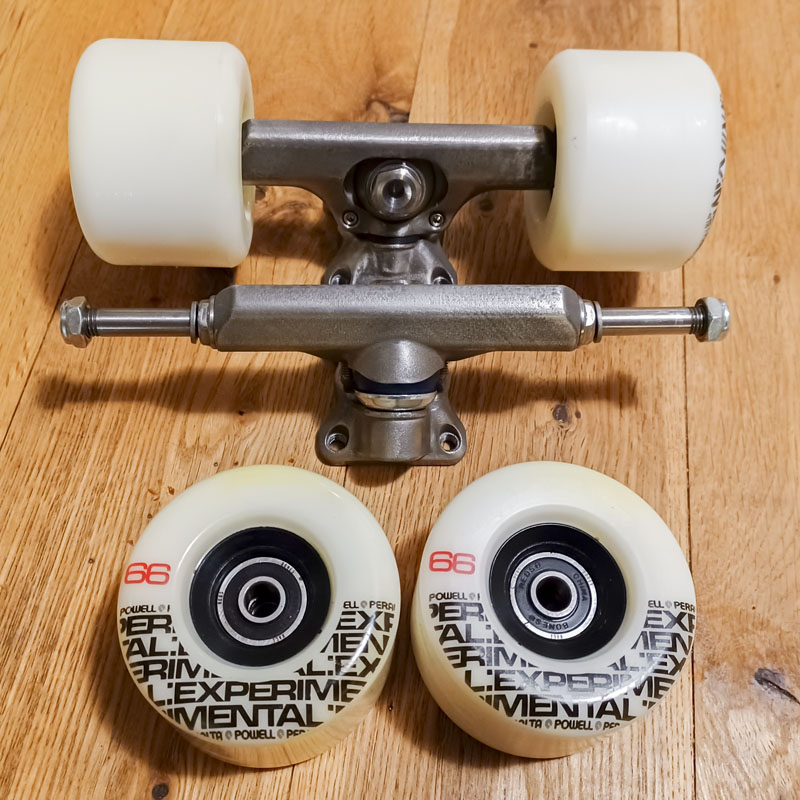 The G3 trucks had been an improvement from the G2 trucks. They turned cleaner. The kingpin was held more rigid. The improvements were paying off and I needed to advance that further.

The glaring problem with the setup was wheel size. 62-64mm diameter is just not enough for this to work well when putting real time on the board. I needed to move to 66-68mm. This would free the board up from the rolling resistance a bit more. There just aren’t any 66x40mm skate wheels on the market. What is there is just too wide and heavy. The Powel 66×46.5mm wheels are just total tanks when I want Formula 1. I worked on trying to cut down the soft wheels but that was more challenging than I had the time for so I was forced to table that for now.

Here’s the wheel I would love to find: 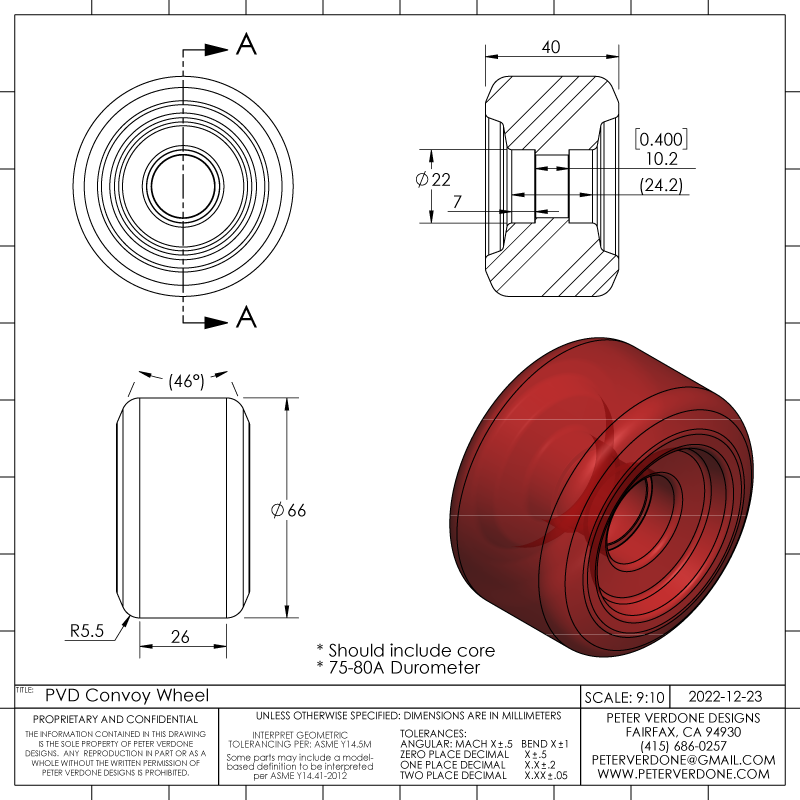 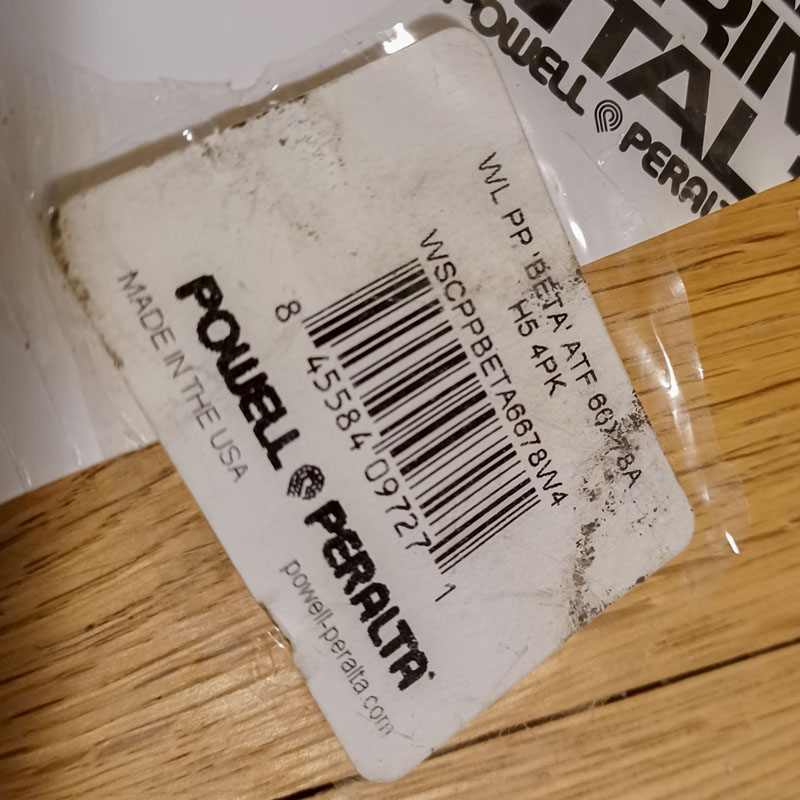 The obvious problem then is; how to keep the deck low and still be able to turn.

To combat that on G4, I steepened the steering another 5 degrees and but I lowered the truck 2 millimeters.  That would minimize the amount that the deck was raised with the wheel change, even though it was higher than before. This was to lower the board as much as I could but if I did need risers, I’d have some more space. I probably should have lowered the truck a full 6mm and ensured the use of risers but that will have to be on the next version. I’m hoping that this works. 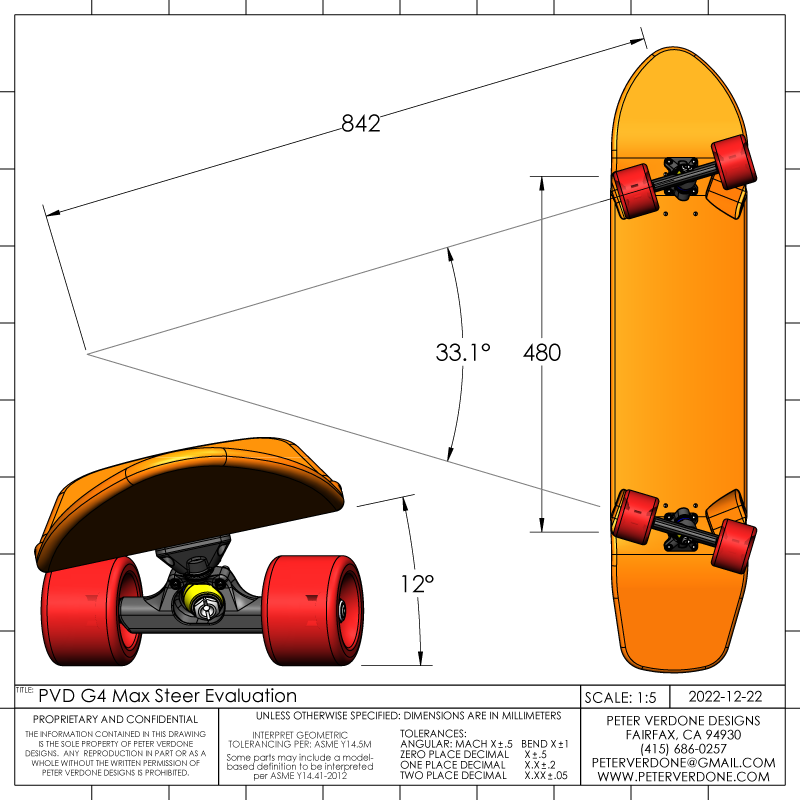 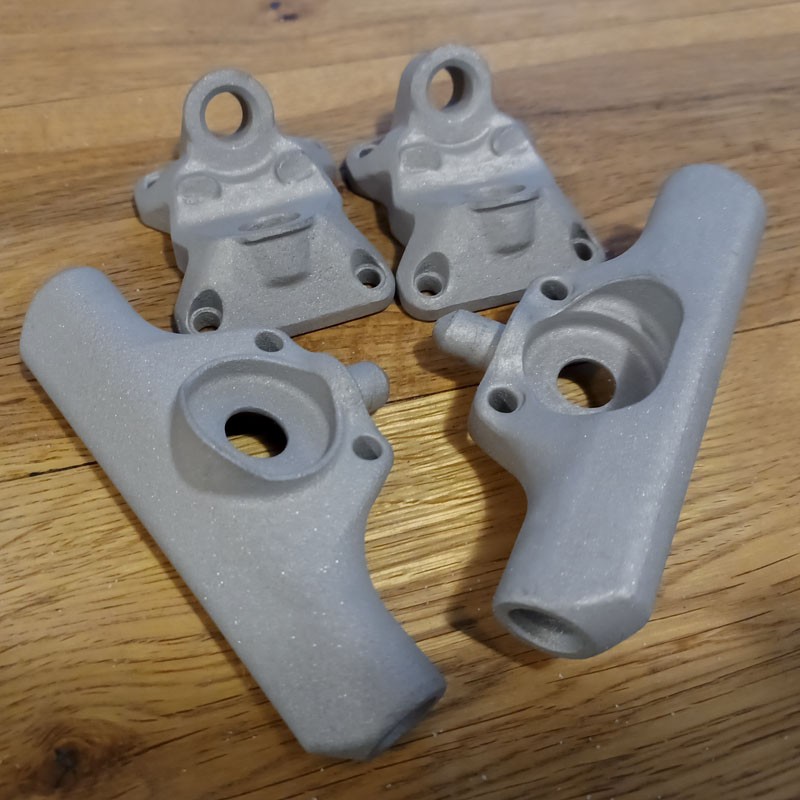 The fundamental truck geometry. With 66mm wheels, the height is 75mm under the deck. The offsets of the axle remain the same but the height and steering angle have changed. 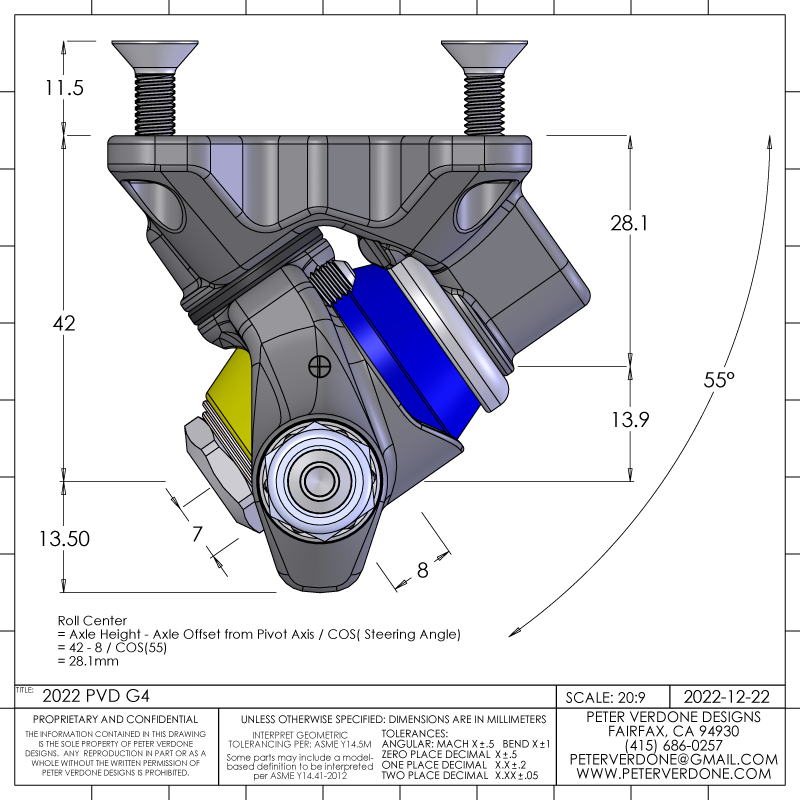 The width of the truck was brought down from the G3 trucks. 8mm to compensate for the wide Powel 66×46.5mm wheels. This keeps the overall width to wheel edge at 185mm (with Powell spacered bearings) 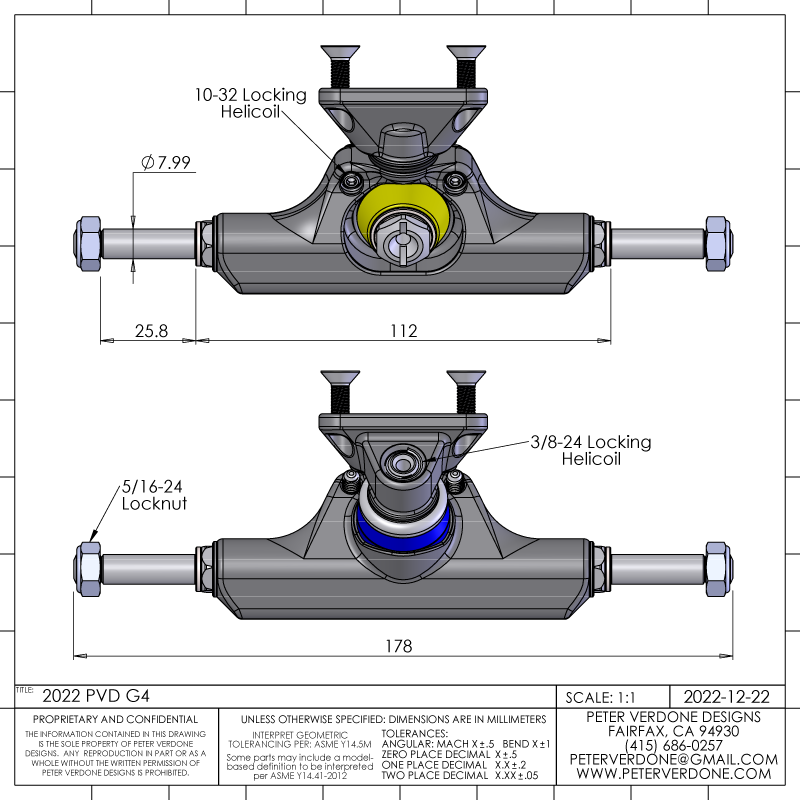 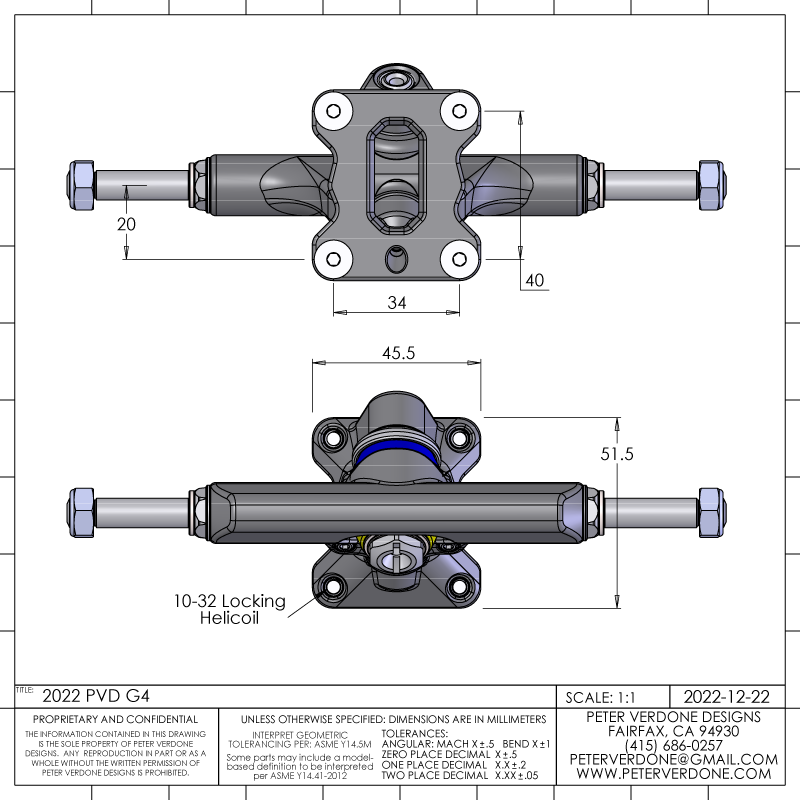 I’ve got Riptide bushings in the trucks. A 0.500″ APS Street Cone 90A top (yellow) and a 0.600″ APS Cone 85A bottom (blue). That was where I was with the G3 trucks. It was a loose setup but felt relaxed on crowded sidewalks. Not sure if it is right for the G4 but is the start. 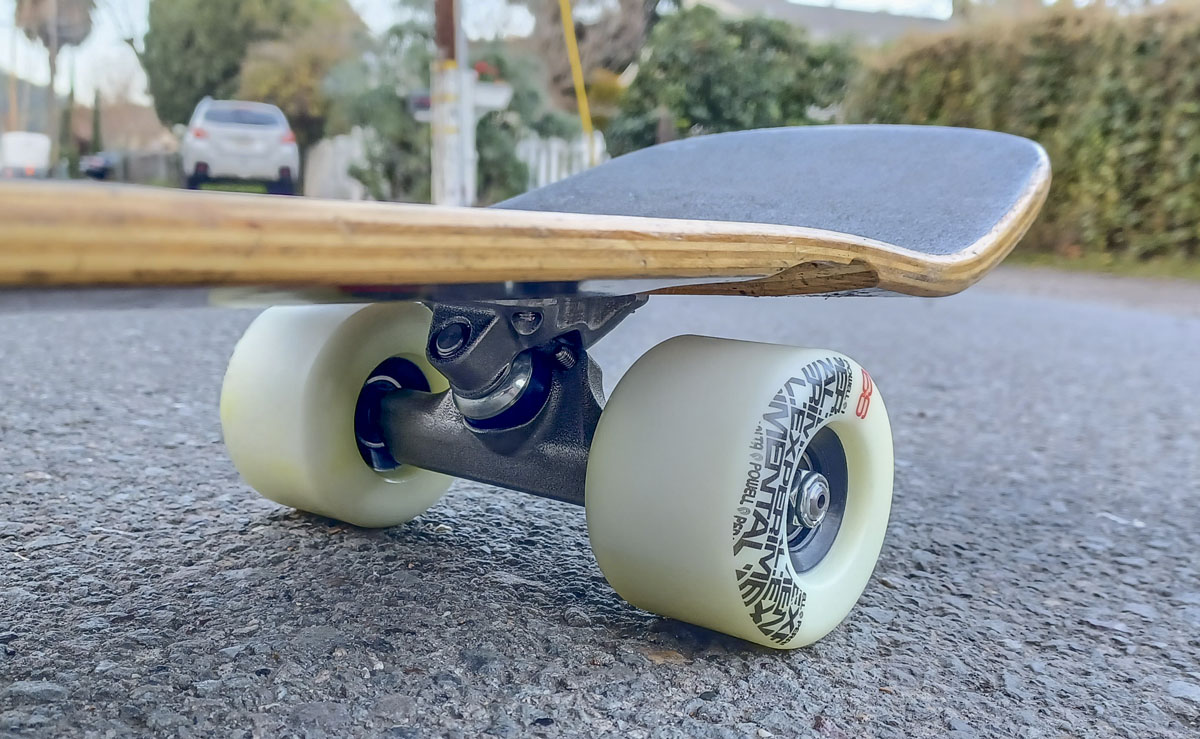 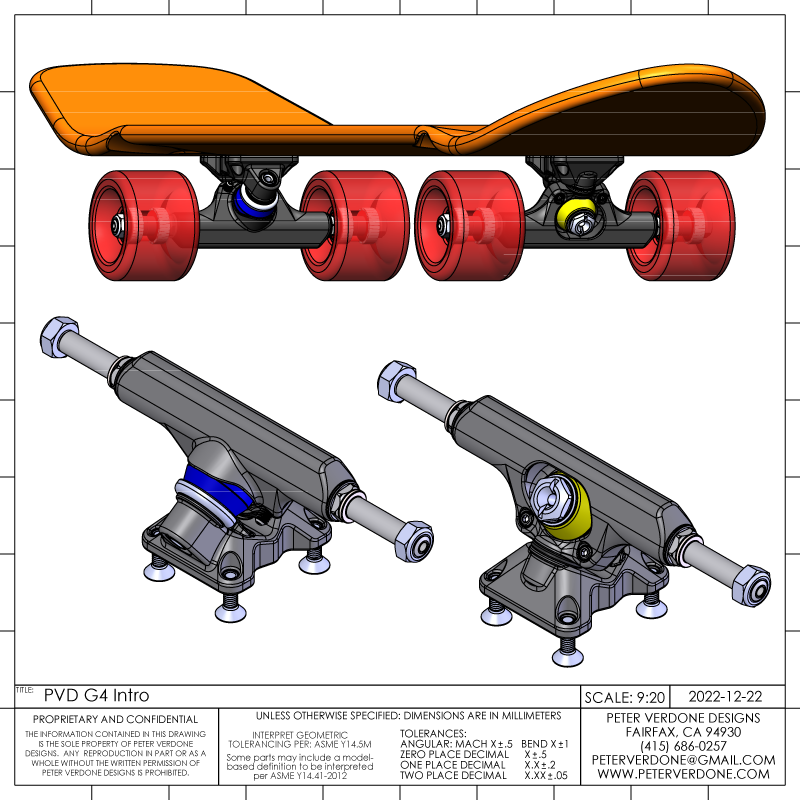 Some slight tuning to the limit screws and I was off. The board is about as low as it possibly can be with the 66mm wheels. In fact, I’m fully engaging the limits in normal use. I’m glad I steepened the steering as I really need it. Maybe I need a slight bit more. Still, it seemed that the steering that I needed was there during the entire ride. It also didn’t feel like too much…unless I really powered into something and boy, did it turn.

I’m not sure if adding a riser will be necessary but I may give that a try with 1-2mm of height just to see what more swing would do to the steering.

The 66mm wheel diameter is amazing and the board goes so much faster, smoother, and maintains speed. I wish I had had these on my trip to New York. Even with the additional heft, they are much better. A lighter wheel will be better, more on that another time.

I haven’t got a chance to clack the truck off curbs but I need to. If I can’t with the wide wheels, I may just move the support material to the board side and maximize rollover clearance.

The G4 seem to just be a finer development of the G3. No new problems. Improvements all around. They look better. They work better. Now I can start trimming some fat and developing them even further.